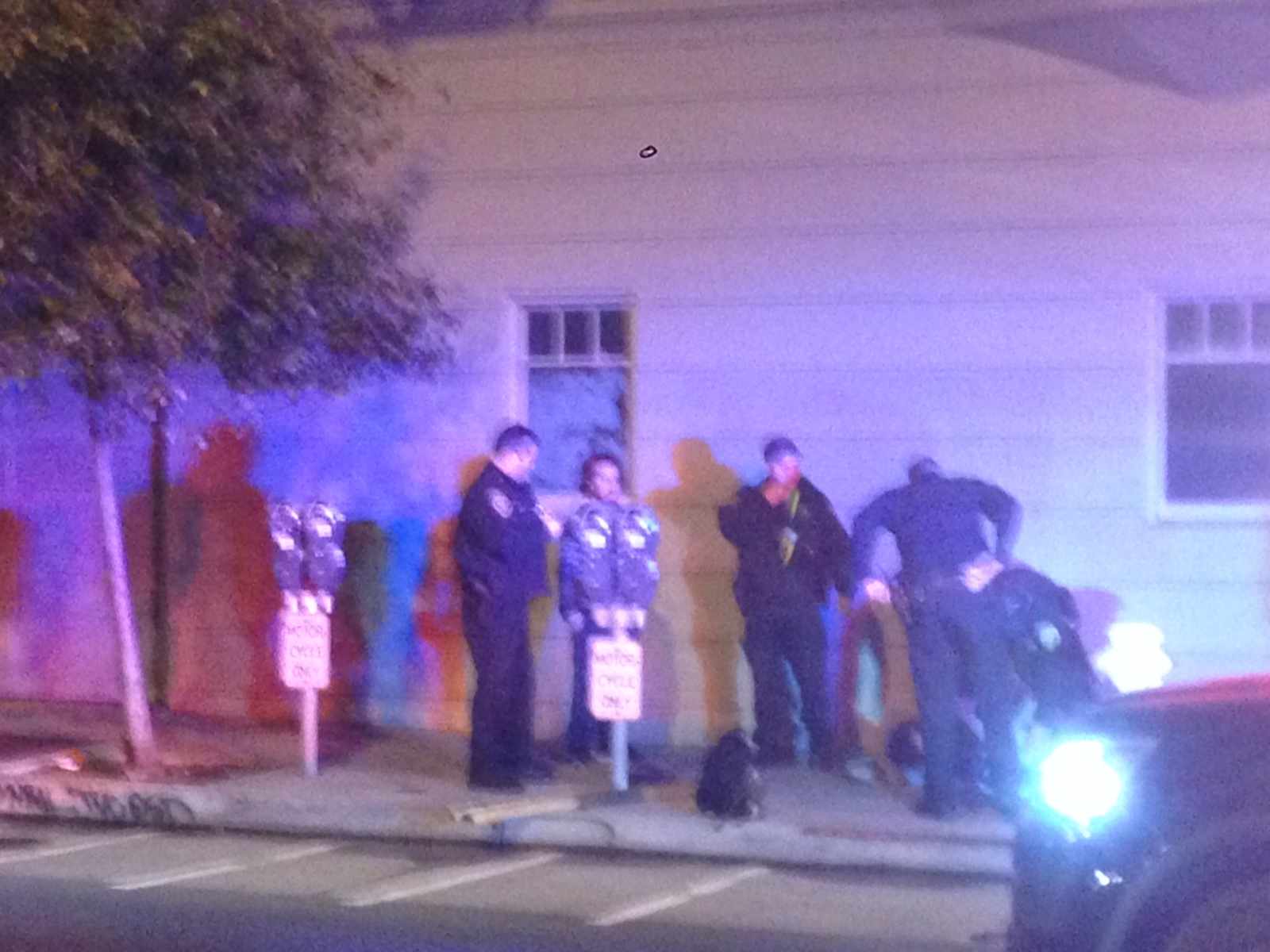 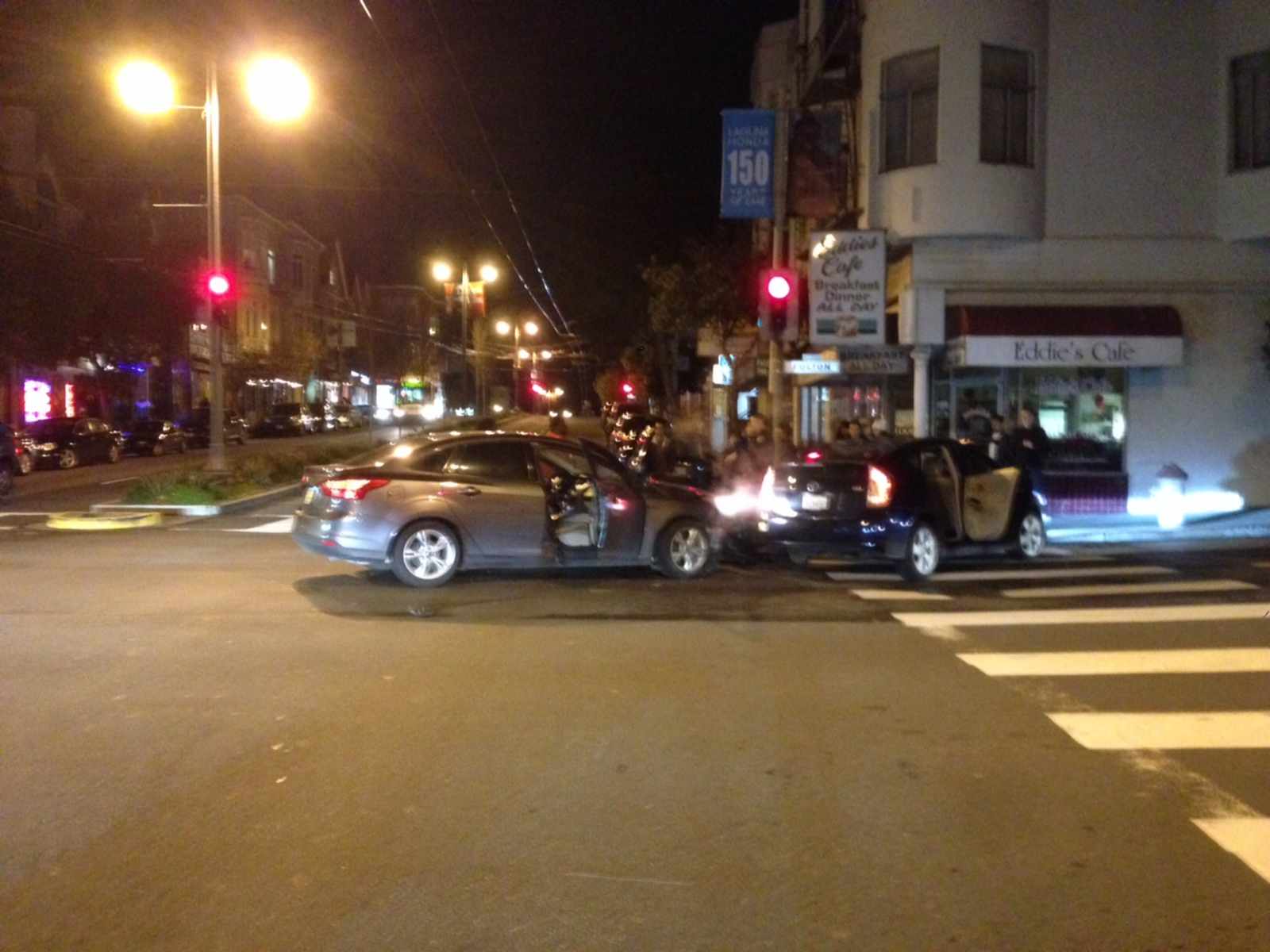 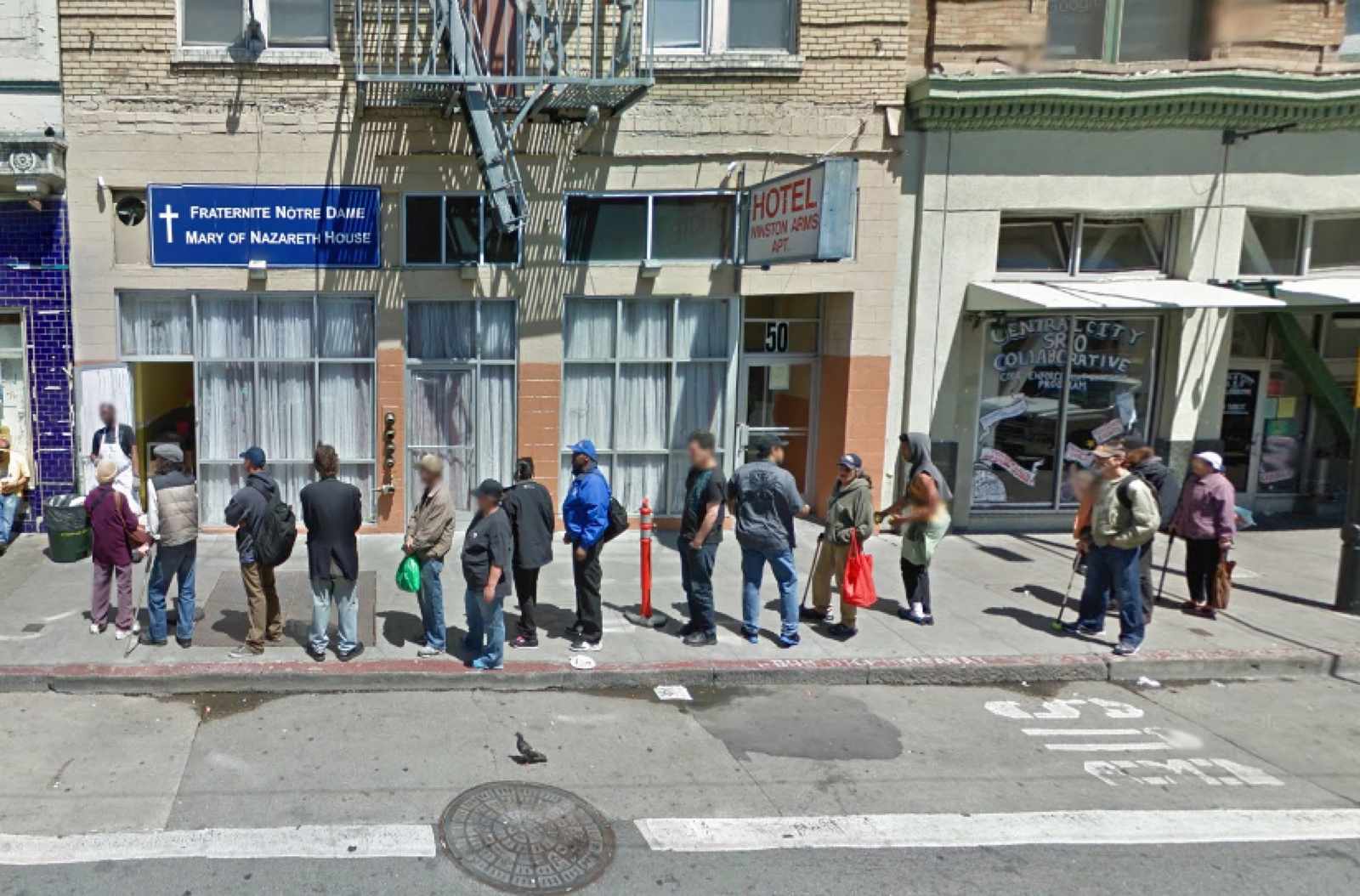 The latest controversy tearing apart the Mission District’s gilded community has come to a close as a pair of nuns have been given the green light to move their soup kitchen from the Tenderloin to the Mission. Today, the San Francisco Planning Commission voted unanimously in favor of the relocation despite some neighbors’ fears that feeding the needy would cast a “long, dark shadow” over the neighborhood.

The vote concludes a nearly year-long battle for the nuns behind the Fraternite Notre Dame Mary of Nazareth Soup Kitchen. Last February, the soup kitchen found itself functionally evicted from its Tenderloin home after the nuns’ landlord more than doubled their rent. Self-help guru Tony Robbins then stepped in, buying the nuns their own space steps away from the 16th Street BART station.

But the cash of a millionaire media star wasn’t enough to curtail the nuns’ problems. Within weeks of Robbins’ gift, a group of mostly local condo-owners came together to formally oppose the soup kitchen from moving to the Mission Street location. As Mission Local reported at the time, citing a real estate broker who worked with the nuns, “[Members of the HOA] are trying to clean up the Mission and don’t want the homeless to be there. More crime and more loitering devalues the property.”

Feeding people is contentious business in the Mission, unless it’s done within the confines of Valencia Street’s immaculate cafeterias. And those condo-owners found themselves believing that the neighborhood has become a so-called “containing zone” for the less-fortunate—a fact the relocated soup kitchen would only exasperate.

As one local put it, per Mission Local:

“Everyday it’s very frightening for people like me to get to work,” said one neighbor, adding that she has lived in the neighborhood for two years and is regularly harassed for “being white and having a decent purse.”

“The last thing I need is another 150 people to try and fight my way to down 16th to get to the BART,” the woman said, in reference to the soup kitchen’s clientele.

Fortunately for the decent purse-havers of the Mission, the French nuns of Fraternite Notre Dame Mary of Nazareth haven’t soured on their new neighbors. As they told the Chronicle, “Some people have told us they like the idea of our new soup kitchen, and that we should all do more for poor people. But some people don’t feel like that. We pray for them all.”

The San Francisco Police Department is once again going after cyclists. The announcement, made yesterday, details a department-wide plan to ticket bikers in what officials describe as high-injury areas. In an interesting twist, this time around pedestrians are also to be on the receiving end of citations.

[Officers] will cite for violations when pedestrians cross the street illegally or fail to yield to drivers who have the right of way. Bike riders will be stopped and citations issued when they fail to follow the same traffic laws that apply to motorists. All riders are reminded to always wear a helmet – those under 18 years of age must wear helmets by law. Pedestrians should cross the street only in marked crosswalks or at corners.

The victim-blaming crackdown, which is scheduled to take place today and several other days this month, is reminiscent of past efforts by Park Station Captain John Sanford to ticket cyclists on the Wiggle. His campaign led to a series of protests along the popular bicycle route, with people on bikes coming to a full and complete stop at every stop sign — jamming up traffic in the process.

The locations of today’s enforcement action are unknown, with SFPD saying only that officers had “mapped locations over the past 3 years where pedestrian and bike collisions have occurred along with the violations that led to those crashes.”

Interestingly, SFPD appears to have learned at least one thing since the widely criticized 2015 crackdown. Namely, this time around the department is going after drivers as well. “Special attention will be directed toward drivers speeding, making illegal turns, failing to stop for signs and signals, failing to yield to pedestrians in cross walks or any other dangerous violation,” the announcement clarifies.

Perhaps they realized that cyclists’ Idaho Stops didn’t cause the 18 pedestrian and cyclist deaths in 2016. 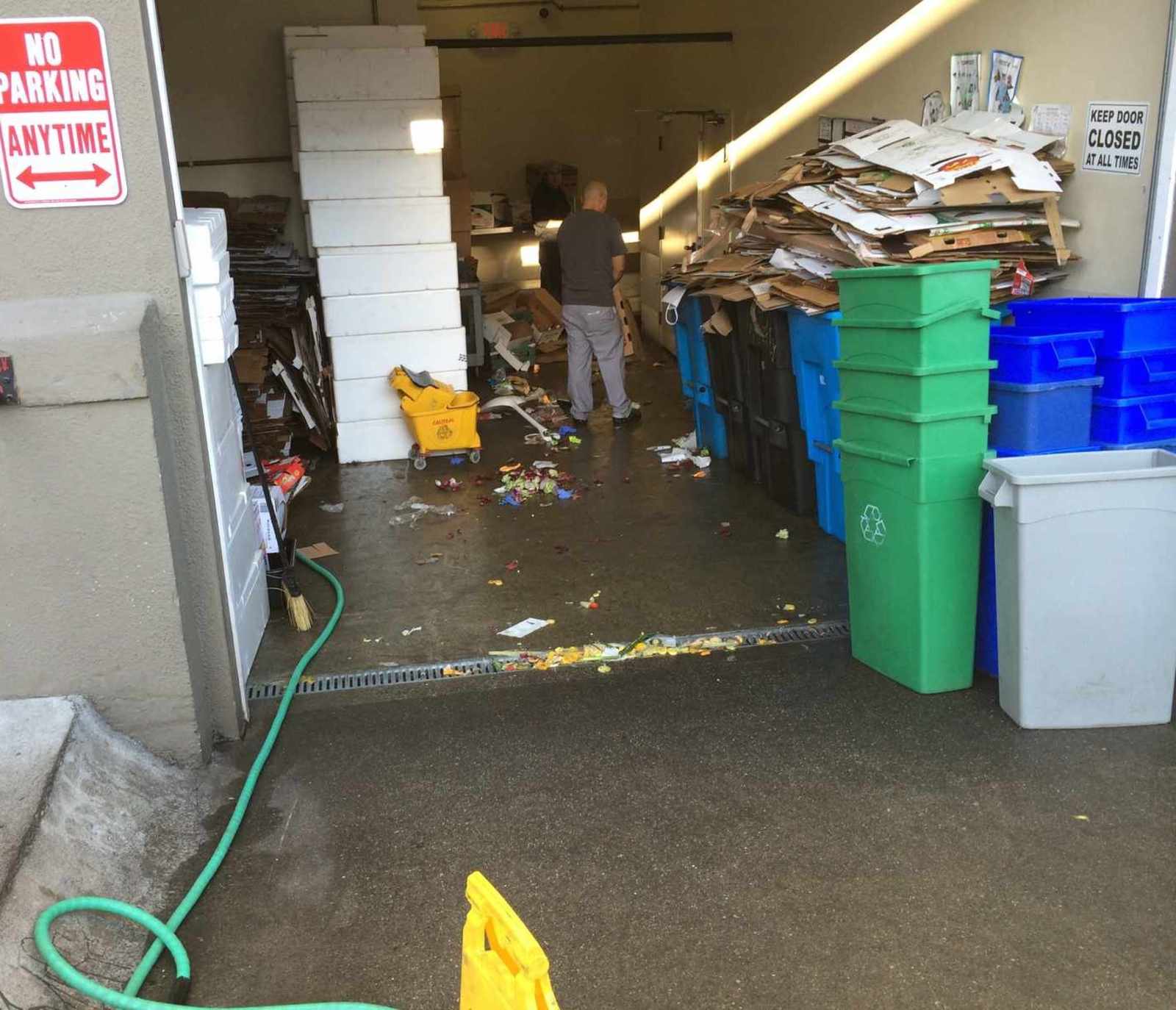 Meal-delivery startup Munchery continues to make news for all the wrong reasons. The company, which has struggled both with with food waste and losses in the millions of dollars per month, recently announced that it would layoff 30 employees from its Mission District headquarters. The Chronicle reports that the company’s new CEO, James Beriker, refused to say which positions—driver, chef, or back office—had been cut but assured the paper that things are looking up.

“We think there’s demand for our product across the whole U.S.,” Beriker told the paper. “We have no intention of making any further layoffs.”

As we previously reported, Munchery has long struggled with neighborhood relations—being called out by neighbors for idling trucks, blocking traffic, and dumping garbage on the street. What impact, if any, these layoffs will have on day-to-day company operations remains unclear.

Bloomberg was able to confirm that those let go will include members of the “company’s culinary team, research and development staff, photographers and business development employees.” What’s more, two of Munchery’s founders are set to depart this month—perhaps suggesting that Americans’ appetite for roasted half game hen isn’t as large as executives initially hoped.

“As with all journeys, there have been highs and lows, but we went through it together,” one of the departing founders, Tri Tran, wrote in an email to employees. “Our hope is that we all became better for it. […] You either win or learn, never lose.”

Among the list of things learned? Not screaming at nearby residents and managing to properly dispose of food waste are hopefully near the top. 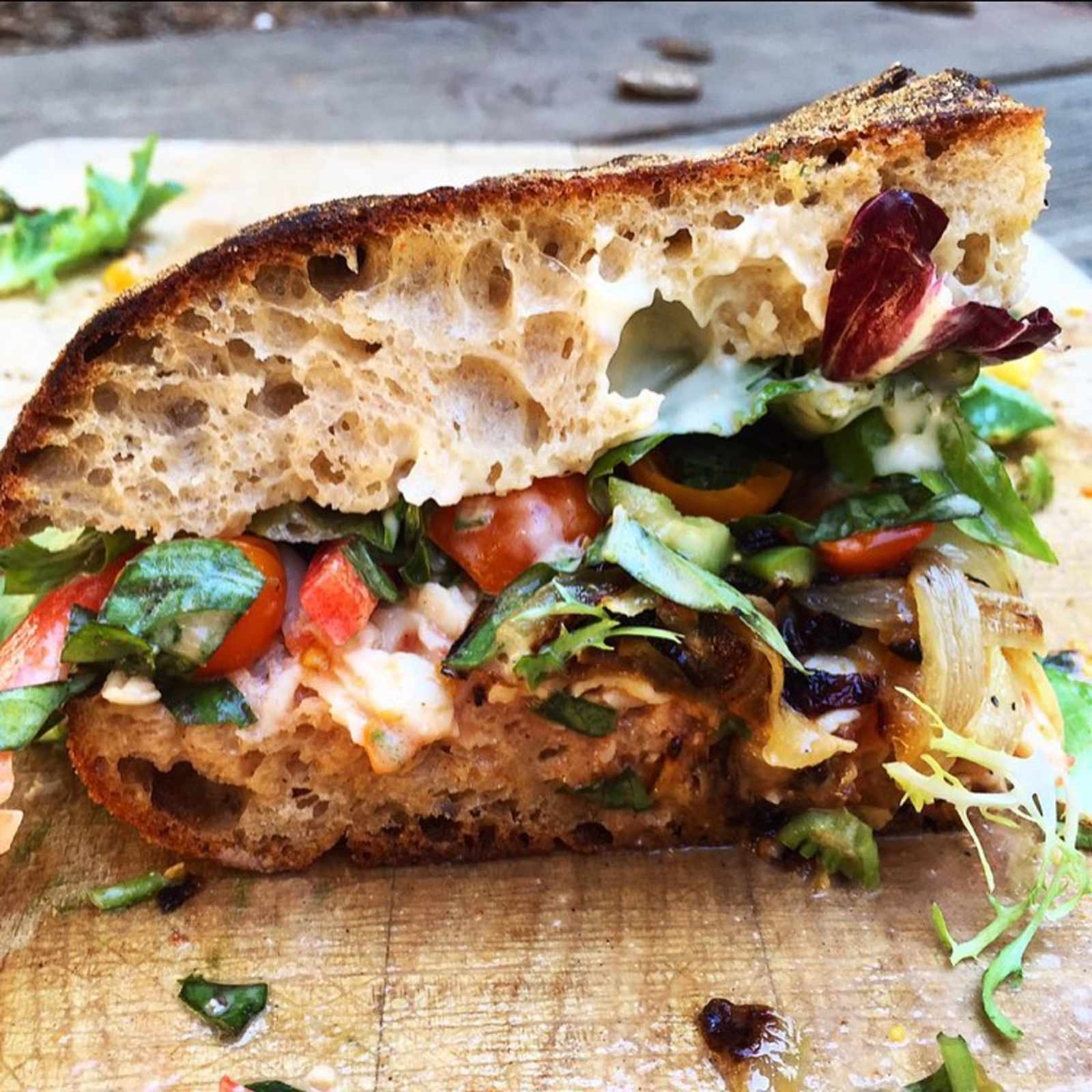 San Francisco’s famed purveyor of fancy toast, The Mill, is upping its $4-a-slice game. Earlier this week The Mill’s head baker, Josey Baker, announced that starting Thursday his crew will begin serving customers two pieces of toast, covered in toppings and pressed together to form what Baker describes as a “sandwich,” from the counter of the Divisadero Street coffee shop. And you better believe it’s going to be some artisanal shit.

We’ve been honing our sandwich game for months, and we think we’re ready to let ‘er rip… so starting this Thursday we’re gonna do just that… JBB sandos every Thur-Sun, 11am til they’re gone, $10 apiece. this week you can expect roast cauliflower + spring red onion, tokyo + scarlet turnips, baby kale, JBB special sauce, roast garlic aioli + provolone. next week you can expect something else rad. let us know what you think!!

Baker seems to be counting on the fact that customers will happily plunk down $10 for a sandwich — even if eight of those dollars are only covering the cost of bread.

And while readers are likely mumbling a collective “that fucking place” at this news, the announcement does present one particularly interesting opportunity. A little-known fact is that every Monday and Wednesday from 6pm to 9pm The Mill sells grilled cheese sandwiches, and during that time the coffee shop is magically transformed into the cleanest BYOB spot the Western Addition has probably ever seen. Hopefully, the bring-your-own-booze hours will expand along with the new $10 sandwich hours and we can all start getting lit in The Mill every Thursday through Sunday from 11am until whenever the food runs out.

After all, excessive amounts of cheap liquor has the power to make even $10 worth of dressed bread go down easy. 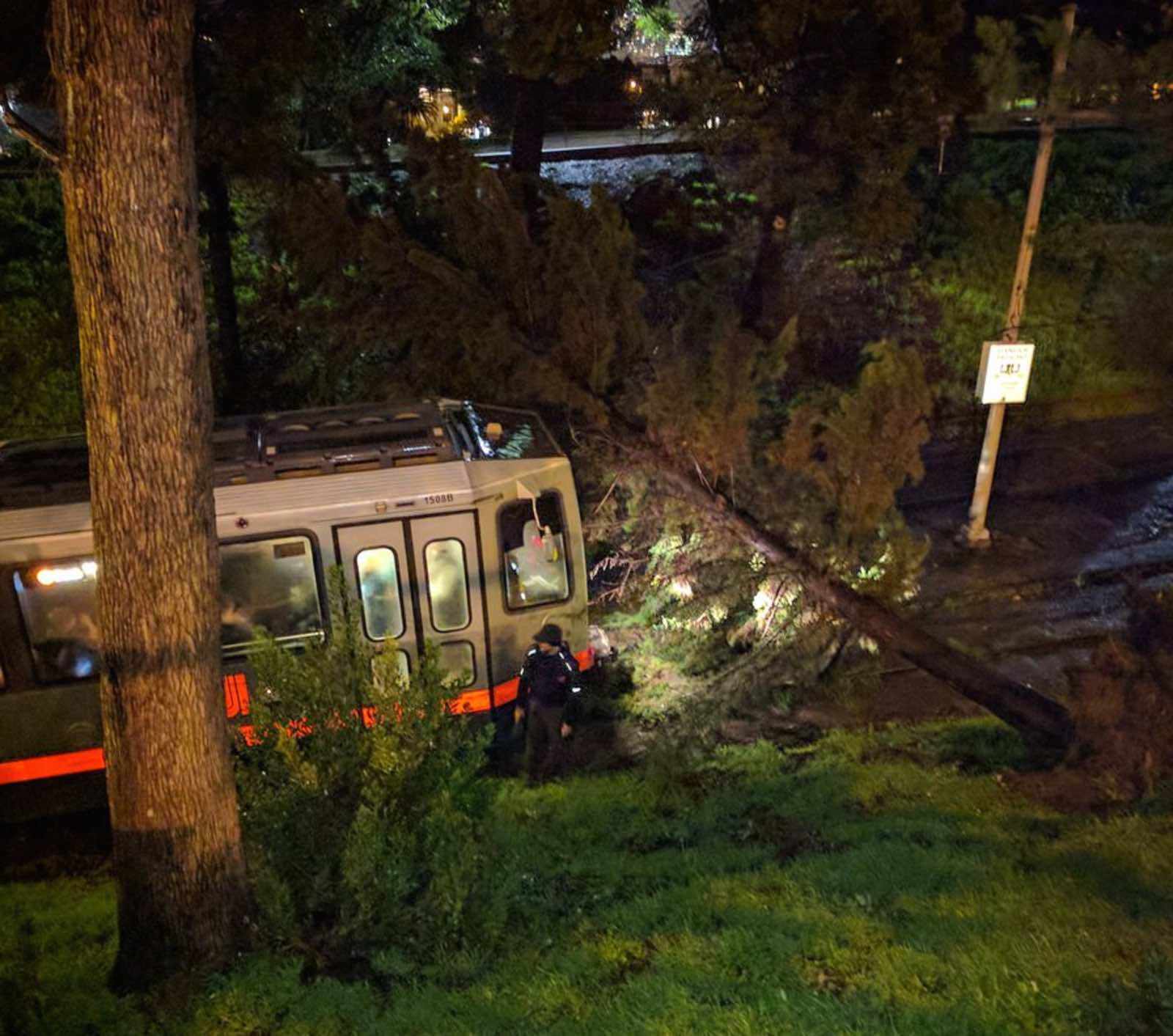 Last night’s storm did more than just jam up BART service. Indeed, it proved once and for all that Mother Nature is a true Mission dirtbag (god bless her). Intense winds knocked down a large tree on the western edge of Dolores Park — blocking the J-Church Line in the process.

Thankfully, the train operator was able to bring the vehicle to a stop before it collided with the felled tree. But still, we have to hand it to Nature for keeping things sketchy on the tracks even when the glass-breaking parkgoers are taking a rainy night off. 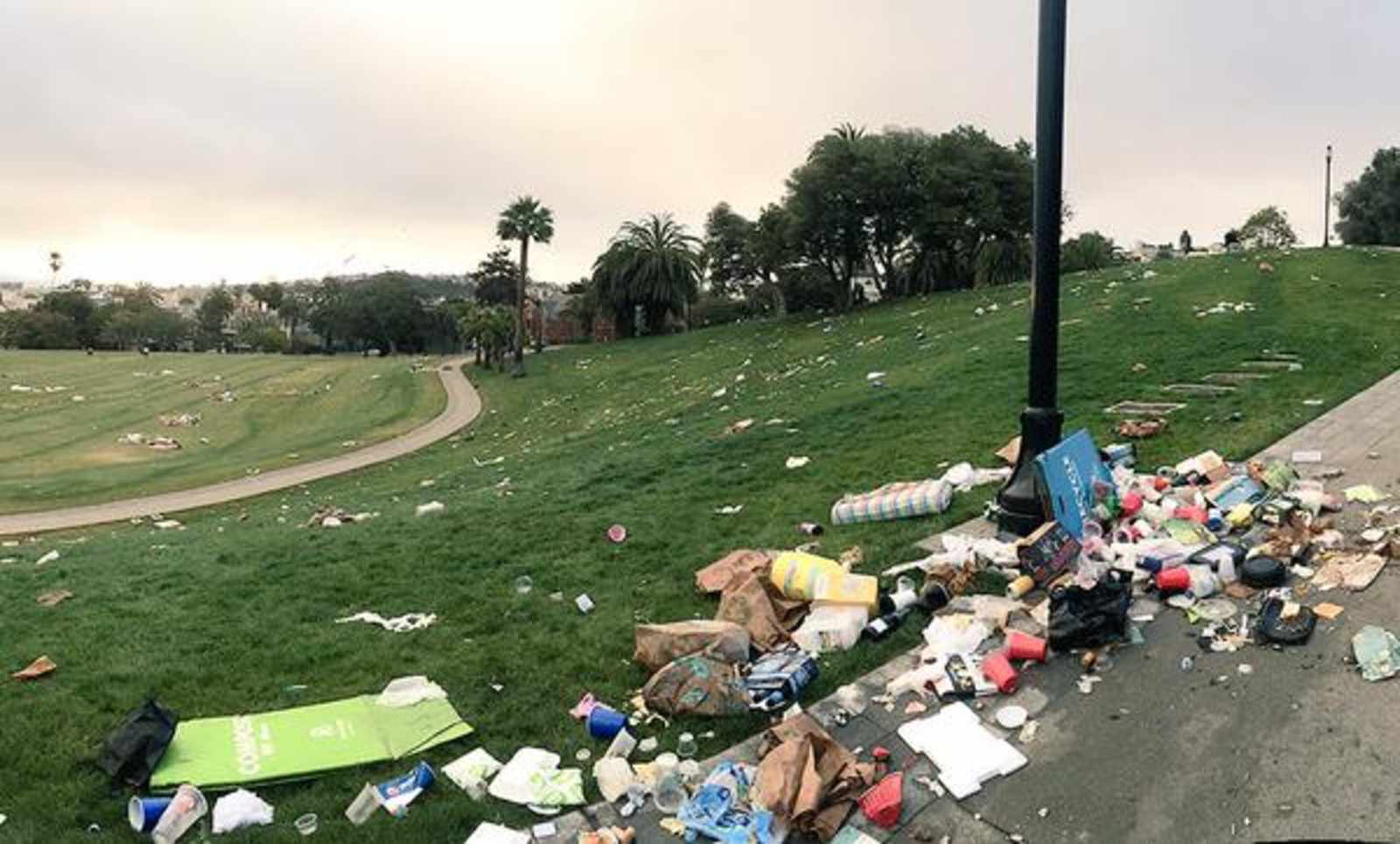 That’s right, your neighborhood naysayer is back on the beat — bringing you the kind of low-quality content you’ve so sorely missed. We’re talking hard-hitting reporting on startup founders, business closings, liquor-store cocktails, and the moment-by-moment movements of Dolores Park rangers. You know, the important stuff.

We’ll still cover all the same golden oldies you’re used to, as well as tackle the larger issues facing our great city. Because we live in San Francisco too, and you deserve better than Nextdoor.

Tips can be sent to holler@uptownalmanac.com. 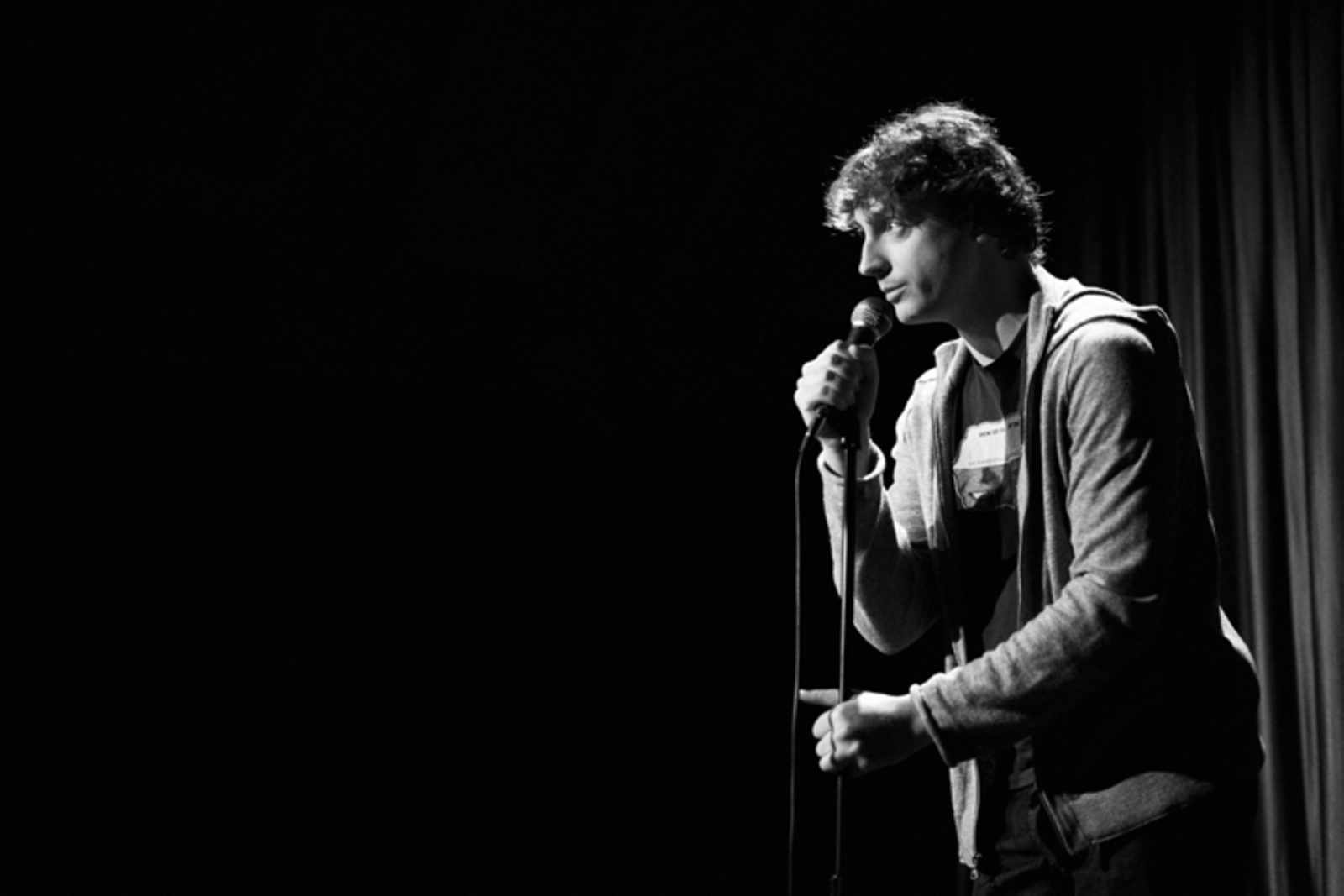 This week, go see comedy and music and/or literature mixed together.

On Thursday, Drennon Davis and DJ Real will be at the Elbo Room. They do a madcap music-comedy-sketch thing that I can’t describe but I love it. Here’s Drennon on Conan recently with Karen Kilgariff to give you a taste. Also go to the Elbo Room before it gets destroyed for more fancy condos.

This week is Litquake, San Francisco’s annual festival of words. Throughout Litquake and Saturday’s Litcrawl through the Mission will be an array of events that include comedians like Greg Proops, W. Kamau Bell, and me, among others.

You can hear these recommendations in my deep, sexy radio voice in the segment called FSFSF every Tuesday at 4:45pm on KALW 91.7FM public radio, during All Things Considered, or can subscribe to them on Soundcloud.

Nato Green is a comedian who also writes a column for the San Francisco Examiner, and performs on Saturdays at the Cynic Cave.

These parkgoers found a way to make the most of the seemingly never-ending construction project that is the Dolores Park renovation. 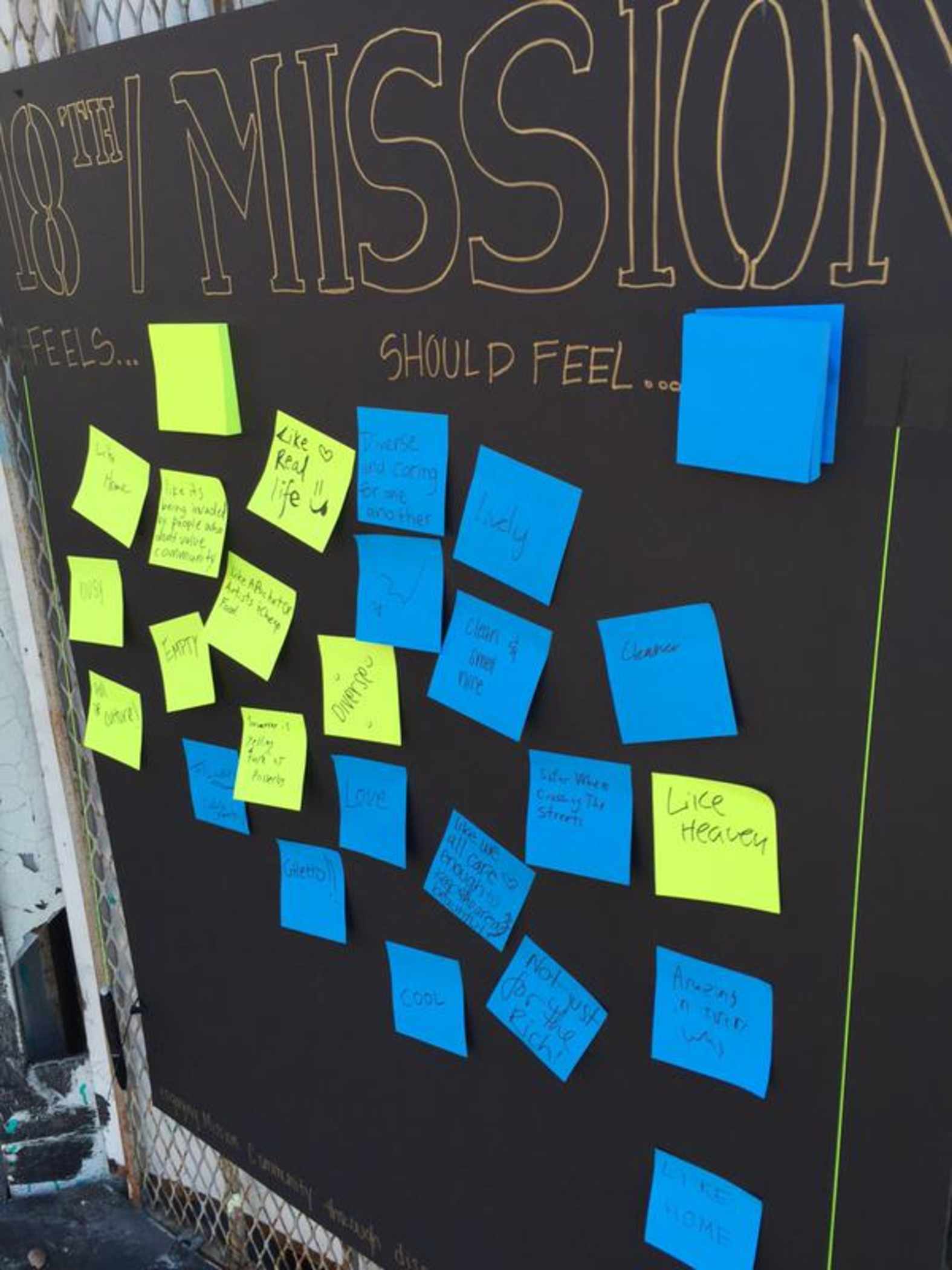 “Empty.” At least according to this sign, spotted by the wonderful Doctor Popular.