Skateboarder Goes Big on Two Cops, Gets Away With It 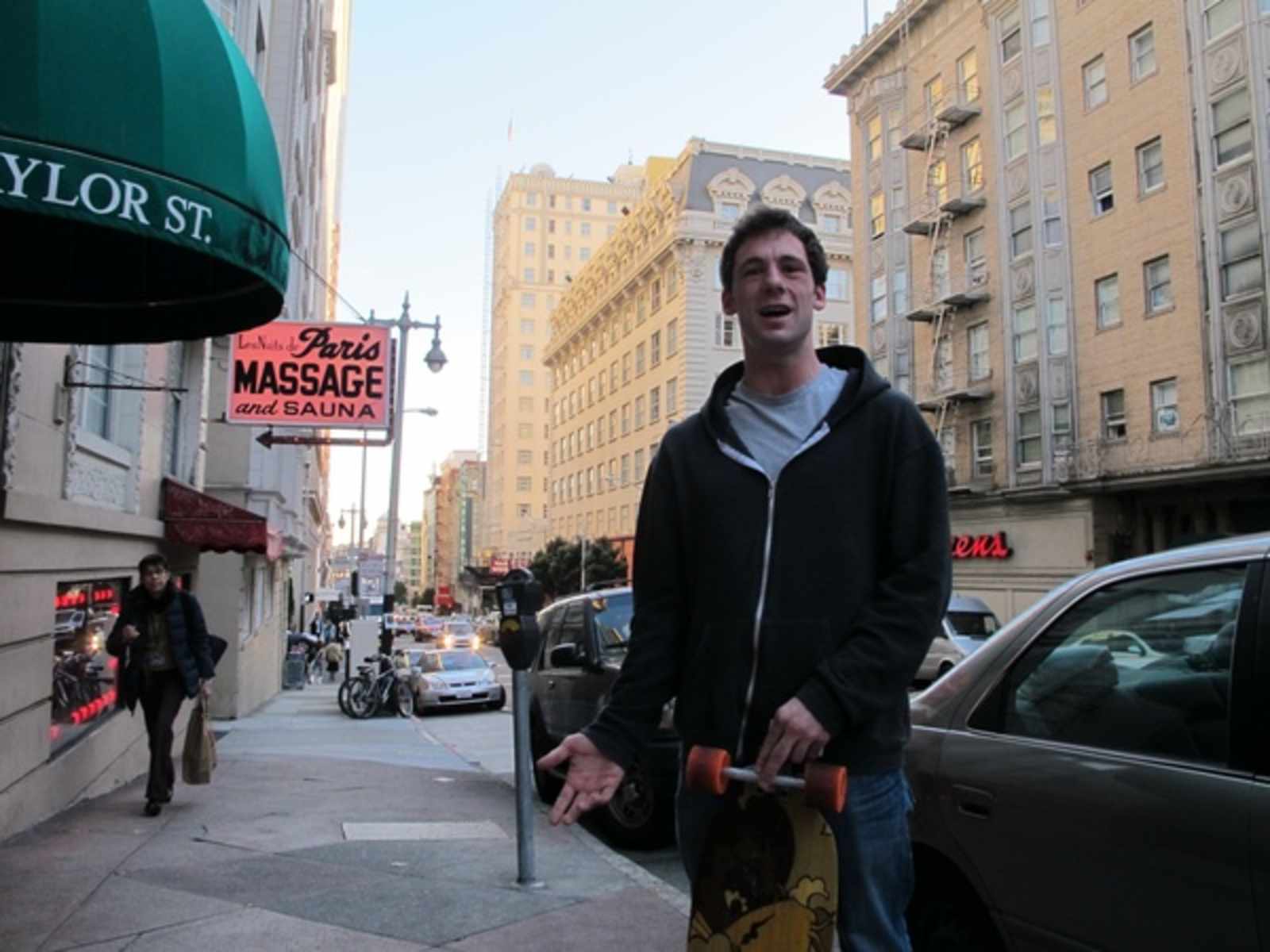 The Bay Citizen has the scoop on TL badass and skateboarder Matthew Hoyt, who punched two cops in the face and got a jury to acquit him:

Hoyt says he was riding his skateboard in a bicycle lane through the Tenderloin on his way to San Francisco Pride festivities in the Civic Center on June 26 when a motorist behind him began honking his horn.

Rude words and gestures were exchanged before the driver, who Hoyt says failed to identify himself as a police officer, swerved across lanes and used his car to box the skateboarder in between parked cars.

Assuming that the driver wanted to fight, Hoyt punched him through the open window, and then grabbed his board and scrambled over the car’s hood.

The passenger, also an off-duty officer, got out of the car and Hoyt punched him in the face too.

After flipping them off and punching them in the face, they identified themselves as cops, tackled him, and knee-dropped the back of his head.  Instead of getting tossed in jail for assaulting two off-duty officers, Hoyt is now pursuing a formal complaint against the officers for beating him up “a bit.”  Rad.

Hahahahaha! I can imagine a bloody-lipped flatfoot calling for an amber-lamps!

Didn’t punch hard enough. If you have to hit some one they had better be eating pavement afterwards.

cops are so worthless. all they’re good for is directing traffic and making cool siren noises to imitate when drunk.

Have you ever thought of the police officers that actually are in it for the rights reasons (and not some power hungry, got beat up in high school reasons)? Police are essential, or at least laws are. If we didn;t have laws, or police to police them, then you could get murdered without consequence. Your kids could be molested without an investigation or trial. DO you really want that?

I wish someone would take all anarchism lovers and make them live in anarchy for a year. See how that works out.

So basically your saying that if I were to spit in your face and knock you out cold then make my getaway. You’d tell your neighbors about it and they’d try and find me (i live out of town, and was tripping or something). I call BS. Neighbors don’t give a ****.

Or the whole, you know, stopping robberies and murderers and stuff.

see here mr cop? read these comments? why does the public not like you serving & protecting them?

Boy oh boy, isn’t it great to be white?

I’ll never forget that day at Columbine as shooters in the school wasted teachers and students as brave cops with loaded guns hid behind their police cars and waited for it to be over.
Same thing at VA. Tech. The cops entered the building only after the shooters had committed suicide. Yet, I’ve been stopped three times for seat belt violations and given tickets even though I was wearing a seat belt. Why? Easy money. Cops are good at taking easy money from hard working motorists, but just let someone pull a gun and watch them hide. Most police officers are pussies who were bullied in high-school and are trying to get even. Not a week goes by without news of some unarmed person of color who is shot multiple times by multiple cops who then are found innocent by a jury of their peers.
What’s wrong with this picture. Yeah cops!

has anyone ever heard of Oscar Grant? http://www.youtube.com/watch?v=IKy-WSZMklc&noredirect=1

Two cops cuffed him, and laid him face down in a BART tunnel. Then, because he was “struggling” (watch the videos and judge for yourself), one cop puts a knee in the back of his neck to restrain him. After he was restrained, another cop steps back from Grant, pulls his weapon (draws his weapon *AFTER* Grant was restrained), and shoots him in the back, killing him. Every time a bitch cop gets his ass handed to him by a citizen or, even better, a jury of his peers, anyone who has the vaguest idea of justice in their mind. Imagine a situation where you could restrain someone, lay them facedown in the street, then murder them with a gunshot wound to the back and you wouldn’t have to miss a Christmas. Well, the man who murdered Oscar Grant got two years, including time served. Estimates are that he will serve roughly 6 months. Considering that the mandatory minimum sentencing for pot can put people in prison for up to 55 years, 6 months for murdering an unarmed, restrained citizen doesn’t seem quite right. The fact is, the police can and will kill innocent civilians and get away with it. Officer Friendly is a myth, and the quote-unquote justice system in this country consists of a paramilitary force that has had its right to murder indiscriminately upheld on many occasions, and a prosecution/sentencing arm that refuses to prosecute these people lest they appear “soft on crime” and lose elections or appointments. Fuck every last one of these cowardly, murderous pussbags for daring to utter the word “justice” with respect to what they do. First in line to kill the unarmed, first back in the van when civilians need actual protection and service from real, dangerous criminals. And fuck every officer who has stood by while one of his fellows committed one of these heinous acts. If you gave a shit about justice, or even the rule of unjust laws as opposed to complete anarchy, you would arrest someone if you witnessed them committing a crime. Your inaction is further proof that the law considers itself above the law. You are just as guilty as the trigger man. You are part of the problem.

The epitome of living in a police state…shame on us for not overthrowing the givt
We did in the 1700’s - why not now?

While provoked and put in danger, he definitely over-reacted and assaulted the police. He shouldn’t get away with that, but neither should the cops get away with their behaviour.

You have to be kidding right. See it the way he did. Two guys roll up,off duty so no uniform and box him off the road. They then proceed to get out towards him while not id’ing themselves as police (Not that it would matter if they did he had committed no crime.) If this happened to you, would you just stand there and let two aggressive looking guys jump you. That is the very definition of self defence.

You make me sick, kid. Anarchists are the kind of folks that strip a Walmart clean of products just as soon as the protections that keep you from overspending on your SNAP card are taken down. Anarchists are the children that databomb legitimate government sites just to disrupt them and to stick a finger in their eyes. Anarchists accomplish nothing, invent nothing, provide nothing, share nothing, care about nothing, and are worth exactly that: NOTHING. Don’t think that your faux altruism that you type in here will last once you see your neighbors burning houses and raping your neighbors.

Anarchy is a nice thought until you conjure up your most hated person, and imagine what you’d do to him if the law wasn’t there to stop you. Then simply reverse the roles, and imagine that YOU’RE the hated person. Guess how your life is going to turn out? That’s right.

So don’t go off pretending you’re some ultra-hip anarchist at heart. If anarchy as you describe were to ACTUALLY occur, you would fall into one of two categories: either the cowering, terrified child that curls into a little ball and cries until the madness ends (or until one of the causes of madness ends YOU), or you’d become a horrifically evil mudering and raping thief that runs wild for a while until one of the other horrific people you associate turns on you and kills you for the LULZ.

Idiots. God bless the police for keeping idiots like you and your idiot ideas in your head and not on MY streets.