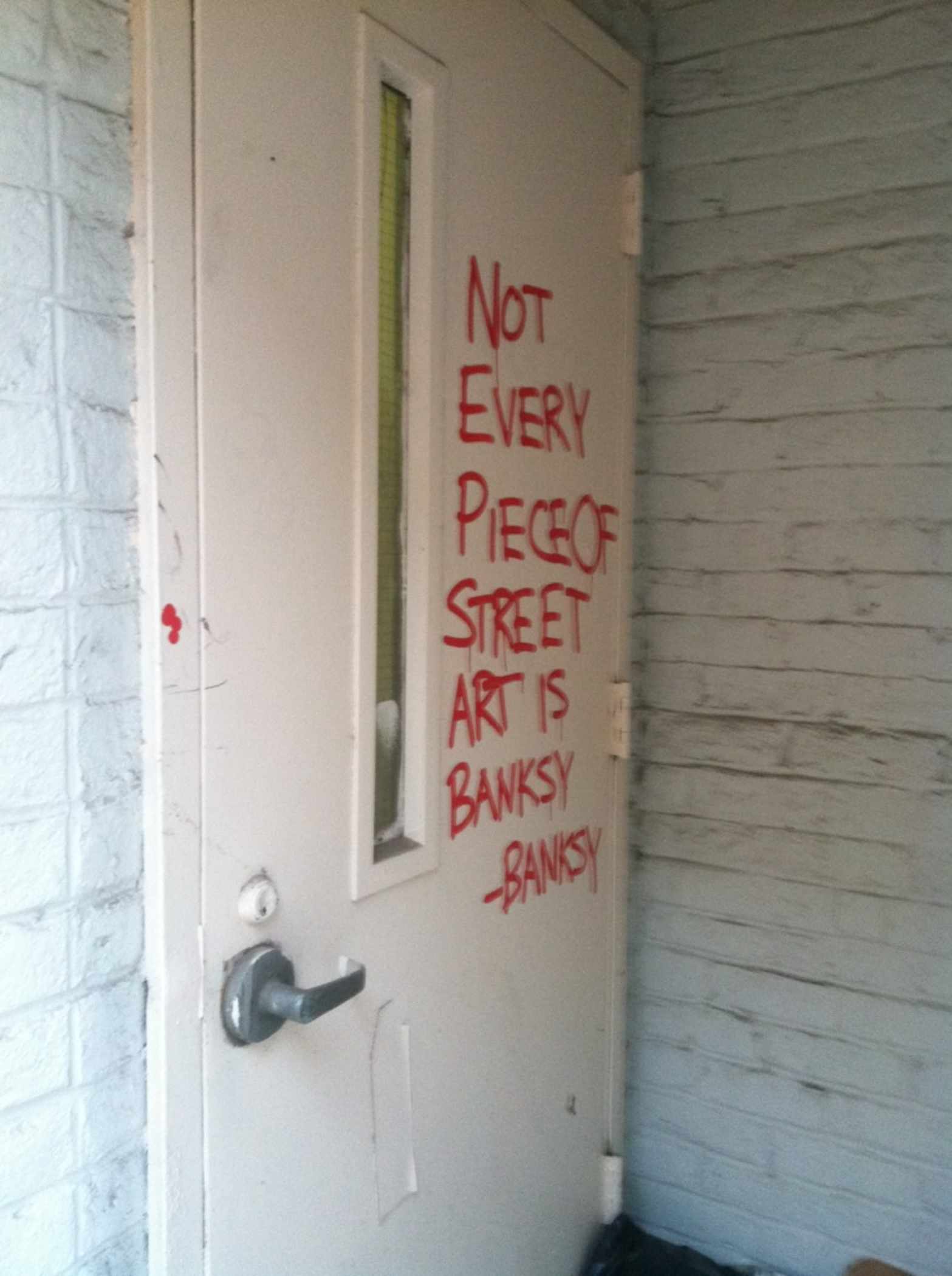 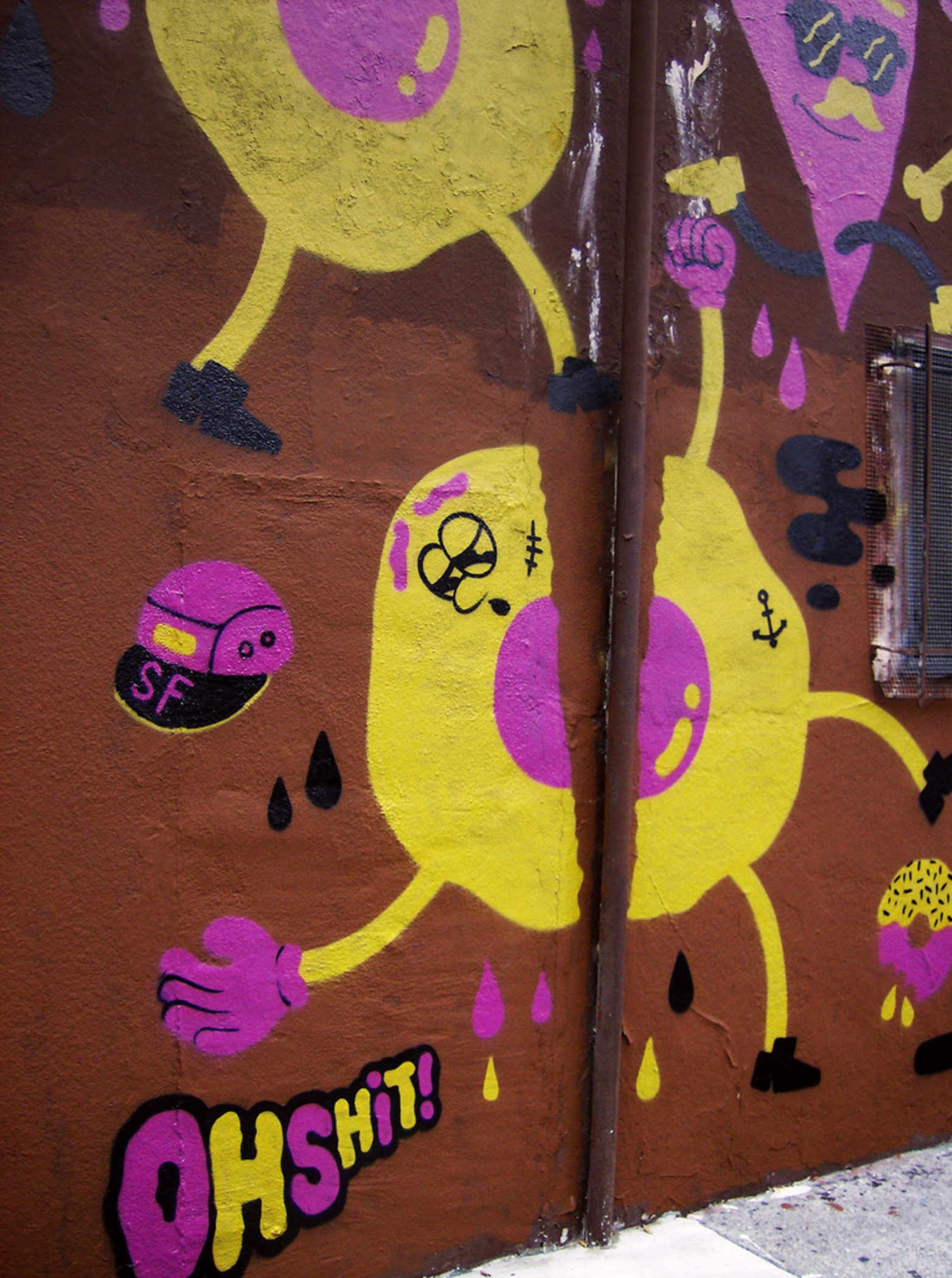 What's up at The Sycamore? The much-tagged-over Banksy is no more, but the awful brown color remains, with the queasy addition of loads of yellow and violet. Baskin-Robbins, eat your heart out!

Judgment aside, the mural appears to be dedicated to fried eggs having fun. 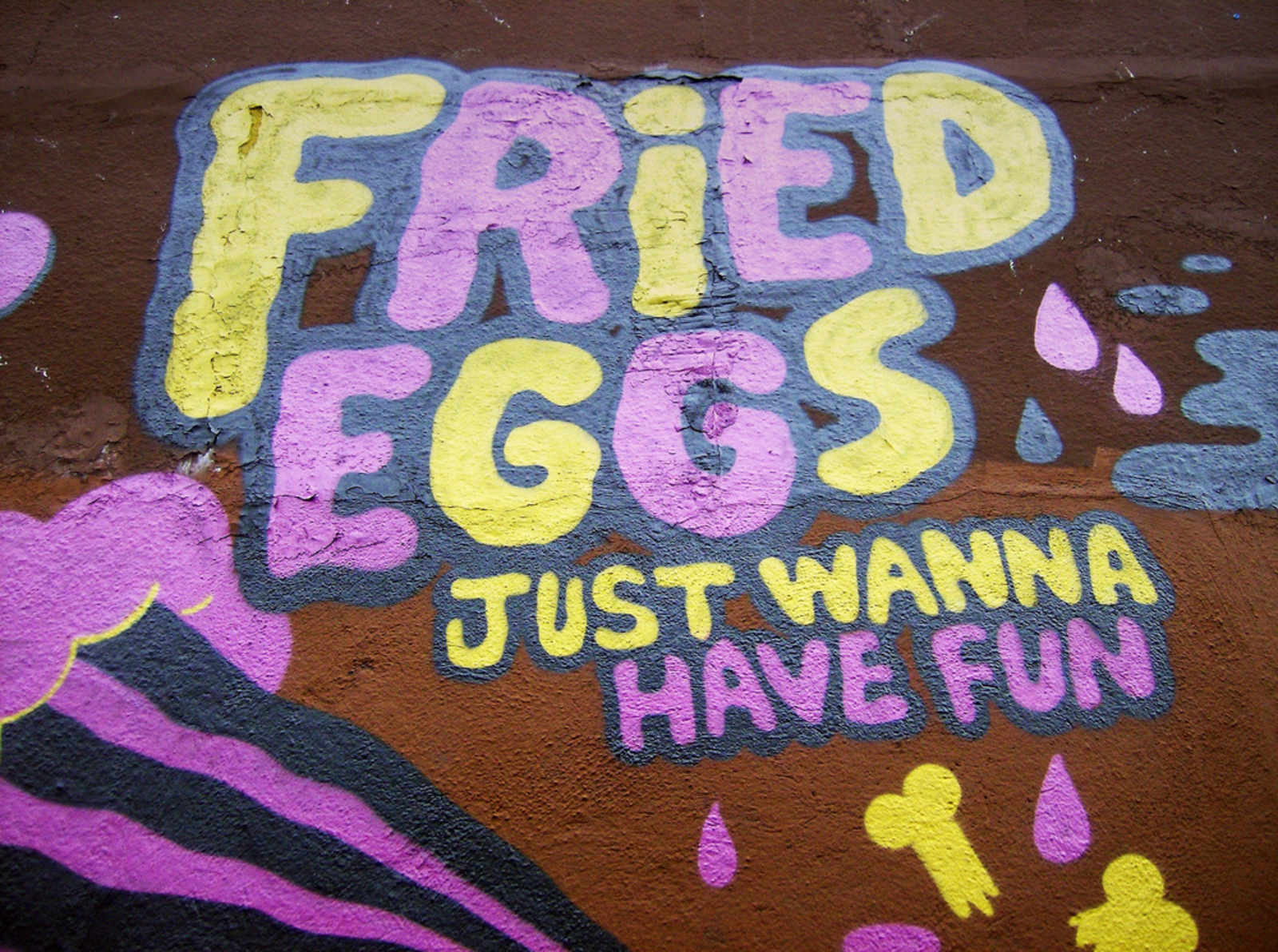 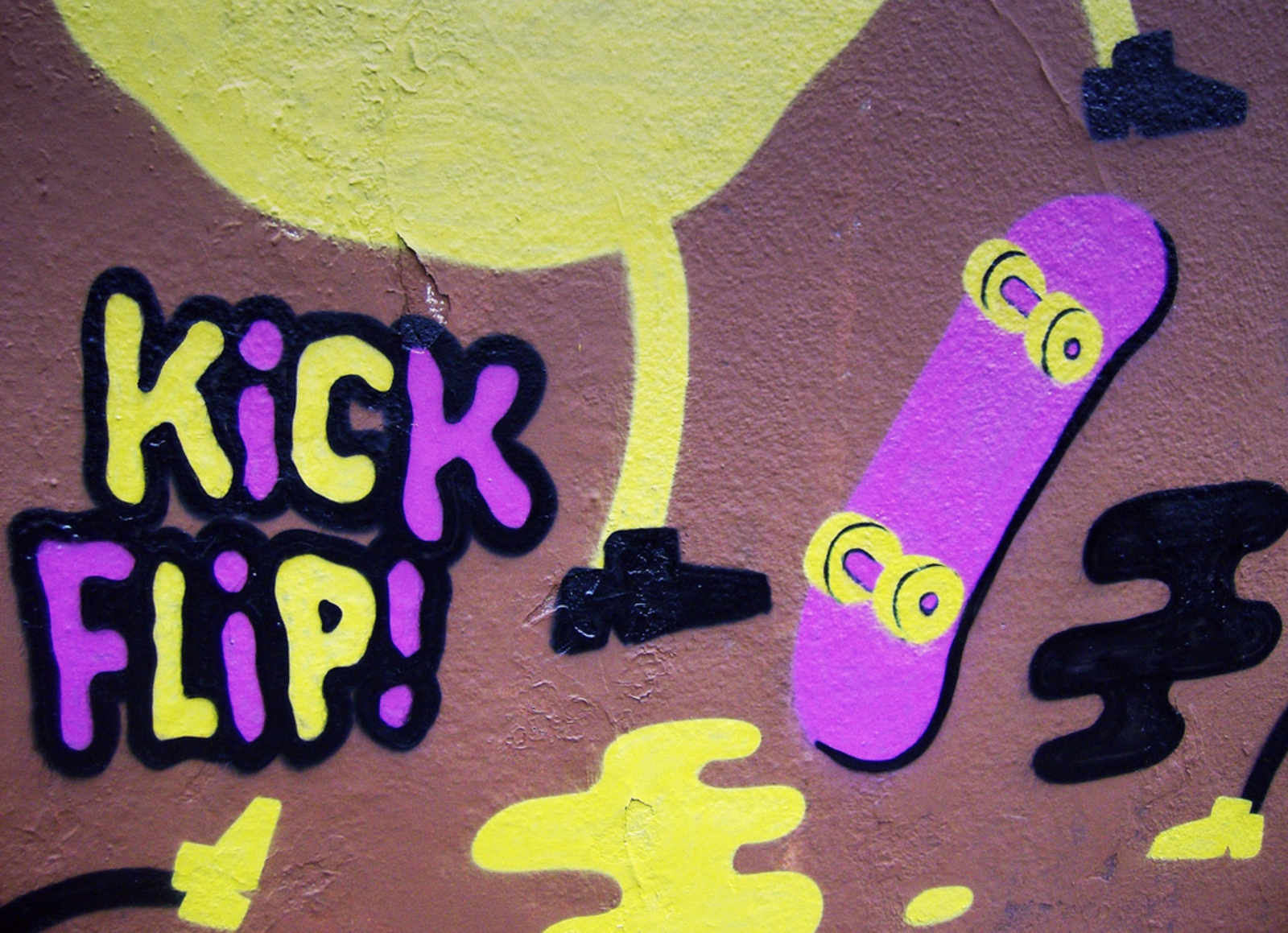 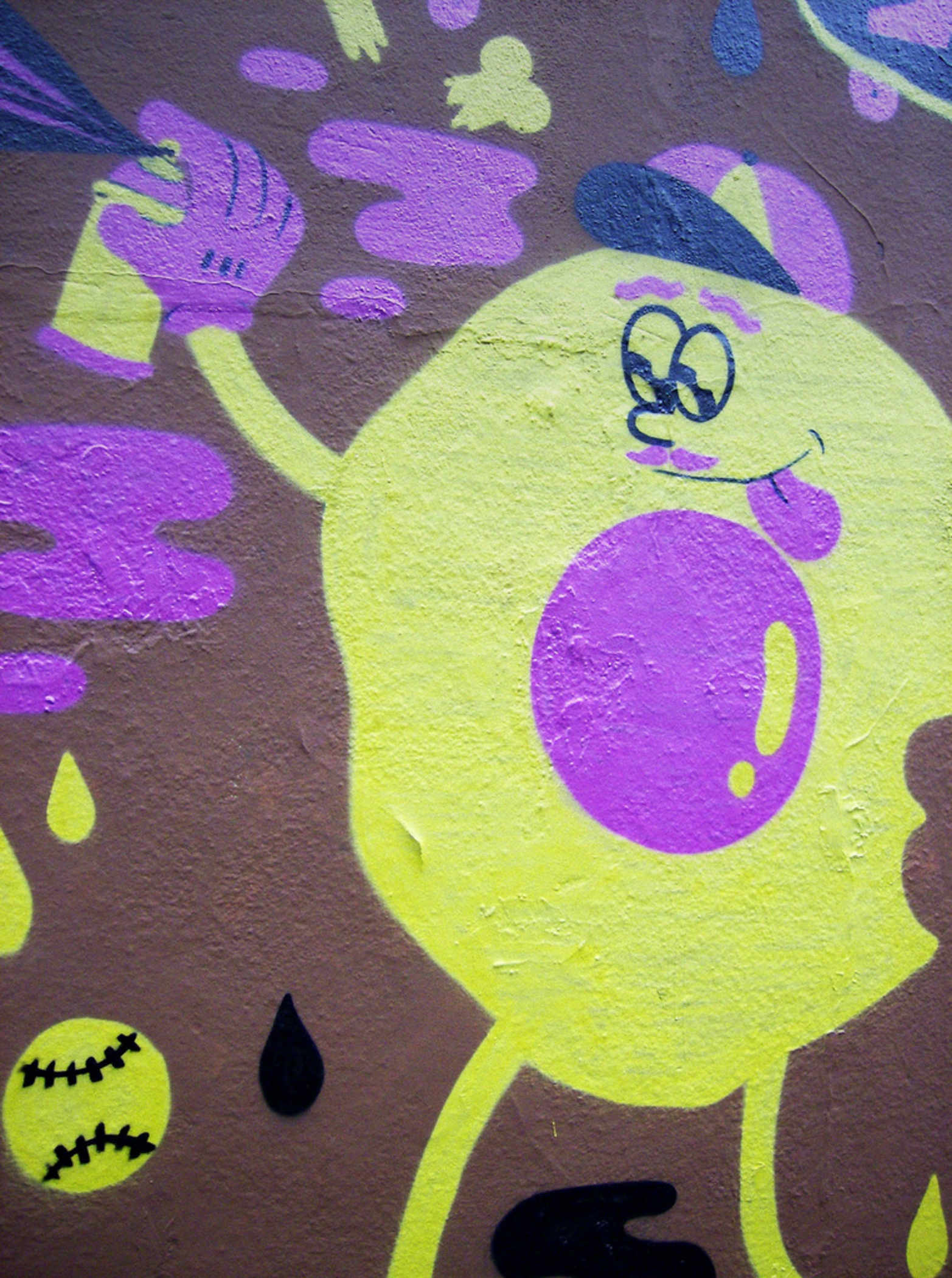 and apparently getting impaled by street signs (see above).

And in case you're not down with the shell spawn of barnyard fowl, the new mural includes fleeing root vegetables. 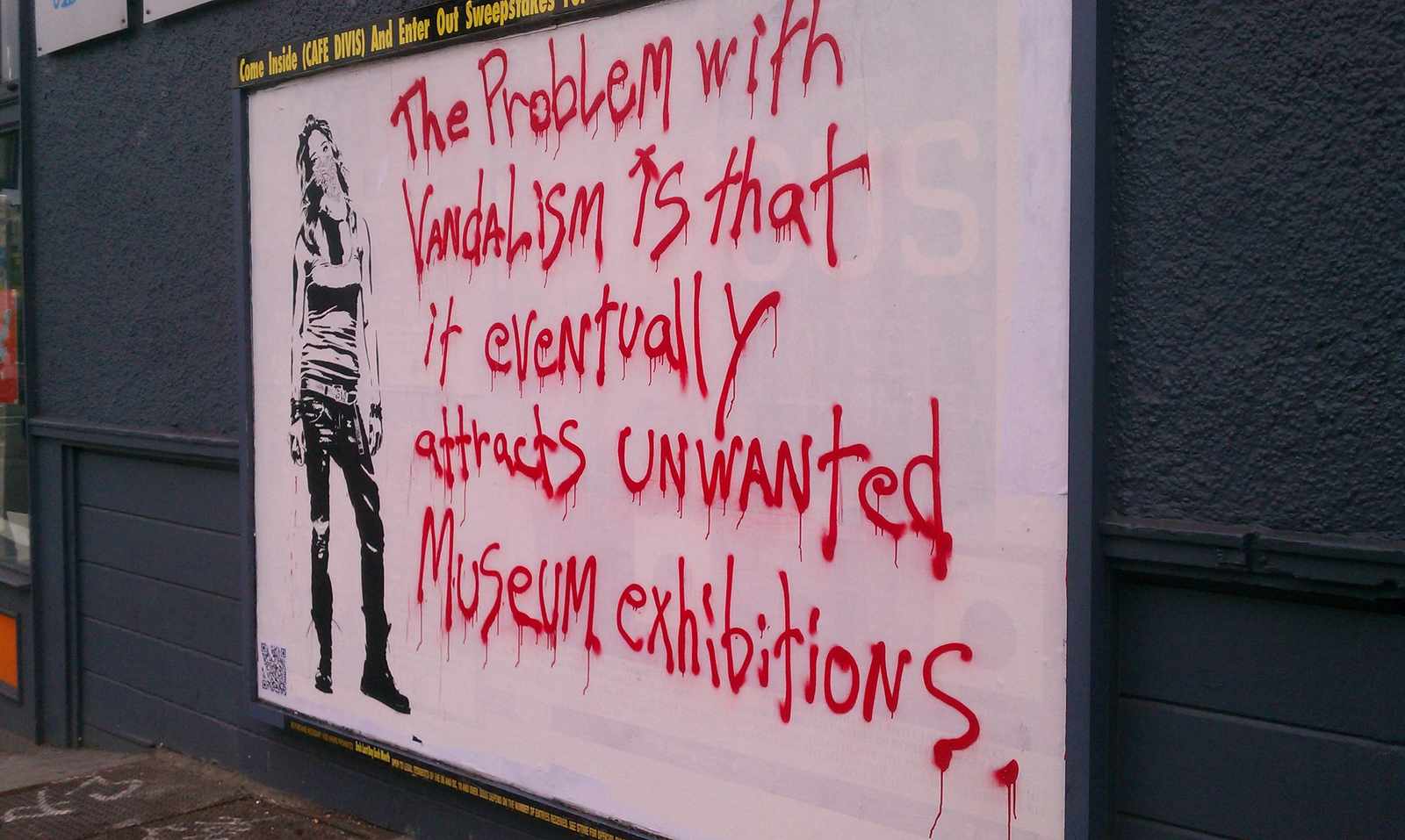 An anonymous reader sent us this snap of the Banksy-parodying piece on Divis and Oak:

I was walking by yesterday and saw this stencil made by Eddie (streetartist? Im not from here so I dont really have my streetart culture up to date).. anyways, the bartender from the winebar this advertisement is attached to, Vinyl, on Divisadero St and Oak st told me it was in response to some street art exhibit at the MOCA.

I figured I'd pass along the news to you guys. I thought it was pretty cool. 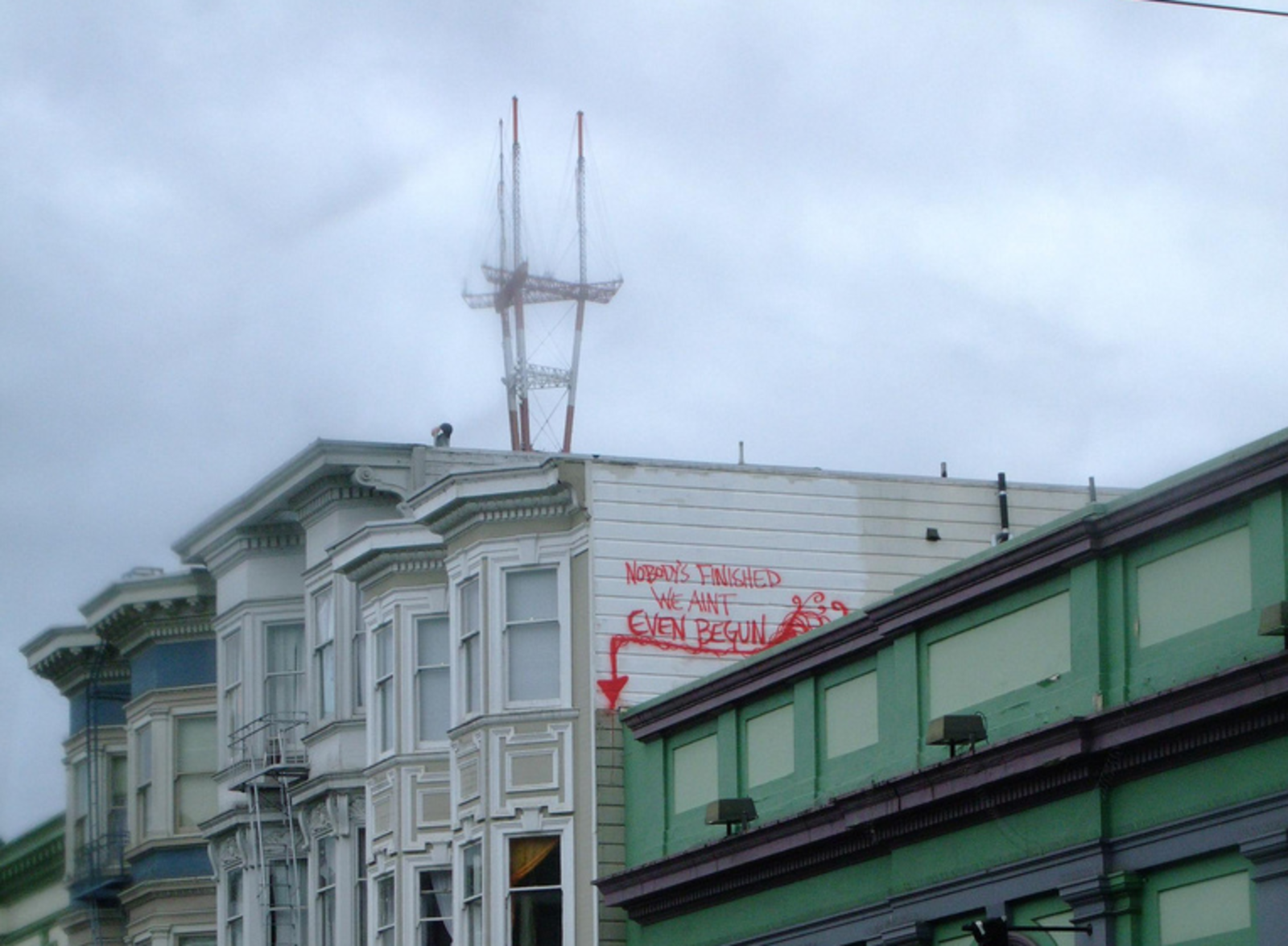 Banksy's “This is where I draw the line” on the side of the Red Vic got buffed a week or so ago after being up for nearly a year.  Now, I'd probably be more alarmed about this if I ever went up to the Upper Haight to admire street art.  Or if I ever went up to the Upper Haight for any reason at all.  But what amazes me about this particular instance of street art disappearing is that people have already begun 'defending' his work's memory—or at least going up against the property owner—as if it was some sort of human rights abuse to cover it up.  “Nobody's finished we aint even begun.”  Oh shittt, I can see the property owner pissing his pants all the way from the Mission. 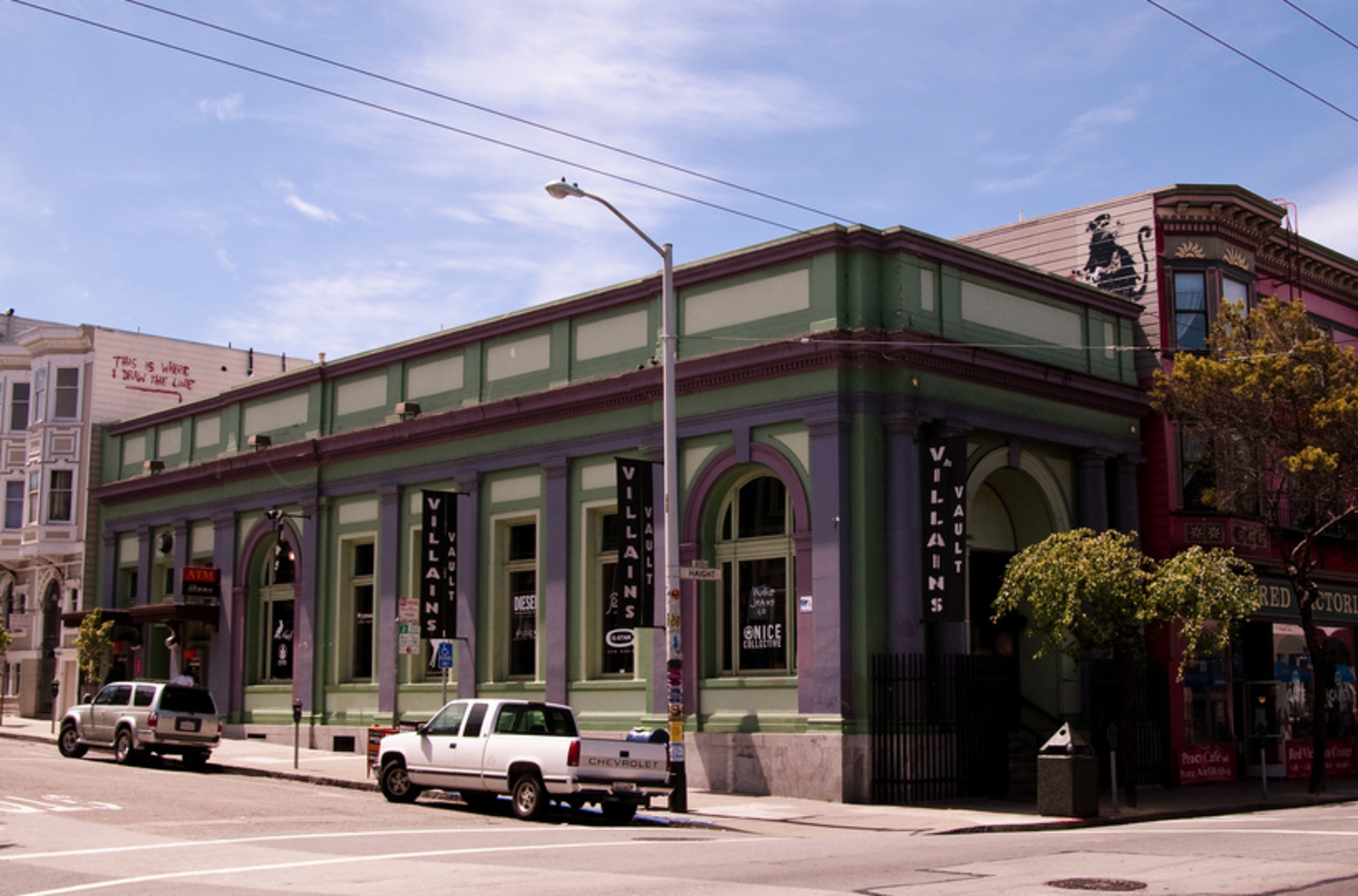 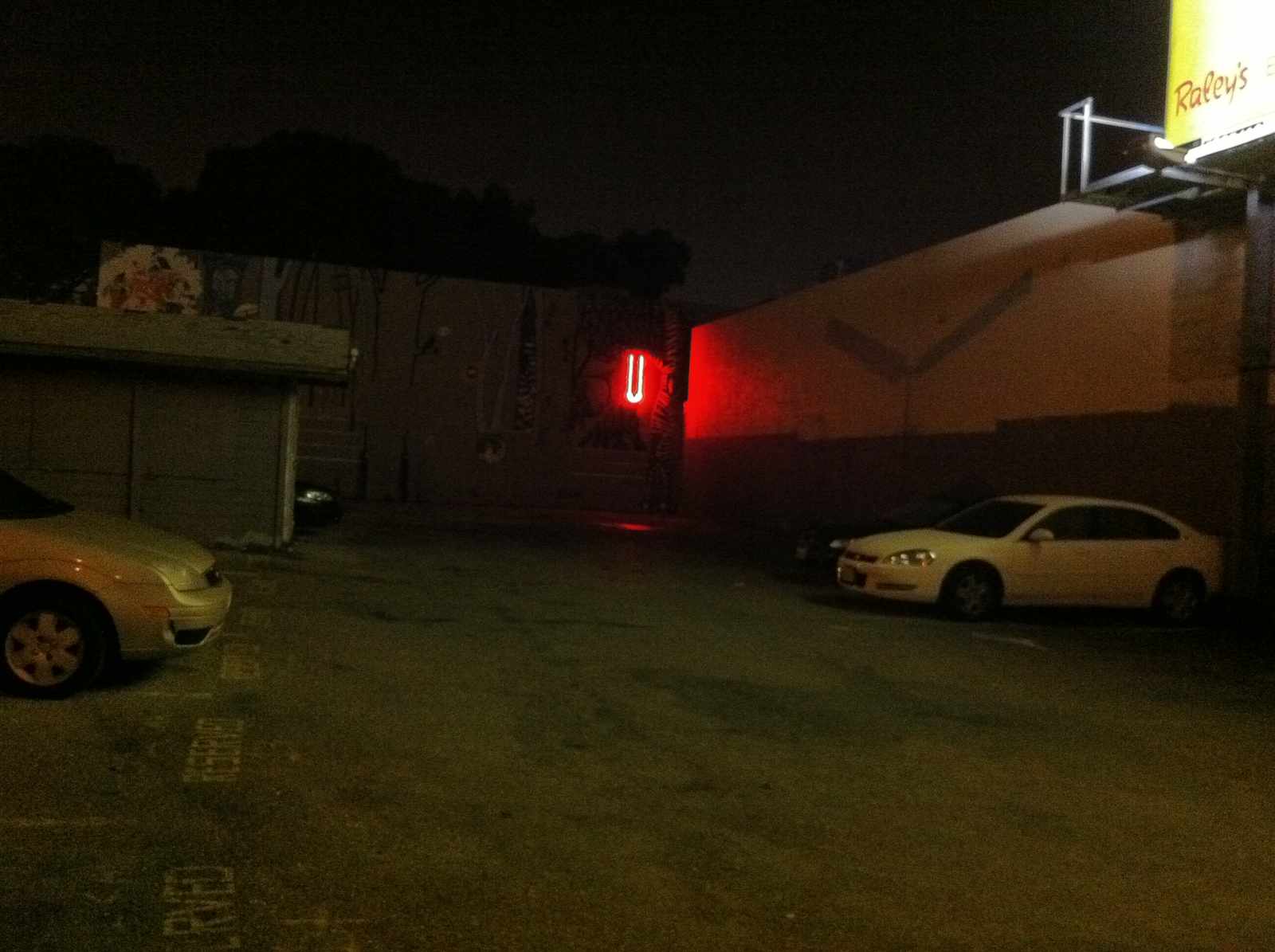 I'm not sure who thought this was a good idea, but someone hung up a flashing neon swing that is easily mistaken for a penis from one of the tree branches on the Banksy mural (below). 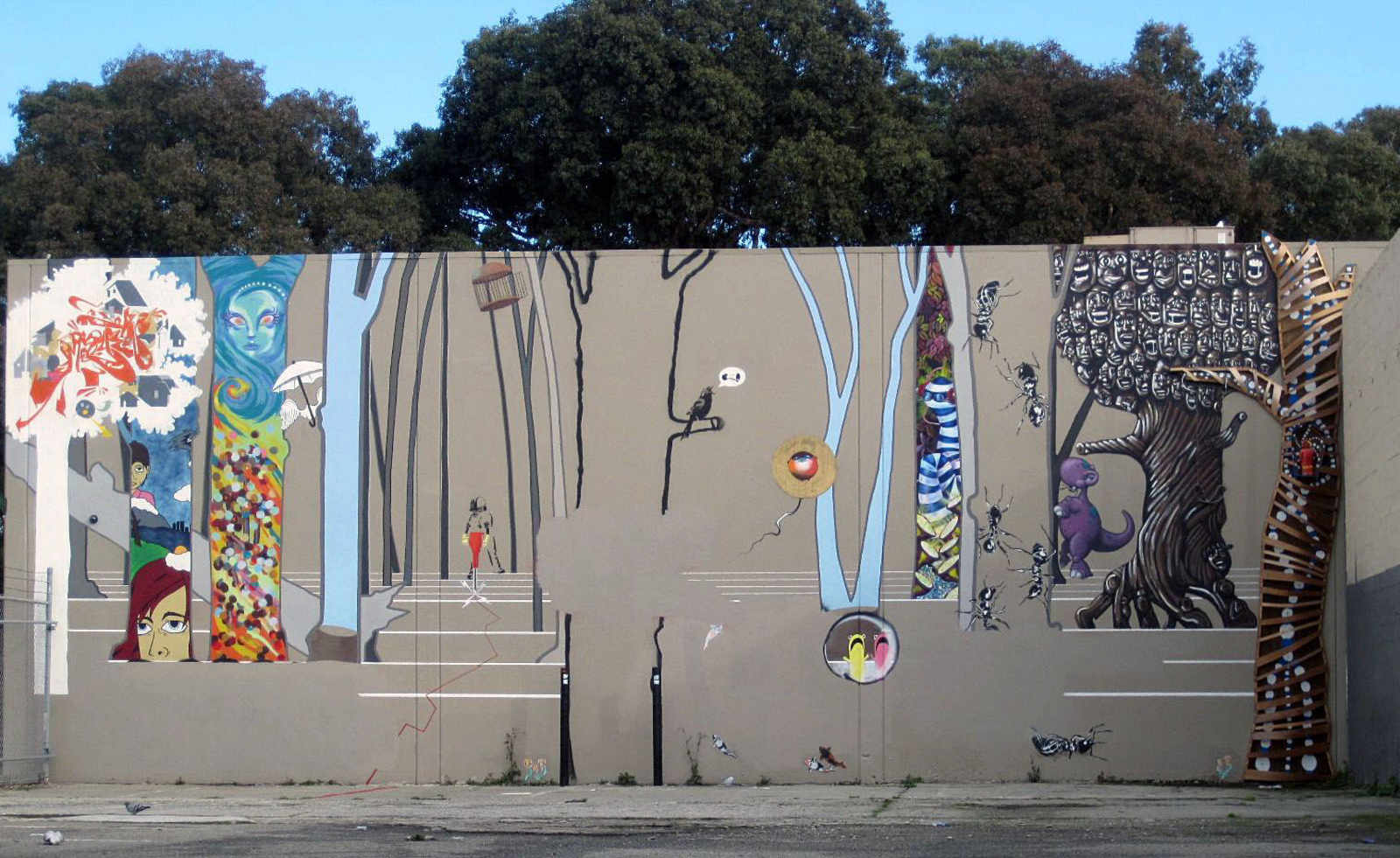 If all the sidebusting didn't already ruin Banksy's perfectly good street art, then this did. 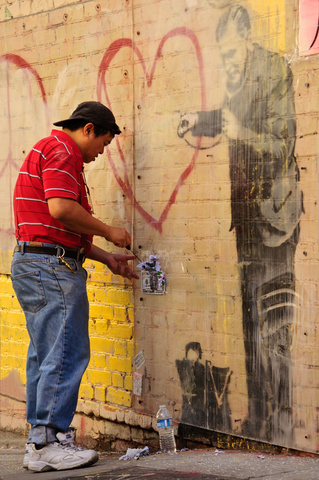 Over the past few months, I've seen dozens of photos of this shopkeeper maintaining the prized Banksy on the side of his establishment.  Scraping off stickers, washing off spraypaint, painting the wall around it; you'd almost think he created the art himself.

I'm sure Banksy can't help but laugh at this peculiar situation himself.  Had this piece been put up by anyone else, it'd be deemed vandalism and painted over immediately.  Instead, his artwork is cared for through paint bucket and tagging attacks, gratis. 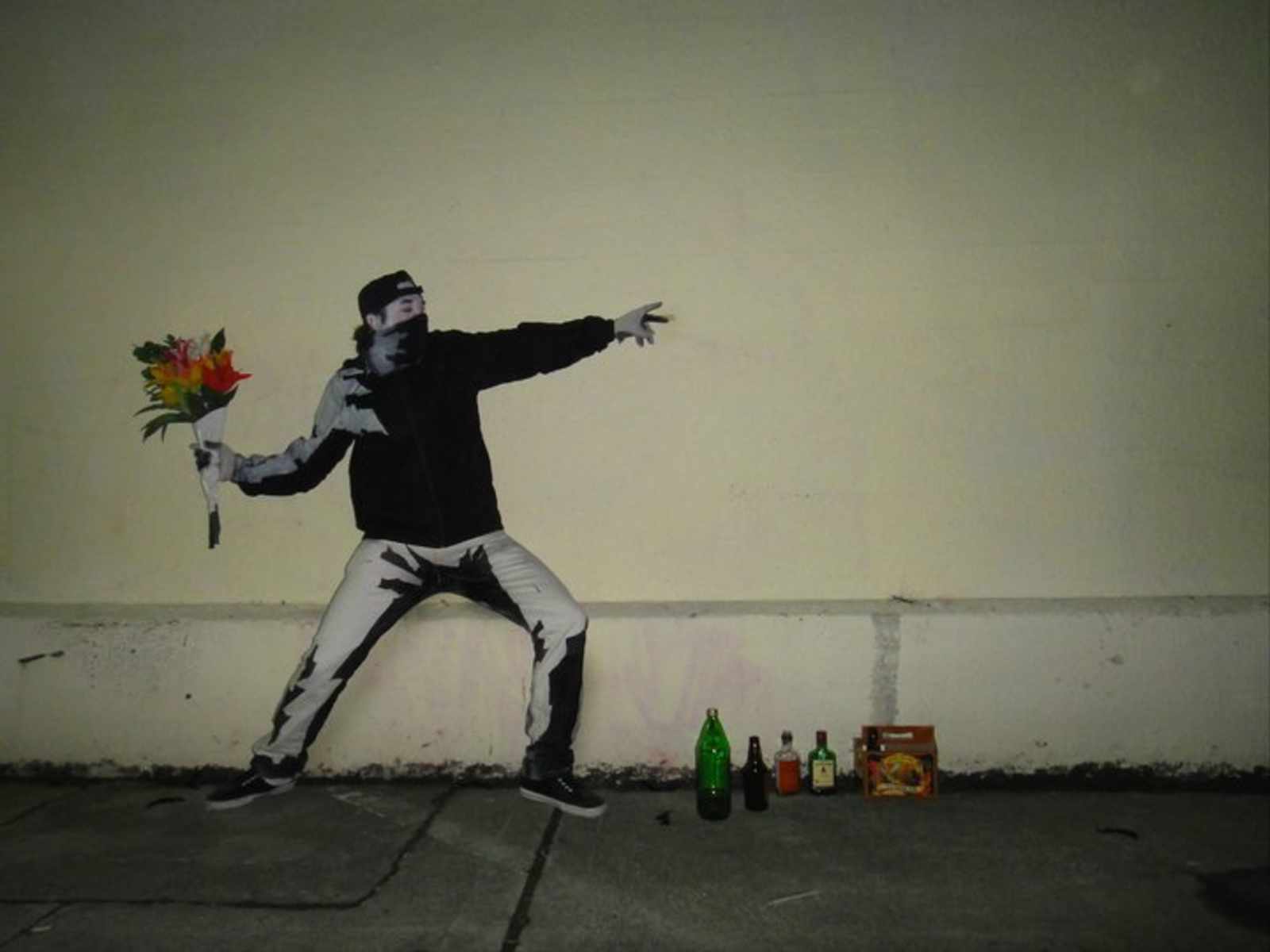 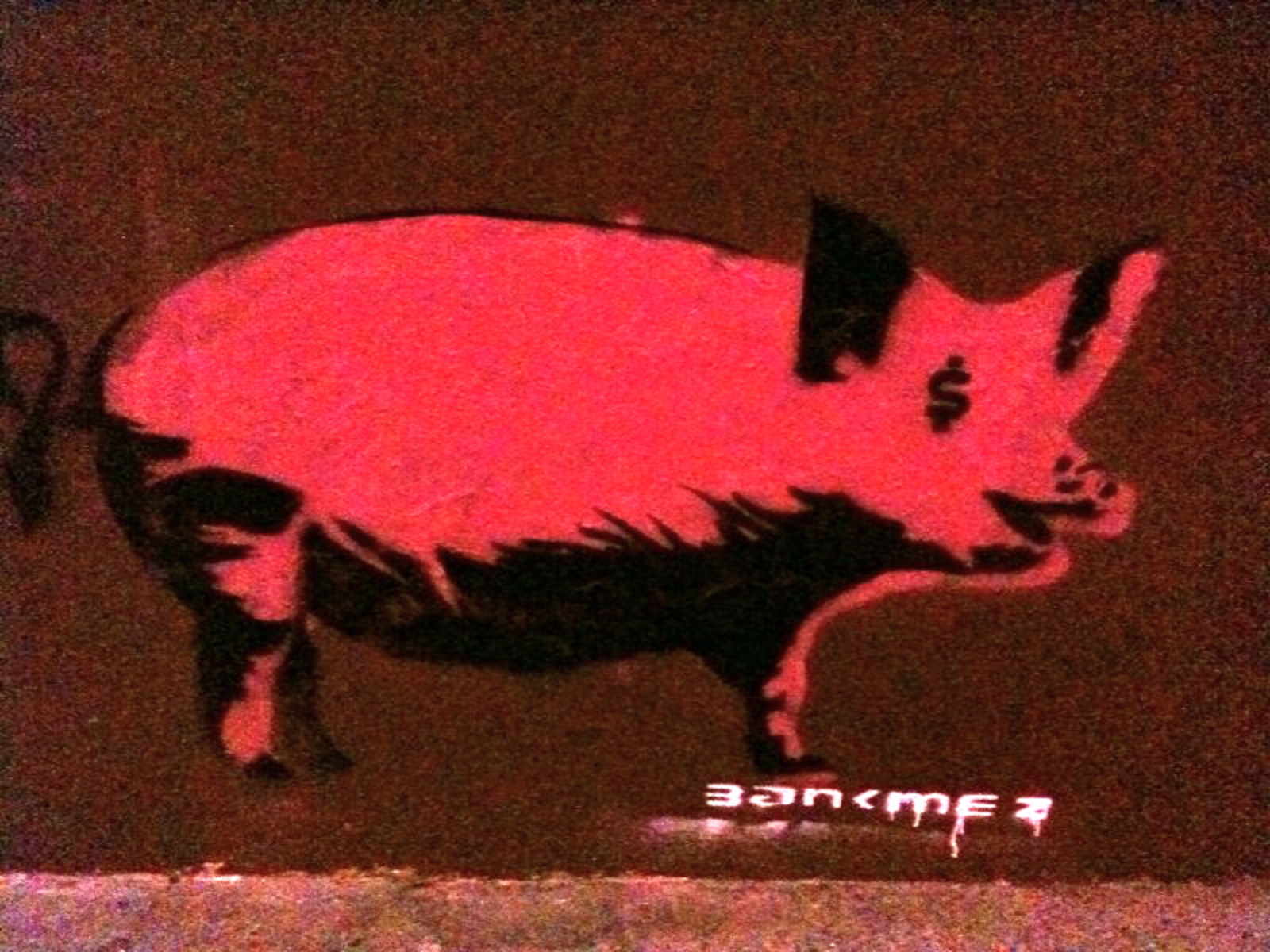 Reader Jessica B. snapped this the other night:

Sorry for the shitty cellphone-at-dusk pic. The pig's eye is a dollar sign. SNAP!

Next to the Indian on Sycamore at Mission.

This is the second hit we've seen this week, the first being a raccoon in Chinatown.  I guess we can start looking forward to more badass stencil art littering our walls for weeks to come? 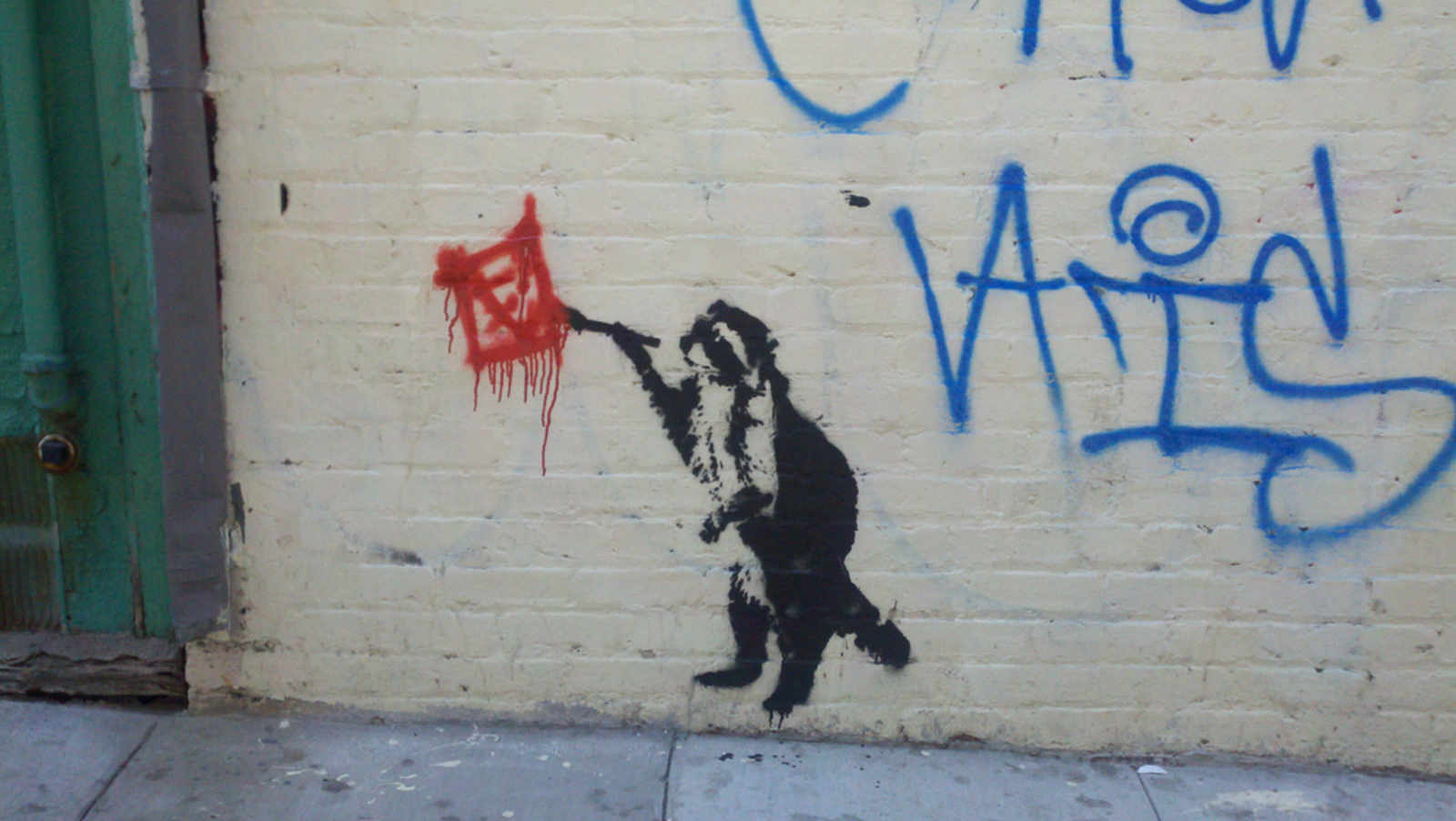 This is gold: Banksy's iconic rat standing on two legs and painting has just been parodied somewhere in San Francisco.  While I have no idea what the raccoon is painting (maybe that's the point?), I used to feed a neighborhood raccoon one summer when I was 11 or 12, so, clearly, I'm a fan of this piece. 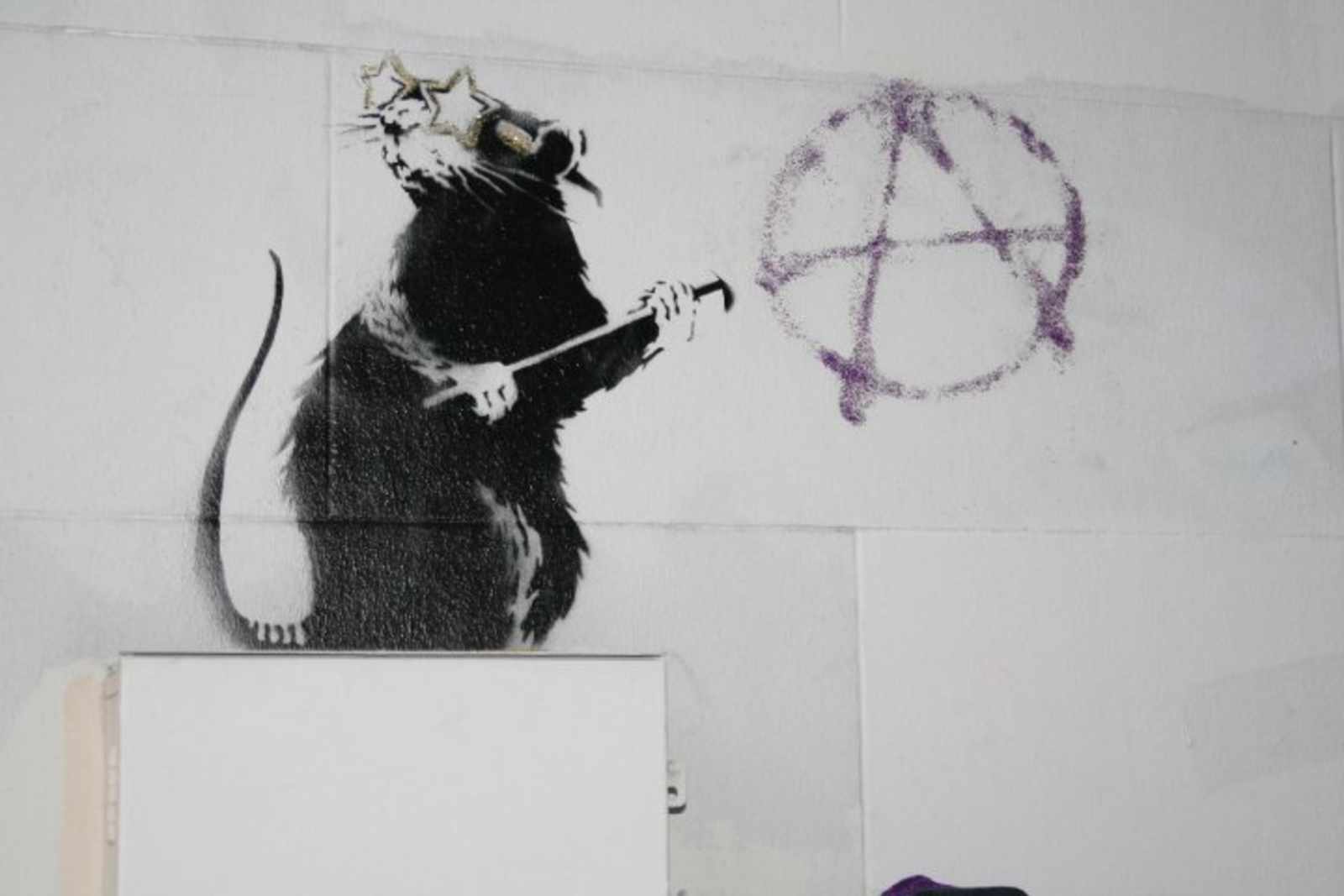 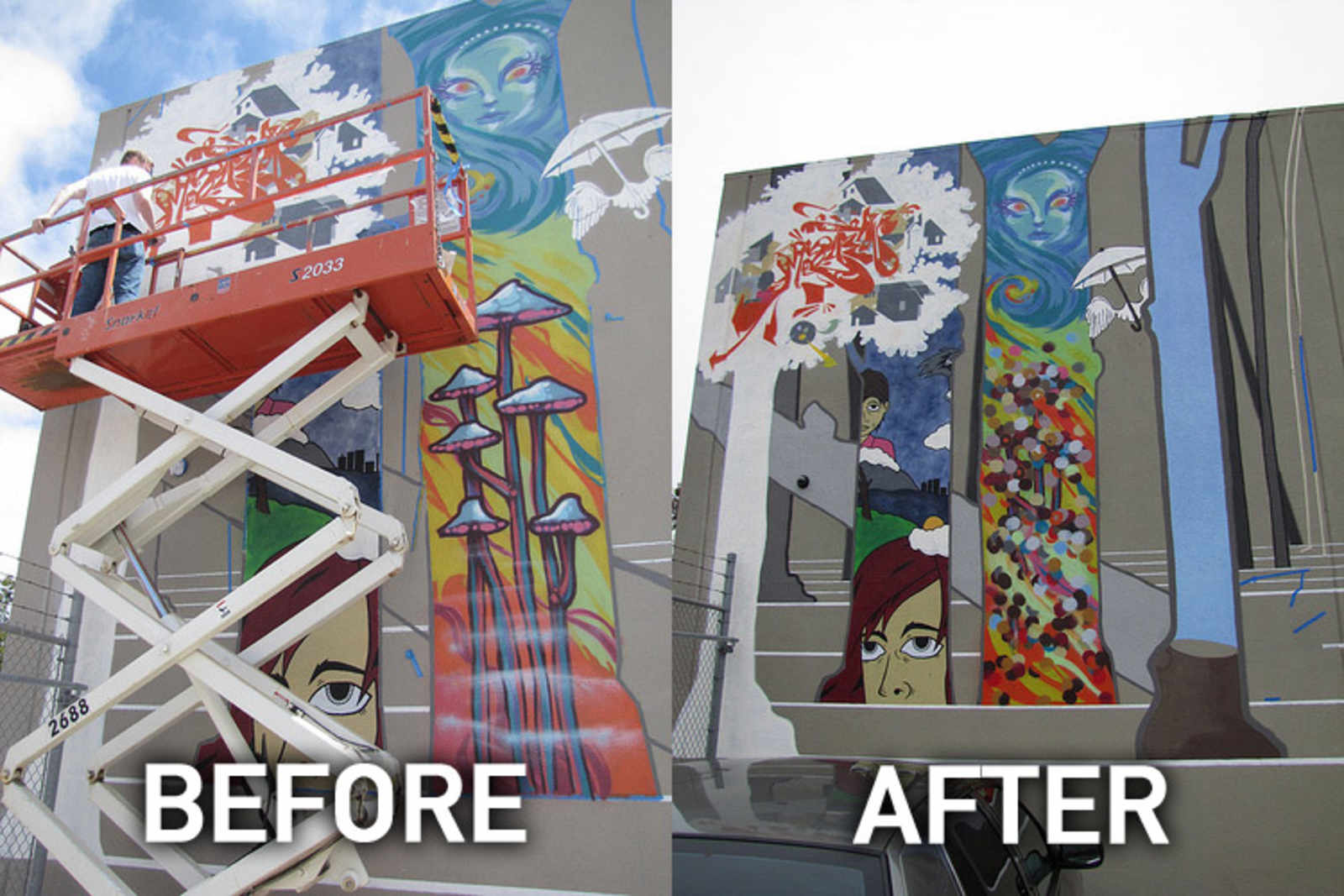 When a group of artists proposed to “finish” the mural Banksy “started,” many were quick to call bullshit.  I personally thought this was a classic case of capitalizing off other people's work but, hey, it was a better proposition than just painting over Banksy's “vandalism.”  Well, Blouz is reporting that the building owner, clearly a connoisseur of the arts, complained about the contents of the surrounding mural and ordered it to be covered up.  That's right boys and girls, mushrooms are too offensive for the mural designed to profit off of/protect Banksy's spraypaint for years to come.  Hats off to everyone on this one; the cacophony of dots really elevated the aesthetic quality of this wall.