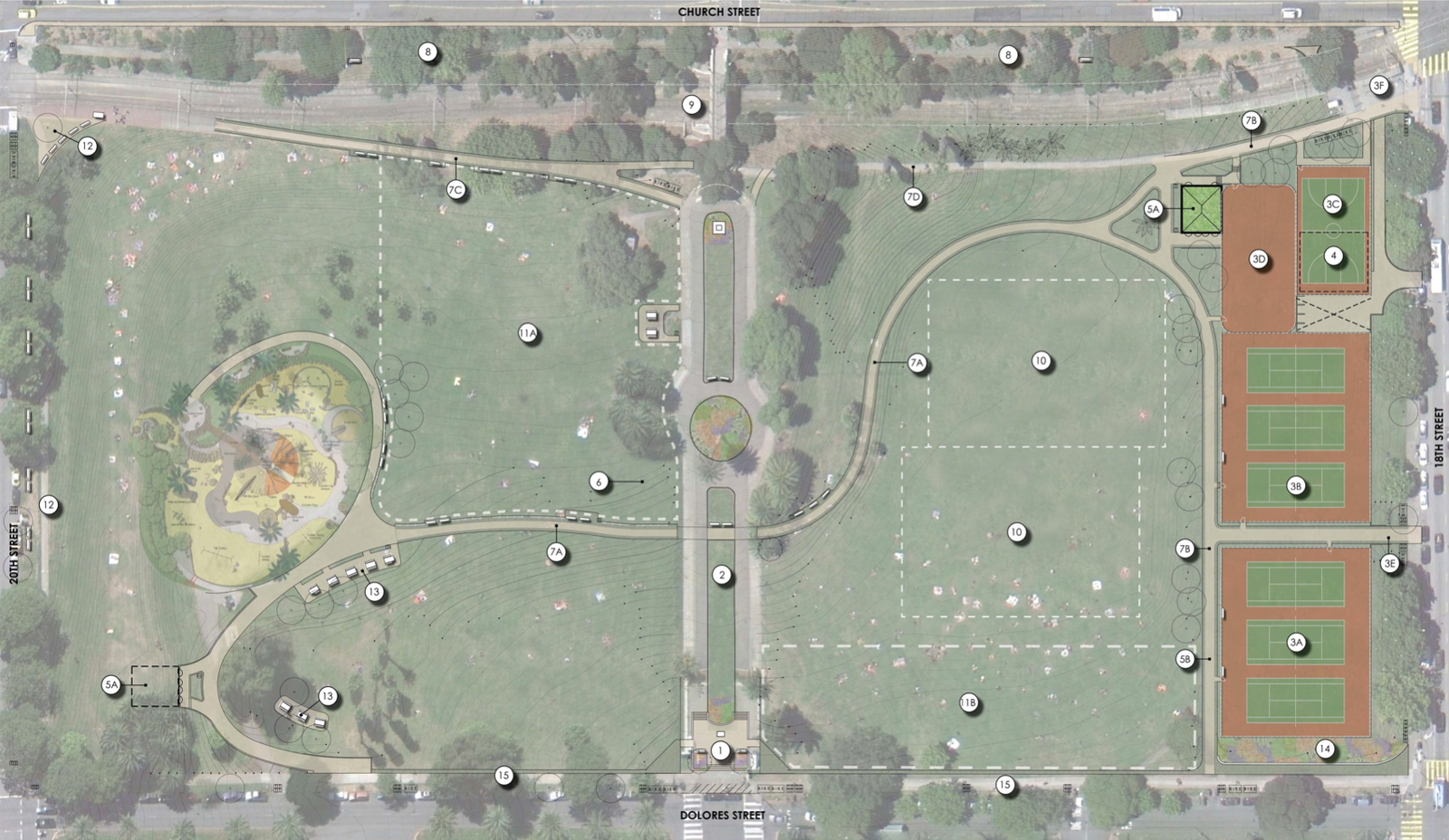 The five-month-long community planning and design phase of the Dolores Park Renovation project, which aimed to bring neighbors and actual park users together to produce a comprehensive, consensus renovation plan, recently wrapped up, producing the above plan for the park.  Dolores generally looks the same: the tennis courts will remain in the same location, the off-leash dog play areas will not be relocated or diminished in size, and almost all the trees and grass will still be there when the project is all said and done. However, there are some changes that will made when the 16-month renovation project kicks off next October:

From here, urban planners, city officials, and Rec. & Park staffers have three months to butcher the community plans, followed by the unveiling of the finalized “Rehabilitation Plan” in February.  Construction is still slated to begin in October 2012, which means we still have 11 months before the rest of San Francisco is forced to discover just how rad of a place Precita Park is.

In the meantime, here are the full-size community-driven designs:

my borderline ‘tarded friend annette has old lady knees. i wish they would put an escalator for her to get up that dang hill.

Gotta say, I really appreciate your consistent reporting on this. I’d have very little opportunity to stay up to date with it otherwise. And it seems like this design is a good compromise. Cheers, KevMo

Sounds good, though I’d like to see the Tai Chi plaza replaced with a stage for the Mime Troupe.

Of course, it will have a collapsible floor which leads to a pit filled with hungry lions so we can take care of the “Mime” Troupe once and for all.

I’m not the only one who loathes Mimes.

Would have liked to see both off leash dog areas fenced in. Few dog owners are going to respect the rules anyway. A fence on the dog area near the tennis court would at least make it obvious that that’s where your dogs should be.

Disappointed that they didn’t budge on the width of the path as well.

Great changes though, will be a lovely park when its finished.

The hipsters’ll fuck it up regardless.

Kevin, you posted the WRONG plan. The plan above is almost a month old.
SF Rec and Park released a revised plan at 2:15 PM on Tuesday, November 15, 2011.
See: New Diagram Download Link

The revised plan includes some fairly major changes in path widths and usage designations.
The path that ‘snakes’ thru the North Field from 18th and Church to the Promonade close to Dolores St. was reduced in width to six feet and is primarily for pedestrians and ADA access (a turf cart could drive on it at 6:00 AM when there are no pedestrians). The path that goes from 18th and Church to 20th and Church on the west end of the park next to the Muni tracks will be widened to ten feet wide and will double as a maintenance vehicle access road.

yeah, you asshole, you’re trying to pull the wool over our eyes. what is your agenda, kevmo? why do you refuse to show us the truth??????? i thought the uptown almanac was all about the public process… disgusting.

Can someone point out where the Man Shelf is on this map? Just curious.