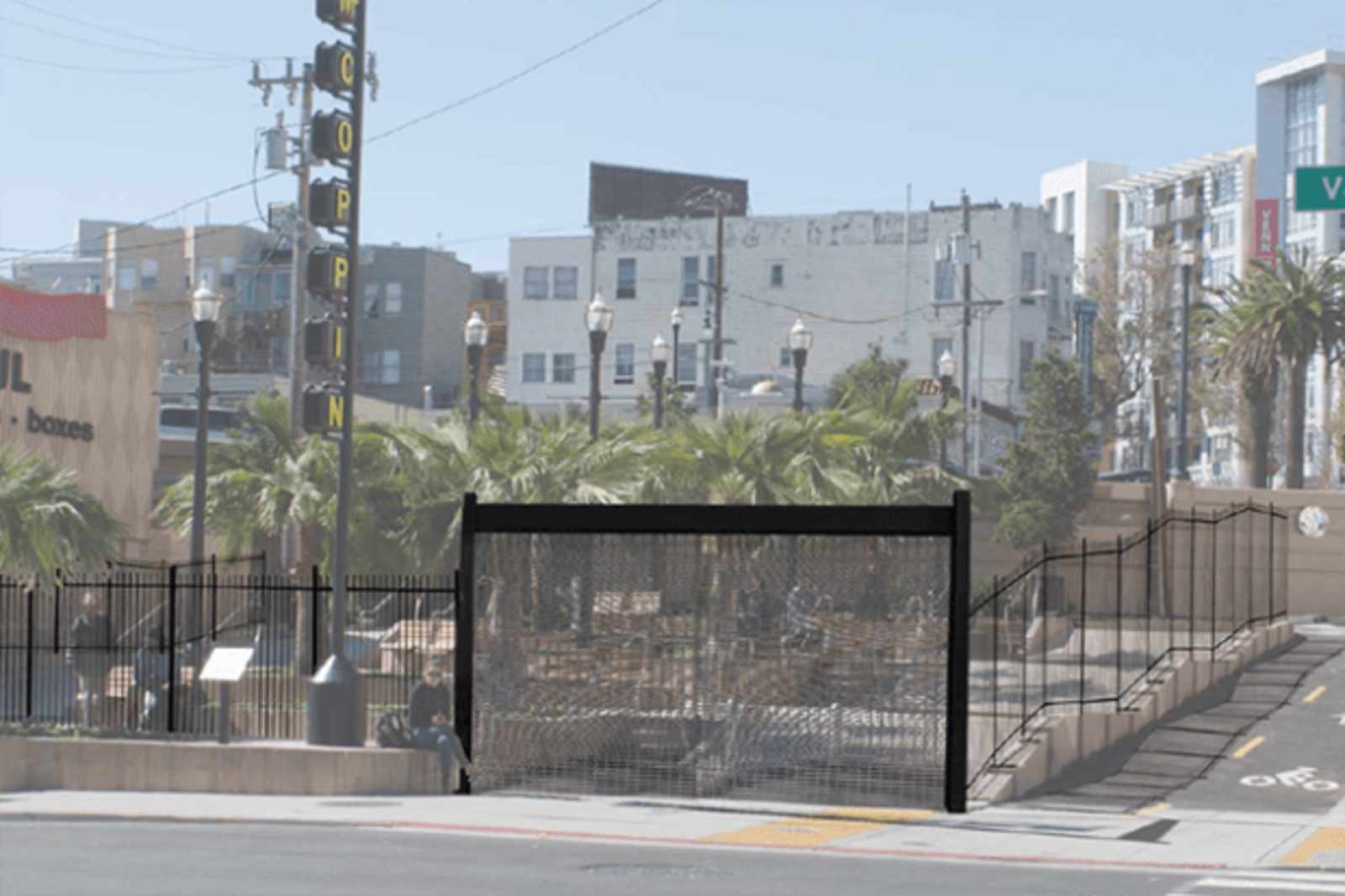 If at first you don’t succeed, try and try… oh whatever, who fucking cares. After struggling for several years to keep the homeless out of McCoppin Hub Plaza, Hoodline reports that the city has finally given up and just shut the thing down. Indefinitely.

According to John Updike, who heads the city’s Real Estate Division and in that capacity is in charge of the public space at Valencia and McCoppin Street, the plaza is now considered a construction zone and is off-limits to the public—as the chain-link fence that surrounds the park makes clear.

The chain-link fence is reportedly a placeholder until a permanent fence can be installed at a later date.

The city initially had high hopes for the mini-park, and rolled out the welcome mat for food trucks. The trucks never came, however, and homeless people began congregating there instead. But not to worry, Updike assured Hoodline that the indefinite closure is not at all about keeping out the homeless. Rather, it’s about public safety.

“There was a lot of abuse of the site and intimidation by people that frankly were doing illegal activities,” he told the publication. “There’s a lot of illegal activity that was occurring and it was to the detriment of the neighborhood being able to enjoy the rest of the open space.”

And while some may view the closure as a massive failure on the part of officials to utilize public land in a city where space is at a premium, perhaps this can be seen as a bold new crime-fighting strategy. Simply fence off areas where unsavory characters congregate and voilà, crime will disappear.

Now all we need is enough chain-link fencing to enclose 49 square miles, and we’ll be good to go.

[Rendering of an imagined fence from 2015: San Francisco Public Works via Mission Local]

I’ve finished this blog post and i additionally
undoubtedly need even more! I think of on my own to
be a really picky audience as well as your job outperformed
my expectations. The final message I bear in mind to spark generally the
exact same emotional states has actually been https://xfreeslots.com/software/merkur/. I desire to give thanks to a time effectively placed in. Maintain composing!

I am not surprised at all. This is the type of filthy disgusting behavior, that I have always expected from crooked politicians. What exactly did that idiot meant by illegal activities that were occurring in that place? Murders? Muggings? Rapes? Little kids been sexually molested? What was it? And please, don’t tell me anything about drugs. Or prostitution. I don’t want to hear any of those old sorry excuses used by crooked politicians all of the time to take away our freedoms. Anyway, how much is that small piece of land there worth, mister John Updike, from the city’s Real Estate Division? Wait, the city’s Real Estate Division? Ok, I get it now. The only abuse, and intimidation here, is the one been committed by these crooked government people. The right thing to do in this whole situation, is to just back off, and let these poor homeless folks have that place. But, I know politicians, so I know that they won’t do that. They can’t. It is not in their nature. They just can not be good decent human beings like everyone else. They always have to create some scheme to make money. And this is exactly what this whole thing is really all about. Don’t let them tell you otherwise.

Oh, I had been researching the topic for some time, and
this article helped me a great deal. I’m so delighted to get everything I was
searching for in this article. I’ve previously read the
post here https://cpasbien.reviews, however, your article
is deeper about the comprehension of the topic field.
Thankyou so much with this soil research!

You may possibly have to go back everyday for a couple of
days to get ALL your cash.

Good day! Do you use Twitter? I’d like to follow you if that would be
okay. I’m definitely enjoying your blog and look forward to new posts.

Wonderful blog! Do you have any recommendations for aspiring writers?
I’m hoping to start my own site soon but I’m
a little lost on everything. Would you suggest starting with
a free platform like Wordpress or go for a paid option? There
are so many options out there that I’m totally confused
.. Any tips? Thanks a lot!

You really make it appear really easy with your presentation however I find this topic to be really
one thing that I believe I’d by no means understand.
It kind of feels too complicated and very huge for me.

I am taking a look ahead to your subsequent publish, I’ll attempt to get the cling of it!

What’s up everybody, here every person is sharing
such knowledge, therefore it’s nice to read this weblog, and I used to go to see
this blog all the time.