McCoppin Plaza Is Not For The Poor, and Will Be Fenced Off In A Bid to Keep Them Out 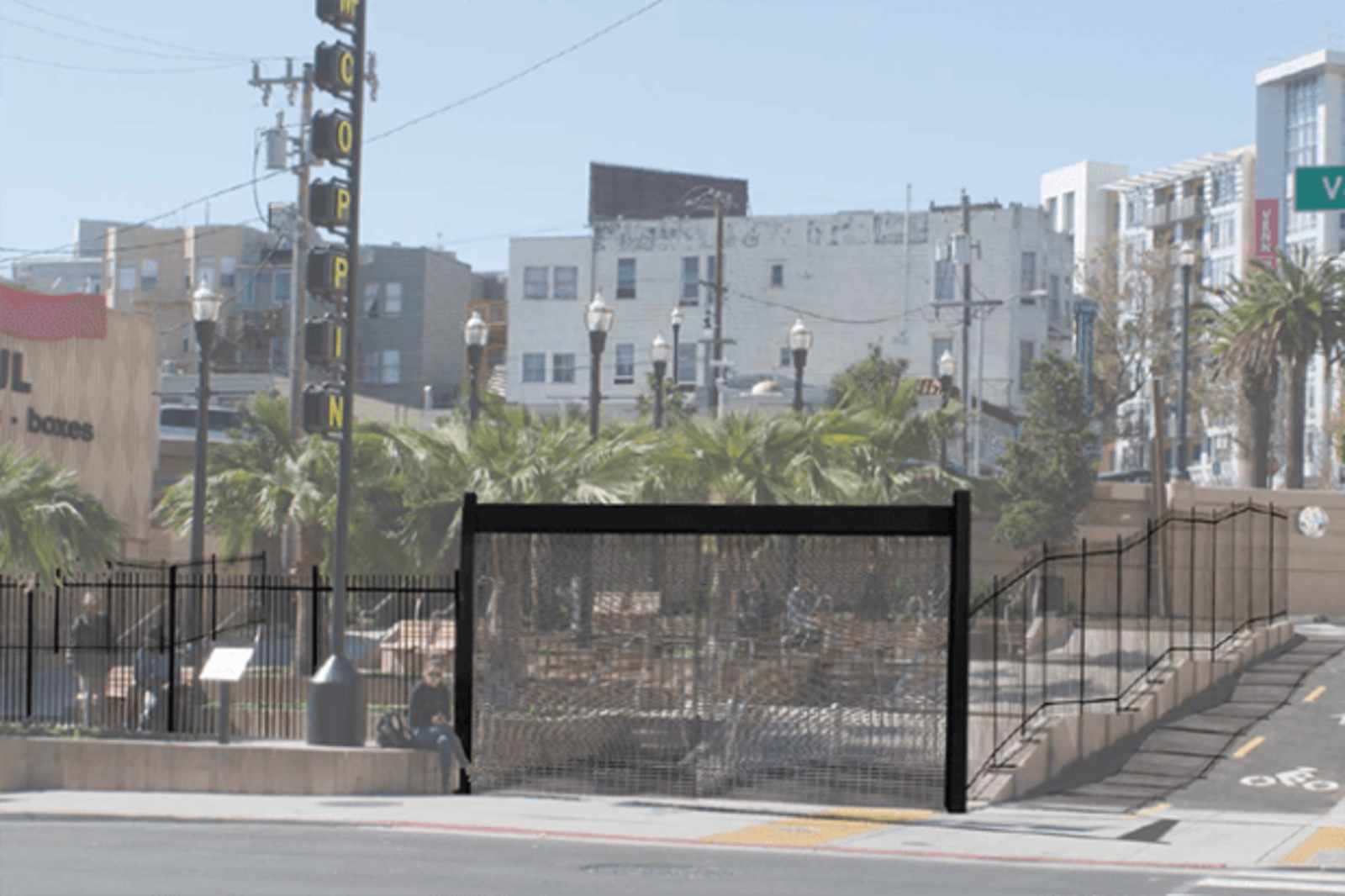 McCoppin Hub Plaza, the public space on Valencia just before Market Street, will be fenced off by the city in a bid to prevent the homeless from making use of the public resource. It seems that the homeless, who, lest we all forget, are guilty of the horrible sin of not having homes, were congregating in the plaza. And we can’t have that, can we? Especially in a spot like McCoppin Plaza, whose seemingly only good use was to provide a gathering space for some of the city’s less fortunate.

Though it will likely take six months or more to put up the fences  – the designs have not yet been finalized – Supervisor Jane Kim said at a community meeting Tuesday night that her office had heard loud and clear from neighbors. While the city works to address its homelessness problem, she said, fencing the plaza makes sense to keep homeless people from loitering and littering there and vandals from causing damage. […]

Prospective plans include an eight-foot fence and a variety of gate configurations, with either swinging gates and a roll-up barrier, for the two wide slanted driveways. […]

Several neighbors had long wanted a fence, and were growing impatient with the fact that none had yet been erected.

Thankfully those wonderful people at city hall have heard the anguished cries of their (housed) constituents and rushed in to save us from the horrible specter of poor people hanging out.

And once that gate is closed, it’s likely to stay closed. Again, from Mission Local:

Unless new programming steps in, there’s a good chance McCoppin Hub will stand empty, and therefore fenced, most of the day. Events in public spaces tend to dwindle in the winter months, said [Robin Havens of the Office of Economic and Workforce Development].

Glad that’s been taken care of.

But how did we get here in the first place? McCoppin Plaza was previously just little old McCoppin cul-de-sac, and, according to SocketSite, was rezoned early last year with the goal of turning the space into “the mixed-use McCoppin Hub Plaza, with pads for food trucks, farmers markets, or other community events.” However, after the renovated plaza was unveiled, the much-hyped food trucks never showed up, and the homeless returned almost immediately. The space was then fenced off and padlocked in April of this year.

Mission Local explained how (the lack of) food trucks failed to provide the necessary energy to transform the space:

Part of the vision for the plaza as a public space was to have food trucks from Off The Grid set up shop there like they used to on some weekends.  The trucks were so highly anticipated that Robin Havens, from the Office of Economic and Workforce Development, said the design of the park was amended to better accommodate them.

But the food trucks aren’t showing up. Ken Rich, also from Haven’s office, said repeated requests for Off the Grid to send some trucks to McCoppin have been unsuccessful because the trucks can simply make more money at other locations.

If the new plaza isn’t perfectly suited for food trucks, maybe the city can spend more money to turn it into a space that is. I hear parking lots are popular.

In retrospect it’s blindly obvious that we needed to build housing for the homeless far more than we needed yet another food truck parking lot.

Hey Uptown, stop apologizing and defending poor public behavior. If “congregating in the plaza” is code for shooting up and sh-t in landscaping then yes, that’s what happens in the plaza now.  This isn’t about homeless just “hanging out”.   I saw a family exit the apt building on the plaza (the one with Maruni’s) a few weeks ago and the 6yo kid had to be lifted by his dad over a guy while the guy in the doorway was shooting up.  Just hanging out ….. Yeah, right…..

To underscore what Tom said above, one drunk and belligerent homeless dude at the new Dolores Park encampment just puked then smashed his liquor bottle on the pavement near he tennis courts. I said politely, “hey please put the glass in the trash” and he started swearing  me and my 6yr old daughter.

Its bullshit to think that not accepting bad/drunken public behavior is somehow unsympathetic/unsupportive to the poor.

@Rob Lord - You saw a guy puke and smash a bottle then you asked him to “please put the glass in the trash”? Hahaha, your expectations are insane. What else do you waste your time doing?

I often find that people who are puking and smashing bottles are quite receptive to suggestions about recycling and what not.  Sure every once in awhile my face is beaten to a bloody pulp, but 9 times out of 10 they yell out in acknowledgment.

Or the parks department could fire some of the insanely high paid facebook watchers called managers, and bring back rec directors.   The rec directors can identify and deal with bad apples.   Most of them are homeless.

Also, Lordy, people open up your eyes, if you don’t seem that there are a higher percentage of relatively functioning people homeless, then there used to be, then take out your buds, get out of your uber, and look around.

What a waste of money.  I’m sure that fence is going to cost a shit load.  So much better things that money could be used for like beautifying parts of the Excelsior.  It seems to me that neighborhood groups are constantly trying to apply for city grants jump through hoops to make things nicer, but putting up a fence to keep the homeless is no problem.

There are regular homeless spots all over the city. So how do we decide what gets fenced off and what doesn’t? Rhetorical question; we know the answer - loudest NIMBYs.

Why not just paste a link to the mission local article instead of pretending to be a journalist?

This model seemed to work out pretty well for the Huffington Post.

The homeless are a real problem and we should do whatever it takes to keep th as far away from residents and visitors. They really make our city disgusting and Jack, I dont appreciate you writing this in a tone where you make the city sound evil for trying to keep out the homeless. Finally , this city is actually doing sonething. It’s attitudes like yours that keep shit from happening. Why aren’t we enforcing sit-lie????? It’s the law. i gave to abide by the law, why don’t the homeless?

The law, in its majestic equality, forbids rich and poor alike to sleep under bridges, beg in the streets or steal bread.