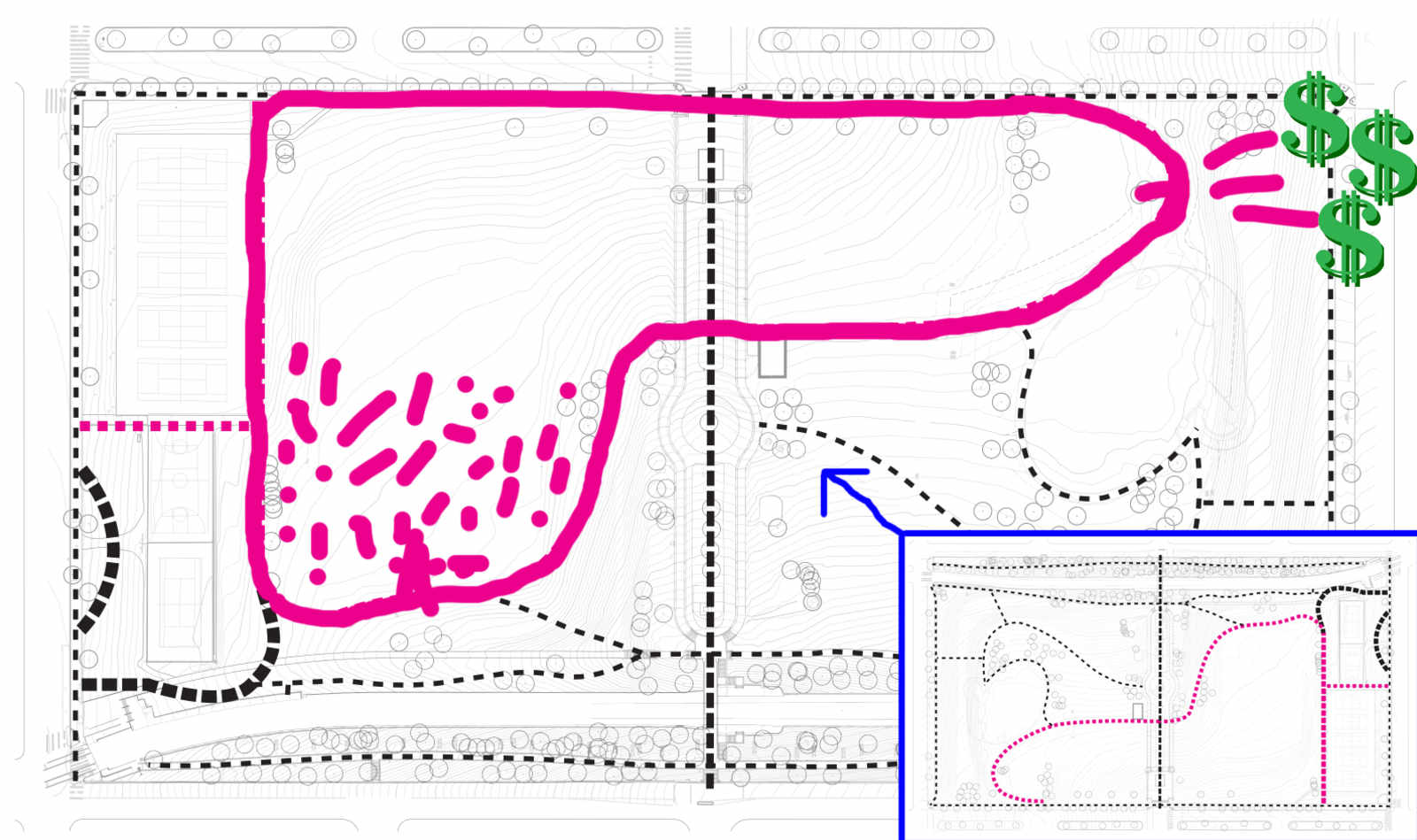 Last night's Dolores Park renovation community workshop was mildly successful.  Everyone seemed to agree that we need a new set of bathrooms by the basketball courts, people want picnic tables by the playground and current bathroom building, and a bunch of people want to dynamite that disgusting, old, piss-scented structure that sits in the middle of the park.  But there was no consensus on the proposed 14-foot wide path that snakes through the middle of the park.  Most were unhappy with it, but Rec. & Park basically said removing it from the plans was off the table, for reasons justified by ADA compliance.  One official from RHAA, the architecture firm tasked with redesigning the park, went so far as to accuse me of “discriminating against people with disabilities” for questioning the true necessity of paving a road wide enough for an 18-wheeler through the middle of the park, especially considering the Symphony has been erecting stadium-sized stages in the park for years without such a path.

“I know you're young and think such a thing as needing a wheelchair could ever happen to you, but it's unfair and mean of you to ignore these people.”

It's a brilliant tactic though.  When someone questions a superhighway through an area used by dog-owners, picnickers, frisbee-throwers, the elderly and the young alike, just accuse them of being heartless swine indifferent to the plight of the wheelchair bound.  Hell, I was so blind-sided by the baseless accusation that it shut me right the fuck up.

It wasn't until after the meeting had concluded that the true debate around real park issues began.  Neighbors mulled around discussing why tennis court activists, dog-owners, soccer advocates, and historical preservation freaks were getting a blank check in this process.  The rumors around the steering committee is that Phil Ginsberg is “boys” with tennis players, so the design team is forbidden from touching anything about the tennis courts (which is why the Bike Polo player's requests have been marginalized, despite the sport's growing popularity).  There's no public debate about whether or not we should carpet bomb the current facilities building.  No discussion about the “importance” of “historical” structures in the park.  No meaningful debate on whether or not we should be building “paths,” concrete picnic areas, or permanent portapottie facilities (instead of adequate structural bathroom facilities) in the park.  Rather than knowing the issues, people just walk up to a poster at the front of the room and post where their “group” would like to see new amenities, then they raise their hands saying why they support those things.  There's rarely an informed back-and-forth that follows, never mind proceeds. 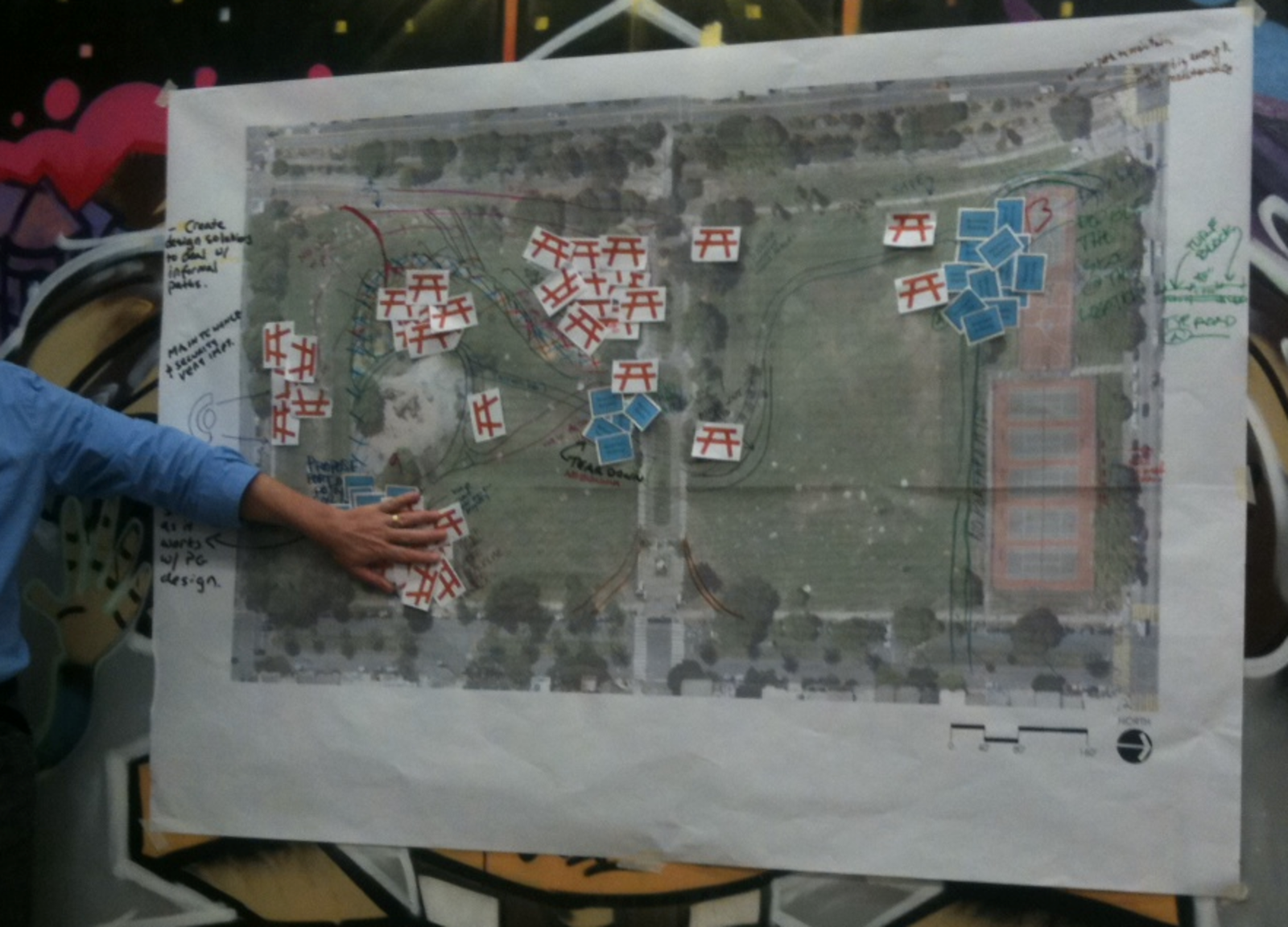 As people made their way out of the building, a friend pulled me over and pointed out a distinct feature in the new park: “You notice if you flip the paths plan upside down, it looks like a giant dick just fucking us over?”

that tactic is a classic in Sf. it makes you the bad mean man, and it plays to people’s wannabe liberal sensitivities. never mind the fact that something better would serve EVERYONE better, but that would require park and rec to take time away from privatization and trading access to lobbyists for contractors to do this thing called THEIR JOBS properly!

This is all just theater meant to provide the patina of community participation for decisions that staff made long ago.

Nice coverage. Thanks for staying on top of this. Staircases, and 14-foot wide paths and food courts sound ominous.

On the one hand, obviously I understand why everyone wants input in this process, and I appreciate you going there and representing “our” point of view. And the reporting you’re doing on it.

But mostly I just think: it’s Dolores Park. It will always be Dolores Park. If you put a 14 foot wide path through the middle, who fucking cares? It will still be Dolores Park. A 14 foot path in a park that’s something like 600’ x 300’ (I dunno, guesstimating) seems like not really that big of a deal.

This feels like bikeshedding to me. Dolores Park will be different. Maybe you won’t like it quite as much. But you’ll get used to it and after a few years, it’ll still be the place you go on a sunny day to drink beer with your friends, and will you even really remember all of this?

Yeah, fair enough. I’m totally with you on the “thoughtful debate” part. I’m just not sure drawing a huge penis spurting dollar signs qualifies as such. But it’s funnier that way, so maybe that’s the point. And I just worry that issues like this path are a distraction from the larger issues. Like, are they going to put a McDonalds in the middle of the park, or whatever.

Expect that a later meeting, he explains that is is because of the ADA that $14 million dollars buys so little.

a wheelchair accessible trail is not required to be 14ft across. Ada widths in canada are larger than in the US because Canandians have the foresight to realize that humans are getting fatter. Their ada doors are all 4ft now, we’re still at 36” openings. Whatever point is dude is bullshitting with his ada requirements. Are they going to have automatic door operators of the bathrooms? Closers with under 5lbs of opening pressure? Who is checking the code on this shit? Some dumbfuck building inspector who can’t use his door pressure tester?

I understand access and lawsuits for ada violations are a bitch but this guy is bullshit.

Nooo Way, Fat hockey players are not 14 feet wide!! Ain’t that fatter in Mississippi neither. or Kentucky

Most of the changes will still be better than what you had in Barstow, New Cuyama, Susanville, Slab City, Methville, Shack Holler, Dust City, Flint, Gary, Occalacachokapeepee, or Boston (in the winter). After all, this was once a cemetery.

I completely agree, but what are precedes?

At the point where you’ve creating a “steering committee” to redesign a park, you’ve already gone off the deep end.

Really, all the park needs is a bit less mud and some extra bathrooms. Nothing else really “needs” to be changed no matter how hard the neighbors want everyone else to think so.

The workshops are a compliance tactic by RPD. So they can say that you are designing the park with them. Whatever you say they will do whatever they want.

Going to these meeting is a waste of time. I know that you don’t want it to be like that but that is the way it is.

The only way to ensure that our park doesn’t get fucked over is to find a way to attack Phil Ginsburg, or get him fired. The only person who can do that is the mayor.

Who will lead the people in this issue?

Years from now when DP is fucked and sucks and you will look back and you will say that you wished someone stepped forward to lead and fix this. Yup.

As Chicken noted above, the city and ALL of our parks will be better off the moment we get rid of Phil Ginsburg and Mark Buell.
This should be a consideration when choosing the next Mayor.
Does anyone know which candidates might clean house on these worthless sacks of shit?
Ed Lee certainly doesn’t seem to have a problem with them…