The Last of A Dying Breed

Bottom Of The Hill Fights For Clubs, Community, and Culture 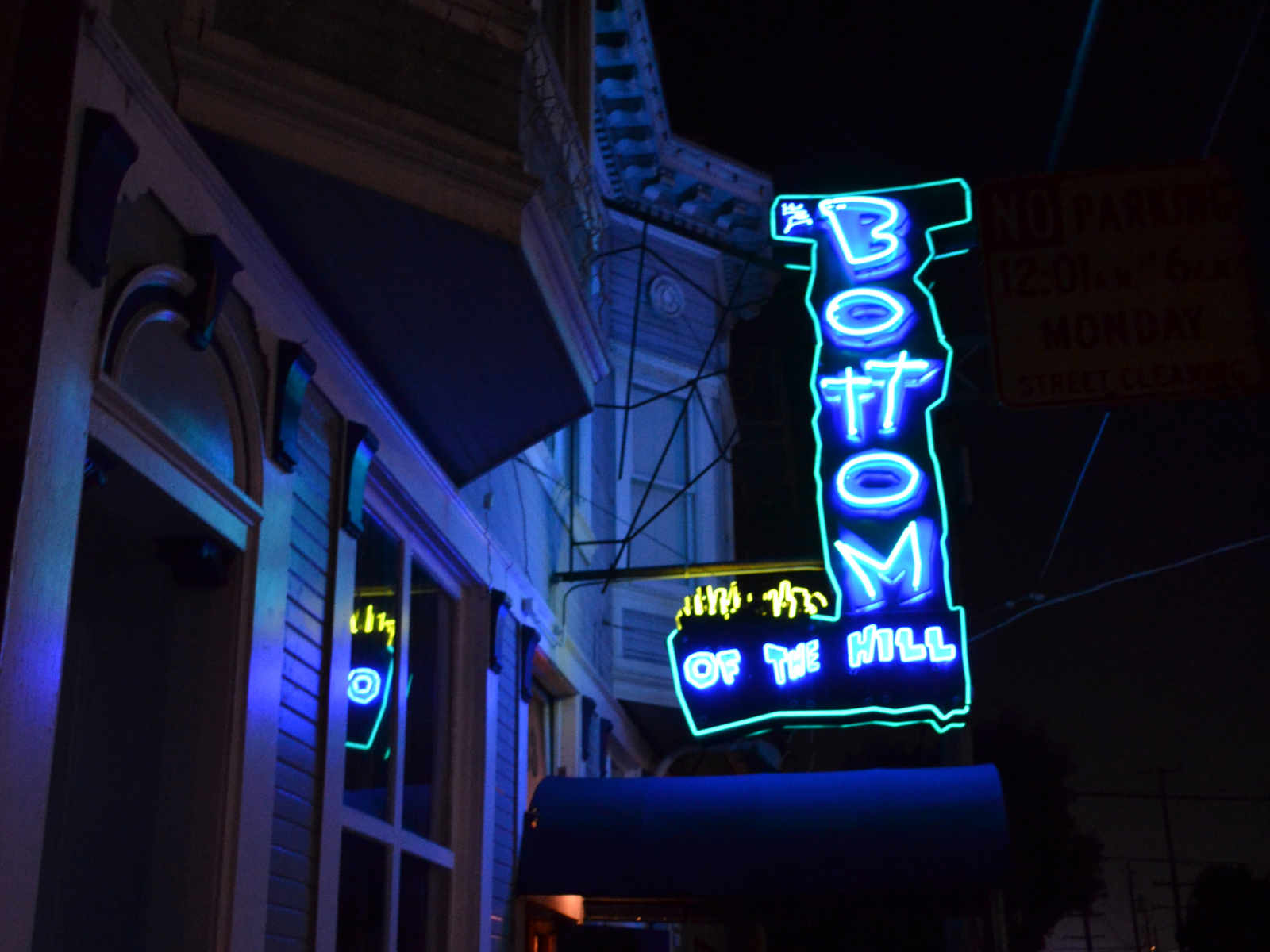 Scanning the news, we picture an inverse relationship between fancy condos and musicians. The more condos spring up in San Francisco, the more musicians flee to the East Bay, LA and Portland in search of a more reasonable cost of living. It’s easy to be cynical about the whole thing, but cynicism alone doesn’t solve the problem. Amidst all the recent club closures, Google Bus protests, and other signs of the apocalypse, Bottom of the Hill has been fighting for their life, and yours. You just didn’t know it.

One day in late 2010, a single person moved into a condo behind Slim’s. And within months, Slim’s was shelling out nearly $260,000 on soundproofing so those neighbors didn’t call the cops every night. The game has changed. San Francisco music venues now have to play a high stakes, Whac-A-Mole-style game of stomping out problems before they threaten their business.

Bottom of the Hill takes tales of woe like Slim’s seriously. “My heart breaks every time a nightclub closes because of neighbor complaints,” Bottom of the Hill co-owner Lynn Schwarz told Uptown Almanac. “The law doesn’t differentiate between real problem clubs, and clubs who are doing their best to keep noise levels down. One neighbor with a grudge and zero tolerance can single-handedly get a club shut down.”

The only way to stay alive and avoid a costly confrontation is to get ahead of it. Schwarz attends meetings about the three proposed developments—totaling in over 400 new units—in the club’s area of Potrero Hill, and sets expectations for developers as best she can.

“We let the developers and architects know that we require extra soundproofing and other structural considerations in order to support their projects. We also have banded together with our neighbors, both fellow merchants, through Potrero Dogpatch Merchant Association, and neighbors, through the Potrero Hill Boosters and a group that recently formed called Save the Hill.”

Looking To The Future, From The Bottom Up

Bottom of the Hill is currently in no danger of closing down. They’re confident that their 20+ years as a San Francisco music institution says something about their staying power. And the huge ace up their sleeve is the fact they own their building, making them immune to exponential rent increases that have put other clubs out of business.

But they’re not naive. They see the changing tides, and recognize that they might have a few fights in their future.

“I think the Bottom of the Hill nightclub will survive past whatever happens on our block in the next five years. That doesn’t mean I’m not scared of the annoying fights we could have ahead with neighbors who knowingly move in across the street from us,” said Schwarz. “The city has got to find a way to stop coddling neighbors whose level of tolerance to noise is best suited to the suburbs, and not a thriving city. This city will cease to be interesting when most of its nightclubs have been silenced.”

Lynn sees hope for the music scene in the possibility of extended BART hours, the strength of community organizers and fellow club owners. But the real fix is the simplest: “All it will take to help out is for you, as a music lover, to make it a point to support your local music venues and your local bands.”

I’ll leave you with one final Mad Lib for the future.

If [developers / employees of aforementioned giant tech company] are so eager to live in [desirable neighborhood] that in the process they close down the [cultural institution(s)] that made them want to live there, why even move at all?

I remember why people originally flocked there in the early to mid 2000s.  Getting hard to find a 1 bedroom there for anything near what they used to be, soon that city will face what we’ve been facing.

You can still kind of get a room for 600, but it’s not as easy as you would hope, and it’s nothing like it was before the vultures descended upon it after Fred Armisen told them it was cool.  It’s the town that introduced PBR to the US as a thing to drink, and now it’s a town that loves its $10-12 cocktails as much as we do.

Places available, but not in the ‘hip’ parts of town, which are now bistros.  SF for reference http://sfbay.craigslist.org/search/sfc/roo?maxAsk=600&sale_date=-

The west coast will soon be uniformly unaffordable, and the next hip cities I expect will be in depressed old industrial centers like Detroit, Pittsburgh, and etc…  I’m going on a trip to Detroit in a month to check it out actually, supposedly pretty fun as is.

As for “If [developers / employees of aforementioned giant tech company] are so eager to live in [desirable neighborhood] that in the process they close down the [cultural institution(s)] that made them want to live there, why even move at all?”

The problem with SF is that no longer can people largely move to areas they find enjoyable, people now move to ANY area that has apartments at a price point they can afford.  There’s just no space in this city, and not enough housing to accomodate.  So people that might prefer to live in Pac Heights might live in the 1 bedroom you wanted on Harrison and 23rd.

To add, some of those Portland listings you see are not mapped properly (normal craigslist annoyance).  For instance a lot of the ones listed at below $600 for just a room somewhere are actually outside of Portland, in Tigard for instance.

Thanks for the thorough reply. Obviously, it’s a pretty complicated problem with a bunch of levers, and those price levers are different in every city. I was just commenting that musicians have been flocking to other cities and out of San Francisco after club closures, etc.

The trends and investment patterns are obvious and it is still relatively affordable to BUY in Portland, The East Bay, etc etc.

It’s good news that Bottom of the Hill owns their building. The worst thing that will happen is they may decide to sell it for a huge pile of money and buy another one in Bayview or something.

Even though they own their own building, Ammiano & Leno introduced a resolution so that businesses are no longer under Prop 13’s low property tax rates.  Which will mean that they will sell unless they can come up with the high prop tax rate they will pay.  The value of their property, which they bought 20 years ago for say 400k, will now be worth over $1m or even $2m, property tax is about 1.5% of the WORTH of your property, which would be quite a hefty fee for them.  I doubt they make enough at the venue to pay their property tax, let alone, employees, bands, etc.Now OTOH, if they were SF Trust Funders, which is possible, they could hold on, and spend their  trust funder/daddy’s money but I doubt they’ll do that.  I believe in that location, their property is easily worth $2m, I mean homes in the SUNSET and RICHMOND are worth that so I’m basing it on that.And it sounds like the owner knows she won’t be there within 5 years.

That last Mad Lib relies on a faulty premise. Many of the NIMBY complaints about noise come from people in their late 30s and older. They are not tech workers, but people who really have nothing better to do than complain about something that should have been disclosed in their condo contracts. Of course developers and tech employees are an excellent punching bag, so why not blame them instead?

I was pointing more to the fact that any/all tech workers are the punching bag in every article, not necessarily stating that it’s deserved. A ton of tech workers and developers play in bands that have shows at Bottom of the Hill. I’m sure there are also some that are making the noise complaints, too. The MadLib was more of a wink at tired formula of articles about tech workers and the culture of SF.

Conflating well-paid tech workers with those making the complaints is a pretty lazy (and I would argue, inaccurate) assumption. Speaking for myself (as one of those “techies” everyone is so quick to judge), I love music and there’s no way I’d want any music venue to fold up shop. I currently live near the Independent and I love the proximity to shows. I knew what I was getting into when I moved in. If, for some reason, I need to go to bed early and don’t want to be disturbed by noise, I use these amazing little things called earplugs. Done. Take your tech hate and knee-jerk blame somewhere else.

Dear Jeff, hours before your knee jerk backlash to the backlash comment, the author wrote this:

I was pointing more to the fact that any/all tech workers are the punching bag in every article, not necessarily stating that it’s deserved. A ton of tech workers and developers play in bands that have shows at Bottom of the Hill. I’m sure there are also some that are making the noise complaints, too. The MadLib was more of a wink at tired formula of articles about tech workers and the culture of SF.

I think most are missing the point that these venues were built in industrial/commercial/poor loud urban areas that people never cared about before. The Attic and Casanova lost their dance nights because 1 person, the knockout had to spend thousands because some chick near there didn’t like the sound (I also hope she threatned muni, the homeless and everything else on Mission), BOTH, GAMH, Slims, Hemlock (who now has a midnight curfew for bands) are all suffering from the bland neighbors who feel ownership over their block because they over paid for an apartment. These clubs devoted their time, money and have made this city awesome—- New residents need to embrace the city not try to make it to their liking.

There’s a couple of other thoughts on this, the 4 sister cities are Vancouver, BC/Seattle/Portland/SF.All were broke as hell cities before, although SF/Van were still expensive, before as in “before Tech”.  Now they’re all expensive as hell, they are all mirror cities of each other, and anyone believing that “Portlandia” would last forever in utopian brokeness is dreaming.Just the nature of things, get into tech or be forever looking for other places to live.  Also be sure to buy a place.