Elbo Room at Risk for Demolition to Make Way for Condos 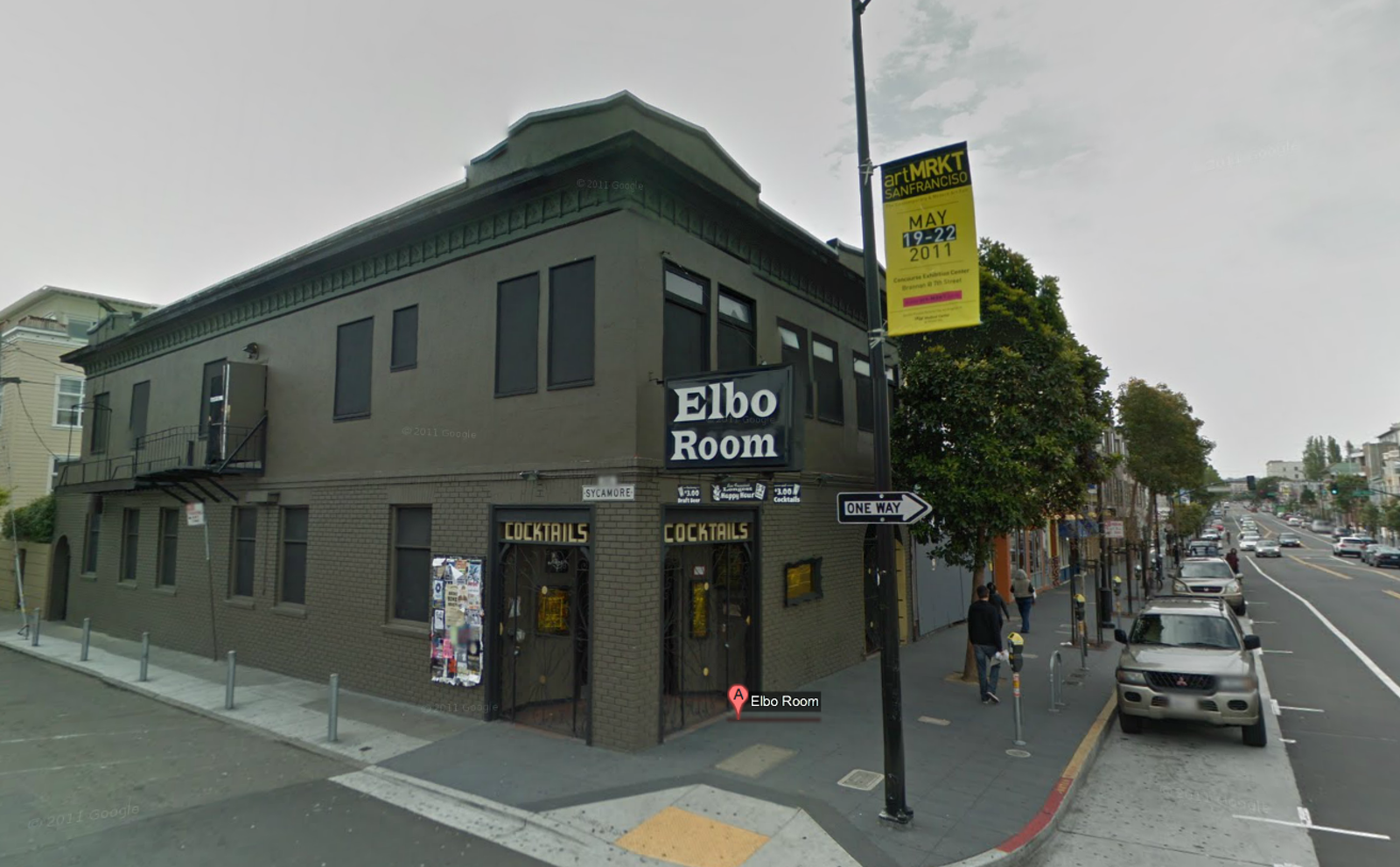 Valencia Street continues its turbocharged tailspin into terrible as developers and landlords club the last shreds of tolerable into a permanent state of soothing unconsciousness.  The latest victim is poised to be the undeniably important two-story venue Elbo Room, which SocketSite reports the owners have “quietly drafted plans to raze the bar and construct a new five-story building in its place.”  The grim details:

Early plans for the development include nine (9) residential units, three one-bedrooms and six two-bedrooms, ranging in size from 500 to 1,000 square feet over a 770 square-foot commercial space and parking for six (6) cars on the ground floor.

While the existing building at 645 Valencia Street wasn’t deemed to be historic when reviewed as part of the Inner Mission Historic Resource Survey in 2011, the Planning Department has since “received additional information that suggests that the subject property may have associations with the history of Lesbian, Gay, Bisexual and Transgender (LGBT) individuals in San Francisco.”

After SocketSite's story broke, Elbo Room quickly shot it down, writing on Facebook:

Once again, despite what the real estate blog says, Elbo Room is Not Going Anywhere, Anytime Soon! But thanx so much for the concern, the kind words, and the support! We appreciate you!

Of course, “anytime soon” is subject to interpretation.  “Our report isn't based on rumor or speculation,” SocketSite fired back. “But rather the Preliminary Project Assessment for the development which was submitted to San Francisco’s Planning Department for review.”

We all agree building more housing is important, and landowners have the God-given right to cash out when the market is drooling over Mission real estate like a starved dog.  But not like this.  Nine units is a drop in our drought-stricken bucket, and won't move the housing cost needle anywhere.  And what do we get?  The undignified death of another venue and stripping away of one of the very institutions that make people want to move here in the first place.

At least the bus stop is nearby…

You had to use a screenshot from Google street view didn’t you?

Nooooo this is a total bummer. There are so many empty lots in the Mission — can’t we build on those before we start razing bars?!

I thought the Elbo Room owned that building. Guess not.

This site has convinced me that anyone born after 1975 is a probably a douche and your parents failed you big time.

Nine units is a drop in our drought-stricken bucket, and won’t move the housing cost needle anywhere.

That was my first thought as well, there’s no way this is a good trade off. And street-level parking in SF? What a waste of valuable space.

Apparently anything over 9 units doesn’t get approved by NIMBYs…

Anything over 9 units and affordable housing requirements kick in. Coincidence?

The Elbo Room used to be Amelia’s, a lesbian bar. They closed about 20 years ago. Every pride Elbo room replaces their sign out front with the Amelia’s sign. Pretty cool and a pretty awesome bar, at least not on the weekends.

Wasn’t Amelia’s at 23& Valencia? Laterbecame Radio Valencia then Yuppie place Beretta. Elbo was Elbo since the early 90s at least

The Elbo Room used to be Amelia’s. It became the Elbo Room in Dec.1991. Both bars were owned by Rikki Streicher, a leader in the SF lesbian community. Rikki died in 1994 and left the business to her partner. Both the business and the building were subsequently purchased by the then manager of Elbo Room, who subsequently sold the business but retained ownership of the building. It’s his building, but I’m sure Ms Streicher would be rolling over in her grave at the thought of it becoming luxury housing units.

We are fully aware of everything going on….But this was only a proposal and they are not acting on it anytime soon, if at all.

So what’s the point?

Ah yes. The Elbo room gets evicted. The best example of the shit storm in the mission. Oh well progress….

From what I was told by the owners of the venue (not building, but the bar), the building owners submitted an inquiry to see if it were possible/feasable to replace the building. This is like asking for permission from your mom to paint your bedroom. It doesn’t mean you already have paint chips picked out and a date set to paint it, it just means you are considering it.

The building owners, as much as I would hate to see the bar go, as I throw shows there and have friends that own/work at the bar, have the right to pursue their options. But this doesn’t mean they are planning on doing anything anytime soon.

But you have to admit that it sends a certain message to even *ask*. Particularly when you have, say, two friends who have already asked to, shall we say, repaint the bedroom *for* you.

Why not tear down Community Thrift and bulid there instead? Much bigger footprint for living space. Then the a-holes that move in there can complain about the noise from the Elbo Room and get it shut down

Community Thrift was there first. I will cut a byatch who tries to get rid of that.

I seriously doubt God exists, but if I’m wrong, I doubt God gives a crap about property owner’s “rights” to cash out/sell out in a booming market. What’s God got to do with it?

What a misleading and badly researched piece of “jounalism”. This article was cleary intended to do one thing: inflame distrust and anger between diverse groups of residents in this city. You’d think the author might have checked with the people he’s writing about before he published it with such a bold and provocative headline. His information is second hand and he is highly subjective and extremely opinionated. This is fear mongering and incitement to distrust, pure and simple.

Kevmo the Inflamer! Sounds like an awesome Game of Thrones character.

Seriously. The Elbo Room is a city institution at this point, one of the cornerstones of the live music scene in the Mission. I would actually step away from the keyboard to join this fight.

I know this is off topic, but someone should investigate/write an article about this http://sfbay.craigslist.org/sfc/roo/4316025749.html

If this whole process continues the people who moved here looking for a vibrant, interesting city will wonder why they bothered. “I wanted to live in “Frisco” despite working on the peninsula because the peninsula is drab and “Frisco” is so exciting. But now it’s not and I’m confused as to why. So confused.”

Anyone who calls it “Frisco” can fuck right off anywhichway.

Frisco Choppers - go tell them that, kook. Go back to the mid-80s and tell them that when they were located across the street from VG projects and their T-shirts said “in the ghetto” on them.
You don’t dictate nothin.

Hey Frisco Choppers, You can fuck right off, anywhichway.

In fact, if it would help, I can even recommend a good place for them to fuck right off TO: Frisco.

You missed the point, but clowned yourself anyway.

How can I miss the point when I make the point?

HAHA! What a Herb. No trout for you.

HAHA! What a Feeb! No seabass for you.

you’re not from around here, are you?

Wrong wrong wrong. Where do you get your information? Your resources are bunk. Fabulous reporting sir.

Did you purposefully lure these people to commit themselves, while you were holding back that 15 pager request.？

A lot of buildings are going to need to be torn down and turned into condos if people want the housing cost situation to get more reasonable. Nine units probably won’t move the needle but zero units definitely won’t. Also, let’s be completely honest here, the Elbo Room kinda sucks. They have some good acts upstairs at times but it’s always miserably hot.

The only problem the Elbo Room has is poor HVAC. And that’s pretty fucking easy to fix, compared to tearing it the hell down.

Well.. they don’t seem very interested in fixing it.

I think everyone who complains about gentrification in SF should move to Vallejo - so they won’t have to complain about it for another 30 to 40 years.

When anyone in SF starts off with, “We all agree that building more housing is important”, you know what’s coming: NIMBY!!!! The general passion for preserving every two-story rat trap in your fair city has produced a very distorted, very 1% environment that, ironically, would be lessened by the larger buildings your panties are in a twist about.

These are going to be more fancy apartments for tech workers, $4,000/month.

City regulations requiring affordable units kick in when a building has 10 or more units.

So of course everyone wants to build yuppified 9-unit developments that kill off anything left of art/music/culture in SF.

That’s why I left SF (after over 20 years) for Oakland.

Interesting. So very few 10+ units get built because it’s a bad deal for developers, and very few 9-unit buildings get built because the local populace go all yuppie-phobic defcon 1 at the mere mention. What do you get then? You get an irrationally low-density city with an insanely distorted property/rental market. Explain to me why keeping the yuppies out is job one but helping the landed mega-rich to get richer is OK?

The owners are proceeding with their plan to raze the Elbo Room; there is a pre-application review meeting scheduled for November 6th from 6-8 PM in the community room at the Mission Police Station, across the street from the Room.