Permitted Or Not, Robot Dance Party Will Perform In Dolores Park This Weekend

With or without a permit, Robot Dance Party will be back at Dolores Park this weekend. So says Chris Hirst, the man behind (and inside) the much-loved robot.

Since the reopening of the northern half of Dolores Park on June 18th, RDP has been ejected from the park on several occasions. Park rangers claimed that the party robot needed an amplified sound permit to continue shaking his circuits in Dolores—a hard reality for the robot’s many fans.

This lack of permitting, something that in the pre-renovation park had never been a concern, even led to the robot being escorted out of the Dolores by rangers on at least one occasion.

In an email exchange with Uptown Almanac, Hirst detailed the bureaucratic hoops—including meeting with Supervisor Scott Wiener—he has continued to jump through trying to get the proper paperwork. However, even his meeting with Wiener and various city officials has not resulted in his receiving the permit the city says is required.

Instead, it seems that Hirst will make do with a temporary solution.

“They’ve gotten held up in getting the permit issued but I’ve been given special documentation which will allow me to perform in the park tomorrow.”

When pressed as to what “special documentation” he had received, Hirst went into additional detail.

“A written directive went out to all the park rangers from the head of patrols to leave me alone while they work out the details upstairs.  I’ll be posting a copy of it on the Robot tomorrow, in case someone missed the memo :)”

It seems that the new Dolores Park is just as welcoming as the old park to the characters that make it great—that is if you are somehow able to secure a meeting with a member of the Board of Supervisors and then have a special directive issued to park rangers on your behalf.

That’s just the problem. It shouldn’t take a special directive issued by the city for Hirst to be able to perform in Dolores Park. That’s absurd. And yet here we are.

I got an email blast from the Supervisor’s office that said, “Rec & Park will grant Robot Dance Party a permit that allows him to use amplified.”    Maybe the only difference is between “will grant {…} a permit” and done, but yeah, “And yet here we are.” 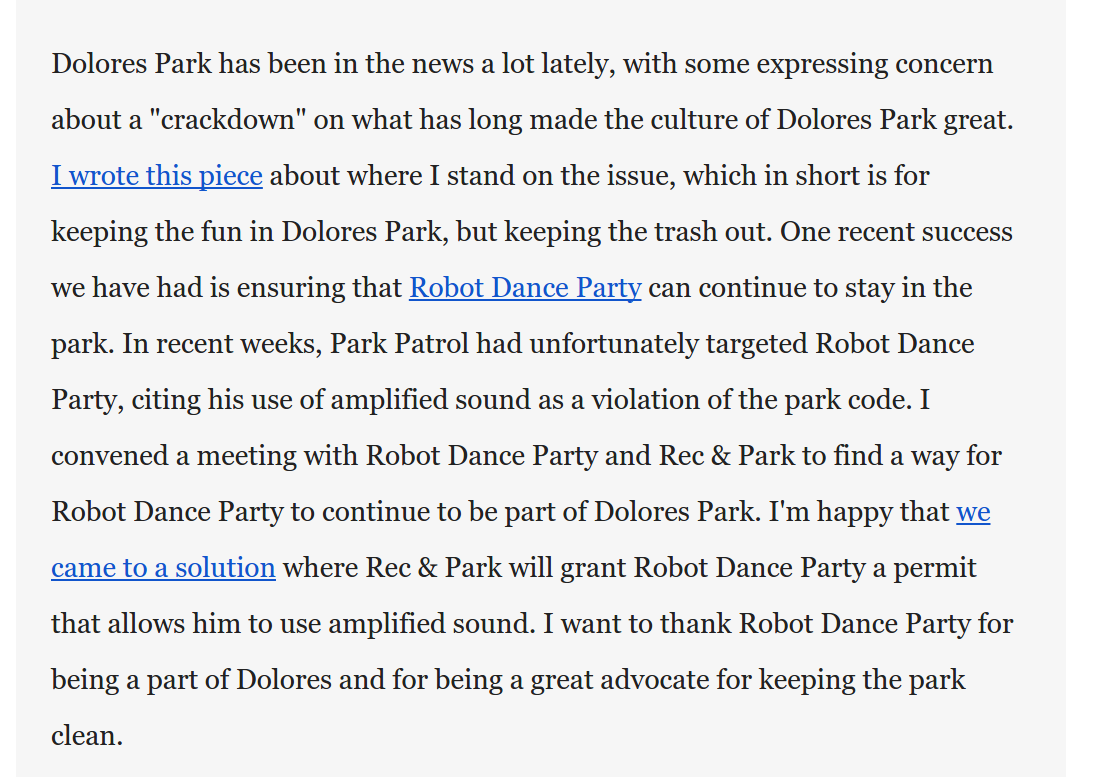 This is what happens when command and control types like Scott Wiener, Mark Buell and Rec and Park President Phil Ginsburg are allowed to blow millions of taxpayer dollars per year on Rec and Park Rangers.

Would you like more bathrooms or trash receptacles to serve the most popular and crowded park in San Francisco? Fuck you!  No extra bathrooms, LESS trash receptacles, and here’s a gang of mall cops to harass you for bringing a fucking lawn chair to the public park paid for with your taxes.

If this is the best SF’s got left, I’d say it’s time to pack it in and let the tech dudes ironically consume “working class park beer” in peace.

Normally I’d say something like “^shit people who moved here in 2008 would say” but after watching those awful dance moves from the humanoids in this video, I just can’t.

Sorry - some dude in a cardboard robot costume has just never done it for me. Despite how funny it must be when sitting with yr bros, throwing back some buzz balls and comparing recently purchased $10 wayfarers.

Not sure who you’re talking to; unlike you, I’m actually from here.

Though me being from here doesn’t mean I don’t suck, it’s just obvious you aren’t because you try too hard/overcompensate (don’t worry, you’re not alone in that, but I’m sure that unsettles you even more). Oh look, now you have me talking to myself.

I’m from Santa Rosa but no longer live in the Bay Area so do with that what you want..

regardless, dancing robot never did it for me.

but you  miss  the point of why this is a newsworthy thing.

The thing that flipped the switch is that Robot was being busted by Mr. Ranger Man,  it created  the fear of overbearing police in a location where a well functioning libertarian culture long existed.

HahahahahhahahahahahahAHAHAHHAHAAHAH. Oh man, libertarianism in a publically funded park. Yeah, that’s QUITE the model there!

You be laughing like you been smoking lots of joints.

I’m definitely not a big fan of the Robot, and less of a fan of those people he inspired to “dance”

I miss peeing in that park.

I can assure you, you don’t have to stop.

I’m shy around those that have bigger stock options than mine.

If only money could help some obtain personality/humor. Sigh.

If it did, you would need more than Zuck.

I have a thought:  if he could join the SF Mime Troupe, couldn’t that grandfather him in for “Making Sounds Nobody Wants to Hear in Dolores park?”

This is what happens when command and control types like Scott Wiener, Mark Buell and Rec and Park President Phil Ginsburg are allowed to blow millions of taxpayer dollars per year on Rec and Park Rangers.

Would you like more bathrooms or trash receptacles to serve the most popular and crowded park in San Francisco? Fuck you!  No extra bathrooms, LESS trash receptacles, and here’s a gang of mall cops to harass you for bringing a fucking lawn chair to the public park paid for with your taxes.

this is why scott weiner sucks, and should not be elected to the state senate, or any office.

his bullshit causes the problem, then he claims to “Fix it” but of course, he didn’t fix shit. in the meantime you have Dolores Park NIMBY douches who get upset at “those people” coming in to “their” neighborhood and who will vote for Scott Weiner because he’s fucking shit up.

Really hope something terrible happens and Scott is sent back to New Jersey where his shit belongs.