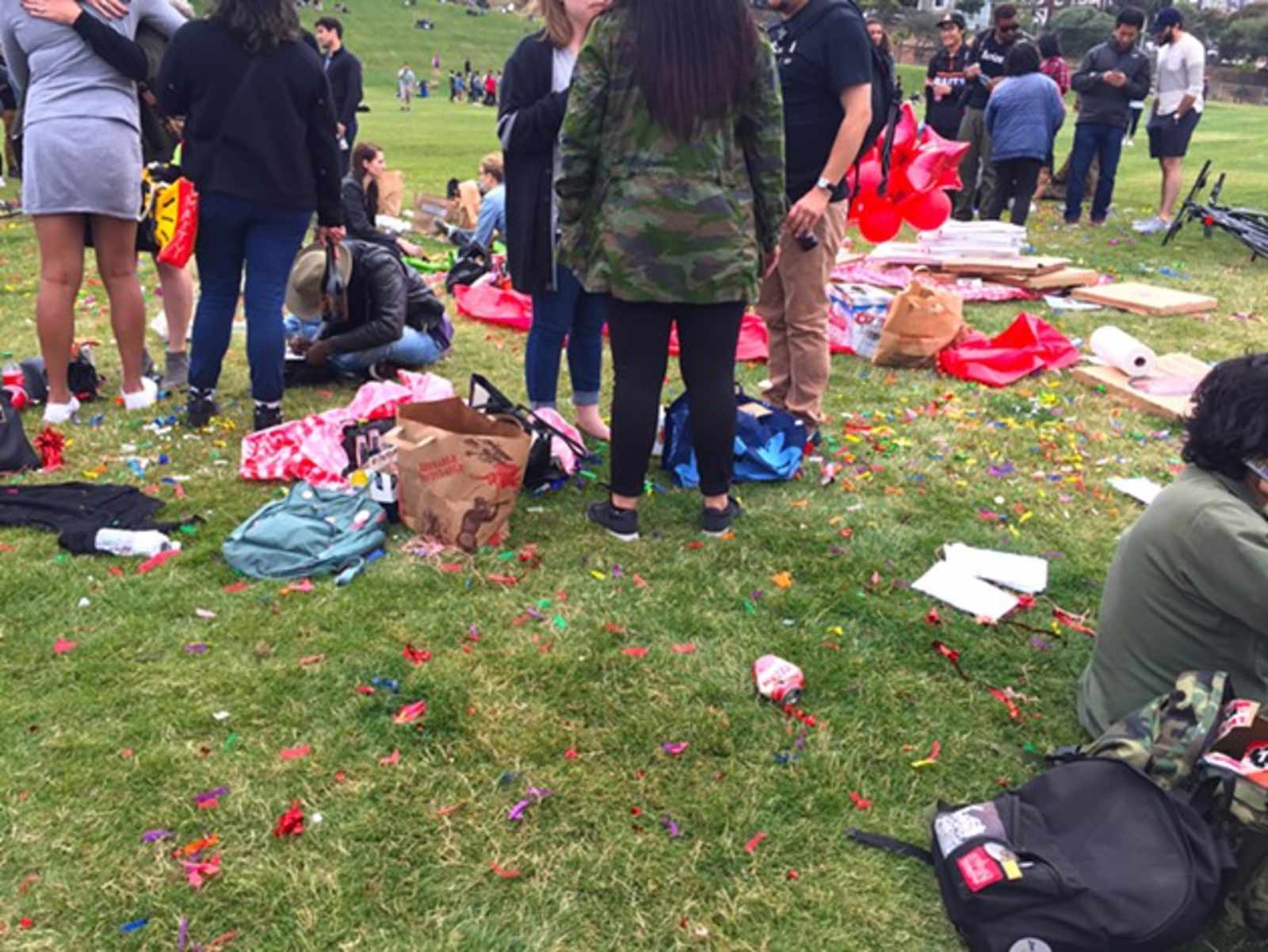 Twice, a Mission District based startup, recently got acquired. And so, like any other self-respecting group of twenty/thirty-somethings newly flush with cash, they threw themselves a party—and trashed Dolores Park in the process. According to SF Weekly:

A tipster tells SF Weekly that Twice, a Mission District clothing resale startup hot off being bought up by eBay, was out in Dolores Park yesterday in full celebration mode, drinking champagne, eating pizza, and launching confetti in the air. But when the party was over, the park remained covered in their refuse, with one Twice co­founder chalking the affair up to ”#startuplife.” […]

At the end of the party, Twice co­founder and CTO Calvin Young Instagrammed the aftermath, with confetti poppers and gently crushed beer cans in front of his immaculate shoes, writing, “Post party aftermath @ #dolorespark #pbr #startuplife.”

It didn’t take long for the much-loved Robot Dance Party, who has since the park’s reopening been repeatedly ejected from it, to point out the absurdity of the situation:

This makes me really sad. I got shut down by rangers, where were they when these people trashed the park?http://t.co/T3tzZnrWE1

or perhaps “Two Times” would be a better rejoinder.

Seriously. This park get trashed EVERY nice weekend and somehow it’s only news when a tech-bro does it.

I have an idea - put some huge trash cans everywhere. Maybe if theres somewhere to put the trash, people would be more likely to throw it away.

don’t be so defensive (or another oblivious tech bro); confetti in a fucking park?

Beer cans are going to be recycled.   They don’t have to go to garbage cans.   But whoever agreed and threw the confetti on a grass park  showed serious lack of judgement.

what am I missing here?   open and shut case.   SF should charge the guy and make an example of him.

Haha jealous losers. We are millionaires and you guys are still paying rent.

You can send them a message at   hello@likeittwice.com

Totally clueless act by Twice and their techie idiots, but I also see non-techie locals trashing the Mission every day.  They’re dropping fast food bags and wrappers, leaving piles of dirty clothes and broken furniture on the corner, human s–t and piss on the sidewalk.  Twice may be idiots but they shouldn’t be called-out  if these other trashers get a free pass.  Gotta be mad about both or give a free pass to both. Which is it?

Which ones? How about the ones Instagramming it to the world? A lot easier to call them out via this hear interwebz.

nah- those people trashing the park on the regular are techies too - i can tell because of their football throwing, sack tossing playing and because they wear the name of the company they work at on their chest. Replacing the name of where they went to school.

Techies are better then you.  Its not a double standard.   You need to be evicted so we can put this building to a more productive use.   Fuck you lower life idiots.  Get a job!

I wanna pee on you.

littering is the WORST, yet so many groups do it every single weekend. I am very surprised that trash cans or dumpsters were not added to the new design in a more functional way. Even if people pick up their trash at the end, usually a cup/napkin/confetti will blow away mid festivity. Its something that needs a better solution than a PR campaign. Or at least more than a PR campaign.

ALSO 250 people lost their jobs with basic severance nothing more. How is this really a “swamped with cash” situation? This company relied on a huge warehouse staff that filled orders, hardly the average “tech” job.

To the techies who love to brag about all their millions: I think you will find, when your death takes it toll, all the money you made will never buy back your soul.