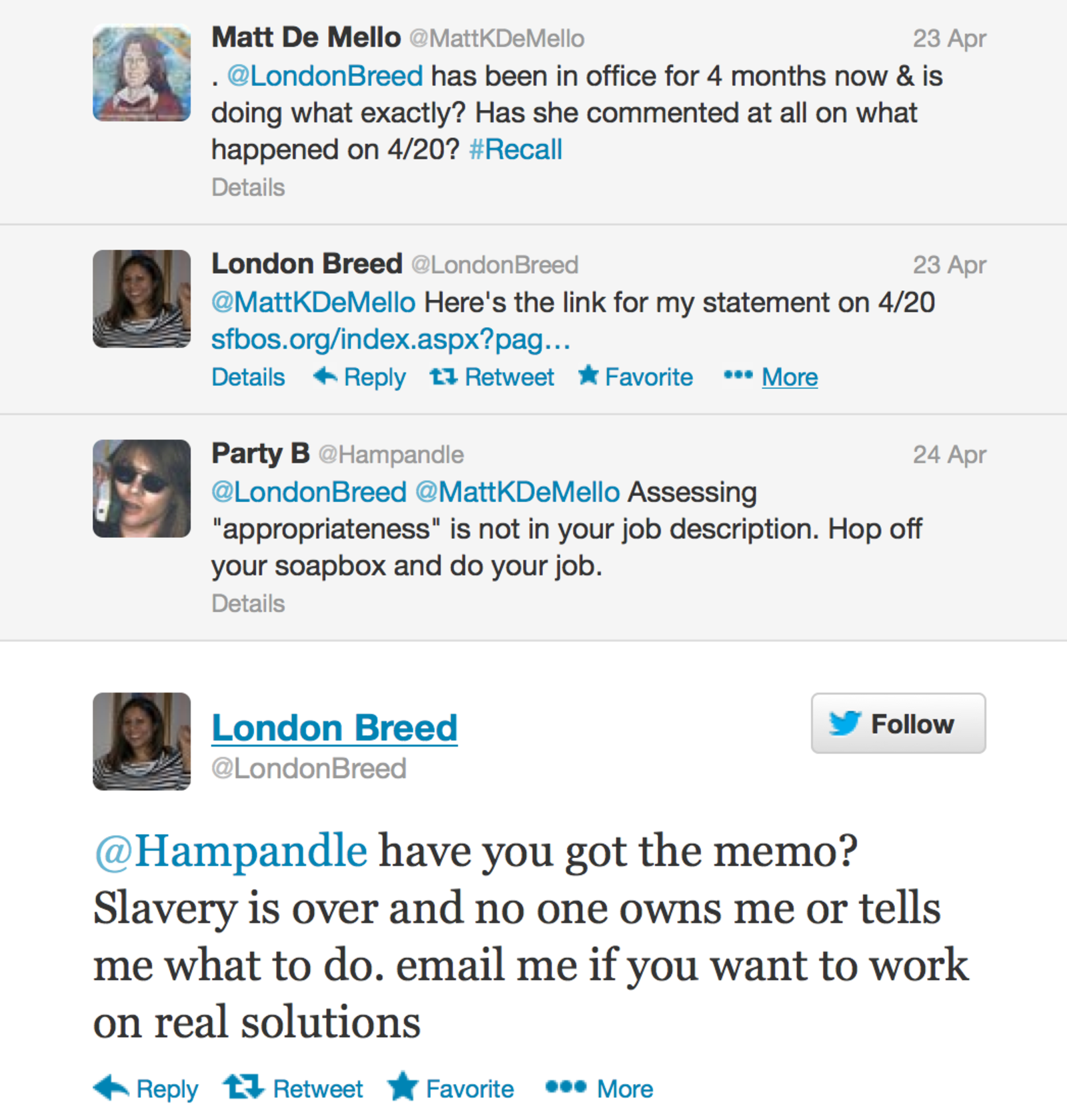 District 5 Supervisor London Breed is perhaps still most famous for her awkwardly foul-mouthed campaign rant about how the Willie Brown/Rose Pak cabal doesn't “fucking control [her].”  (In her own words, “I don’t do what no motherfucking body tells me to do.”)  Now, she's keeping up her 'independent bad bitch' shtick, chewing out her lowly constituents on Twitter, needlessly pulling out the race card, and implying her detractors and evil wannabe slave-owners.

Her recent blunders follow her “Statement on '4/20' Celebrations in Golden Gate Park,” in which she decried the “drug abuse” and “non-medical marijuana use” of the event. Reader Cynthia fills us in:

Did anyone notice London Breed's tweets on Wednesday? She was on a roll. I happened to be tweeting with her as well, until I called her out on tweeting in Budget & Finance.

Me: When @mayoredlee is to the left of a D5 supervisor, it's kind of a fucked up day. #420 #ggp @LondonBreed
LB: seems to be a common occurrence for you. Sounds like a personal problem. The news always take things out of context.
Me: You know, @LondonBreed, maybe it is “personal”. I love my district. But the real issue is your stance, not me calling you out on it.
LB: all good. It's welcomed excitement in my life.
Me: Wait! @LondonBreed Are you tweeting while in Budget & Finance Committee?

I mean, at least she didn't pull the slavery comment with me, as she did another person, but when would that ever be an appropriate response to a constituent?

Good question.  Here are some of her other best hits: 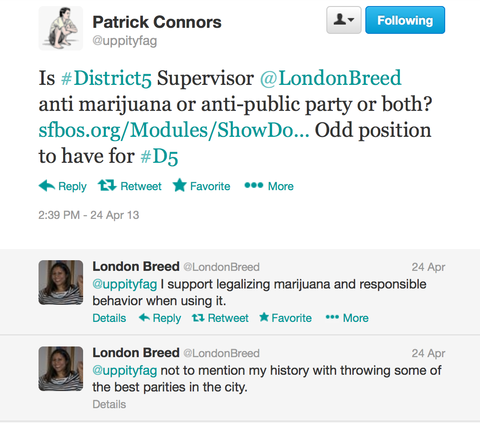 Kinda inside baseball for me. But I think its good that this stuff is pointed out.
So good blog posting……….

I guess even though the election is now long over a reminder of who financed London’s victory is in order.

But meanwhile back to the point… I would totally comment on the mayhem and potential for future mega-mayhem that is our wildly fun, bizarre and unsustainable 4/20 celebration, but before I was shot dead there I forgot everything about it.

This is a difficult challenge. Because the event is inherently illegal, no one will ever claim to be the organizers of the event. But none of the results of Saturday’s revelry were unexpected. Is it more expensive to deal with the problem up front, or clean it up afterward? Legitimate question; I don’t know the answer. I do know that it would have caused less disruption to the neighborhood if things had been dealt with up front. District supervisors are entitled to their opinions and are welcome to say things like “This really shouldn’t be happening because it’s illegal and/or immoral.” But it is their job to deal with the ‘problems’ or disruptions to the lives of their constituents, and it sounds like most of the cleanup was organized by Rec and Parks.
Good thing she isn’t in charge of District 6!

It happened last year, it happened this year, it’ll happen again next year.

London - when can your constituents expect to see a plan as to how the city will deal with 4/20 in 2014
or are we doomed to be like Halloween in the Castro where someone will have to get hurt first before anything is done ?

Please excuse me while I get this out of the way:

You couldn’t come up with a riff on ‘London Calling’?

She don’t rock my Casbah, but I ain’t about a White Riot.