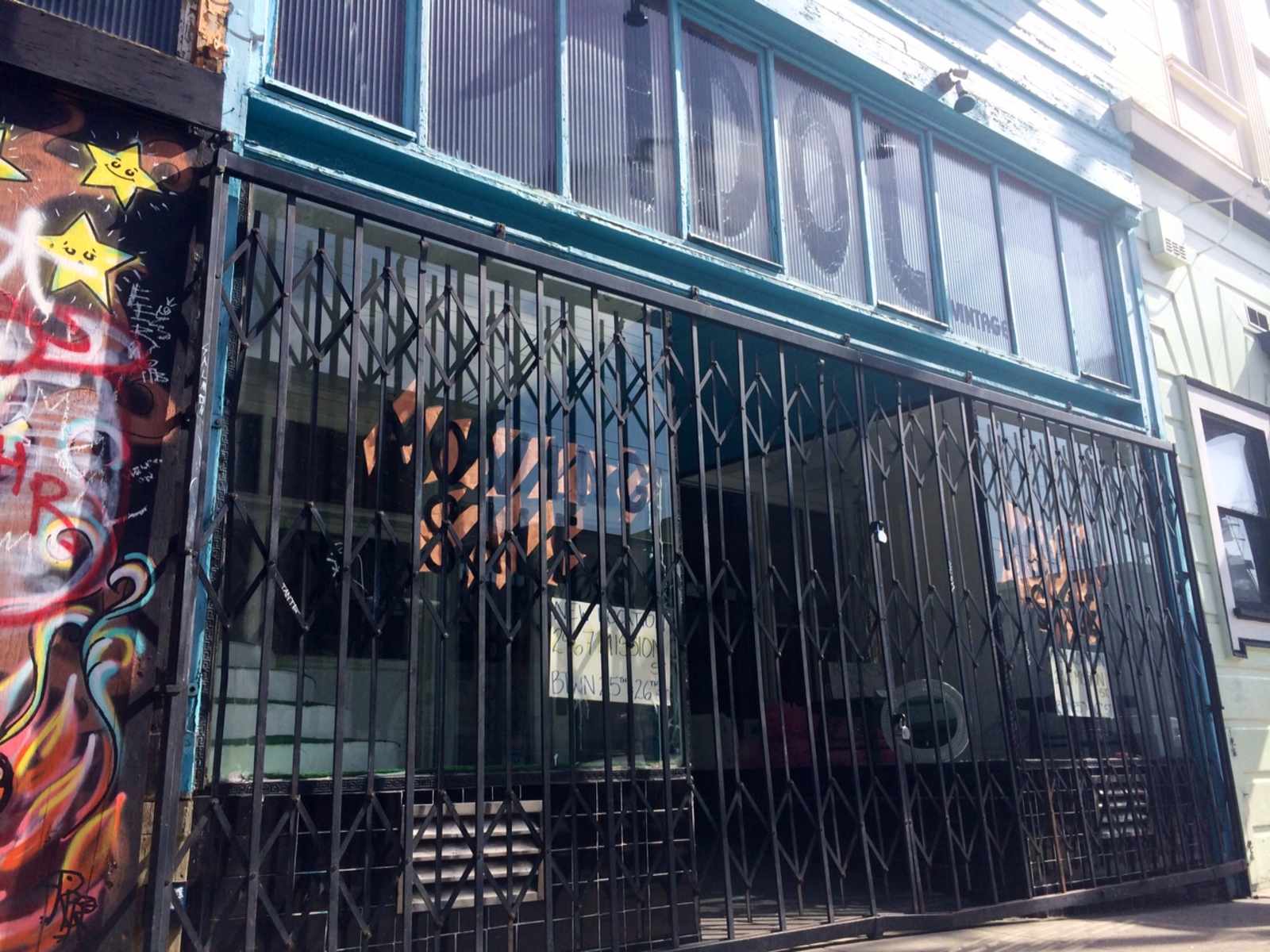 No where is this quite as obvious as 16th Street, where once vibrant storefronts sit boarded up, passively awaiting monied tenants and even trendier businesses to move in.  The latest victim in this pursuit is Idol Vintage, the used clothing haven that’s sat at 16th and Albion for 13 years.

None of this is too surprising, of course.  When we originally reported last spring that Liz Claiborne was pushing for Adobe Books’ eviction from their then-16th Street location, we mentioned “that representatives from Jack Spade allegedly went into neighboring retailer Idol Vintage ‘without warning’ and ‘literally measured the store with a tape measurer’ with future expansions in mind.”

While the proposed Jack Spade store went down in flames following extensive community backlash, it was clear that the landlord that jacked Adobe’s rent by 87.5% would hit Idol Vintage with similar increases.  And when Idol’s lease expired last year, that’s exactly what happened.

$7,500 is already high for most businesses, but especially so for one that specializes in selling vintage clothes.  However, it was made even harder to stomach by the rent increases, displacement, closures, and property sales has left Idol’s block of 16th between Valencia and Guerrero with five empty storefronts in the last year—and foot traffic severely reduced.

Andalu closed in January to make way for a forthcoming Chinese restaurant from Tacolicious, Tokyo GoGo shuttered in favor of a new upscale cocktail bar currently under construction, Adobe Books was pushed onto 24th Street by Jack Spade, an auto garage closed and sold for $8.7 (presumably) for condos, and Val 16 Market closed after their landlord allegedly raised their rent over $10k.  The result of this was that January and February were some of Idol’s slowest months in their history, despite the higher rents.

“If we were on Valencia, we wouldn’t have to move,” Dolores stressed.  “But with all the closed businesses on 16th, there’s just not enough foot traffic.”

Like many retailers before her, she’s relocating south to 25th and Mission (2967 Mission, to be exact), where rents are “half as much.”  And they’re scrambling to open before the Bay to Breakers rush, with a grand re-opening celebration scheduled for next Saturday.

As for their old location? Dolores tells us representatives from a hamburger chain was sizing up the property before Idol could finish packing.

YES, EXCELLENT POINT. Not the entirety of it. But the part that requires legislative supermajority to pass certain tax regulations, and the part that freezes prop tax for COMMERCIAL property, which made no sense in the original context of the law, which was supposed to keep little old ladies from being priced out of their homes of 80 years.

The “little old ladies” line was a ruse - Prop. 13 was designed primarily to boost the fortunes of those who held large amounts of residentail rental properties and commercial properties.

That said, there’s no way to repeal “part” of it - the equal protection clause nukes the Democratic fantasy of a “split roll” system to change the law can’t happen unless you get the Supreme Court involved, and we all know how well THAT has gone.

Look I’ve said it before and I’ll say it again. What’s the point of anti-chain-store regulations and a “merchant’s association” that seeks some kind of cultural preservation if rent increases are simply going to transform every strip of commercial property into the same bland high-end foodie/boutique business? What’s the point?

I’d rather a McDonald’s be there than another yuppie eatery. At least Mcdonalds would cater to poor people. Nothin squares-up a neighborhood as bad or as fast as monnneeeeyy.

If you’re too obese to walk an entire 2 blocks to the McDonald’s at 16th and Mission, more food isn’t the answer.

Eric’s right.  Only fat people eat at McDonald’s and fat people can’t even leave their houses.

Remember when Tokyo GoGo was THE ENEMY? The face of gentrification itself? My, how times change.

Ha, I don’t think anyone is really nostalgic about Tokyo GoGo

Isn’t the only difference between Tokyo GoGo and an “upscale cocktail bar” one serves overpriced raw fish with their over priced cocktails, and one has a fresh coat of paint instead of ten years of grime?

Yeah, and Andalu? Seriously? That place was douchebag central. Not very good at all. I am totally, entirely stoked that we’ll (someday) have GOOD Chinese dumplings near me (sorry icky Red Lantern or whatever you are, your factory-made stuff isn’t cutting it).

25th and Mission is an excellent location for more gentrification. Pet store, fizzy drinks, now vintage clothing. It’s all going according to plan!

They’re only vacant because of assholes like Jerkoff John.

So it’s not the corporate interests that fueled the displacement, but the broke activists that responded to the aggressions fault? How does that work?

“So it’s not the corporate interests that fueled the displacement, but the broke activists that responded to the aggressions fault? How does that work?”

Corporate interests fueling displacement.  Hmm.  You mean small business since formula retail is not allowed.  Activists are more in the way and often misrepresenting or even worse, not even sure what they represent except being against anything that resembles growth and progess. Just shout out against “The Man” and all will come your way.  We’ll subsidize your housing, your gorcery, your transporation and your health care so you can go on whining while inovative small business owners take risks, create jobs, pay taxes and city fees.  And let me ask you this, who did you displace living in your hipster mission apartment?  10-15 years ago there was a completely different demographic.

But you, as a hypocrite, feel it’s OK for you and yours to move in a pay a little more in rent than the families that were there for 30-40 years.

As long as Double Dutch an others keep drawing the punchy, stabby and shooty types the fun will continue.

I hate that place and their ‘clientele’. Absentee owner & a-hole bouncer and played-out bboy staples. Trick Trap all the way

Agreed.  I’ve always hated Double Dutch.  I have some friends who like it, and I’ll never understand why.

to quote Black Dynamite I say

“MAN, THIS TIME THESECRACKERS HAVE GONE TO FAR!”

One interesting fact I heard recently from a former Adobe Books employee is that Jack Spade is still paying the rent on that 16th street space since they didn’t follow through with their rental agreement.

People that keep screaming ‘nimby’ or ‘squalor’ keeps businesses from renting have no idea what going through real estate brokers and dealing with landlords is really like. And that landlords even after the bust, still talked among themselves as did the brokers, that though many rents dropped 50%, (not on valencia but on mission street and 24th) the idea was to plan for the next boom, and not get any tenant that couldn’t afford massive increases a few years down the road. Landlords for the most part will have no problem justifying letting a place sit empty, even for years, rather than rent a 5 or 10 year lease to viable working class type small business. I spent years looking post bust and had many vile experiences. Since I’m white I heard a lot of shit from white rich people too. They are the kind that just ‘assumes’ any other normal looking white person thinks like them.

anyway, lets hope that new good pizza place doesn’t get screwed by their landlords. We know their record.

To be fair and accurate, Prop 13 doesn’t “freeze” tax rates.  I am not debating if it is right or wrong for commercial properties, but it certainly isn’t frozen at the last sale price.   Indeed, it has the unintendend consequence that during bad times budgets don’t have to be slashed because the annual increases and the prices decreases seem to match.