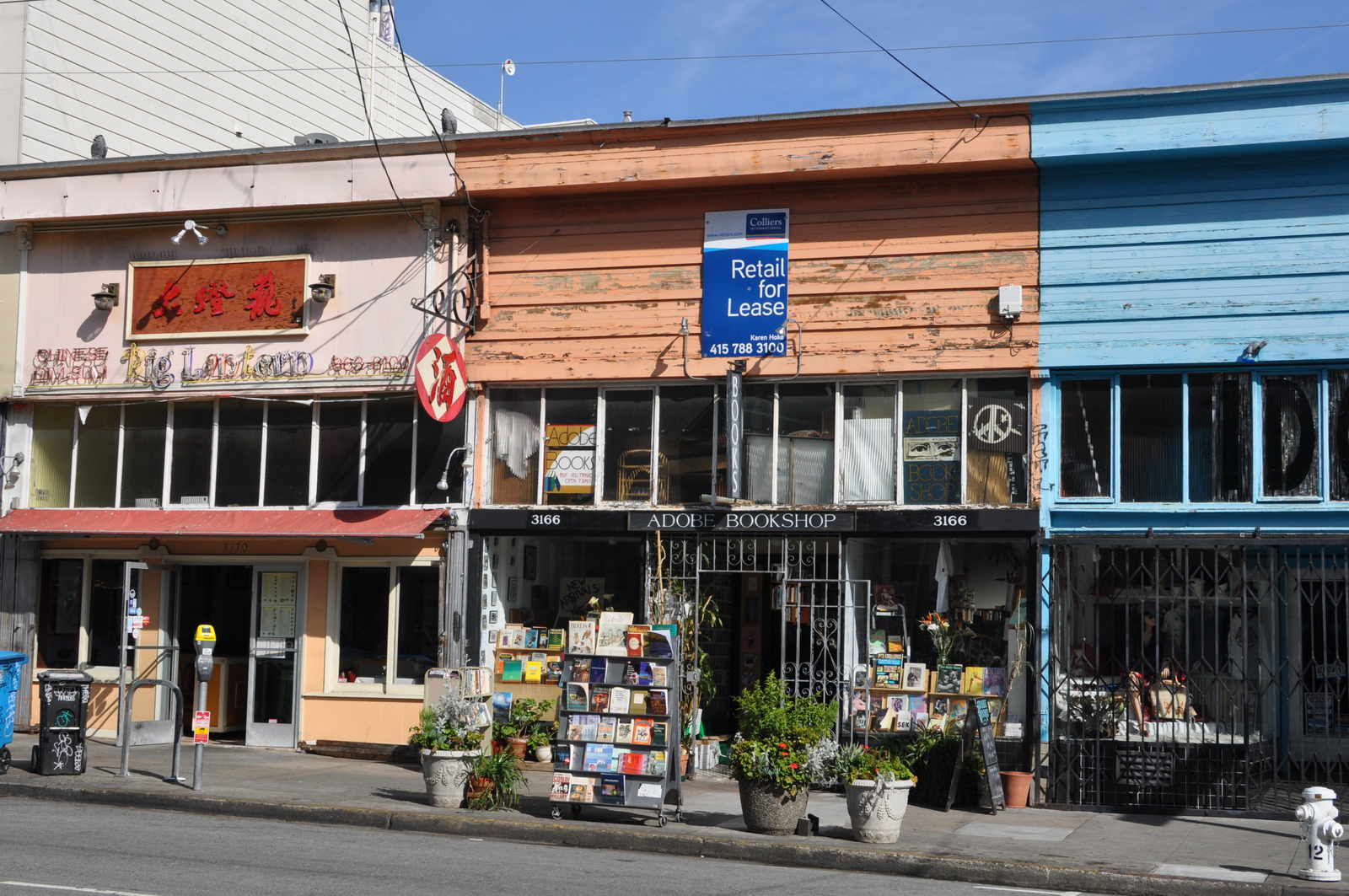 Following last week's report that Jack Spade is pushing for Adobe Books' eviction, we just learned that the 25-year-old bookshop has been served its final eviction notice.  A member of the Adobe Books Collective relayed the news, telling Uptown Almanac “the property owner of the Adobe space served [owner Andrew McKinley] an eviction notice for June 15.”

The eviction notice comes less than two weeks after Adobe Books raised $60,000 to cover a year's worth of rent increases.

The biggest unknown surrounds the future of the space.  As you may recall, Jack Spade—a subsidiary of the Liz Claiborne conglomerate—sought a Letter of Determination from the Planning Department regarding the brand's status as a formula retailer last summer.  But besides job ads and reportedly sizing up Idol Vintage next door, they've been completely silent about their plans. (To us, having your press person decline to confirm or deny you intentions is a de facto admission of ill intent.  Alas.)

It stands to reason that Jack Spade is sprinting to open a location in the Mission, hoping to avoid a damaging fight with residents the likes of 2009's protest that kept American Apparel from opening on Valencia Street.  As Jack Spade only operates 10 stores in the United States, they are one store shy of meeting the city's definition of formula retail, which is banned along the Valencia corridor.  Their proposed location at 3166 16th Street would be that store.

Jack Spade, Kate's little brother is more than ready to step out of his sister's shadow as the brand becomes a major focal point and potential growth driver for [parent company] Fifth & Pacific. The brand is now poised for broader expansion, as Fifth & Pacific's CEO William McComb said that Jack Spade 'can be a $100 million men's business with very high margins.” The company has invested heavily in the brand as it moves closer to attaining lifestyle brand status. The investment has taken the form of store expansions as the brand grew from three units to 10 stores. Those numbers are also expected to rise as retailers set its sights on domestic and international markets, notably China, according to vice president and brand director Cuan Hanl

It seems the purveyor of $495 lemon raincoats is trying to sneak their way into the Mission District before it becomes illegal to do so, skirting the intent of the city's anti-formula retail legislation.  Adobe Books just happens to be a casualty in their pursuit.

We'll update if we hear anything else.  If you have any inside knowledge of Jack Spade's plans, drop us a line at tips@uptownalmanac.com.

I don’t understand why people were so upset about American Apparel moving into an empty storefront, but Liz Claiborne kicking out a long-running bookstore has gotten zero attention.

And the story of an local, funky bookstore falling to an evil corporation is older than the 1998 romantic-comedy “You’ve Got Mail” starring Tom Hanks and Meg Ryan as two business rivals who hate each other but fall in love over the internet.

So what you’re saying is that Adobe Books owner Andrew McKinley should sign up for OK Cupid?

lol. Yeah they talk about the company’s lack of response to press queries as indicating there’s ill will behind this. But it’s just inevitable change, unfortunately.

So I finally checked out what a Jack Spade is because I had to see what that raincoat looked like. And the clothes are a bit, uh, aspirational for this neighborhood.

If they think the schlubby engineers, and sloppy neckbeards who refuse to move out of my fucking way when I’m trying to get through the hood, are going to start dressing like that then…. good luck! Dudes in this neighborhood don’t dress this nice. For better of for worse. How good do you have to look to play Modern Warfare 3 on your couch? (They don’t sell cargo shorts and flip flops do they? Cause then we’re doomed!)

Unless, they think that people (men!) will come from the Marina/Hayes Valley/Upper Fillmore/ San Lamorinda to shop there and drop $495 for a raincoat across the street from SROs then….good luck!

In the next phase, software engineers will be nostalgic for the days before the soulless, well dressed people started pushing them out of THEIR neighborhood.

Will Adobe stay in the Mission? Or will they move to Oakland where most of their community now lives?

I’m sure that Adobe will soon be Ghostriding the Whip……

60000 should be enough to start a place in the bay view though.

Okay so why in the hell don’t we rise up like we did with Dov Charney and tell Jack Spade we don’t want them here. Period. Adobe notwithstanding. Who the hell is in charge of this revolt. The hell?! Do I have to do everything around here myself?!

Here are two email links so you can contact Jack Spade and let them know how you feel about having Adobe Books displaced. customerservice@jackspade.com
This is the only contact listed on their website.
They are owned by Fifth and Pacific Corporation. Email is not listed for them but you can register a complaint here:
Corporate Phone Number: 1-212-354-4900
or at their toll free customer service number at 1-866-549-7467
Pass it on.

Their CEO is William L McComb. His email address is WMcComb@fnpc.com

I strongly encourage sending polite letters explaining why you won’t be shopping at their SF store.

Hey People, we can still do a lot to stop Jack Spade from moving in. We can call a public hearing with the city and demand to be heard. I spoke with SF Planning Dpt, to someone who used to buy kegs for adobe parties back in the day, and he said that based on the rate of growth of Jack Spade (this being their 11th store, for example) can be used against them and show that they don’t belong in the mission. Help preserve authentic culture in San Francisco and say ‘hell no’ to cheesey rat bastards trying to exploit people who so desperately want to look cool….

Or you could always just not shop there. No sales, no reason to keep a store open, right?

Anyway, I’m guessing most people that like Jack Spade would prefer shopping for it at Bloomingdales versus hauling their ass down to Valencia.