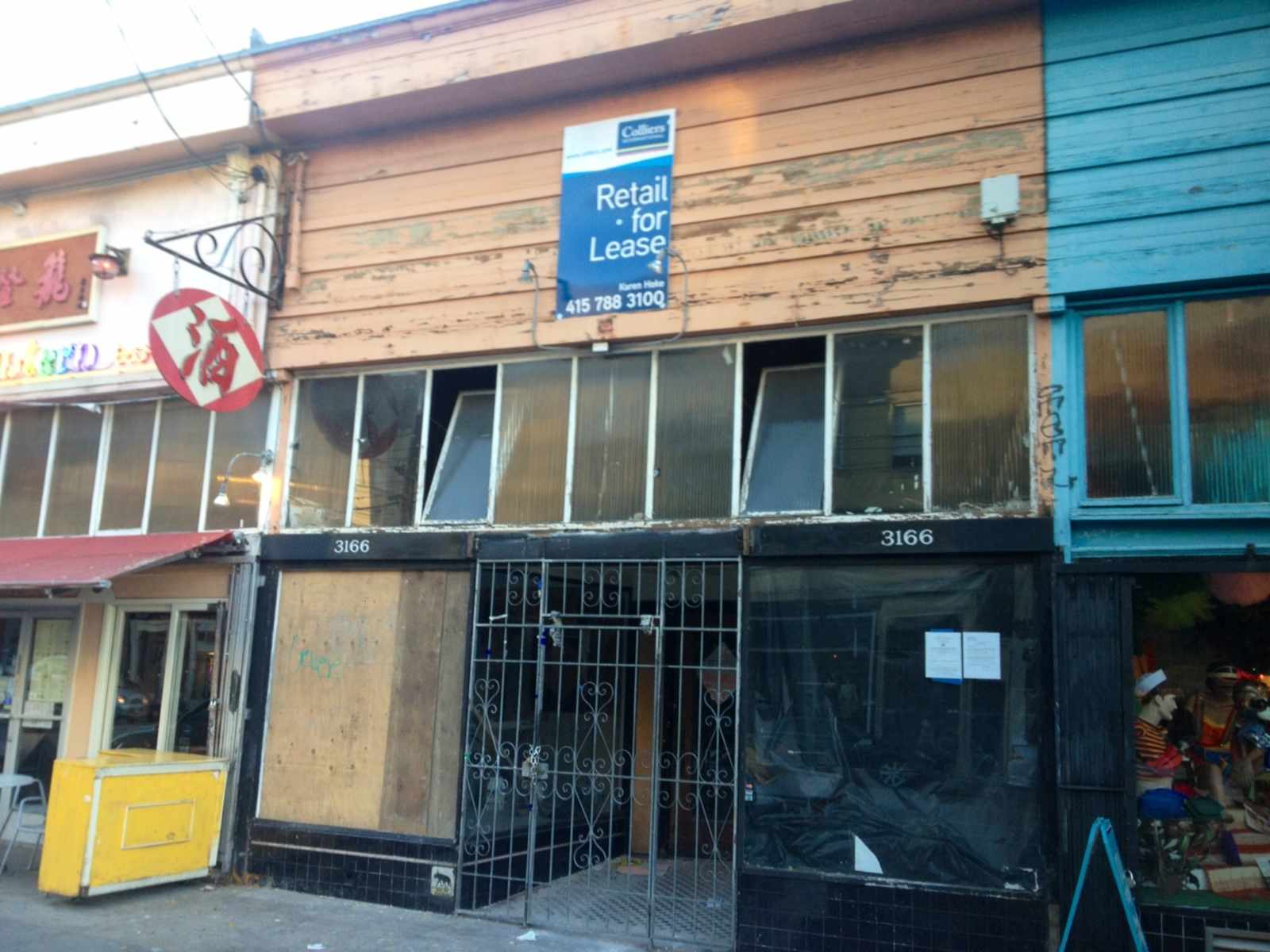 It was just two weeks ago that Liz Claiborne Holdings began gutting Adobe Books' former home at 3166 16th Street, creating a sense of inevitability around Jack Spade's moving into the neighborhood.  The odds seemed stacked against the Valencia Corridor Merchants Association, who found themselves petitioning to sway them against opening the store.  However, VCMA's luck has seemed to shift, and now Liz Claiborne has suspended the build out of their latest Jack Spade location.

VCMA's Jefferson McCarley sent us this update on their campaign (highlights in bold):

For months the VCMA has been trying to reach out to Jack Spade. Our invitations to talk have been met with radio silence.

The only exception is that a PR rep wrote to me saying, “The in-house team at Jack Spade is aware that you are interested in speaking with them, and will be in touch soon.”  That was May 15th.

This is interesting considering what they wrote in their application for non-formula retail status: “When Jack Spade opens a new store it is important to us that we become a part of the neighborhood's fabric… Jack Spade stores operate with a focus on … community.”

So because they refused to come to the table, we began the process of blocking their arrival through a more formal process.

5th and Pacific (formerly known as Liz Claiborne), did $1.5 billion in sales last year. And while in their application they distance the sub-brand from the parent company, in the 5&P annual report, the company doesn't even break Jack Spade down into its own category—they are lumped in with the Kate Spade “segment.”

There are three “Spade” brands: Kate, Jack and Kate Spade Saturday, with a total of 91 stores in the US.

The VCMA has filed an appeal, which stopped construction yesterday. We are working on a Jurisdiction Request to the Board of Appeals requesting that they be classified as formula retail.

There will be a public hearing.

None of us want to be doing this. We are usually working 50 hours a week on our own businesses.  Now we have this battle to fight on top of trying to run a small business in San Francisco. We're meeting regularly, after our shops close, because we care about our neighborhood.

In a letter dated September 6, 2012, the Planning Department sent a letter to neighborhood organizations which included instructions on how to appeal the Department's decision [on their ruling on Spade's formula retail status]. If we had received letter then, we would have appealed last year.

Who did get the letter? The Mission Merchants Association. It was addressed “attn: Phil Lessor,” who is a paid consultant of Jack Spade.

We don't have the resources of 5&P. In fact, we're paying for everything out of our own pockets. We don't have the lawyers and professionals that they have, but we have community support. That's what keeps us going.

For the people that ask, “What's so wrong with Jack Spade? How different will that store be than other stores already in the Mission?” Maybe not a lot. It might have the same look and feel as some other (independent) high-end clothing stores that are here in the corridor.

If we thought that Jack Spade would be the one and only formula retail store to open up in the corridor, I'm pretty sure we wouldn't be working so hard on this. But we think it's the first—not the last. Once JS opens up in this wildlife preserve of small independent local businesses, it sends a powerful message to the rest of Corporate America.

We think residents and visitors alike will prefer West of Pecos, Ritual, Deema's and Glam-a-Rama to Chili's, Starbucks, Banana Republic, and Super Cuts.

Representatives for Jack Spade still refuses to comment on their plans to Uptown Almanac, however, they have pulled all their employment ads for the location, suggesting they preparing to scrap their planned expansion.

Yay, we’ve succeeded in creating another vacant storefront! Everyone pat yourself on the back!

“We”? Are you taking responsibility for kicking out Adobe Books?

Yes, I totally did that.

Oh no, we put people before profits.

“Yay, we’ve succeeded in creating another vacant storefront! Everyone pat yourself on the back!”

What, in god’s name, are you talking about. What vacant storefronts? The Valencia corridor must be one of the most thriving urban merchant corridors in the entire United States of America.

I remember when clueless SF Chronicle columnists decried the stopping of American Apparel’s opening on Valencia, citing empty storefronts and a doomed economy for the Mission. A study at the time ended up showing that the Valencia corridor actually had fewer vacant storefronts than almost any other corridor in the city. And christ, look what’s happened since then since American Apparel was kicked out. Anyone who thinks chain stores are necessary to keep a commerical corridor thriving is ignoring the utterly glaring evidence that is directly in front of them on Valencia Street.

This was a long way of saying that your comment betrays a profound ignorance of the obvious reality, Doctor Memory. Sorry.

Because Residential Property values in SF need a boast?

Depends if you own property or are hoping to buy.

I find it hard to believe they’re going to give up that easily.

They’ll just open on Chestnut instead. Basically the same demographic at this point.

Yes, we prefer businesses like West of Pecos and thank them for saving our neighborhood.

+ 1 on that West of Pecos slam

you know what’s going to happen? companies like this are going to wise up and start opening on Mission street instead, and nobody will complain. and within five years mission will be chestnut.

Mission Street used to be known by the name, “the Miracle Mile”

Until the BART construction killed it for a few years. It never recovered. Maybe it’s time.

betting future economic prosperity on expanding chain retail is a dicey proposition. Burlingame basically turned its main downtown street into a mall with lots and lots of formula retail and new additions to such. then the recession hit and BAM! empty storefronts galore and lost tax revenue.

a mixed batch of local and non local is better than betting the farm on shitty little boutiques selling crap no one really needs (i.e artisan costume jewelry), be it local or national.

Yay! Glad that the good guys are winning, at least for now. Hopefully they’ll be able to block this chainstore bullshit altogether, though.

The store will open as Joaquin Pala, and the “Heeeepsters” will be none the wiser.

As someone who has lived at 16th and Valencia for nine years, I welcome this new business with open arms. This building and this space need significant money invested given their age and physical deterioration. A tenant is willing to put in this significant investment of money to improve a rundown building, create many more jobs than were ever created by the bookstore, provide a business at which people want to shop (versus a bookstore at which few shopped), and in the place of a vacant rundown storefront we will have a thriving tax paying people employing business. Again, as a long time resident of this immediate area, I say Welcome to the neighborhood, Jack Spade!

As someone who has lived near 16th and Valencia much longer than Chris, let me say that Chris doesn’t have a clue how the world works. No one, repeat, NO ONE in this neighborhood wants or needs Jack Spade’s $900 duffel bags, not even Chris.

The few jobs it will create will mean nothing as the gentrification caused by this corporate retailer willing to pay $12,000 per month will price out of the neighborhood the very employees who get those jobs along with the rest of us.

Yes, some tourists and visitors from Pac Heights might actually want to shop there, which is why this store should be located on Union Square or Union Street.

For the love of god, don’t let this billion dollar company spark kick the gentrification of the Mission into even higher gear. No Jack Spade in the Mission.

I really wish I could comment on this idiocy.

Yay.  Get rid of jack spade.  Because I want to shop at locally owned, self important, overpriced clothing stores (who are just buying their clothes from the same stupid factory as Jack Spade)….OR they can make it locally…maybe in the back of their shop…and help the local economy….if you feel like paying $150 for a locally made (ridiculous) tshirt.