Another Dive Bar Down 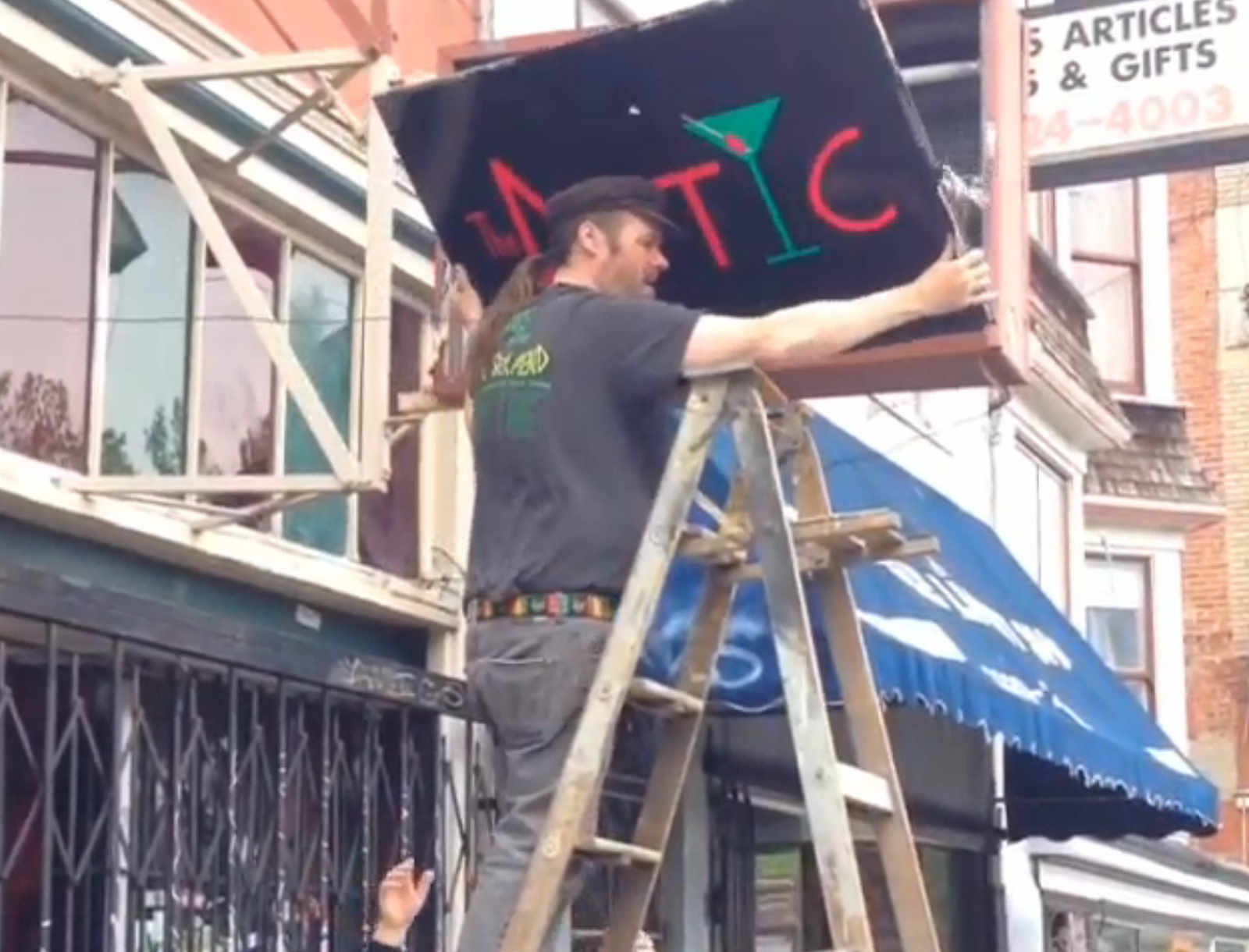 Well, it finally happened.  After years of rumors, the beloved smelly dive closed up their doors without notice and took down their sign Monday.  The Bold Italic reports:

Attic regular Andy Pastalaniec heard the news of the bar’s shuttering yesterday during his lunch break. He made it over in time to find Howell and bartender Keith packing up and taking down the bar. “I documented the unceremonious removal of the sign out front. After work I stopped by and hung out with a handful of regulars and Keith, and we had a minor send-off. I had to leave as Keith was about to kick everyone out and close up for good.”

By Monday evening, Pastalaniec told me, “the sign was gone, the gate was locked, and the Attic, a truly unique place that played a huge part in my life in San Francisco, was gone.”

As we reported in November, the bar was facing serious structural issues, and the landlord refused to invest in renovations or give the bar a new lease.  As a commenter told us then:

I know a couple of the bartenders. They confirmed [the closure]. I like The Attic but the building srsly needs to be demolished. Even the staff hate it, it’s falling apart. Bummed to lose a bar that plays Sharknado but the place ALWAYS smells like the toilet is backed up. Because it is.

So like many older businesses in the neighborhood, without any long-term certainty and a landlord holding out for a big payday, The Attic’s owner decided to pack it up.

And now with The Attic closed, the owner is now moving onto Gashead Tavern, a significantly more upscale cocktail bar and “British pub-style” restaurant on Mission Street.

You can watch the bar’s final moments below:

Miserable. I adored that little hellhole.

I didn’t go often, and I understand things are always in flux… but I still can’t be at least a little discouraged.

Well at least we’ll now have yet another place to spend 14$ on a fartisinal drink. Go Mission.

Huh? You don’t make any sense.

Eh, to be honest, the Attic was never really that crowded.  I mean even going back many years.

Never that crowded? Seriously? Did you ever used to go there on the busiest DJ nights years ago? When I’d DJ there I’d need a five minute song just to go outside, it took so long to get through the people!

Gonna miss it.  Deejayed there on Wednesday nights for a couple of years.

Hm, guess I don’t specifically remember that.  Seemed like whenever I went I never noticed a large crowd, that said I’m sure it had its proponents.  Pops was my Attic, and Phone Booth is my new Pops.

Phone Booth is my new Attic. It’s true. It used to get VERY crowded on weekends when there were DJ’s. Without DJs it was mellow, but there were still  quite a lot of packed nights even after that.

Yep, we had 5 glorious years of raging Indie Slash parties there until the asshole neighbor forced them to cut all the DJs. Fingers crossed that Amnesia makes it…

Benders, Clooney’s, and Phone Booth will close within two years.

I know you’re trolling but I know for a fact the owner of Phone Booth owns the entire building. He isn’t closing the Booth unless HE wants too, glassholes be damned.

I didn’t realize that, great news.  As long as he enjoys running the bar it should remain the bar that it is, I guess.

This reminds me of DC, where the owner of bar Little Miss Whiskeys on H street NE, which is their hip area (though now getting yuppified as all such areas are…Portland *cough*), outright owns the building and bar in it farther east called Jimmy Valentines Lonely Hearts Club.  Now Jimmy V’s is a place that can’t exist in San Francisco, its far enough out that almost no one goes to it, being on Bladensburg road and in a bad part of town (near Trinidad), and exists mainly for the few stragglers that saddle up to it.  Now once you get inside you are likely to see a guy DJing random or strange music to sometimes literally no one, other times a packed house, you can also probably take a turn DJing if you ask nicely.  Furthermore, the owner of the building and bar lives above the bar and frequently walks around in a robe with a large dog, there is a tiny staircase in the back that is outside where people go to do drugs and smoke.

Definitely a unique place, not that DC in general is cooler than San Francisco, far from it, but places like that bar can’t really exist without a barthat has an owner of the building its housed in.  Its just a personal weird space for the guy, similar in look and drinks to Whiskey, but meant for him.

I think the best thing that a rich tech guy could do, that’s interested in keeping San Francisco weird, is to purchase 5-10 properties in the Mission, Lower Haight, Divis, and give them over to a trust of his creation.  The trust would be part of a non-profit and each building would have a dedicated function.  For instance, one would perpetually be a dive bar, regardless of the area around it, and would serve cheap drinks.  Another would be a small music venue, maybe some weird restaurant where any chef of a certain caliber (determind by the board of this non-profit) could come and cook, with the cost being artifically low as its a non-profit.  I figure you would need to be willing to part with probably 30 million to accomplish this, and it would take a special kind of person.  Like lets say the guy who sold Instagram loved the weirdness of San Francisco, 30 million out of his billions is nothing, and would be a great investment in the city and would bring pleasure far greater than most other things that money would buy.

non-profits and trusts freak me out because usually the people with the right kind of energy and free time to end up on a “board” that would decide things like this aren’t the kind of people I want making decisions about my local city’s culture, however, in general I totally agree with your sentiment that, at this point, as Ralph Nader says “only the super rich can save us.” Some rich techie that’s cool needs to step in and do something cool. Not holding my breath.

Well, you could appoint some very strange local characters, they could even be voted in by the surrounding public or some other complex scheme.  There’s really any possibility.  I know this will never happen, but I somtimes wonder why.

Until someone comes along and offers him $500M for the building, which will be torn down and made into google cubbies for all the Midwestern post-grads who don’t know and don’t care about the city, they’re just here because they’re getting $80K a year with no expenses.

No it would be placed in an irrevocable trust and given to a non-profit, the original buyer would have no authority over it

Clooney’s is also family owned and they seem pretty happy with it.

I just moved out of the apartment directly above Clooney’s last week (stay tuned if you want to move in!), and, yeah, I can’t imagine a reason why Clooney’s would move out.  That building has been a saloon since 1888, and the liquor license goes with the owner (if he moves out, it can’t be a bar because of the school across the street).  If Clooney’s does ever close, can you imagine the cermonial burial we could give that place?!?!

Any news of what is going to replace it? Or to whom the owner wants to sell it to?

At this point, any eatery for the rest of us – non-street-urchin types – gets my vote.

Wafting in 80’s popular music is a huge thumbs up.

Whoever you are sir, the future owner of the opportune spot, please disallow

a.) The menagerie of man-hating lesbian women that inhabit Rosamunde, just around the corner

b.)  Also, I do not know what her scene is but please do not let this person idle anywhere near the premises. 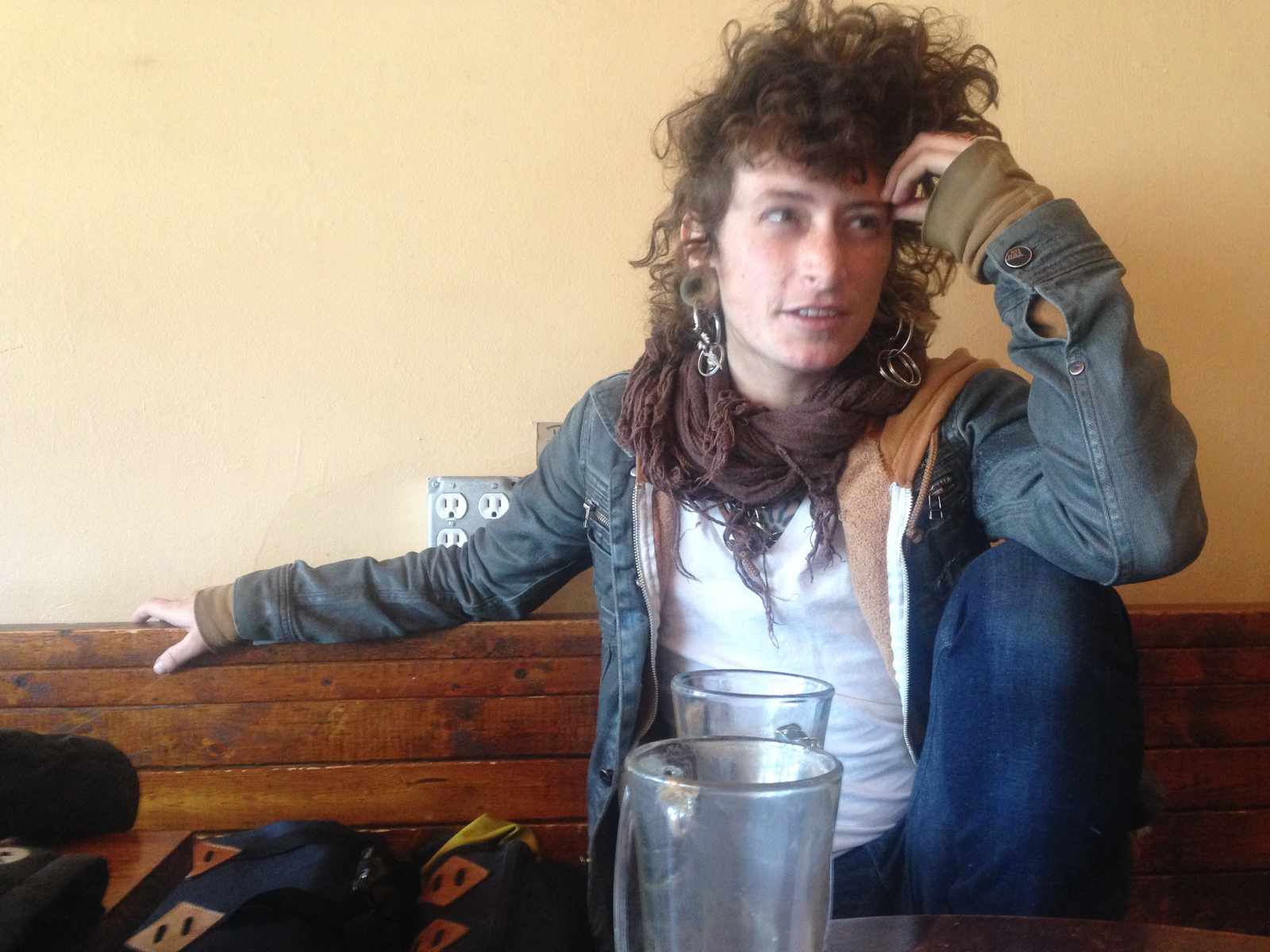 Who is that guy?

She looks like she could stop a tech bus from getting to work.

your time will come fucker.

that bar went down hill once it started to smell of vomit ALL THE TIME.

good bye and see you all in new york.

Well it only started smelling bad after the owner decided he would shut it down as soon as he found and prepped a new place to take his liquor license to. There were some keg line issues/leaks that he never bothered or cared to fix.  But he’d still complain about the lack of business! HELLLLOOO ROOOGEERRR?!

Bummer.  The Attic was one of my favorites.