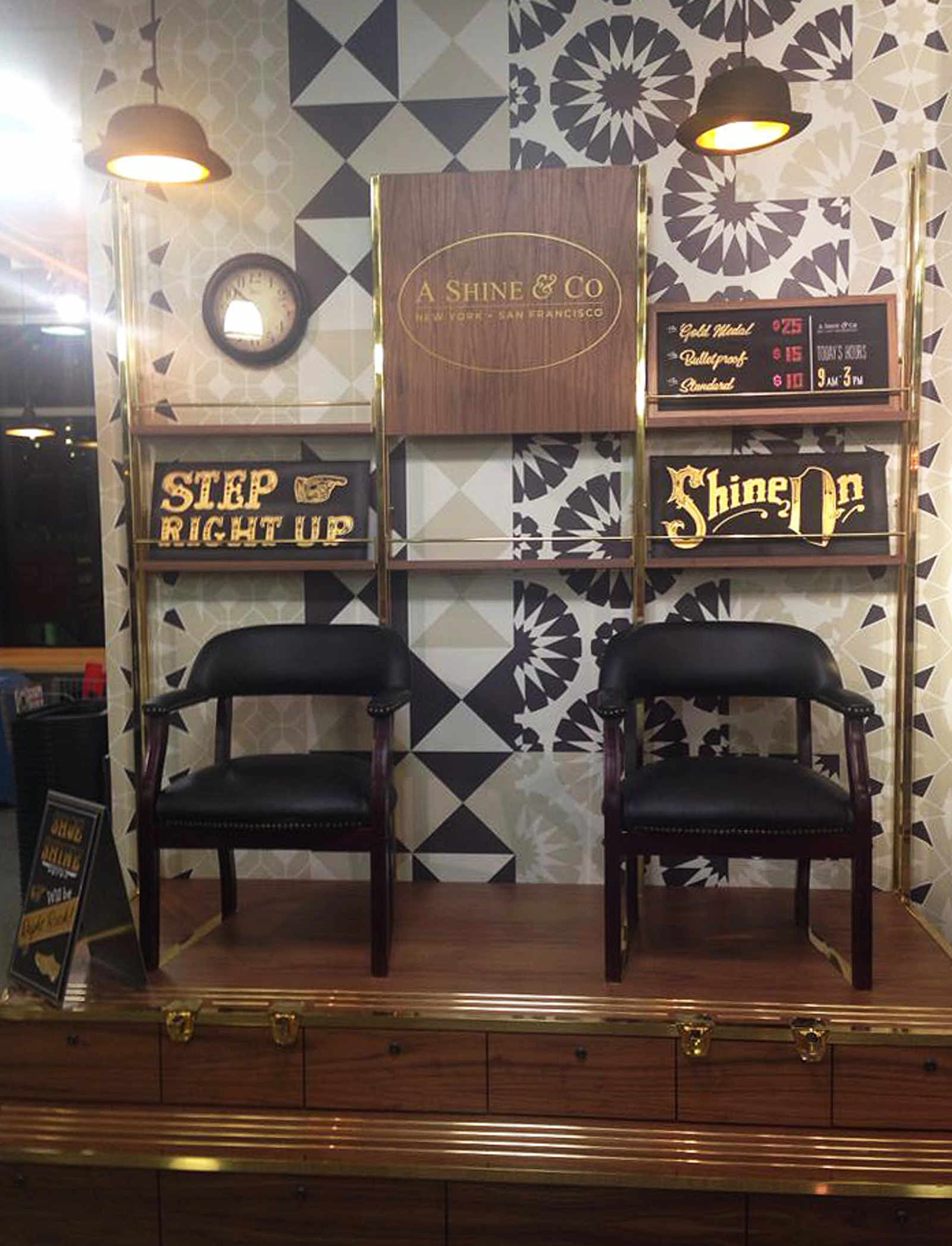 It's been a big week for new Mission-area supermarkets, first with the debut of Local Mission Market at 22nd and Harrison and now the grand opening of Whole Foods at Dolores and Market.  But whereas Local Mission Market the glorified Terminal 2 gift shop fails at providing any semblance of selection, Whole Foods has everything a preposterous person could possibly want.

Perched atop what appears to be a coffin for a very wide man is Whole Foods Presents: A Shine & Co's Steampunk Shoeshining Station.  For $10, a grossly underemployed gentleman will give you the standard shoeshine beneath light fixtures made from reclaimed hats.  And for the discriminating tech noblemen amongst us, there's the $25 “Gold Medal” shoeshine (the value-add of the gold package is unclear, other than that they'll probably polish your gold bricks for you).

“But what if I accidentally forgot my fedora at home?” you're probably asking yourself right now.  Well lucky for you, old sport, Whole Foods' new “sundries” section has a vast selection of fedoras in every fedora style, and it is conveniently placed beside the flagship shoeshinery: 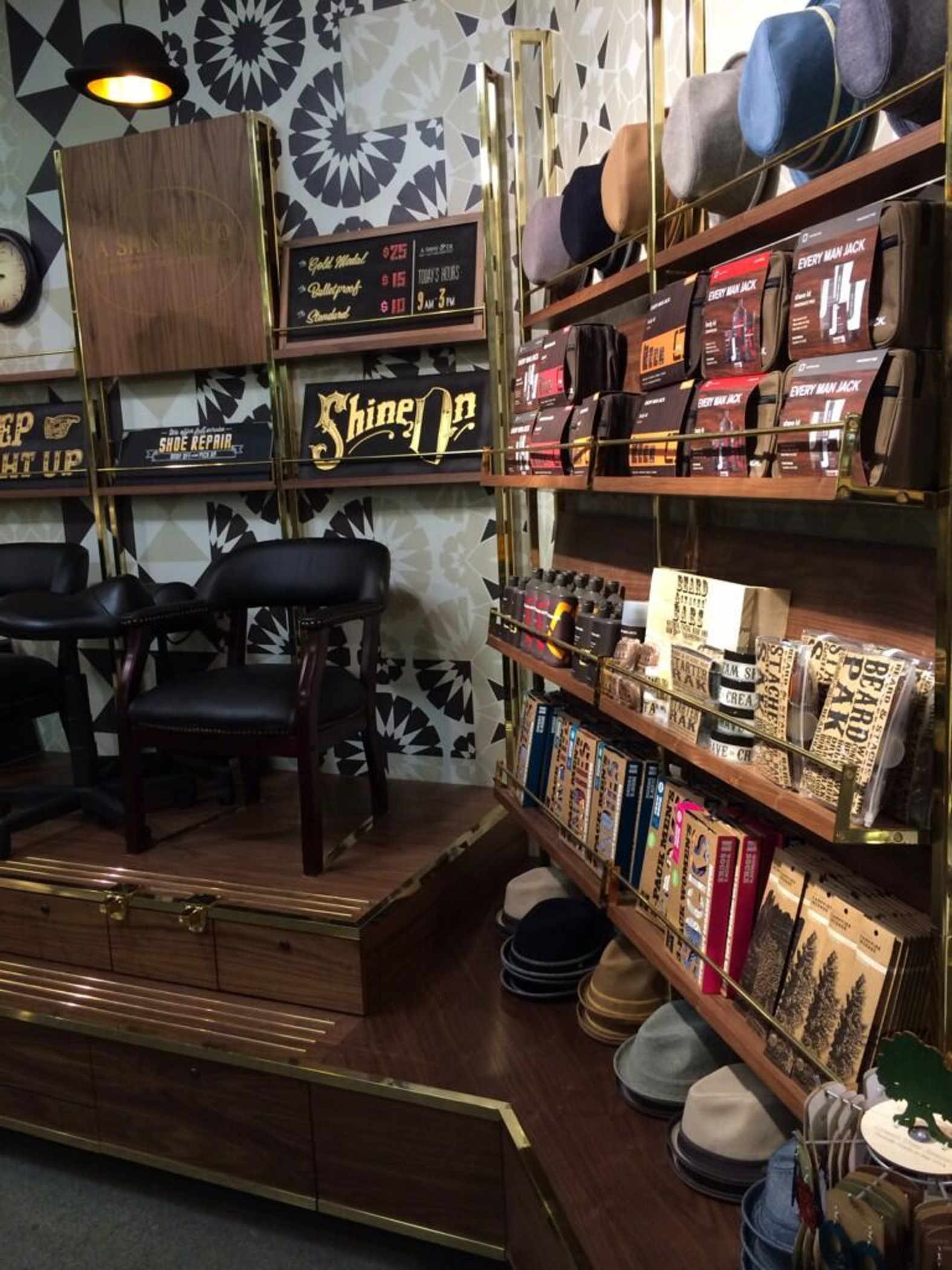 The SF Business Times touches upon some of the new Whole Foods' more desirable features:

Like the brand's other neighborhood stores before it, the store is tailored to serve the city’s Mission Dolores and Castro neighborhoods with features that include a drink bar, an oyster shucking pop-up and a shoeshine station.

“These things are obviously not food-related, but our focus is on community and giving the community different reasons to come in and congregate,” said Rob Twyman, who was hired last year to oversee the company’s expansion in the region.

Shine on, you crazy skrillionaires.

I find a hard time believing this is real, unfortunately it is.

On Wednesday you can bring in a homeless person to the meat department and they will toss him in the grinder for artisan meatloaf fixins.

Gotta keep it locovore, yo.

Wouldn’t want your Instacart shopper to show up with matte shoes and a bent-up fedora, would you?

They would have to fumigate the whole store if one of them walks in.

FYI those hats appear to be trilbies, not fedoras.

Being able to tell a nerd hat from a hipster hat is an important life skill FYI.

Why does having shined shoes make you an asshole?

It doesn’t on its own, but the whole package, wrapped in Whole Foods’ “for the community” speak, makes the entire thing suspect as all hell.

“Suspect?” How is a shoe-shine station and a few lame hats any cornier than the many rehashed bars pushing $14 cocktails served up by dudes with handlebar mustaches or paying $9 for toast and coffee while one plays on their shiny new MacBook?

One is its up to them if they want to spend their money that way„ the other is taking it to a level of repeating cherished icons used in earlier Hollywood movies.

This town needs an enema!!

Isn’t it an oyster shucking pry-open, rather than pop-up? Maybe I’ve been doing it wrong all these years.

Now I can finally get my Beard Pak locally!

Rumour has it that they’ve kitted out two little “colored” boys in dirty, tattered Marc Jacobs designed clothes to shine shoes and give the setup the proper old time vibe. They get $1 for each pair of shoes they shine and Whole Paycheck pockets the remainder. When they aren’t shining shoes, they’ll be cakewalking for coins. Welcome to the new and improved San Francisco.

…except that that article (which is behind a paywall anyway–no thanks) ought to indicate that WF stopped carrying Chinese frozen vegetables in 2010.

How is that an “Except”? The question was: Have they stopped. The link that Scum provided would seem to indicate that the answer to that is: Yes, they have stopped.

Sure; why would WF lie……? Truth in advertising is the bulwark of commerce.

Speaking of holes, from that above linked Biz Times article:

“There are still opportunities and holes where we’re not serving folks,” Twyman said. “Our plan is to fill up the rim and then the center of the donut with San Francisco stores.”

These are your customers.

But do they have $9 fartisinal yogurt?

A FUCK TON OF IT! Seriously, 2 big ass fridge sections that span 8 feet of yogurt.

We get exactly what we deserve.

I’m starting to wonder if the people who hang out at the Whole Foods cafe-lounges are paid actors. “Customer facade coordinators” or the like–part of the marketing budget for some set period. I mean, what self-respecting, young urbanite would be caught dead in a fucking Whole Foods lounge, for g*d’s sake? It blows my mind.

Given that the cosplayers at Comicon are mostly paid actors, I would not be surprised by this at all. Get a couple out-of-work community-theater veterans and a few strippers on their day off, have them do some improv work where they pretend to be a dotcom startup, and bam, Instant Interesting Community.

Holy shit, I should patent this idea! I could have, like, a whole stable of these people and rent them out!

Is that the odor of viral marketing?

this town is over

The soon to be bum tables on Dolores are a nice touch.

if only the people who made fun of fedoras knew what they actually were … none pictured.

Wait did anyone notice that the lights in the top photo are supposed to be fedoras as well? Shout out Whole Foods ushering in a brave new era where everything’s a fedora.