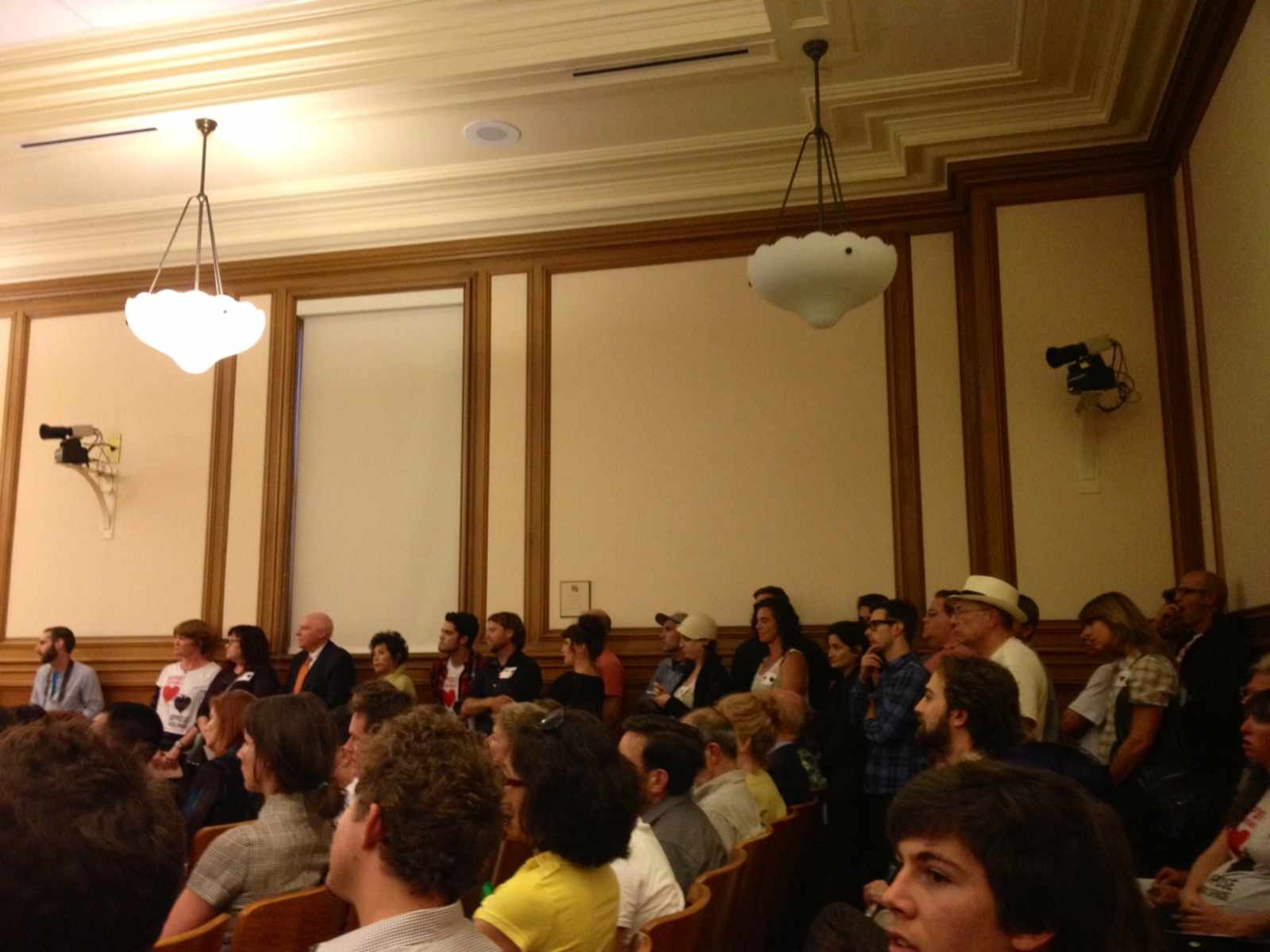 Wanting to capitalize on the recent influx of immaculate artisans on Valencia, Jack Spade has been pushing hard to move into the neighborhood—from getting a local bookstore kicked out of their 25-year-old home through rent increases, to aggressively demanding local businesses support their efforts, to even—as Zoning administrator Scott Sanchez told the Board of Appeals last week—misleading Sanchez in making his formula retail letter of determination, which allowed Jack Spade to initially move forward with their 16th Street expansion under false pretenses.

Given the situation, the Valencia Corridor Merchants Association was successfully able to get Jack Spade's construction permit suspended early last month.  But last night, the Board of Appeals fell one vote short of permanently overturning their building permit, allowing Jack Spade to resume construction.

Jack Spade co-leader Melissa Xides flew all the way in from New York to attend the meeting and praise Jack Spade as a community company and small business—distinguishing it from the billion-dollar enterprise which it is a subsidiary of. As quoted by Mission Local, she praised the neighborhood's gentrification and her business:

Somewhat contradictorily, Jack Spade's supporter's main arguments is that 16th Street is a rotten shithole that only a multinational business can fix—Bell Jar's Sasha Wingate complained about graffiti and feces outside her shop; skateboard badass-cum-fashion designer Benny Gold spoke about his concern for his young daughter's safety on the block.

But the real gem came during last week's Board of Appeals meeting, when pro-Jack Spade neighbor came up to the Board and began showing pictures of graffiti along 16th Street. At one point, she highlighted a sticker on a parking meter reading “BOOKS BOOKS BOOKS” and stated that we needed to clean up the neighborhood, and Jack Spade would make it happen. How ironic, the very person who wants to remove a “BOOKS BOOKS BOOKS” sticker sided with the retailer who removed Adobe Books Books Books.

VCMA members admit that their only course of action left is to put pressure on Jack Spade's CEO and management to back out. But Jack Spade's employment page is filling up with positions for their future 16th Street store, those prospects seem dim.

Boyle Heights is starting to go through what the Mission has been going through for at least 10-20 years, but the response is different…they emphasize “gente-frication” (i.e. people from the area especially young people, sticking around and pre-emptively striking with locally owned businesses and such). It’s definitely different than SF where everyone runs to the City to solved their problems for them.

This is great news.

So sad, Jack Spade manipulated everything to get Adobe out of their longtime space. Even while Adobe was trying to find a way to stay and fundraise and save the store at the good ol 16 Street location, Jack Spade’s hired goons were already making moves on the space (that would be Janet Crane of planning and architecture firm Freebairn, Smith & Crane who represented Jack Spade and got the original letter of determination). This is one of the problems with formula retail/big corporate, they bully the locals.

I’m indifferent, but jesus, I can’t believe these words were uttered. Actually, I can, but the tonedeafness is astonishing: “We fell in love with the food scene and gentrification that’s happening there.”

I thought the same thing. Subtext: “We knew there were people dropping loads of cash here, and we wanted in”.

Bummer. The Generification of San Francisco proceeds unhindered, I guess.

They’re coming after you next. LOL.

>11 Clones of Me? Sounds awesome! I can’t wait until the Deth Veggie franchise fees start rolling in!

I wonder if their windows will be brick proof.

“flew all the way in from New York to praise Jack Spade as a community company.” Unbelievable. And nobody noted the irony?

oh, believe me. almost everyone in the room noted the irony.

but the entire matter is so ironic that it gets hard to stay on top of all the gleaming nuggets of ironic gold.

i dont get why everyone has (or had) a hard on for Adobe books. That place was horrible. There would always be like 6 or 7 methodone’d out old guys passed out in the middle - all day. Books were just put wherever with no order or no attempt to actually try and make people want to come in or buy anything.

It feels like a giant slippery slope argument, that if we let in Spade, more people will get the boot to make room for more big wigs. I get that jack spade and corporate shops are evil and that we’d rather have local biz’s than corporations, but if your gonna be as half-ass as adobe was, you have it coming.

In our MINDS we saw Adobe as you describe, but sadly, the reality was as I described.

Sorry, you’re still wrong about that.

Naaah, professional comments troll, it sucked. Not that Jack Spade is gonna be better, believe me I am not in favor of this, it’s a railroad job for sure. But be real, Adobe Books was a disorganized mess and nobody I ever dealt with there had the slightest inclination to help me.

As above, you’re wrong about that. I always found the staff incredibly helpful, and knowledgeable about what they had (and able to make good recommendations, etc). Essentially, it was pretty much everything I look for in a good used book store. Good books. Good staff. Good prices. *shrug*

Agreed. Adobe ruled. It had a huge selection and the owner was helpful providing incite on anything I’d bring to the counter. Totally chill and relaxed atmosphere to turn some pages.

abode was awesome and widely adored. the community stepped up HUGE to save it. but a sick, greedy landlord and a sick corporate monster saw to it that they were evicted forever from 16th St.

It feels like a giant slippery slope argument, that if we let in Spade, more people will get the boot to make room for more big wigs.

So you’re saying landlords don’t like money? Kid, you’ve got a LOT to learn about the world.

I can’t believe I didn’t notice her saying this last night! Actually not all that surprising based on how corporate, clueless, and tone deaf she’s proven to be. But seriously?!! WTF?!

At this point I’m not that up-in-arms about a chain store coming in (it sucks, but it’s kind of the least of our problems) but what I really find outrageous is the fact that SF’s government is basically giving a big “fuck you” to the many, many people who have mobilized against Jack Spade coming in. We elected these people, and they apparently don’t give a shit what they allow our city to become. It really makes me angry.

They did their jobs. Their job is to interpret the law and apply it. They’re not supposed to take a headcount of the “many, many people” who have the free time and will to push their cause, and then pick whichever side has more people. How is having a hearing, listening to everyone talk, and then carefully considering their decision a big “fuck you”? There’s nothing to be angry about, at least with respect to the planning commission. Change the law if you didn’t like the outcome.

Thanks for posting, Is that nativity, or a financial interest talking?

Wow. So much anger and hatred. The owner(s) of the building on 16th are not local and are merely trying to maximize their investment return. Whether we agree with that component or not is not for us to decide. Sure we can debate our philosophies as to what we believe, but it is the free market that allows these rents to sky rocket. (Or, plummet if the economy ever reverses). It’s unfortunate that a small, local business had to lose their lease. But it looks like they have found a new home where they will thrive.
Should there be rent control on commercial spaces?
At what point does a business become an evil empire?
As an example, Pet Food Express started in S.F. some 20 years ago with a single store. Hooray small, local business. They are still local and they have grown successfully. Wildly successful. Time to hate, right? We applaud you small business…just don’t become too successful appears to be our motto here. Take all the risk, employee many people….just don’t make too much money. La Boulange year 2001, we love you. 2013…How dare you become successful; sell-outs!?