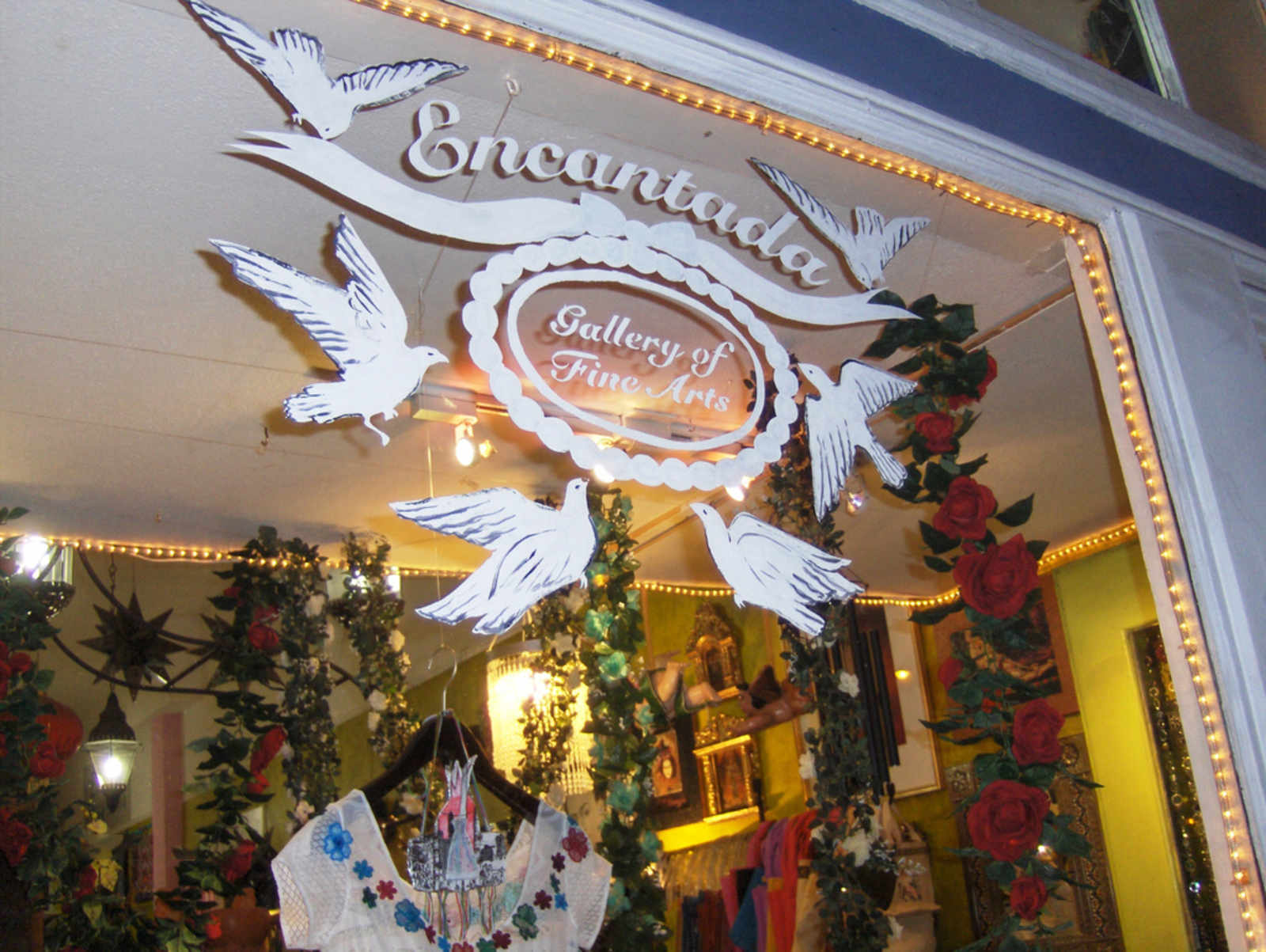 On Friday's KQED Forum, Mia Gonzales, the owner of Valencia Street's 16-year-old Encantada Gallery, shared the news that her shop had received an eviction notice, allegedly to make room for another restaurant.  In a process she calls “Urban Deportation” (“being an urban person deported out of my own community,” as she defines it), she's now looking towards 24th Street as a potential new home for her business, despite wanting to stay on Valencia.

A fundraising campaign, being circulated by Urban Music Presents, further describes the situation:

Mia has been in her store location at 908 Valencia at 20th Street since November 1, 1997 and unfortunately the new landlord is not working with her after several attempts to reach out. Mia repeatedly has tried to negotiate a new lease, but the building changed ownership a few times and now she is dealing with a bank and not a person, and has only received cursory letters stating she has to move.

Mia is hopeful she will find an alternative location, hopefully on Valencia Street as that particular street has seen much of the gentrification happening in the Mission District.

Her gallery is much more than a retail store. What she offers to the community is a place to gather, connect, learn and build relationships. “We were one of the first retail galleries in the Mission District to promote Chicano, Mexican and Latino cultural heritage and memories through exhibitions and popular arts. We showcase local artists as well as international works. We regularly host openings, where the artists and the community come together for education and insights into the artist process…” says gallery owner Mia Gonzalez.

As far as 28 minute conversations about gentrification go, KQED's is pretty good, with folks from SF Hertiage and SF Historic Preservation Commission discussing ways to curb the recent onslaught of evictions facing landmark businesses.  But if you just want to hear what Mia has to say, her segments begin at the 9:15 and 26:10 marks.

This is a person with a business. Who bought things for one price, then sold them for another, presumably higher price. Capitalism! To do that, she built a clientele. Galleries hold openings to elicit interest in the products they sell. What some might call a “community,” sounds a lot like a list of customers, who would hopefully become repeat customers, continuing her ability to sell things at a profit. Capitalism!

Eventually, her landlord, who bought property and then rented it out for money, decided the market would bear a greater rent, and wants to charge it. Capitalism!

I guess I’m just not sure how to decide whose capitalism is better than whose. If we want to say, “well, obviously, it’s the arts-supporting capitalist who should be favored by public-policy,” don’t we then run the risk of telling landlords, “don’t rent to arts-supporting capitalists, or you’ll eventually be forced to subsidize them”? Then there’d be no spaces for galleries to open in.

It’s not a question of whose capitalism, it’s the same capitalism. But there has always been a real difference between landowners and shopkeepers, even in medieval feudalism or whatever. Not to mention that “she is dealing with a bank and not a person” which makes the problem clear in this case. Capitalism’s a bitch, there are winners and losers, but let’s temper it with some humanity at least.

Yes, we operate with capitalism in this country, but we also define its parameters. Nuance!

I’d like to see some coherent elements of “nuance” that can guide our decisions. If Mission Creek Cafe gets a notice of rent increase, does it deserve special attention? Or do we expect them to raise the price of their coffee? How about Retrofit? A special used clothing rent-adjustment?

Do we make a uniform call that every retailer on Valencia gets their 2010 rates locked in for 10 years?

Does Viracoche, which apparently has no profit motive, but only trust-fund-protected weirdness-value, get to take advantage? Why?

Do we all take votes on what individual stores get what treament? Is Aquarius a Special Retail Landmark? Is Aldea Nino locked in for special rates at landlord expense, but Aldea isn’t, because it’s so large, and only recently moved in?

Hard to keep track of all the things we value, and the ways we should protect them from villainous landlords (who largely bought the properties well before the explosion on Valencia took place).

In this case the property has changed hands recently and it’s a new landlord, almost certainly looking to cash in on Valencia’s trendiness. So how about: if you purchase a property with an existing tenant in good standing for X number of years (say a decade) you can only increase the rest a certain percentage per year, plus inflation, and only after giving X months prior notice for the tenant to adjust their own prices/income accordingly, and cannot evict the tenant unless they fail to abide by the terms of their contract. How’s that for nuance?

Kudos for precision. And maybe. I could totally see SF signing off on that.

More or less, your nuance is rent control for long-term businesses. The restriction of rent control has unfairness built into it (landlord X, with renter turnover, does ok, but landlord Y, with entrenched tenants, makes a fraction as much), but we* accept that unfairness with residential property, because we acknowledge some sort of basic human need for shelter. The concept of “home” is important enough for us to overturn traditional property rights. Are we ready to extend that to businesses? Does it really hit us *right here* that Dosa might face a rent increase? How about Macy’s? Slanted Door - do they need a leg up on their landlord? The answer may be “yes,” but that’s a bridge I’m not sure has ever been crossed. I’d be interested to hear from the economic historians in the room whether there’s a history of commercial rent control, outside of maybe wartime.

*”We” is a small part of the country. SF, Oakland, Berkeley, and NYC are about the only places in the country that have residential rent control. That leaves 95% of the country without it.

I’m trying to imagine the city with commercial rent control. Will it be filled with run-down shops trying to sell stuff no one wants?

It’s worth noting that Prop 13 applies to retail/business property, but SF’s rent control does not. The landlords couldn’t ask for a better deal.

I’ve always thought it’s scandalous that Prop 13 applies to businesses. Of course, Prop 13 is scandalously unfair in all its forms.

Not just unfair, but unsustainable. Prop 13 is essentially a statewide slow-motion suicide pact.

Viracocha’s website autoplays music. They should fail and be evicted for that reason alone.

Its a good question to ask who we define the lines of our economic policies, but we are unlikely to return to market fundamentalism.

In Brazil Japan just scored the first goal and the Italians have shocked looks on their faces.

Bummer, I love that place. It’s one of my go-to shops for birthday presents and the like.

Civilization means we should not be at the mercy of survival of the fittest. Thank god.

Doesn’t “survival of the fittest” refer to the ability to reproduce?

If they have strong brand affinity, move elsewhere and people will find you. Capitalism is a bitch.

Never been in that place. But I do miss the cement plant on 17 and Harrison that became a condo. I am sad that Goodman’s is gone. That metal fab on Treat that ran many production runs all weekend long is gone replaced by an idiot broheim sorostitute beer hall – makes me sad. The Chameleon, gone. Amelia’s on Valencia gone. Donnington Park is no longer and the bar there now is over run with 20 something dipshits. Gone too are the underwear models that graced the very same bar before it was bought by Dave. It makes me sad.

We cannot have enough restaurants in this city until and unless they manage to stay open for breakfast, lunch and beyond as opposed to just for dinner.

That one change would do miracles to the long lines and the perennial dearth of places to eat at.

They could even permit the restaurants for multi-use or mixed-use vendors.

I’ve always wondered how this was possible.