Is it Time to Ban New Restaurants From Opening on Valencia? 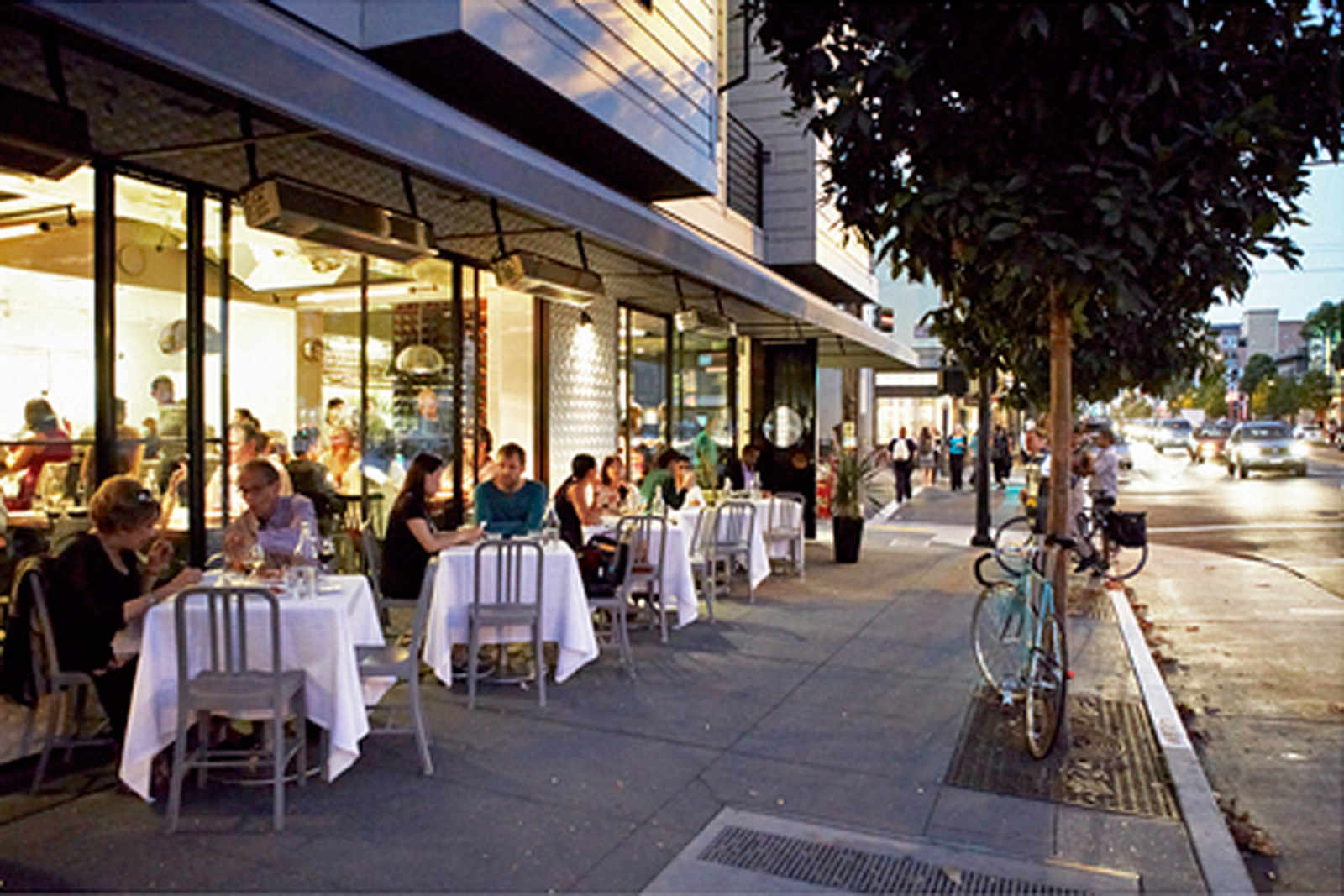 Walking down Valencia Street, it's hard not to notice the radical change that the corridor has undergone in the last two years: hours long waits for “Marina Girl Salads” at Tacolicious, tables full of wine-sippers on the sidewalk outside of Farina Pizza and Mission Cheese, that weird techno lounge that apparently serves Indian food next to Luna Park…and that's just to name a few.  Sixteen new restaurants have opened between 16th and 19th street in the last 18 months, reportedly adding “nearly 1,000 new restaurant seats on these three blocks alone.”

“Overall, it's good for consumers. It reminds me a little of North Beach in the '80s, with all these restaurants popping up at different price points,” Slanted Door and Wo Hing General Store's Charles Phan told the Chronicle last month. “It's a good vibe here. To me, it makes it more San Francisco than a lot of neighborhoods.”

But many don't want to see the Mission become North Beach 2.0—a neighborhood exclusively defined by its former glory and largely dismissed by Mission residents, who understandably want nothing to do with a mainstream tourist trap.

“Valencia needs to be a cohesive neighborhood for people who live in it,” Deena Davenport, proprietress of Glama-Rama Salon & Gallery and President of the Valencia Corridor Merchants Association (VCMA), told us over the phone. “We have no florist, no hardware store, no large grocery store.”

“Restaurants are taking over so rapidly, it's as much as tripling rents lately and creating daytime dead zones that are uninviting to shoppers.”

The Merchants Association has become so alarmed by the changes that they added a line to their mission statement specifically addressing the problem: “We endeavor to combine our voices and views toward the goal of maintaining the unique identity and independent spirit of the neighborhood.”

“It's not change that we're against. I think that we all get that change is inevitable.  And that while sometimes uncomfortable, it's not always bad,” explains Jefferson McCarley, General Manager of Mission Bicycle and VCMA board member. “But there are a variety of concerns with so many high-end dinner-only restaurants opening up at such a high rate.”

He breaks down their concerns for us:

At a point, it sounds like retailers rebelling against restaurants, but that's not the case.  Some restauranteurs and cafe owners hope to prevent a similar fate that The Summit had earlier this year, when their landlord tripled their rent and tried to bring a La Boulange Bakery into the space.  This includes the proprietor of 780 Cafe Jose Ramos, who's trying to save his cafe after the same landlord raised rents from $9,000 to $30,000 in hopes to bring a multi-million dollar sports bar to the location.

So what is there to do?

Well, there's doing nothing and letting Valencia become a high-end truck stop for Uber cabs crisscrossing the city, but everyone seems to agree that's a lousy idea.  So that leaves us with two viable options: putting a moratorium on full-service restaurants or setting up a Special Use District along Valencia, requiring any new restaurants to meet community approval before opening.

The Valencia Merchants voted Wednesday to approve a combination of the two ideas: a 1-year temporary moratorium by the Planning Department on any new full-service restaurants (counter-service and cafes are exempt) from opening between 16th and 24th, followed by the Special Use Permitting process for restaurants.  The proposal has already received support from Supervisor Scott Wiener, who will take the proposal to City Hall for a final vote.

It's not perfect, as it burdens prospective new establishments with higher start-up costs (potentially making restaurants even more expensive).  Never mind that it threatens 24th and 20th Streets with hyper-gentrification as would-be Valencia restaurants look for alternative locations for expensive eateries.  But as the legislation is expected to stabilize—if not collapse—rents along Valencia, it strikes us as the right approach for the problem.

(Note: we're told merchants along 24th are considering similar legislation before it's too late, but we were unable to reach anyone to discuss it.)

Might sound silly, but I’d propose that we require all restaurants in the area to be open for lunch every weekday. That should limit the number of places that focus on tourists.

And now I’ve researched further and realized for the first time that their main(?) location is in the Marina. So that makes sense.

I know I’m late on boarding the Tacolicious hate train, but now it’s clear to me that it’s not the kind of place that belongs in the Mission.

Anyway, I know that Tacolicious isn’t the main point of the post, but it certainly drives the point home.

Some SF eminences gris and I were just talking about this last night. I’m all for the neighborhood’s economic expansion. I especially love that many of the two-decades-vacant theaters on Mission are finally being developed into something. Nonetheless, if for parking reasons alone, we’re pretty much at the limits for restaurants.

There’s some variety in new entrants to Valencia - Ginkgo and Dijital Fix next to Rhea’s, the Chapel (a venue that has a restaurant, but offers something additional) - but more variety would be great. Keep the neighborhood economically diverse in a way the neighborhood itself can enjoy.

I think the repeated cry for a hardware store is silly, though. Lowe’s and Home Depot have killed local hardware stores. There was one nearby - Tuggy’s on 24th - but it died recently. There’s a Cole down in La Lengua, take the ten-block trip. Worse comes to worst, go to the dollar store at 17th and Mission. They’ve got a few one-time-use tools.

i want everything to stay the same!

no change. no ethnic people. no indian casinos and no weed clubs.

no one dollar coins with sack a jew eyeah.

There’s a hardware store on Valencia between 22nd and 23rd.

Who needs a hardware store when there are lesbians nearby??

Keep lesbians in the Mission!

I’m very glad to see that Jefferson McCarley highlights The impact that valet parking has on the safety of our cyclists. in his concerns. I believe that the years-ago traffic calming of Valencia is a huge part of what made it more interesting for all these new folks, however you feel about them. Threatening that is just depressing.

As someone that cycles down Valencia from Duncan to Market every day, it’s certainly been an interesting evolution to watch. The bulb-outs, while awesome for pedestrians and an important part of the streetscape, have been used as de facto white zones for cars, even when there are safer places (driveways, red zones, and heck, the median) for a quick pull-over. Since I don’t bike there at prime dining time, I don’t have a lot of experience gauging the valet issue, but would be curious to know how business owners react to people reporting illegal double-parking and other unsafe behavior, if it exists.

At any rate, coexist and be safe and all that jazz.

Ah, good to know that San Francisco neighborhood politics remains unchanged: nothing is so awful as success, and we must preserve our historic vacant storefronts at all costs.

Given the lifespan of restaurants, I would say be patient and let the market take its course. I’m sure the newest ‘noun-and-noun’ money pit won’t be around for very long.

They should abandon the moratorium on Mission St. alcohol licenses while they’re at it.

What we really need is a moratorium on parklets.

I have been advocating a strip club for years to keep housing/rent prices down. Everyone finds my idea distasteful :-[

Somewhere theres an Indian wondering why he cant throw a teepee down on Seacliff anymore. Yes, totally stupid, but the point is “keeping the rents down” is a futile exercise. You are not protected from people with money wanting to live in your neighborhood, especially when its an already-popular one with nice weather.

I would not argue that mission types sell out, join an investment bank, etc. But the reality is that not everyone gets to live wherever they want. Check out 35th and Ulloa, or is that not trendy enough?

move to the excelsior

If Valencia is the new North Beach, and Divisadero is the new Valencia, what’s the new Capp?

Haven’t we been down this road before? Didn’t upper Fillmore and Noe Valley recently end their moratoriums on restaurants due to vacant storefronts? The rent isn’t coming down any time soon. I am concerned with lesser commercial streets feeling the brunt of the further restaurantization of the mission, such as 20th.

It is sad when people dismiss North Beach. There is a lot more to North Beach than just the intersection of Columbus and Broadway! Valencia St is being cleaned up and it looks great. Many of these comments sound exactly the same when the first dot-com boom happened. The bubble will likely pop and all those new restaurants will go away. Also, do note that most restaurants don’t make it past two years!

Hello! Has anyone seen what is happening to Colma? People are dying to go there these days….in droves. It’s so disneyfied you can barely recognize it anymore. Sad. Time for the radical bourgeoisie to arm themselves and drive back these interlopers from our gates before they reach the Marina.

I don’t have the patience to read ALL of the comments… and aside from the majority of horribly biased retorts and personal opinions, I’m sure there are a few well-considered, opportunity-based responses above that I have missed.

That being said, I feel that a moratorium on anything like this, temporary or otherwise, is a terrible idea and are in direct contradiction with the very ideals that are being fought for. Instead of blockading the new high-end restaurants, we should be searching for ways to encourage the latter (idk, through tax break incentives, lessing the fees on certain classifications of new businesses and offering grants for shops to set up, even as short lease based pop ups)… this includes small hardware stores and other utility based merchants that are obviously lacking from the corridor. The unfortunately shortsighted and in some ways, completely ignorant, ‘solutions’ that are presented at the end of this article make me cringe… Involving public opinion in the decision making process is UNDOUBTEDLY the least effective step towards getting anything changed. It has never worked and this isn’t an opportunity to give it another whirl.

There is no doubt that this sort of rapid market / consumer focus shift is hugely complicated and not easy to address, but that should not distract us from facing this as a way to prompt new opportunity instead of limiting and restricting it.

To add to Dizzer’s list, DBS is three blocks from Glamorama.

Can we also get a moratorium on obnoxious writers that think they know what’s best for the community? Do you actually live in the Valencia corridor? I have several friends on the street that love the breadth of restaurants nearby. I guess residents don’t count as part of the community.

I have been on Valencia for 32 years and it’s never been better, all you fools who think you know what it needs can go jump in the Bay.