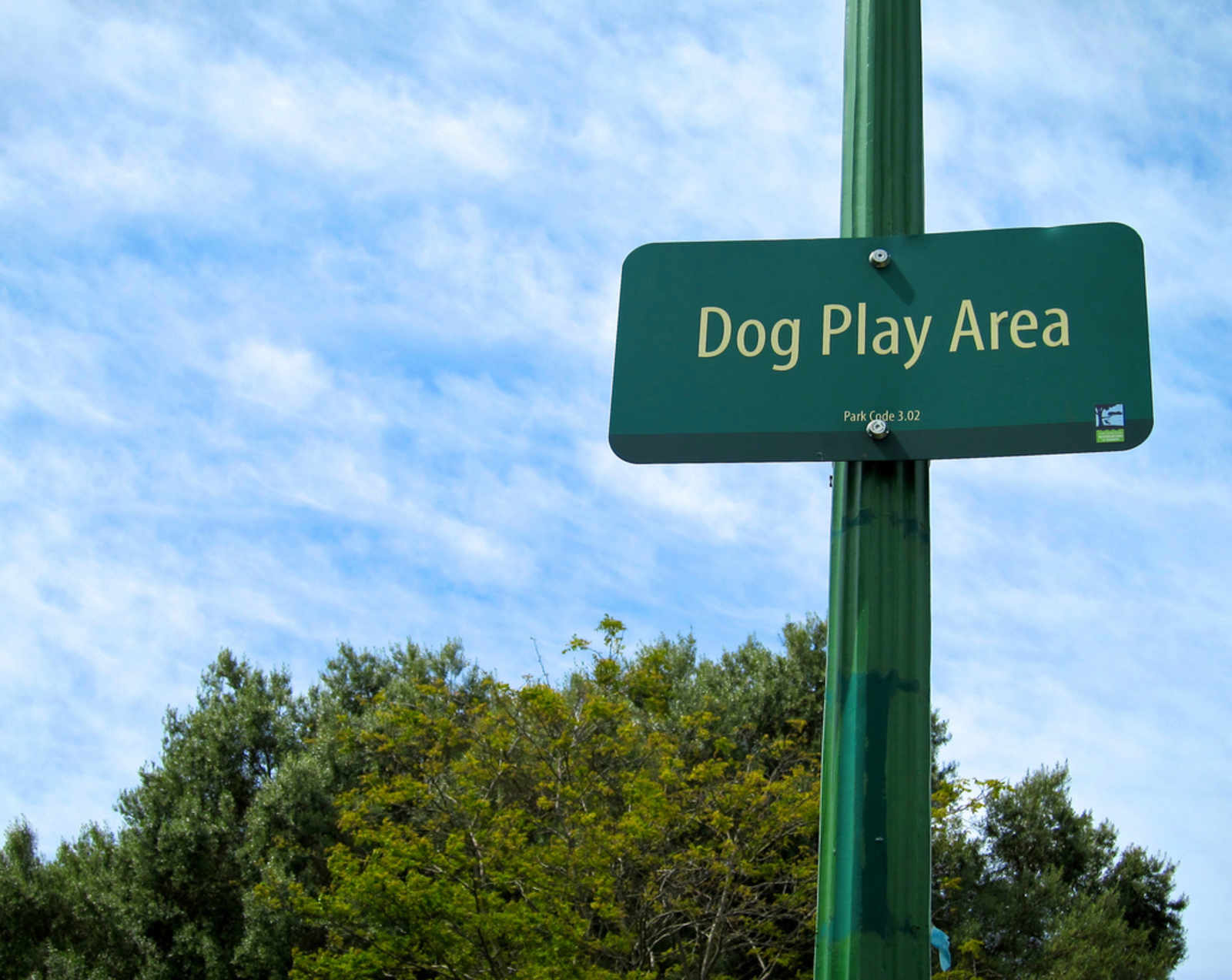 According to an appeal filed last week by Dr. Claudia Praetel, the planned two off-leash dog play areas “are by no means acceptable to many families with school-aged children who are using this park.”  She elaborates:

The Mission has a very high to higher density of children aged 6-12 per net acre, a large park with open space is paramount to their healthy development in an inner city setting, were other parks may not be accessible to them.

That's right, with dozens of pugs let loose across the park, our so-called future won't have space to beat back their looming rotundity.  The only way to spare their waistlines is to hold up the entire park renovation.

Or, at least, that's the claim.

The appeal is willfully oblivious to the park's current popularity—as if blocking the renovation and a second “legal” off-leash dog area with it will magically disperse the hundreds of adultish people littered about daily.  But even so, no matter how wildly absurd the protest is, the city has to take it seriously.

“Unfortunately, right before the deadline, an appeal was filed of the Mitigated Negative Declaration for the Dolores Park project,” a legislative aide to Supervisor Wiener wrote Friday. “This triggers a hearing at the Planning Commission and could delay consideration of the project by the Recreation and Parks Commission.  A further appeal is then possible to the Board of Supervisors.”

What's even worse is this loner appellant could effectively derail the community-driven consensus redesign process; one that involved dozens—if not hundreds—of park users over the course of two years, specifically to avoid leaving anyone out.

“Did we not have an exhaustive community process to try and settle this? Now 'a concerned citizen' will hold up the much needed and truly vetted Dolores Park renovation,” Robert Burst, co-founder of Dolores Park Works, told us.

“This is not democracy, it's harassment.”

Below, the entirety of the appeal's text, for your amusement and grief:

What children? This is San Francisco. The movie “Children of Men” was a documentary as far as I am concerned.

Children are parasites. they don’t pay taxes and are a drag on the city. most of them end up delinquents. Fuck them.

and Children of men is best embodied at that shitty mcdonalds on Haight and Stanyan lol!

And I’m sick and tried of paying for their day care…I mean school. F’em and their parents

Kevin, have you been getting writing tips from C.W. Nevius. Reads like one of his pieces.

Yes I have! He’s one of my all-time idols.

the nevius thing to do would take this opportunity to promote wiener’s awful overhaul of the environmental review legislation.

I want to punch this asshat in the face. Fuck them and their SF bullshit bullshit. Face. Punch. Hard.

Yup, the thoughtful people are on the anti-children side, promoting violence as the solution. Thanks for showing up to prove the point.

Won’t somebody please think of the children? It’s not like we just spent a jillion dollars putting in a new playground at Dolores Park or anything.

wasn’t it more like people other than “we” donated their own moneys to improve the playground at Dolores Park, because “we” the taxpayers had not, but that “we” the San Francisco government made it hard for donated improvements to happen, and delayed the playground unnecessarily for years.

Public shaming, shunning, and humiliation is called for here. Costing the city money and slowing down city improvements just because she didn’t get her way in the exhaustive, inclusive, multi-year planning process goes against every principle of good community citizenship.

How long before dog owners start taking their pups to 816 Church to do their business?

Sure, Just prove the point, you say having a place for dogs to conveniently relieve themselves is more important in San Francisco governance then children.

I said nothing of the sort. Nor did the post. There’s been two years of planning and plenty of community involvement. This was a selfish act to derail good renovations because she didn’t get her way in a shared space.

Personally, I wasn’t saying that having a place for dogs to do their business was more important than kids. I was saying that because she has single-handedly postponed the Park renovation on an anti-dog tirade, I was wondering if perhaps dog owners will be motivated to let their dogs poop on her doorstep as a statement.

As designed, “dog areas in the park” and “kids getting exercise” are not mutually exclusive. Nor is ample off-leash space in any way related to the importance of children in San Francisco’s governance. And how much was spent on the new playground and its maintenance?

“Oh please! Think of the children!” is such nonsense in any political debate.

Who is being selffish  ??  !! You encouraged the responsible intimidation tactics to have dogs pee and poo on property of someone who is speaking up for the health of children. I

so, you’re really buying the ‘for the health of children’ rhetoric?

Yes. \
Of course, there are some kids who will not play outdoors even if there are nice parks, and it is only some of the dogs that are not picked up after and scare the children, but San Francisco heavily tilts for more convenience for dogs pee and poo options over known and expensive health effects on children.

oh for fks sakes, there is zero credibility to the “children’s health issue.” There is plenty of space for the kids to run and play. And they can run and play with their dogs too. The open space for digs and kids costs next to zero. We’ve already invested in an playground to encourage kids to be active.

I did not encourage it; I wondered if/when it was going to happen.

EVERY DAY OF THE YEAR!

Can Dr. Pratel be traced somehow to Scott Wiener - like through 7 degrees of separation??

I just wonder if she’s not helping him make his case.

This is ridiculous. Kids and dogs can get along together just fine, just as they have been doing for thousands of years. This paranoia is absurd.

restricting kids interacting with off leash dogs is a known contributor to the recent peak in allergic outbreaks amongst young children.

Dr. Pratel needs to change their request to what it actually is:
“I hate dogs and don’t want them in the park”

The silly childhood obesity mantra is simply a means to the ends.

Haha, no, the deal is that parents now think the park is only for them, so their insanity should govern every decision. Watch the noose tighten from here on out.

This has absolutely NOTHING to do about childhood obesity. If it was, she would have participated in the countless meetings. This is about “I do not want to be inconvenienced by a noisy and disruptive park renovation for two years as I live right next to this park”.

Capital letters. great argument when the facts and much of public opinion are against you.

the facts and public opinion are calling “bullshit” on this letter.

Keep dogs on leash, kids too.

For once I agree with the breeders. SF dog owners are the worst. I don’t think we should accommodate people who think it’s a good idea to own a dog in this city. Fort Funston is overrun. Ocean Beach is overrun. Duboce Park is overrun. Dogs dogs dogs emotionally needy owners.

Dr. Claudia Praetel, how about you pray tell us why you think you are so important after so many meetings you never attended. Move on with your rhetoric. By the way, the only reason the kids from MHS head to the park is to get stoned before or after school.

seriously! The park is full of degenerate kids spray painting on every wall possible (Assume the HS kids), mommies with young kiddies in the enormous and gorgeous playground, hipsters, & the few of us that own houses to pay for city property and public works like this - AND WE HAVE DOGS DAMN IT! LET US HAVE SOMETHING.