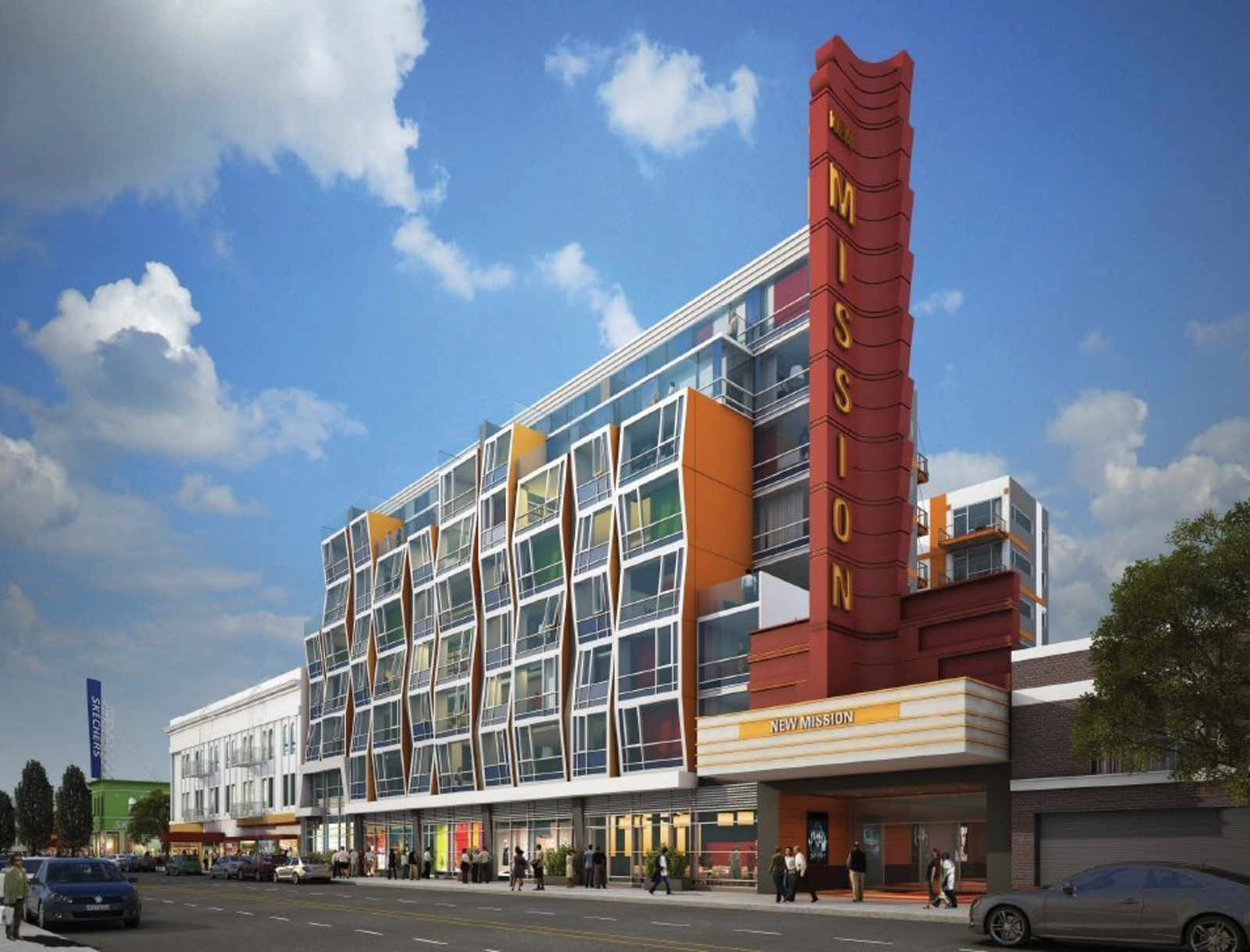 If you happened to tune into yesterday's Planning Commission meeting on SFGovTV (you didn't), you were treated to a delightful chorus of goofy neighborhood old-timers reminiscing about first kisses in the back-rows and sneaking past ushers at the New Mission Theater.  And those nostalgic stories prompted the Commission to go ahead and approve, as Planning Commissioner Kathrin Moore awkwardly and hilariously called it, the “Gangnam style, swagger style” condo and theater renovation project at 22nd and Mission.

This, without the slightest hint of hyperbole, is the best thing ever, as we're now getting a brand-spankin'-new 5-screen, 348-seat, beer and food-serving Alamo Drafthouse.  They're even looking to install a valet bike parking station in the lobby for 40+ bikes!

Construction is slated to begin as early as this summer, with an expected completion date of who-the-fuck-knows.

And with more than 100 new condos. Hopefully neighborhood people will get in on some of them.

^^^ Most likely no ‘neighborhood people’ will be able to afford to live in these luxury condos. However, since these new condos will likely take up the space currently occupied by Giant Value, it WILL create new housing that will hopefully be occupied by tech rich kids, thus freeing up more affordable housing for ‘neighborhood people.’ Guess we’ll see how it works out in practice.

I’m holding my breath harder than anybody on this whole fucking blog……this will be great, really it will.

Psyched about the theatre portion, but it’s a real shame that giant eyesore of a luxury condo tower made it through. Alas.

“Happily, enough of us disagree with you that [that it did] happen.”

Beautiful, useful, everything I could hope for.

Well, except for the beautiful part.

Does this mean we’ll be able to get Mondo posters in SF..? :D

It certainly will stand out, won’t it?

I love that there’s an Audi A5 in the foreground of the render. So perfect.

How white will the crowd be? 90% white, or 99% white? I’m so excited! Tacolicious and then flicks at the Draft House- the Mission is coming together!

What color are you?

It depends on the weather and mood for me.

I don’t care what the color proportions are, as long as there is valet parking and they take AMEX.

I heard that Rice Paper Hipster is going to open their brick and mortar location there.

HEY MORONS - you deleted my comment that this project isn’t on “23rd and Mission” like you originally posted. And then you corrected it to “22nd and Mission”. How about looking up the address? You are still wrong. It’s between 20th and 21st. Wish it was at 23rd though.

Uh. No, it’s between 21st and 22nd. Directly across the street from Doc’s Clock.

Dr. - don’t be confused, it’s between 20th and 21st. That “Sketchers” store, like the Audi, is just a rendering to make the site look more glamorous.

But in all seriousness, what’s up with deleting comments that point out an error and then making the correction - a sign of a very insecure writer?

Nope, a sign of a dickish commenter. It was a simple error, not lack of research. Also, you are wrong, it’s at 22nd and Mission directly across from Doc’s Clock, but thanks for playing.

Haha, Kevin, I KNOW it’s at 22nd, but seriously, deleting comments is just fascist. Next time someone points out your flaws just take it like a man - don’t try to erase history.

Fascist? Huh. I think moderating comments and housekeeping is the job of a site-owner. One I wish they’d do more of. We have no right to hold forth here, only an opportunity - one that’s subject to permission.

My original comment was: How about doing some research before writing stuff, it’s not on 23rd and Mission. That deserves to be deleted why?

Have you ever heard of the word “tact”?

Yeah, I’ve heard of “tact” and it involves owning up to your mistakes when someone points them out instead of sheepish covering your tracks

The barrier to entry for a website is basically zero. Instead of complaining, how about contributing? Start your own website and you can do everything the way you like.

“The barrier to entry for a website is basically zero.” Exactly my point. Let’s keep it that way. Why erect a barrier on commenting just because the author of a post is feeling self-conscious and sensitive?

You have a point? That’s great to hear. Tell us more, the entire world eagerly awaits your brilliance.

Why? Because of dreck like you, who can’t let an obvious honest mistake slip without a snotty “Hey Morons” comment, then who, after proudly declaring an even more obvious factual error, accuse the author and regular commenters of being “nazis” and “fascists.”

There’s lots of ways to tell people they made a mistake. You chose to be an asshole about it, and are now complaining about blowback. Choice = consequence.

Kevin does an awesome job with UA. I hope he enjoys and chooses to do it for as long as he wants. If he ever does move on, I hope it’s not because wads like you made his meaningful — and funny — contributions to the greater Mission more trouble than they’re worth.

So, right next door is that latin market right? With the great pupusas, and the latin butcher? Is that the block we’re talking about?

Well, I hope they have long leases, because there will be tremendous pressure on them from market forces. I’m happy for Doc Clock though- they deserve the influx of what seems like 500? additional people on Mission street. Hopefully Mission street doesn’t turn into Valencia, but change is nice.

I remember when Foreign Cinema opened across from Doc’s Clock. The old owner’s wouldn’t serve anyone with those stupid beepers to alert them when their table was ready.

The condos look like a still shot mid earthquake just before crumbling.

I HATED this blog when it first started. Now I realize I was just being an old cranky mission tenant anarchist activist greasey old socialist.
I have read almost the whole goddamn thing. Kevin, for what you wanna do, you are doing a great job!!!! I’m getting immediate news about where I live. And I even fucking laugh at some of the posts!
Many people miss the point. The building itself doesn’t look that bad to me. Sure I would love a more urban jutting facade with all that architectural lingo I don’t know that represents more of ‘mission’ housing and buildings (that you can see in barcelona, roma, etc), but the real issue is that we have a huge building, actually maybe the second tallest in the mission, going up, that is technically only going to house the top 10% of the population of the planet. So with the usual dismally social darwinist and superstitious version of free market capitalism we hear that this means they ‘revitalize’ the street and spread money all around. For parts of the service sector industry this is true. For the landlords in the area this is seriously true. For the small business people owners and their employees, that don’t ‘fit’ the 144 to 200 rich people’s tastes that move in, this is disaster. Even if this small business and its workers are part of the community and making a profit and hopefully legal wages, they will have to move, and most likely go under. Moving a small business, especially from an area with great street traffic and a loyal clientele often means its death. As many of your posters and you know, it can cost up to a hundred thousand dollars to ‘make’ a space for any type of small business. We lost at least 5,000 small businesses during the dot.com boom, and at least 20.000 lower income people had to move out. Fine, if you want upper middle class and rich people to have the say. That is the way cities have been run for the past 100 years here. As Chester Hartman says in his required reading City for Sale, “The history of american cities is the history of real estate developers controlling politics.” I don’t think any of us can change this with fighting one small fight. It’s not nostaglia, nor nimby, nor my anarchist rage at rich people. It really is fact. You cannot have a liveable, yet dirty and with crime, great urban neighborhood, with working class and middle class mixing (which reduces crime btw) in an economy that favors real estate speculation over community, stability, and affordable housing. There is no possible way to combine the FIRE sector with peoples municipal planning. When money rules politics and property values trump wages and even now…social security payments…there is no fight but the big fight. You all decide what that means.

The top 10% of the population of the planet would be virtually every single person in the United States.

The Mission has jumped the shark

If I had my very own vagina….it’d look like that! But, it would probably have more tenants.