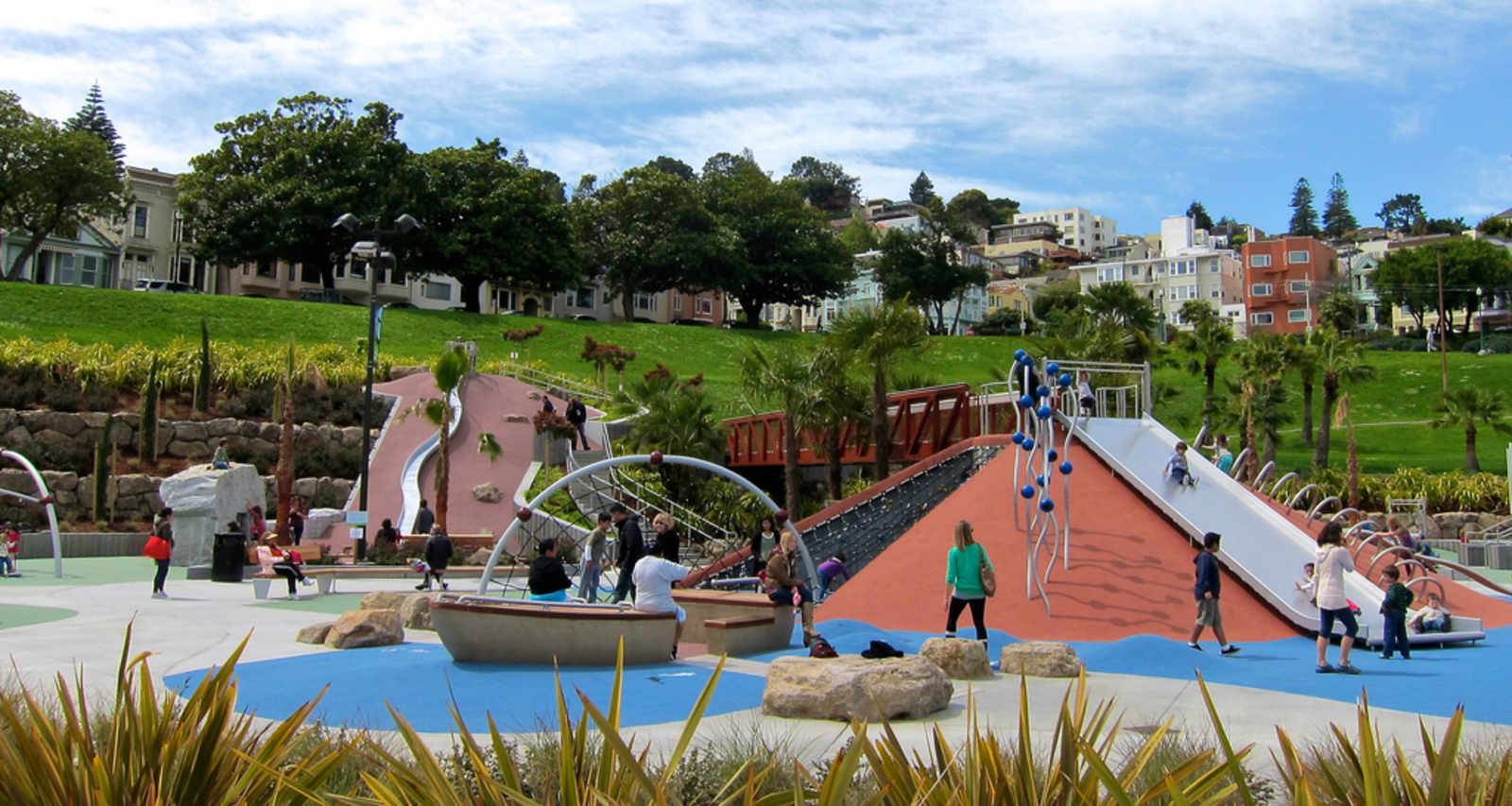 Ever since that silly playground opened a month ago, there seems to be a real effort to “clean up” the park.  It's been alleged, repeatedly, that SFPD has been trying to make gay sunbathers feel uncomfortable.  Then SFPD came after people who really need to pee.  And someone managed to rouse our city-sanctioned thugs into busting Cold Beer, Cold Water n' crew.

But that wasn't enough.  Oh no.  Now the neighborhood's population of persnickety parents wants to fence off the playground to keep their little 30 pound disasters shelthered from the savage realities of the outside world:

Some parents have said they are concerned that the recently opened Helen Diller playground in Dolores Park lacks a fence to keep out dogs, which can scare, chase or hurt their children.

Andre Kellerman, a neighbor who lives opposite the park, said she recently saw a pit bull wandering in the playground.

“It was just running aimlessly through the playground and it knocked down a toddler as it went though,” she said […]

Jana Thompson, another neighbor living close to Dolores Park, also saw the incident. To her, it feels as though “dogs have taken precedence over kids” in Dolores Park. Several neighbors have written to both the San Francisco Recreation and Park Department and district Supervisor Scott Wiener.

To Scott Wiener's credit, he thinks the people crying for a border fence are 'fucking dumb' (or, to quote, “The playground, he said, is 'an asset to the park,' and 'radically changing its design' would be inappropriate.”)  However, Dolores Park's manager wants to “keep the option to put up a fence” and quasi-community organization Dolores Park Works thinks a small fence “may be a good idea.”

And, sure, the fence “may be a good idea,” but it would cost money and divide the park and make throwing big events more difficult and generally suck.  Instead, why not enact a city ordinance mandating that parents leash their children so our beloved pups can run around without fear of bumping into some unattended biped?

So vote for me this November 6th.  For the unleashed children.

“So why not enact a city ordinance mandating that parents leash their children so our beloved pups can run around without fear of bumping into some unattended biped?”

Um, because it’s a PLAYGROUND?! for CHILDREN? Come on. Wake up and grow up.

Shouldn’t they be fencing in the dog area if the dogs are the problem?

For the record.. Dogs > Children

I was at the park the other day and I saw wolverines landing in space ships that were abducting gawd’s precious angels (aka children aka the products of reckless fornication) (just ask Ross Mirkarimi) .

The Board of Supervisors should consider installing Ronald Reagan era Star Wars Defense Systems to keep the aliens out.

No expense is too great to protect the children we pretend to care about.

Most parks in this city, including Dolores, are not legal for off-leash. Many dog owners ignore this, and it’s generally tolerated by all. So remember this fact when you start bitching about this. Keep your dog out of the playground and there’s no issue.

Kids poop in their diapers, dogs poop on the ground.

Tell the SFPD stormtroopers to ticket dog owners who let their mangy curs run off leash and we’ll all be happier.

I have a 3 year old that uses the playground a lot. He’s been knocked down by a loose dog at the playground.
More kids will be knocked down. some kid will eventually be bitten.
That said, a fence is wrong.
The park is supposed to bring people together.

Shit happens. People who are too stupid to control their dogs will let them in the fenced area anyway.

There are lots of fenced playgrounds nearby for parents who can’t handle the thought of dogs and kids.

Don’t listen to these scaredy-cat parents.

Things I could give a shit about: kids, their parents, and the self entitlement they spew. there’s a reason many people live here - it’s because this city has the least amount of kids evar, omg, and it’s great. No sniveling brats or asshole teens clogging up shit. Fuck ‘em and fuck their parents too. Just because they had to spew their juices to make themselves a little mini-me doesn’t mean I have to fucking pay for it.

I have come to like waist high fenced in playgrounds. They have one in the civic center that I take a our summer camp kids to and it really helps keeping folks out who may not be in the kids best interests. It also keeps the kids in. And when they are all running around that is a nice feeling to know they only have a couple of ways to exit. And there is a sign at the door that says no adults without children - I guess it’s an SF ordinance. Plus kids and dogs can be erratic and that would be bad day for everyone concerned if a kid got in the way of a dog. Unfortunately, accidents happen. There has already been $40,000 in damage to this new playground so an attempt at keeping adults from passing thru or hanging out might be best.

As much as the nutjob (not all, but definitely some!) parents in this city drive me crazy, I have to agree that a low barrier might be useful – not only will it keep dogs out, but keep kids in (I can’t be the only one who’s been nearly tripped by toddlers screeching around the park, and their rolling down the hill has nearly destroyed those new grass plantings). However, a better option than a fence would be a hedgerow of low shrubbery, or something like that. Something adults could easily step over, but would provide discouragement (not a barrier) to crossing.

I don’t understand why it is so hard to watch your kids! I have 7 nieces and nephews under the age of 5. When we take them to the park in SF, my husband and I watch them so that they don’t get attacked my rabid dogs or homeless people. Of course, I do think there’s some value to putting up a small fence to keep the kids from running off (and me having to chase them down), but I still think the simplest solution would be… to watch your kids.

Honestly all this hipster vs parent bullshit is just that. Bullshit.

ALMOST EVERYONE in Dolores park gets along just fine, despite the efforts of local loudmouths to declare otherwise.

You’d think the proposal was to build the Berlin Wall, based on some of these comments.

I hope a fart zone is proposed. I can’t stand when people contaminate my area with ass air.

I guess it is time to get enraged about proposals. Very SF. I fully support a fence around the existing playground. The excuse of “keeping dogs out” is a lame one. I would like it because, as a parent, that playground is HUGE and it is hard to keep your eye on your kid as they are running around, as kids do, with a mountain structure making it impossible to keep a visible eye at all times - especially when you have more than one kid in tow.

How this would “prevent events” from happening - dividing the park - more nonsense. It should be a fence around the playground as it exists in EVERY OTHER playground in the city. It would no more divide the park than the playground itself does.

That all being said, we love the new playground; we have no issue with anyone else in the park (although we avoided the pot-smoke-fog on 4/20-trash-the-park day). I do wish the high school kids would not come an hog the swings after school. Why? Because they are in freaking high school. The playground isn’t designed for them. Do I get on their case? No, I just force them to share.

The extremists take sides and refuse to budge. The rest of us just enjoy the park.