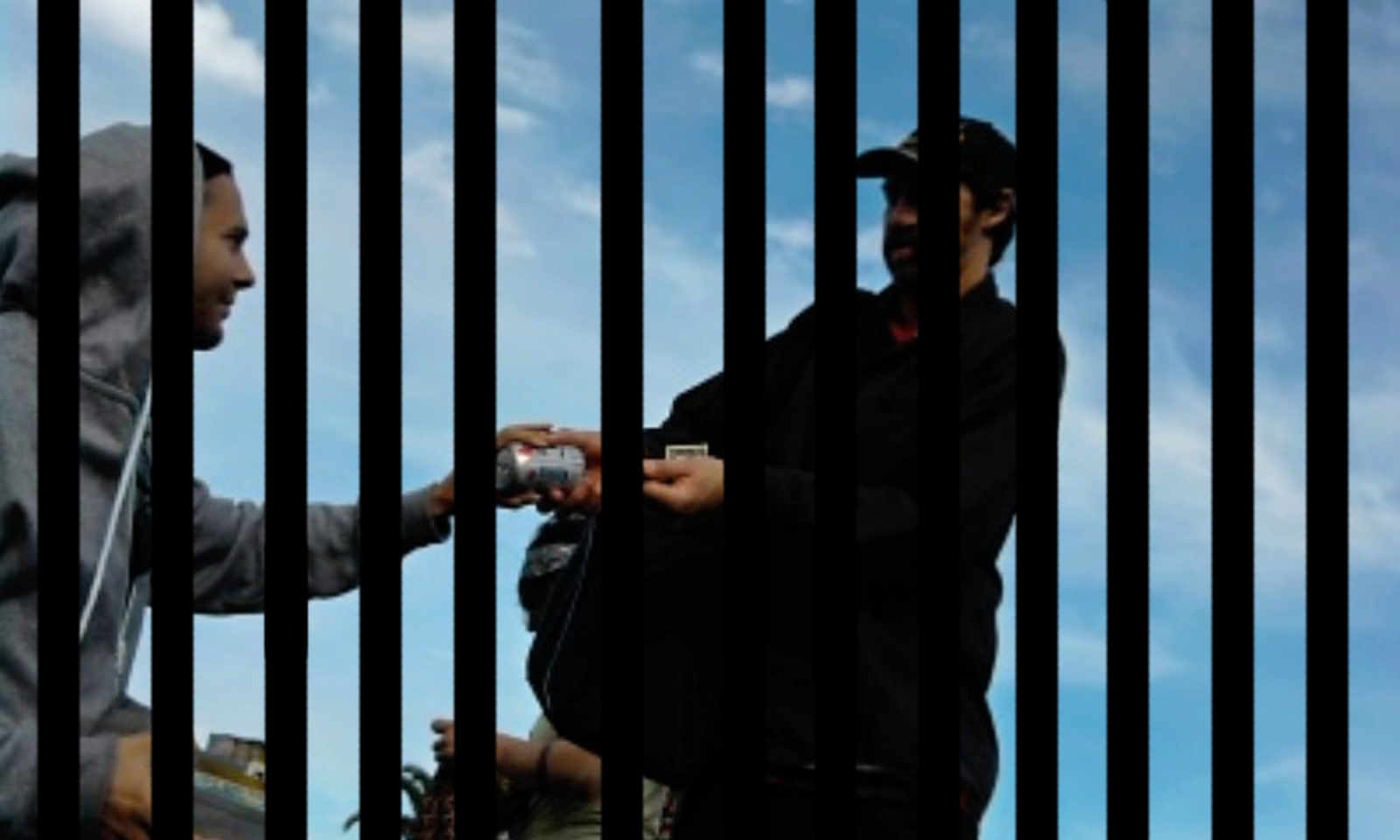 Prison bars are simulated (via MSpaint)

Outrage! At 12:54 on Saturday, Dolores Park icon James (aka “Cold Beer, Cold Water” aka “Cold Beer Dude” aka Dad?) was needlessly busted by The Man.  Seriously.

Joe Kowalke was on the scene and witnessed it all go down:

It was sunny and close to 80 degrees on Saturday and Dolores Park was packed. Cold Beer was maneuvering his way through the Fruit Shelf announcing what he had for sale - Cold Beer. Cops who were watching from atop the Shelf took note. They approached him and asked him to join them at the squad car double parked on 19th Street. He was handcuffed and taken away.

The same thing happened to a hippy girl selling Jell-O shots to raise funds for the upcoming AIDS Lifecycle.

James came up to me and told me and showed me a citation to appear in court. “For sale PBR.”  He was pretty bummed, they walked up to him and told him to come with them, then cuffed him at car and took him to 17th, released with that citation.  I told him to maybe play it low, he said that he was going to just sell water.

But seriously, James has to be one of the most non-violent bartenders in the Mission.  And how many times has he saved our ass from a trek to the corner store when we're in a deep people-watching trance?

Are we really going to let this shit stand?

Both he and the jello shot people were there selling their stuff on Sunday.
FYI…

Seriously, how are you surprised that these people were arrested for selling items (alcohol) in public, without a license? I’m not condoning the police at all, but where’s the surprise in this? If you want CHANGE, go after your supes and the rest of city hall. Hell, become active beyond just liking on facebook or re-tweeting for support, and start your own campaign to change the open container and licensing laws in your city, and don’t be so naive!

fun ends. we lose the 49er. Will the people riot on Mission St when we Win the boat race?

To the people who are giving negative feedback on this post: you are what’s wrong with this country. Here’s a guy who, instead of begging or stealing to earn his keep, goes out works for his money, buys and resells product (yes, that’s what companies do!), and you want to berate him? Ridiculous… The people who are buying beer from him will buy it anyways… From him or the store down the street… So if he wants to take the risk and spend his day trying to turn a buck, leave him the fuck alone. Free market is what this country was founded on! So leave him alone and let him sell, you assholes!

If they started enforcing the laws against drinking and smoking in the park it would be a hell of alot cleaner. Just saying.

Go find a different Park then :)

Definitely saw him selling beer later in the afternoon on Saturday. A DP icon!

Because we are a free market capitalist country. He shouldn’t need the government’s permission to sell anything. This is just another example of government crushing small businesses. I am glad that we agree on this.

Ron Paul is a racist lunatic.

I think the park will change drastically now that the playground is opened. The gay beach has pretty much cleared out, and everyone is clothed now. Personally, I don’t think it was a good move as the number of children in the City declines each year. A playground won’t keep them here, so why not cater to those that were already using the park. And why did they not include more bathrooms?!
P.S. Kid Power park is really close to there, so it’s not like it was filling a void.

They busted the girl selling jello shots to raise money for AIDS patients, the Beer and Water guy and also they busted one of the edibles guys selling fudge. He had some of the best edibles int he park too, better than the Truffle Guy and The Real Ganja Man’s edibles. Looks like its spring cleaning time in the park..

I did feel like I was breaking at least 5 laws though. I bought some amazing edibles ! I bought some beer from a dj spinning in the park that day.

As sad as you lame out of town hipsters are, it’s illegal what he’s doing because he’s not checking ID’s. If you were a parent, would you be happy some dude is giving your underage kid beer?

The people doing this were getting increasingly sketchy and annoying. Sorry for cold beer guy, but I was getting worried some turf war would break out.

17 arrests or citations in 10 days in Dolores park The park is hot!! CBCW James got a citation again.,but not arrested this time(thank goodness). Also have been seeing rangers in park warning about smoking ciggs and open beer…Not sure who can afford to pay some stupid fines these days,so be careful. cheers