Chase Bank to Open Branch on Valencia St., Neighbors Lining Up in Opposition 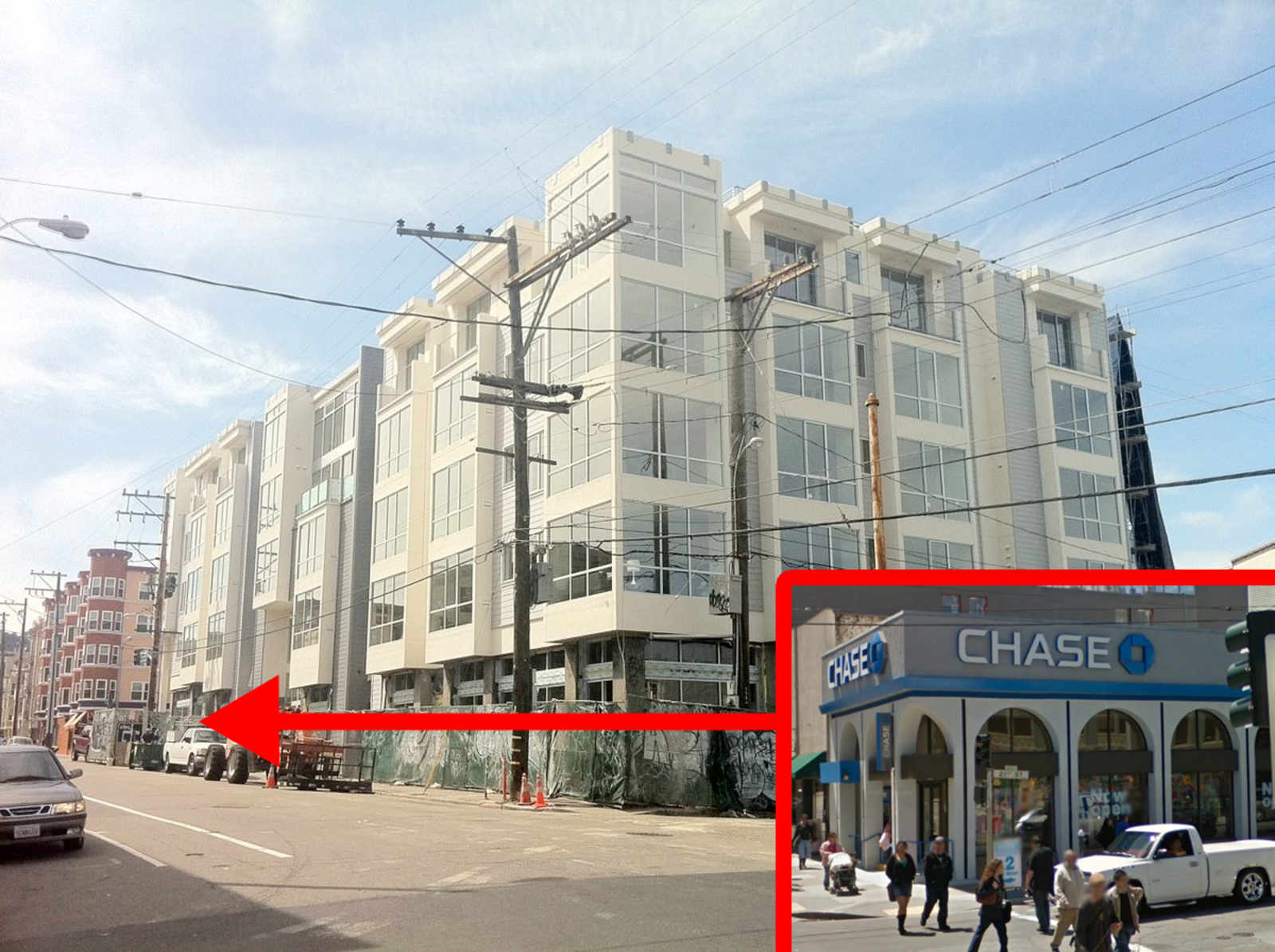 Following this morning's post about the view from the new condos at 299 Valencia (at 14th), we began receiving word from a few readers about a Chase Bank moving into the first floor retail space (which a job posting confirms as true).  From one such tipster:

By the way, do you know who one of the tenants will be at the god awful condo at 14th/Valencia? None other that Chase bank. Ergh. A group was trying to push back against this, but since big banks aren't currently included in formula retail law, they kinda gave up.

That group is focused around a Change.org petition created by Quinn Avery asking Chase Bank to “cease plans to build a new branch on 14th and Valencia in San Francisco.”  The petition reads:

This petition represents the residents of San Francisco who, in support of local and communal commerce, demand that plans to build a Chase Bank branch on 14th Street and Valencia cease immediately. While there are two Chase branches in the immediate vicinity (within several blocks), this plan to dominate banking in the area represents a larger dilemma in the Mission district and beyond. The branch’s planned location is 299 Valencia, a new loft residence currently under construction. The starting price of these lofts is $400,000. People of color and the poor will be further pushed out of the neighborhood by such housing units. Chase Bank funds foreclosure and purchases apartment buildings in San Francisco, evicting low-income, senior, and disabled tenants. Chase Bank pushes families out of the neighborhood, but also forecloses upon them nationwide for profit. By signing this petition against the opening of a new Chase branch on 14th and Valencia, you show your support of local San Francisco business against big business, big banks, and for-profit home foreclosure and eviction. San Francisco does not need another Chase branch, but rather more communal and locally owned and operated endeavors.

While the Occupy Wall Street sales pitch will likely fall on deaf ears in the neighborhood, the situation, yet again, raises the important question: is this the type of business we want to see on Valencia?

Valencia Merchants are understandably sensitive about corporate businesses moving onto the street, fearing their foray into the neighborhood will provoke landlords to evict local businesses in an effort to raise rents.  Never mind the fact a big Chase facade will just look horribly out of place on an otherwise good-looking stretch of Valencia.  And while American Apparel was blocked from moving onto Valencia in 2009 by way of San Francisco's anti-formula retail laws, Chase Bank faces no such threat, as the Planning Commission ruled that banks are not subjected to the legislation.

We're told that, in a last-ditch effort, neighbors have gotten together and pushed Supervisors Mar and Olague to co-sponsor an amendment that would classify “financial services” as formula retail, allowing neighbors to weigh in on Chase moving onto Valencia.  There's a hearing scheduled for April 12th at City Hall to review the issue, but the situation already looks pretty grim for the neighbors.

Do the feds currently classify Chase as a “bank” for the purposes for regulation? If not, I don’t see why we should either.

I wonder, is an individual bank branch really profitable enough to justify having one every few blocks? I guess it must be or else they wouldn’t do that. Or maybe it is worth more as advertising to have a sign and storefront visible everywhere the potential customer might go even if some locations don’t actually account for enough revenue to stay open on their own.

I could be wrong, but the one that just opened on Divis and Oak seems like a ghost town most of the time. Lots of employees in dark suits and hair gel standing around doing nothing and I’ve never seen a customer in there.

Oh good lord. Not this again. You people still think Valencia street really is as unique as you think it is? You really should try getting out to other parts of the city every once in a while.

I’m against this bank moving in, but only because it’s a boring business. I don’t have any problem with it on principle.

#Divission Where Valencia meets the Divisadero…. So Divis gets a Birite and a Four barrel. It seems only fair that valencia gets a Chase in return….lol

If only there were a local supervisor leading the charge against these banks.

14th St? Is Chase crazy? I have heard about a bank robber taking a bus after a bank run. With this location there is no need for a getaway driver, just an accomplice/friend to open their BMR apartment door.

(Disclaimer/PSA: robbing banks is bad, do not rob banks! Poster never had the intention or plan of robbing a bank.)

It all comes from the same refinery anyway.

I never found that part of Valencia very attractive, the facelift doesn’t hurt it.
Having a branch closer to were I live is definitely convenient.

Were there other plans for that street?

It’s already an eyesore of a building among some Mission classics on that block–the original Levi Strauss factory, the Armory–but a Chase branch too? Double downer. Ugh.

That sounds great. I’ve always been jealous of my friends with Wells Fargo, since they can get money out right at 16th & Mission. I hate having to walk up to 22nd or Castro in order to avoid ATM fees or deposit a check.

That street corner has nothing going for it anyway. As much as we like to hate on rich people who can afford condos like the above, it’s really not worse than the alternative of not having anything there.

I guess it would be better to have those “no name brand” ATMs that charge $5 for dispensing $40.

I don’t see a problem with a bank in my neighborhood. It is no less legitimate than an overpriced hipster barbershop or restaurant on Valencia.