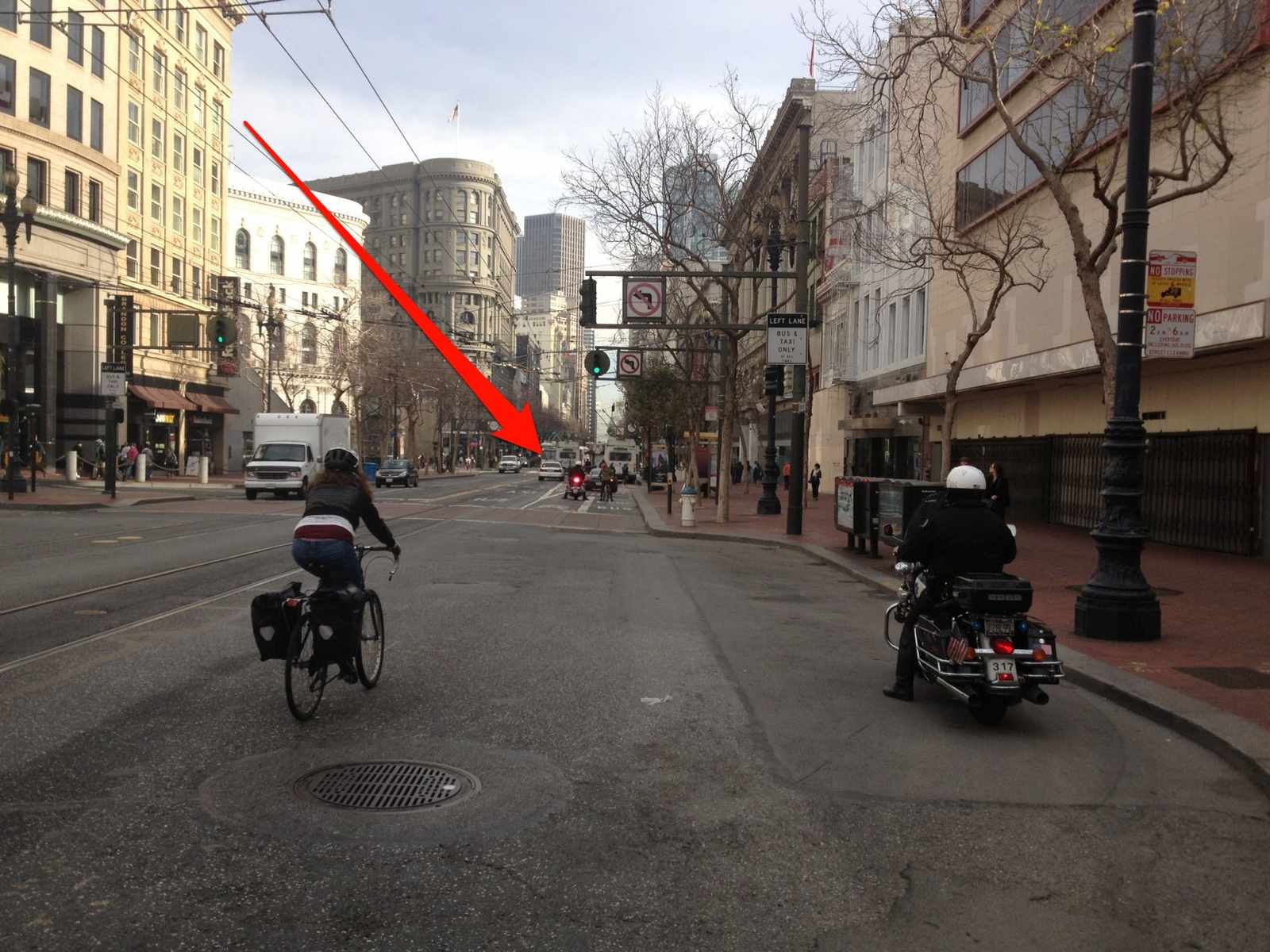 Just a heads up: there were a few cops on motorcycles needlessly slowing down people's commutes at Market and Turk earlier this morning and, as much as it pains me to say this, it seems as though people were deserving of whatever shit came their way: I watched a half dozen people casually cruise right past a pair of parked cops and through a red light. Of course, one of The Keepers of The Peace immediate hit his siren and pulled one of the riders over.

The particular incident I witnessed ended without a citation—the rider used the classic “I was just following everyone else” excuse and cop let her loose—but he was sure to pull up to the growing pack of riders at the next light and tell 'em what's up:

5-0: Everyone here knows it's illegal for cyclists to ride through a red light, right?  You have to obey the same rules as automobiles.

Me: Hey, I stopped at the light.

5-0: I know, but I want to make sure everyone here knows that car drivers pay a $450 fine for running a red.  Cyclists pay half of that.

Me: Are you guys cracking down like you did back in August?

Even though cops were just issuing warnings today, it's worth noting that they haven't been so kind in the past, so keep your eyes open this week…

UPDATE: According to The Wigg Party, SFPD is cracking down on cyclists not coming to a complete stop at stop signs in The Wiggle over the next 6 weeks.  As Morgan said, “this is outrageous and it will not stand.”

Nice to see they’re not ticketing yet.

Word of mouth does wonders in the first few rounds of enforcement.

And UA is doing a huge service in broadcasting the crackdown.

They’re apparently doing this along the Wiggle, too, although I didn’t see any cops this morning.

Excellent! Definitely need more of this kind of thing from the SFPD! Traffic laws apply to everyone.

You shall not catch me on my penny-farthing, constables!

Nice catch. I wrote a bit about this post on our blog. Curious where you stand on whether this is a good thing, in the abstract. That is, it’s lame to get a ticket and cyclists are often the undue focus of bike safety related criticism, but do you think it’s a good thing for police to enforce a standard of behavior?

I was the lucky recipient of an after-work ticket on Market at Hyde for running a red light that was yellow when I was in the intersection - so, yes, they appear to be trying to reign bicyclists in…

Cop stopped me last week for running a red light while jogging. Not kidding.

Do the crime, pay the fine.

this is good news! thanks SFPD!!