The OccupySF Raid That Never Was 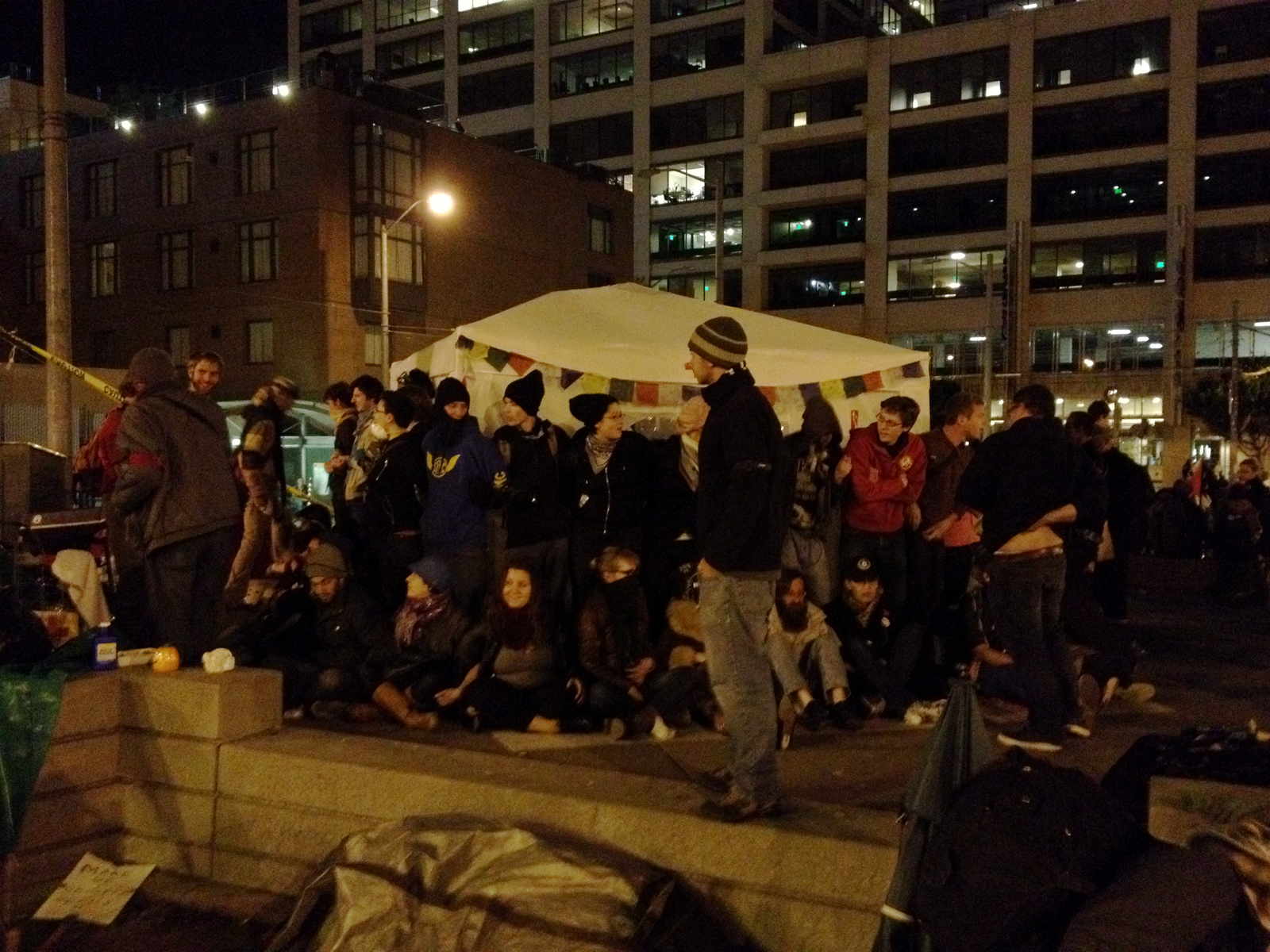 WIth rumors of an epic showdown between Occupiers and SFPD circulating all day, the mood was undeniably tense at Justin Herman Plaza this evening.

At least a hundred people dedicated themselves to be arrested by SFPD, should they invade the camp, in an effort to protect the vital services that have been established over the weeks.  The medical tent found itself insulated by two waves of linked protesters while lines of linked Occupiers ran anti-dispersal drills nearby. 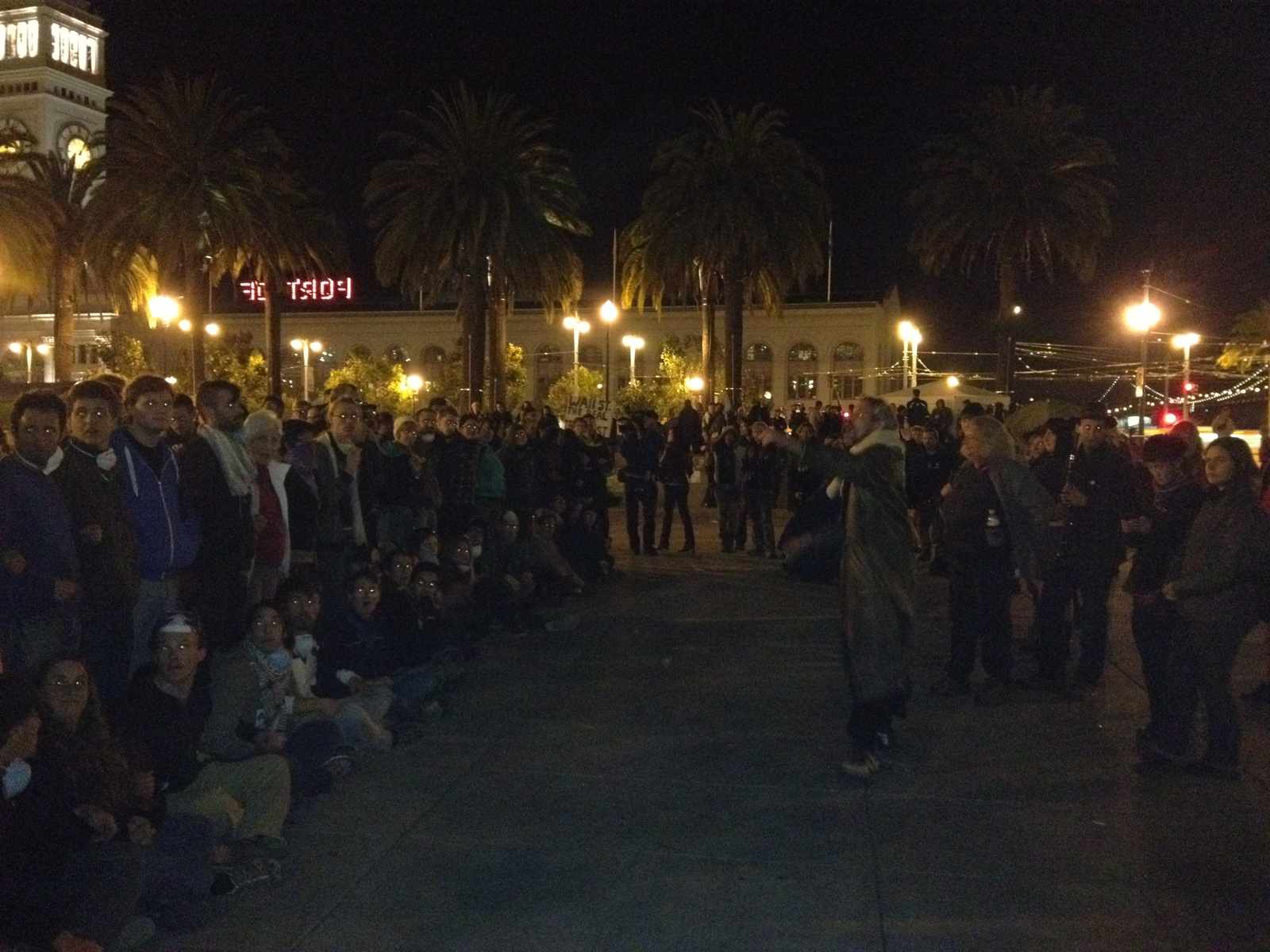 While the police never showed, the occasional fits of collective calm that would come over the camp rapidly morphed the relatively festive stratosphere into an anxious, eery gloom.  Resigned to being arrested, dedicated protesters would exhibit a zen-like calm between being educated in their rights and yelling “WE LOVE YOU” to any police officers who could possibly hear them.  Medical volunteers would tend to the front-lines, making sure everyone was prepared for the inevitable barrage of tear gas and beatings.  The National Lawyers Guild ensured everybody, regardless if they planned on getting arrested, had a lawyer's number Sharpied to their arms.

Then the brass band would kick it up again, and everyone seemed to forget, even if only temporarily, that six buses were filling up with SFPD's goons a little over a mile away. 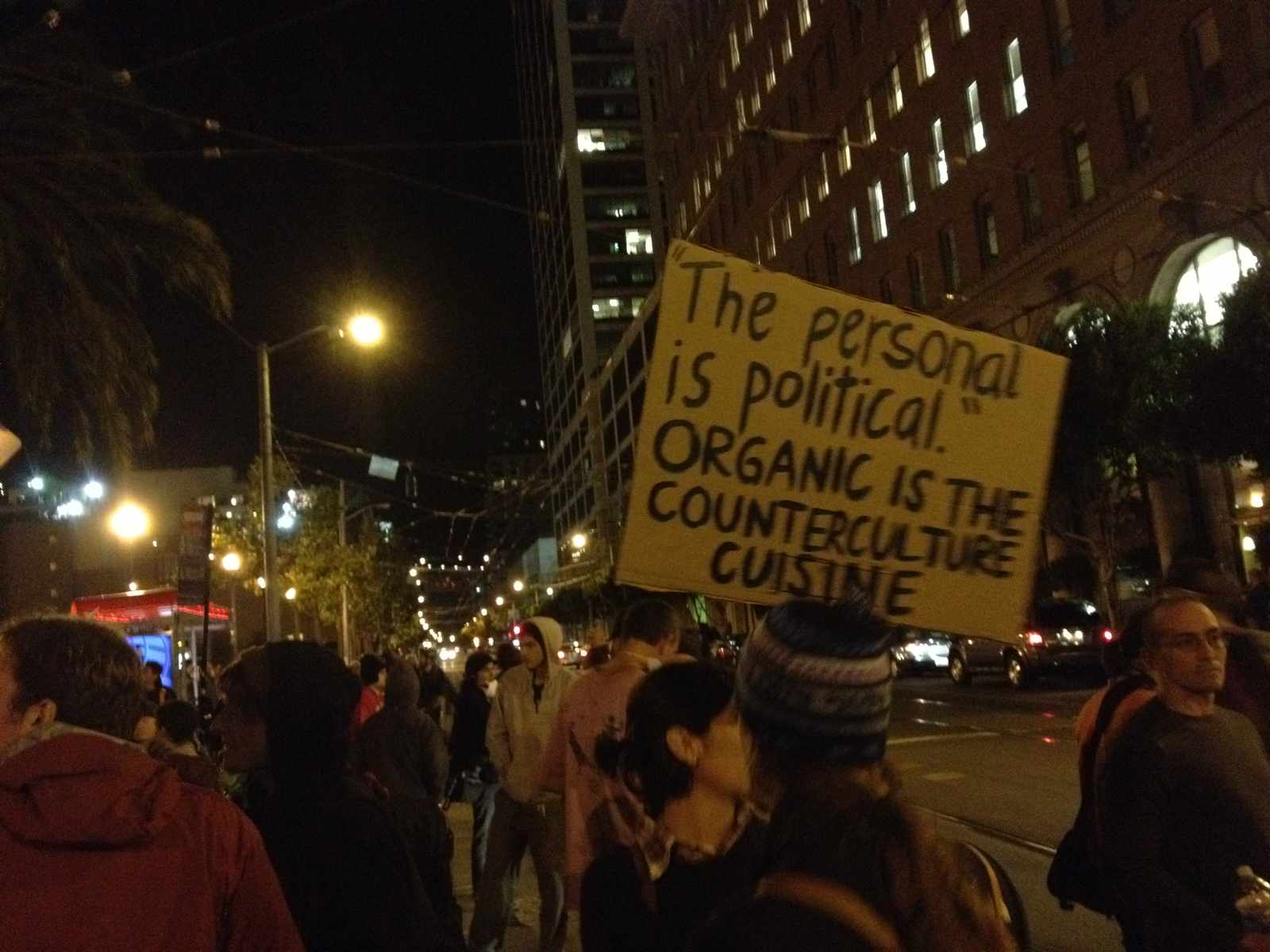 (Sidenote: I'm not completely sure what this sign means, but I think it is subliminal messaging telling me to go eat an entire bag of chocolate-covered pretzels from Whole Foods.) 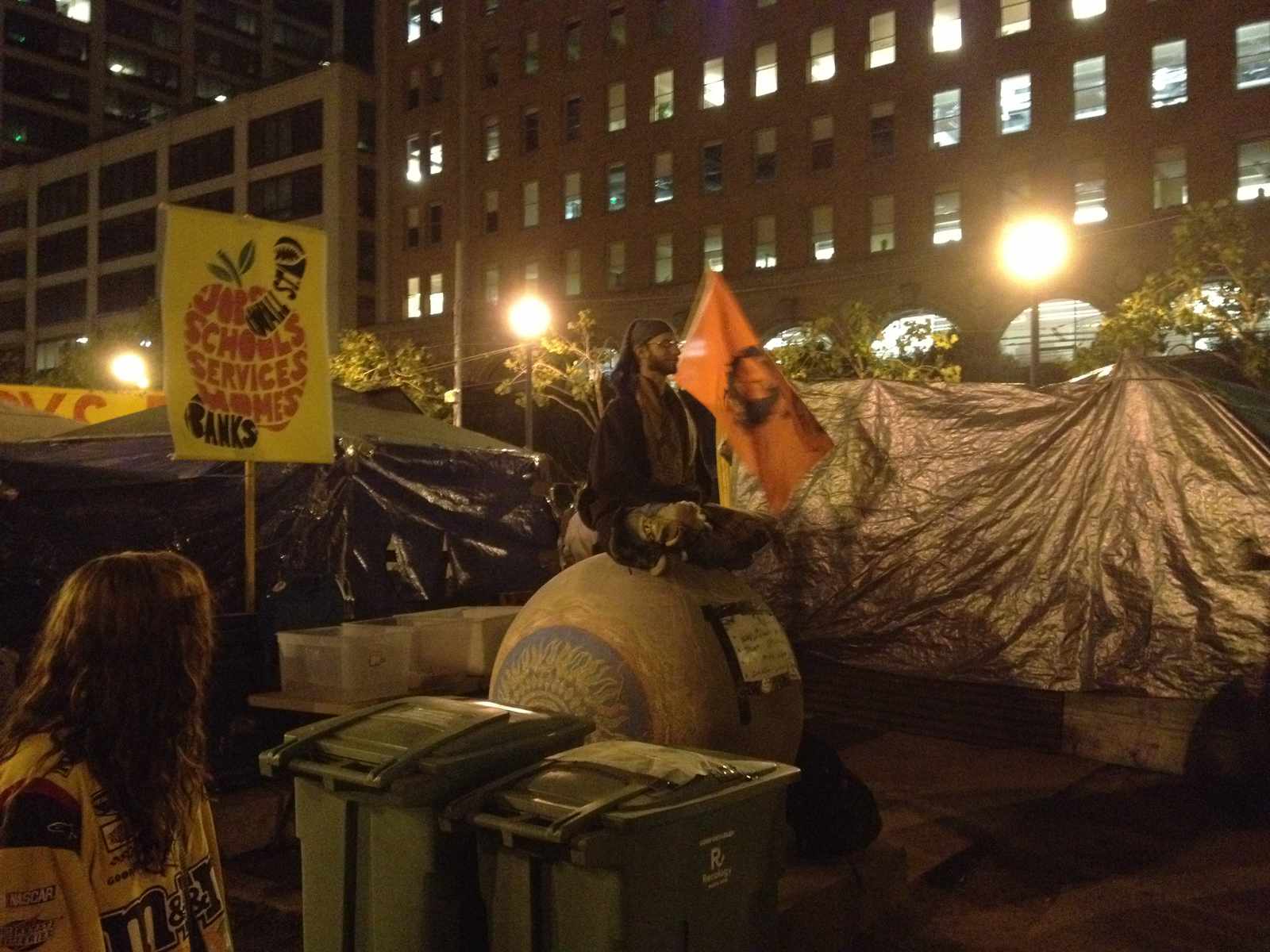 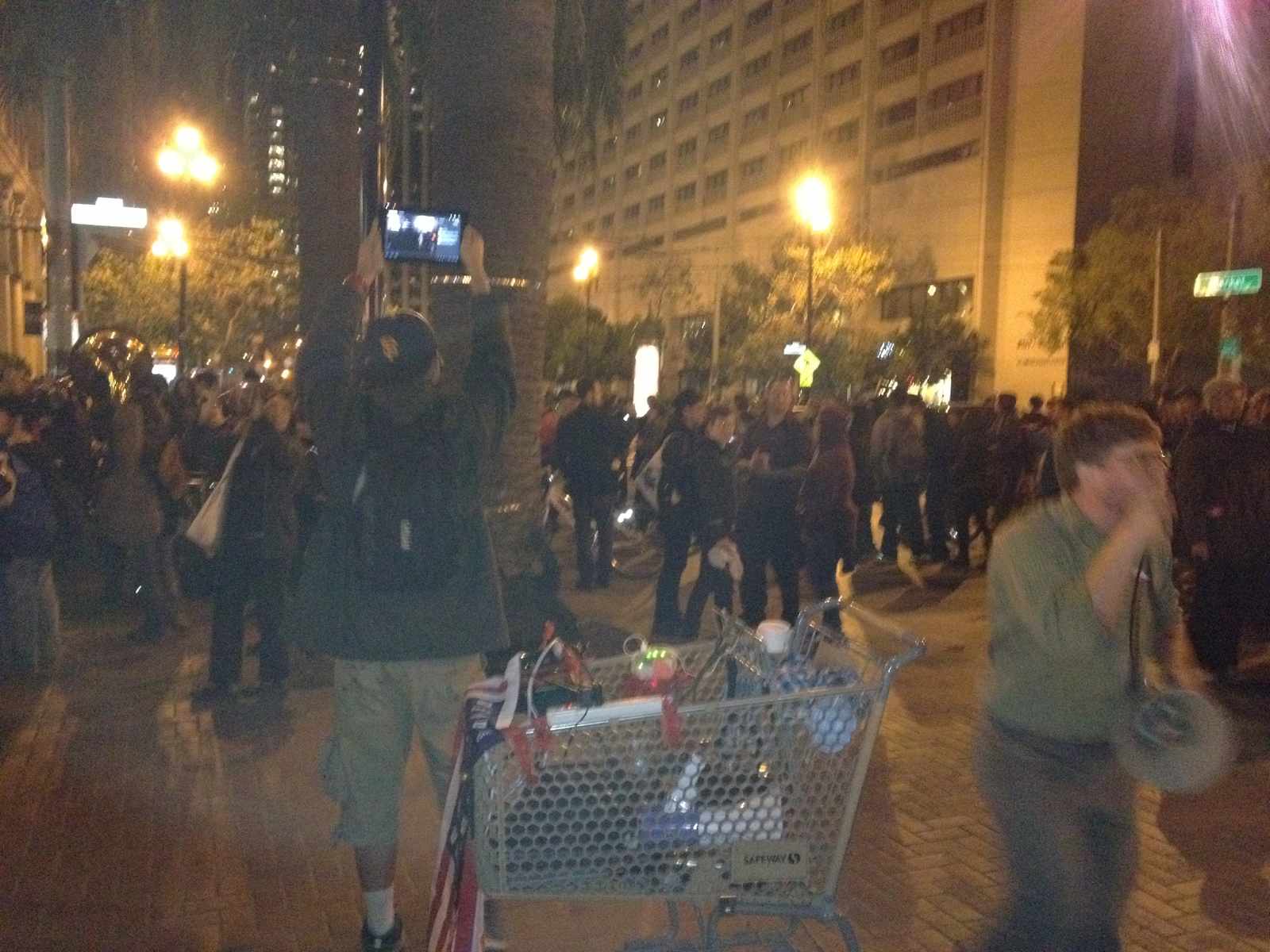 When it comes to media, this bum has the game figured out: he runs around the camp holding up an iPad that streams video and pushes around a shopping cart filled with batteries connected to WiFi equipment.  I think I saw a couple of empty beer cans in there.  But I digress.

If you've been watching the livestream of The Occupation, this intrepid lunatic and his pimped-out Safeway cart is to thank. 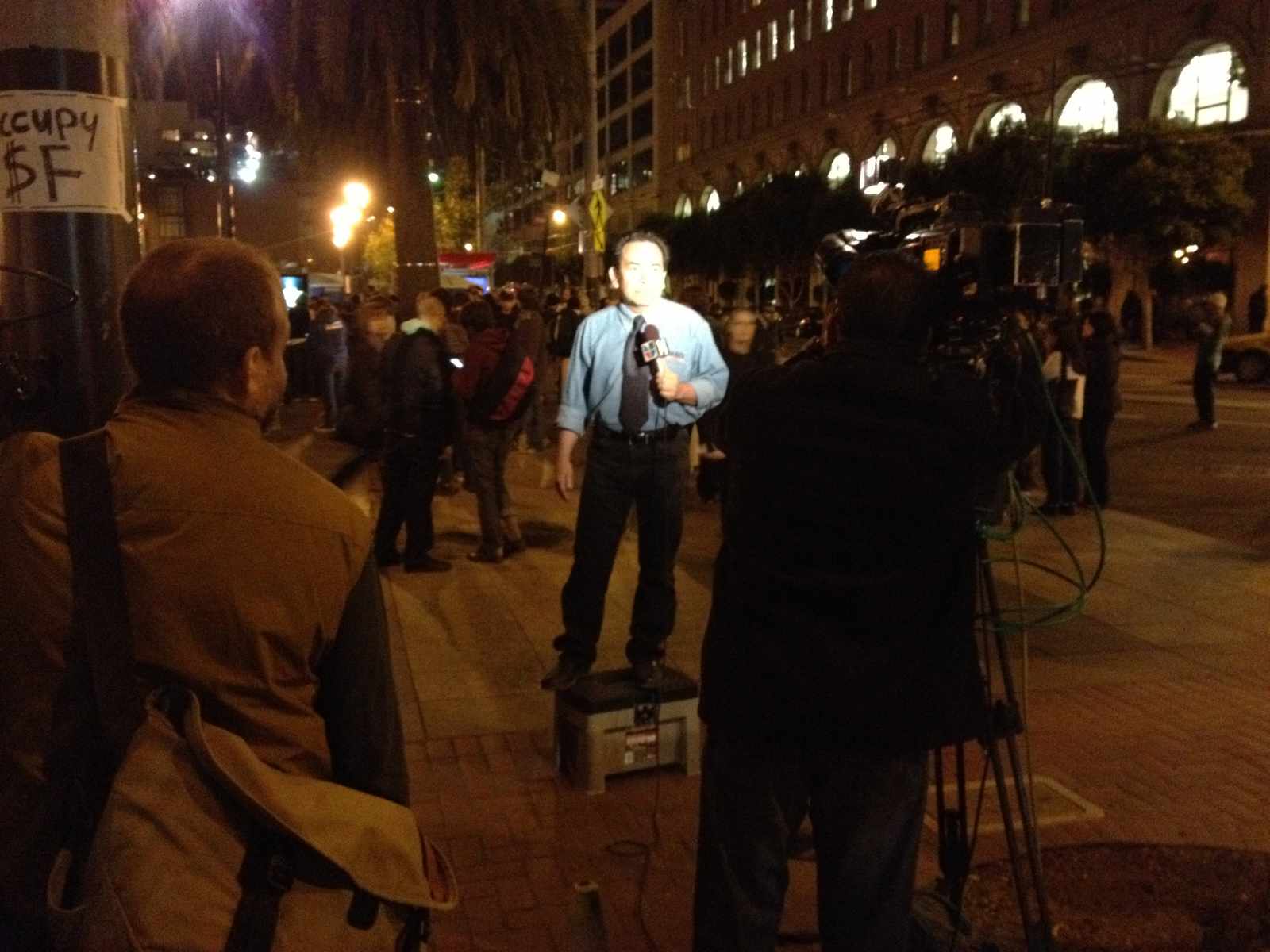 Elsewhere, this reporter from Telemundo had to stand a fucking box to report the news. 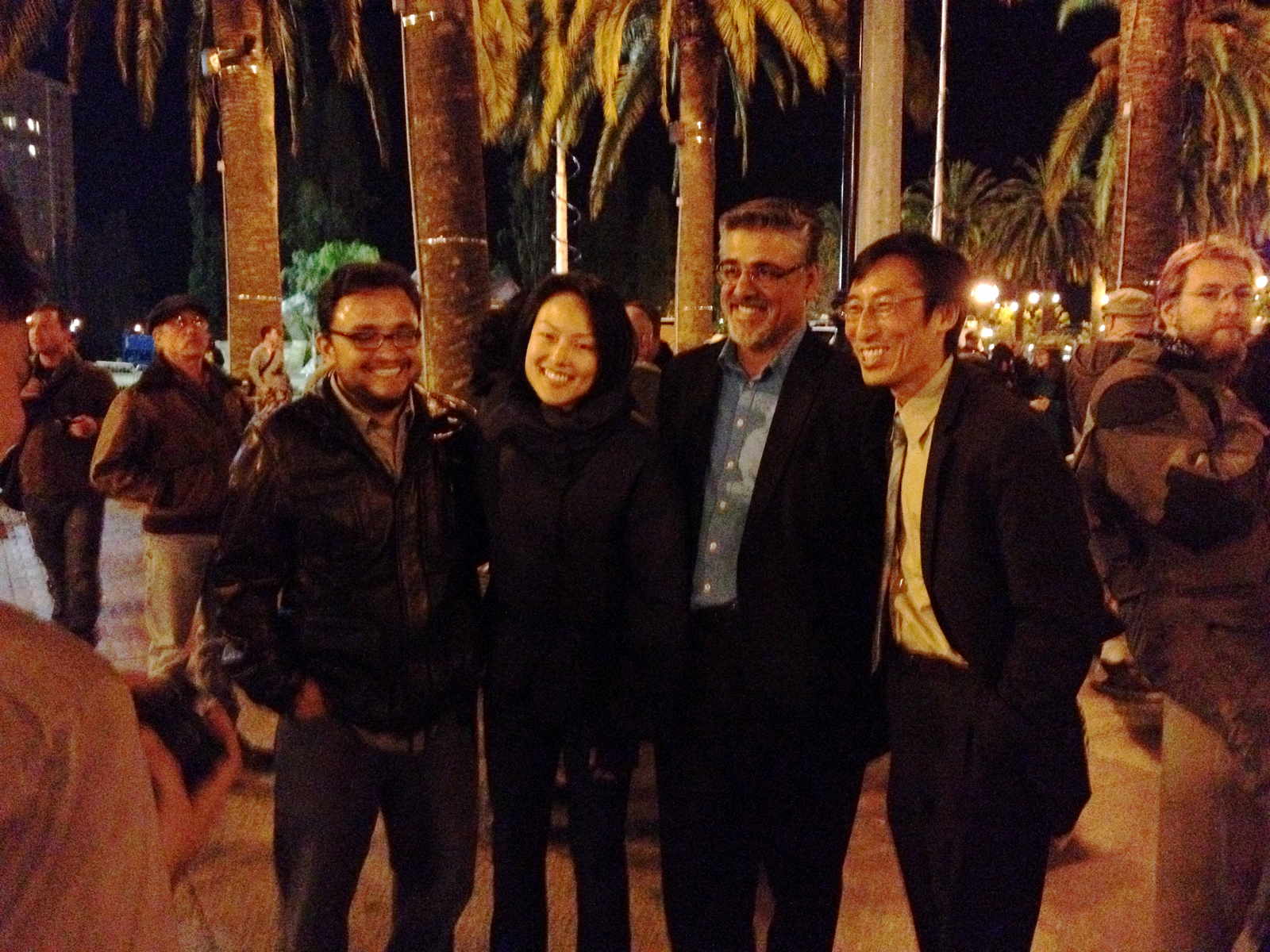 As it became evident that SFPD wasn't going to bloody up the unemployed, uninsured, and homeless, the scene began to focus on the politicians (who, to their credit, seemed to do a bang-up job of putting pressure on Mayor Ed Lee to not use Oakland-style Gestapo tactics to clean out the porta potties/acting as a human shield).  So Supervisors David Campos, Jane Kim, John Avalos, and Eric Mar posed for every journalist, photographer, blogger, and mediocre camera phone that wanted to documentent the spectacle. 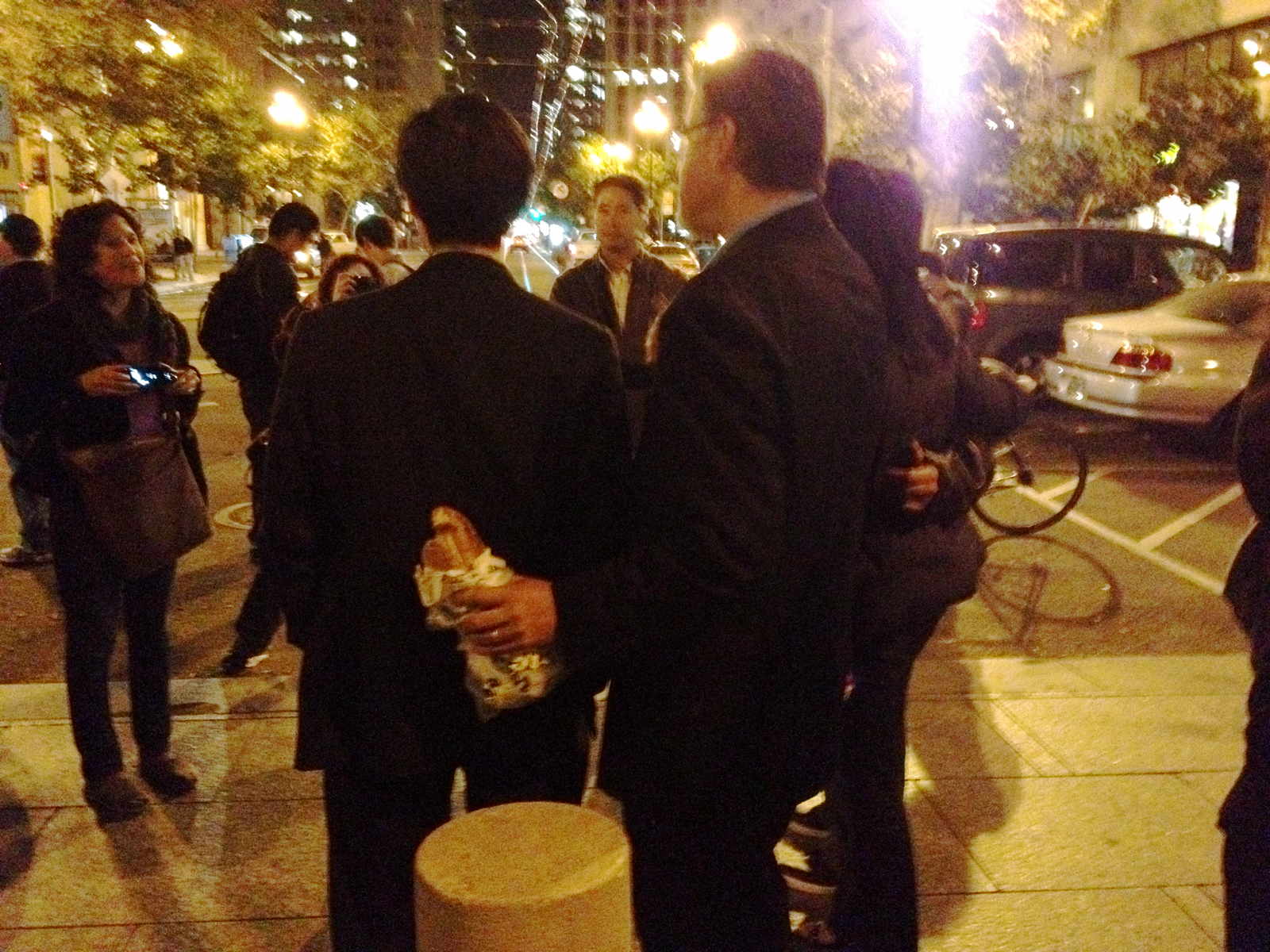 And while the media was busy taking snaps of political quartet, they missed the real story: John Avalos smearing a partially-eaten Subway sandwich all over the back of Eric Mar.

(There's a better joke in there involving betrayal, Julius Caesar, and a controversial dry cleaning bill, but I'm too exhausted to think of it right now.) 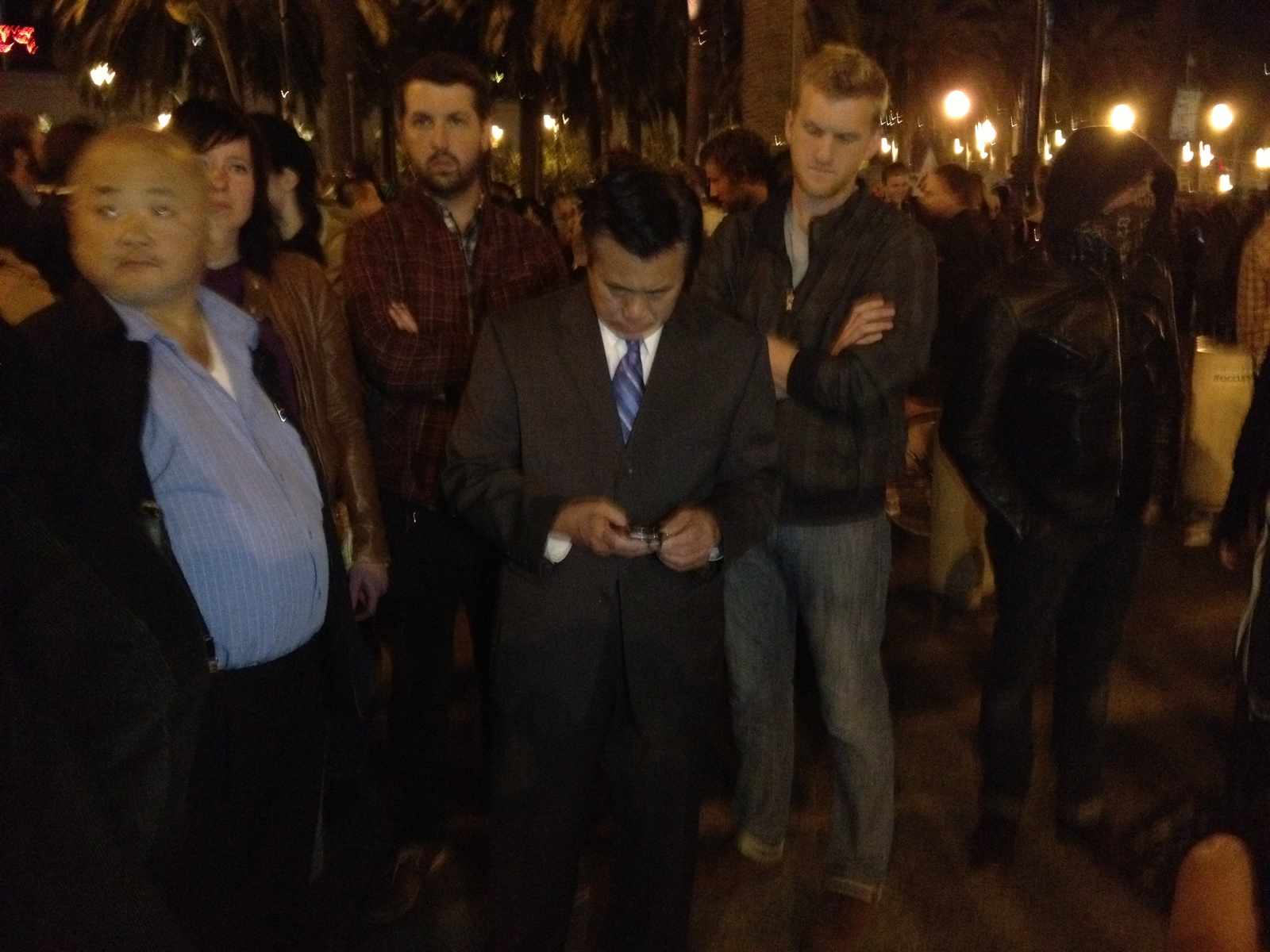 Because city politics is basically a used car salesman's version of the high school cafeteria, the progressive clique didn't seem particularly keen on letting Senator Leland Yee and his hipster henchmen hang out with them (not that it slowed him down). 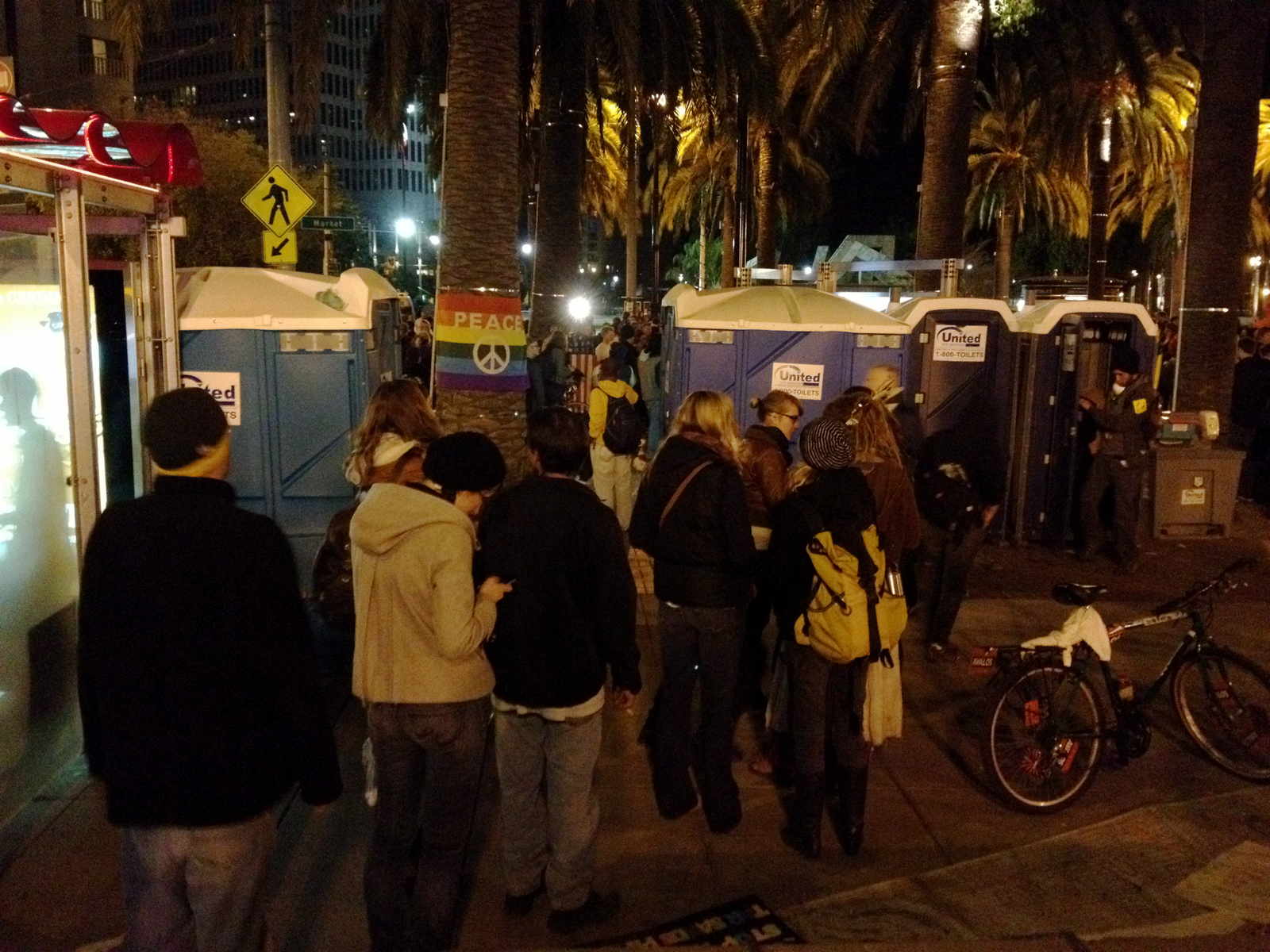 Speaking of politics, the lines to squeeze out a shit were hella gnarly. 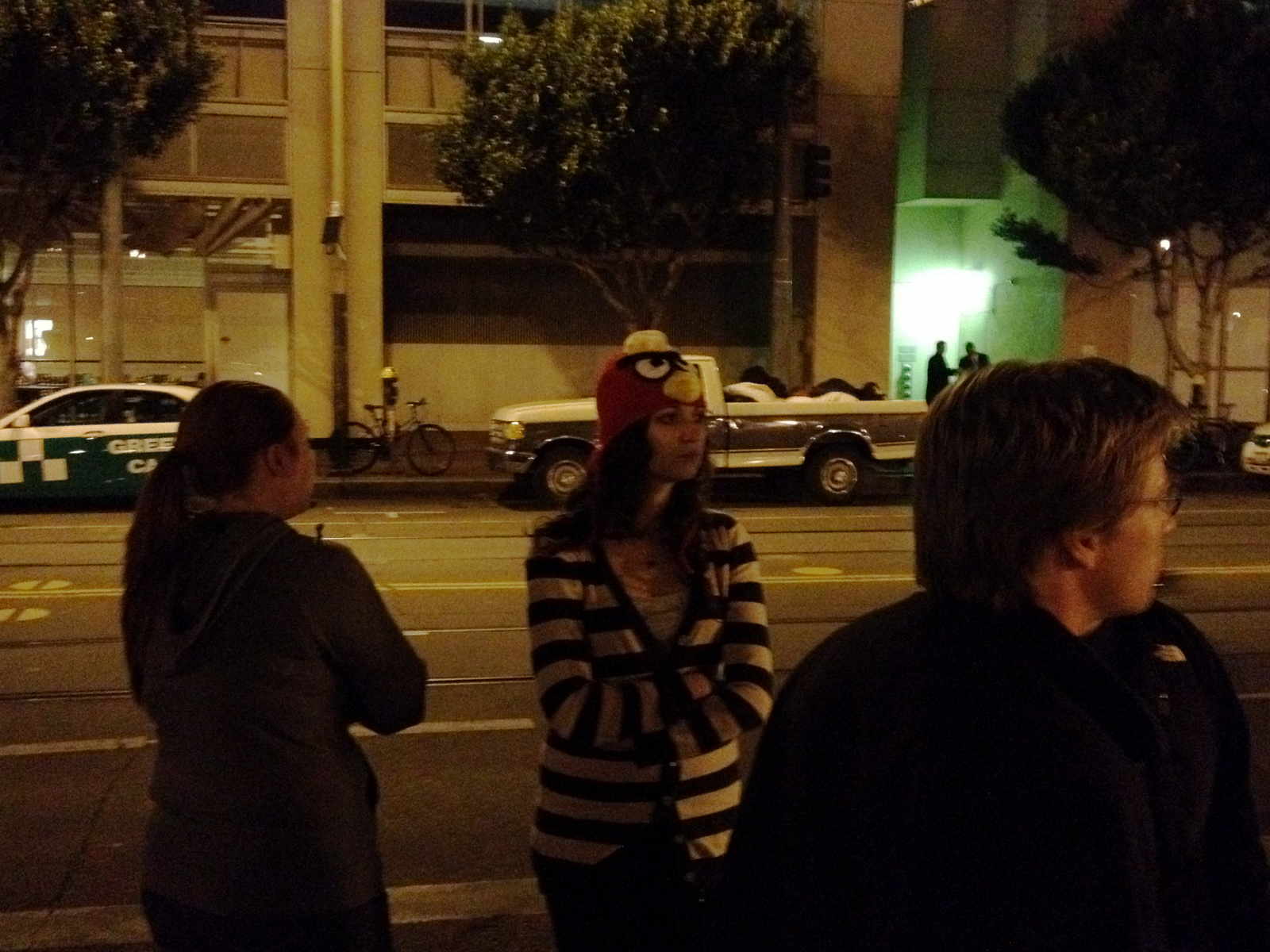 Finally, I took a photo of this Angry Bird, should she be disappeared by the cops.

That is some good reporting

I made “Organic is the counterculture cuisine” sign. Actually, I do not mean go to Whole Foods. They are more on the corporate greenwashing side of ‘organic’ food stores. They have high prices and do not make organic food accessible to all.

The quote “The personal is political” dates to the counterculture movement of the 1960s and it still applies today. When the government fails to regulate agrobusinesses such as Monsanto and allow for corruption of the food system and the very food we consume, it gets personal. Buy organic, local, sustainable, seasonal and directly from farmers as much as possible. That way your dollars vote for a future where we aren’t poisoned by the food we eat.

Wow, this is actually some quality reporting! Thanks, Kev. And thanks, also, for being out there to stand up for us!

Agree with those saying good job, let me add a hearty good job! too. Love the line, “Because city politics is basically a used car salesman’s version of the high school cafeteria…”

Excellent reporting, but let’s dig deeper. What kind of Subway sandwich was Supervisor Avalos massaging Eric Mar’s ass with? The obvious choice would be hot roast beef, but wondering if Avalos is more of a meatball marinara kinda guy.

Yeah, that “bum”? He’s a hardworking web developer with a home and countless hours of work under his belt for OccupySF both on the ground and beyond. Good reporting but I’m so tired of everyone at camp getting framed as “bums.”

(my apologies to real bums)

I am far from the level of wealth/income of the “1%”, but I do have a job in finance, and I work my ass off to make a decent living. I’m not entirely clear why I am the devil? Because I work hard, put myself through college, and am good at math? I am not rich, but I don’t identify with the occupiers at all. Somebody please tell me what I am missing. Thanks.