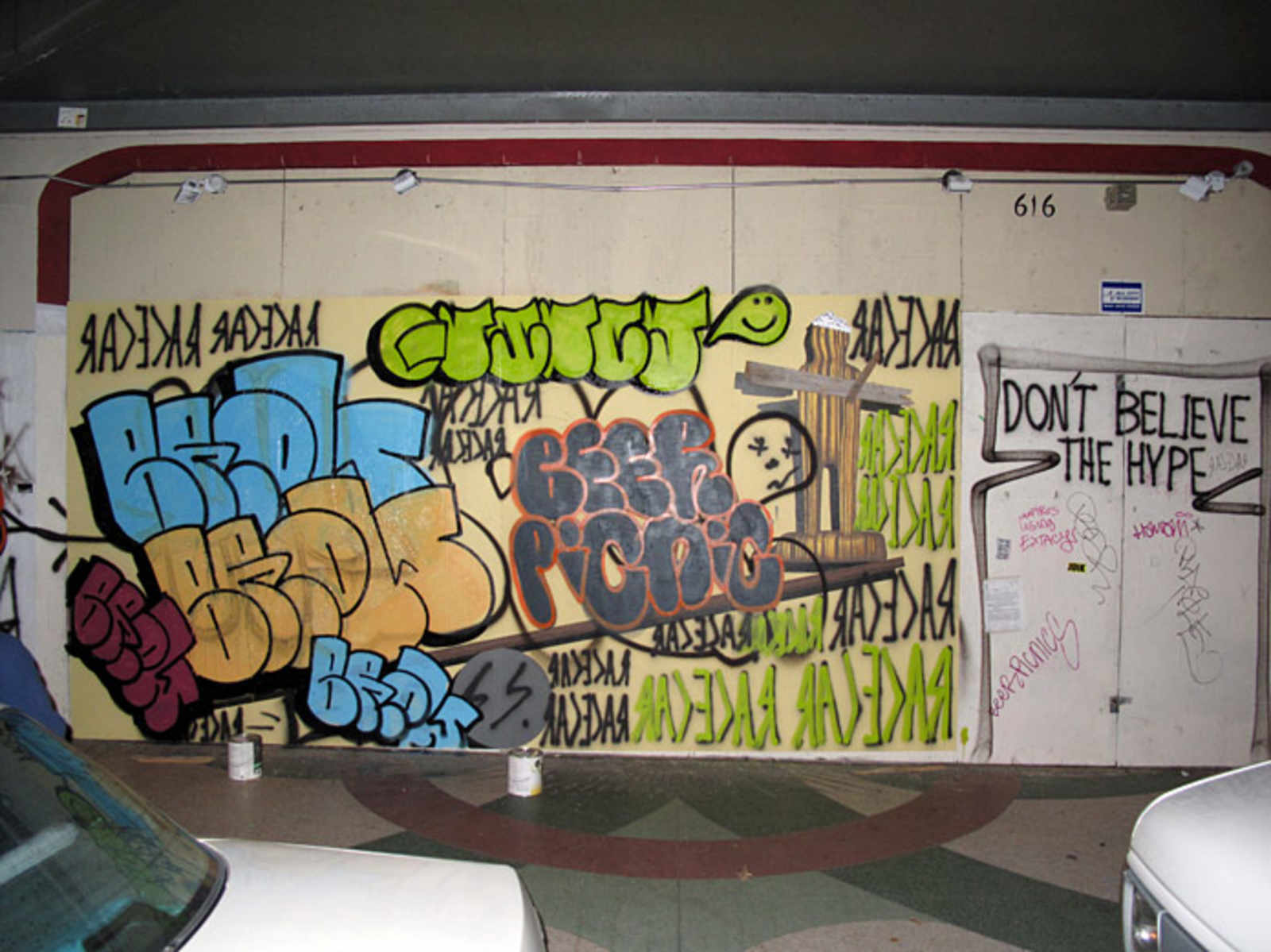 Last night, I found myself riding down the bikelaneless Divisadero when the senseless tragedy pictured above stopped me right in my fixed-gear bicycle tracks.  In a mere 24 hours, the Harding Theater went from a pleasant Henry Gunderson mural to the colorful, somewhat rad monstrosity that it is now.  Is this just a way for taggers to tell SF “no, THIS is how you vandalize a mural”?  Or perhaps Henry himself did this for publicity and/or to make a statement against Gallery Heist for painting over the previous mural?  Either way, it's becoming increasingly obvious that the space won't be able to have murals for the foreseeable future.

With that, perhaps it is time for Gallery Heist to admit they have done gone fucked up, pissed off a lot of muralists and taggers alike, and just turn it into a public art wall.  After all, if the marketing geniuses trying to rebrand Western Addition to NOPA really want their neighborhood to be the next “bohemian” 'hood safe for people who spend 25 bucks for brunch, they'll have to realize that all world-class hipster favelas have art walls.  Central Square in Cambridge, MA has “The Wall.”  Pretty much any surface in Green Point or NYC's Meatpacking District is fair game.  And let's not forget Valencia's Art Wall.  Plus, I could look at those RACECAR tags all day.

(photo by Fecal Face, who's snap is far better than the crummy cameraphone pic I snapped)

Said it elsewhere, and I’ll say it again:

This is why we can’t have nice things, people.

So it wouldn’t be unreasonable to expect to see more beefs like this popping up as Julianne Yates and Heist Gallery continue to “secure walls” that currently sport graffiti and turn them into marketing devices for their business.

The good news is more art for everyone. Layers and layers of it.
Some of it will be “procured” and “secured” and some of it won’t be.

Hype fucked up henry’s mural, and henry and friends went back last night and covered up hype. If you notice its says “dont believe the hype”. This is becoming a art, graffiti, war. But this was done by the artist and friends

To quote a younger, wiser Kevin: “Who the fuck are you to decide what is or isn’t street art?”

Not that I think you clowns have anything better to write about, but can we all just stop talking about this mural/wall of tagging? I’d rather see it covered in Jack Black movie posters and Black Eyed Peas ads like every other space in town than keep hearing about this shit everyday.

yeah why don’t we just get rid of art altogether for more advertising? Sounds like a great idea. I would much rather be told what to buy than to create dialogue about culture!