why am I mad at food?

Burritos are fucking played out 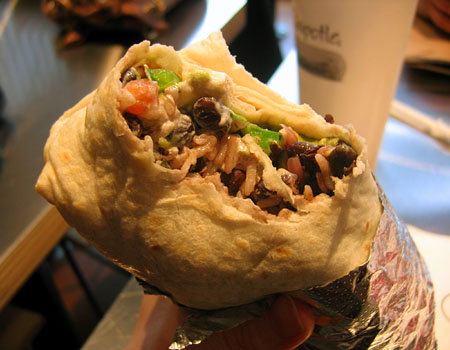 Hey I don’t know if you’ve heard but there are fucking burritos in San Francisco and everyone who moves here wants to be an expert on where to get a sloppy tube of diarrhea roulette. Like they are the first to ever have a fucking burrito. 7x7’s latest shitty idea is to combine a burrito gang bang posse with Chipotle connoisseurs and a burrito clown car to form some kind of idiot council of the elders to finally solve the question that has been plaguing amateur Mexican food eaters everywhere. This shit has been done to fucking death. I know people are attached to the burrito, but it has fucking jumped the shark and drowned in a super pool of shitty crema picante bean juice runoff.

Yes, it’s easy to hate on 7x7 but if there is one question that annoys the goddamn piss out of me it’s “where do I get the best burrito?” You know what? Fuck you with that bullshit. Still getting by on your foil wrapped training wheels because your dumbass just upgraded from fucking nachos. It’s 2010 we don’t need a goddamn panel to tell us where to get a fucking burrito. I don’t give a fuck about Mission Local’s shit poll guide for the blind.  Eating burritos doesn’t make you an expert on shit. It’s a fucking burrito and it’s fucking boring. Hell I haven’t even had one in over a year because I got tired of them. Sure it might be fun when you first get to SF and discover taquerias all over your new stomping grounds but they aren’t shit, you are not the first. Fucking tacos still shit on your tube of rice and beans. Oh but you want something big you can unwrap and fill you up. GET A GODDAMN TORTA BECAUSE SANDWICHES ARE STILL IN THE MOTHERFUCKING GAME.  The game doesn’t start and end with the burrito.

See that’s probably the most aggravating part about the “where do I get the best burrito” question. It just screams amateur status. You are a tourist when it comes to the game. I don’t give a fuck about your stories about bliss found in the depths of a super carne asada burrito. The reality is that you are at the discovery level of carne asada fries garbage plate consumers. You’re not special doggy, your opinion ain’t shit.  You want to be a boss in this game? Find some perfectly fried buche, enchiladas that never touch a stove, legit tamales that you didn’t buy at 2 am from a bucket, tell me where some awesome cochinita pibil is, tell me when you can actually tell when you got real refried beans that didn’t come out of a can just to be heated in a fucking microwave, or find some real ass barbacoa, or who makes flan with goat milk. Shit tell me anything. No one cares that you are the 1 zillionth customer to discover an above average burrito, that’s like telling me where you like to get your daily cup of hot dirty water aka coffee. It’s just not that goddamn impressive.

“Eating burritos doesn’t make you an expert on shit.”

You’re so right, a good taco is so much more satisfying than a “good” burrito … even though I am a prissy white person who eats half the meat out with a fork before daring to pick it up. It’s all about the cecina tacos at Belmar.

The most entertaining post I’ve read on UA in the last six months. Respect my guac! BURRR!

Indeed, the taco is a higher vehicle.

Any food that will fill you up and taste great for $3 after tax is muy perfecto.

OK but seriously, burritos taste good and all, but they’re too big to enjoy without consequences.

Replace the word ‘burrito’ with ‘Hipster’ and you might be on track with the real problem here.

When people ask about burritos, I tell them to pass and get a torta. Specifically at Guadalajara - carnitas.

burritos are for beginners. it’s all about the torta people.

This really makes me want to eat a burrito.

This is right. But I also hate the flipside, when motherfuckers only ride for the really exotic shit like blue corn tlacoyos with huitlacoche and look down on a goat torta.

I consign the fuck out of this. there is beauty in perfecting the most simplest of things. If a motherfucker can’t even warm up a tortilla I don’t give a shit about what kind of bullshit mango chipolte chuntey kimchi french mole trainwreck taco they are serving.

When do we get a Chipotle in the Mish?

BTW is Mish the equivalent of calling it Frisco?

“The Mish” will get a Chipotle as soon as Chevy’s lets El Tonayense park a taco truck in their parking lot.

Say what you will about Chipotle but their margaritas are the fuckin’ business. Way better than the ones at Puerto that everyone seems to love.

So La Rondalla actually IS being resurrected?

I heard it’s the granddaughters of the original owner resurrecting it in some form.

You get your refried beans at El Zocalo. Trust me.

Actually, everything is good at El Zocalo.

(Rhiannon eats one cheese Enchilada with refried beans, rice, and the salad, and also a pupusa, and makes someone else get Plantains con crema so she can have a couple bites of those)

Dang, Grrl! You’re gonna have the squirts for a week. Don’t invite Rhiannon to your house if you don’t want to end up with freckled toilet.

There will never be a right answer to “Where do I get the best burrito?” because it depends on the person eating it. Maybe you’re all about the tortillas so you go where they’re made in-house. Maybe your gut can digest scrap metal, Four Lokos, and buckets of grease so you go where they ladle your meat from a vat. And maybe you can’t fit into your skinny jeans anymore so you go where they won’t spit in your food if you ask for half carne asada - half vegetables. Don’t look to a council of elders, a poll, or even Serg to tell you what to do. Go explore.

whoa someone needs to get laiiiddddddddd

Srsly. Dude needs to grab a burrito and CHILL THE FUCK OUT.

since I’m such a good blogger and havent been on this site in months, i can definitively say this is the best thing i’ve read in the two minutes ive been back on the site.

You Mission douches really need to shut the fuck up about your gay-ass tacos and vomit-inducing burritos and venture out to the Sunset to the holy motherfucking godhead of all burritos - the super cheese at El Burrito Express.

SF Mexican food is a load of fucking bullshit… black beans, extreme quantities of grease, and way too much cold, wet crap.

lighting my lighter because this post rocks. fuck this plus one shit. lighter lit!

if anything the “best burrito evar” is a noob gauge. I mean, fuck, this discussion has been going on since the 80s

The Sunset? Where’s that? Do Mexicans live there?

Our missions blogs is deep.