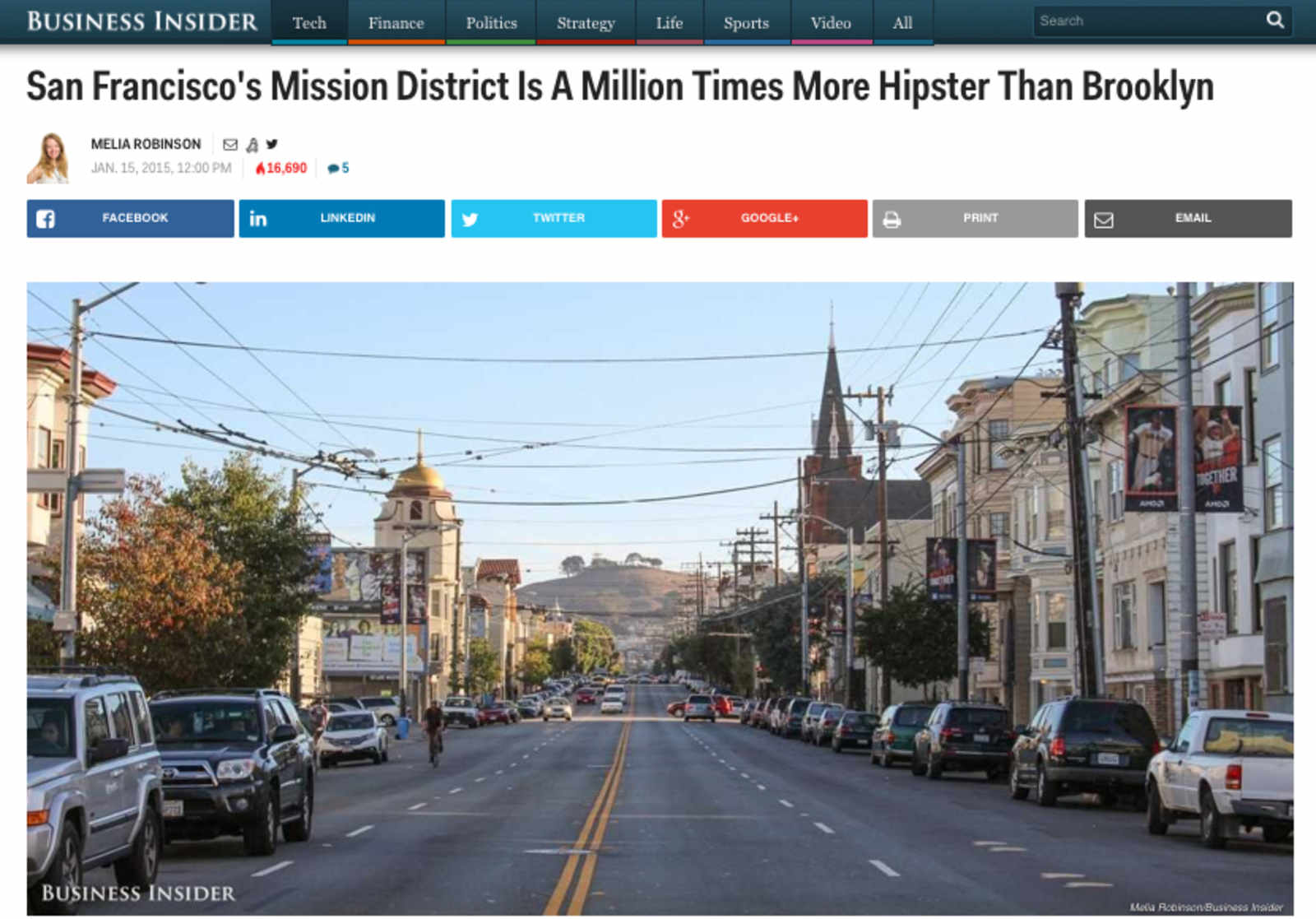 In a feat of journalist excellence, New York based Business Insider has officially declared that “the Mission is a million times more hipster than Brooklyn.” Calling the neighborhood a “Williamsburg on steroids,” the Business Insider piece continues a long tradition of East Coast publications obsessing over the Mission.

Assembled by Melia Robinson, a reporter well versed in using the listicle form as a means to unpack complicated truths, the Business Insider piece seeks to understand the neighborhood by searching for meaning in all the “beards, denim shirts, artisanal cheese, bicycles, and overpriced lattés” found within. And while the piece seems to use the terms “hipsters” and “tech workers” interchangeably, it is unwavering in its one-dimensional view of the Mission as a place overrun by an “earthy-crunchy yuppie invasion.”

But perhaps we’re not giving Business Insider enough credit. They have, after all, already done away with the article’s tired, East Coast/West Coast hipster-themed headline pictured above. The new headline, which reads “The Tech Boom Turned This Working-Class San Francisco Neighborhood Into A Hipster Haven,” demonstrates that Business Insider truly gets it by bringing the focus back to what we actually care about in San Francisco: tech.

Attention International Real Estate Investors - San Francisco’s Mission District will provide some of the highest returns on your money.

I see information from San Francisco still travels to New York via horseback.

I blame the tongue in cheek Hipster Handbook for starting this great misunderstanding of the term.  And that came out in 2003.

The general public’s idea is so far removed from the term’s roots that you may as well be calling white tech workers blipsters.

Let’s be honest, the article is just as accurate as any of the crap that’s posted here.

Is this for real? For God’s Sake, Uptown Almanac, I know Balboa Park is a bit off the trendy map, but could you please do a piece on this and get some people to the meeting to oppose this! Six thousand units? Why should the city sell the land in the first place?

“Come tell the SF Planning Department you want to see 6,000 units built at the Balboa Reservoir. SF is investigating releasing 4 public sites to developers and telling them what to build there. Site 1 is 17 acres near the Balboa Park BART station. 17 acres could hold 6,000 units, IF, IF, IF the planning department thinks there is political support for that kind of density. This is where YOU come in. You have to come tell the city you’re serious about getting to 100,000 units.”

Posted by someone name sonja with this explanation

“I started SFBA Renters’ Federation because I think the path to affordability is through density and sufficient supply. Also because I know how effective a very small number of citizens can be at planning commission hearings.”

LOL, “People in this meet-up are also in … “bitcoin dev” “mandarin meetup” “sports and tech”

They want everything. They will stop at nothing

And there are many of us who just shake our head at people who supposedly want housing to get more affordable, yet do everything to keep supply low when demand just keeps getting higher.

The city does need more housing. Go away.

Yea we need all the housing we can get.  There’s a reason why every Craigslist rental involves an open house and why 10+ people show up to it.  I literally never saw that in DC or Austin when I lived in those cities.  I actually thought it was a joke when I first heard that.

If you were living in a group house, DC always had open houses with 10+ people (in NW, at least).  The only difference between DC and SF (aside from price), is the fact that a DC room ad would get 30 responses in a week, where as an SF room ad will get 30 responses within 10 minutes of posting.

That is just not accurate.  I actually looked at several places in Columbia Heights (this was in the mid 2000s) before renting one with some friends.  There was no ‘open house.’  This was the same in our next place in H st NE.  Granted these areas at the time were not extremely popular like they are now, so maybe open houses near H st is a thing.

I suppose you got lucky. I’m from DC and rented there from 2003 - 2009, during and after college. All in Columbia heights, lived in 4 different places, went to many more house viewings.  All of my friends had the same experience - some local, some transplants.

Like near Wonderland?  Strange, I guess I never really heard about such a thing.  The area never really seemed that popular to me outside of a few hipster bars (wonderland), U street or some such I could understand.  When I went to H street NE I especially never encountered white people looking to rent.  I went back a bit ago and Little Miss Whiskey, even the Pug were populated by the popped collar assholes that made me kind of hate that city near the end.  At least they havent found Lonely Hearts Club yet!

Yeah, basically near Wonderland along 11th but also over into Mt Pleasant.  Visiting recently, 11th st has become a nightmare.  I definitely believe you about H St area not having large open houses in the mid 2000s.  I wouldn’t be surprised if it’s happening now, though.  DC has somehow managed to get exponentially worse in the last few years…not too dissimilar from SF.

What a scam. The scandal is what speculation has done to rental rates. It’s not a crisis that everyone who wants to live to a place cannot because there is not enough room.

The fancy venture capital banks backing the hah, “luxury” condos are the same ones pushing “affordable” housing, believe me. It’s all about the REITs.

What I want to see addressed is how many small to medium fish are being invited to INVEST in these ventures. That’s a good way to get people on the band wagon I’ll bet.

Don’t worry, I’m not asking to see anyone’s bank statement. Listening to pins drop is fine with me. I’ve heard some hair curdling conversations though. Twelve percent return, sweet. *eyeroll* They’re selling us out with this high density housing crock of crap.

Your parents retirement investments are all wrapped up in REITs as well, even if they don’t know it because they’re got the prefab kind put together by money managers or whatever.

I suppose you got lucky. I’m from DC and rented there from 2003 - 2009, during and after college. All in Columbia heights, lived in 4 different places, went to many more house viewings.  All of my friends had the same experience - some local, some transplants.