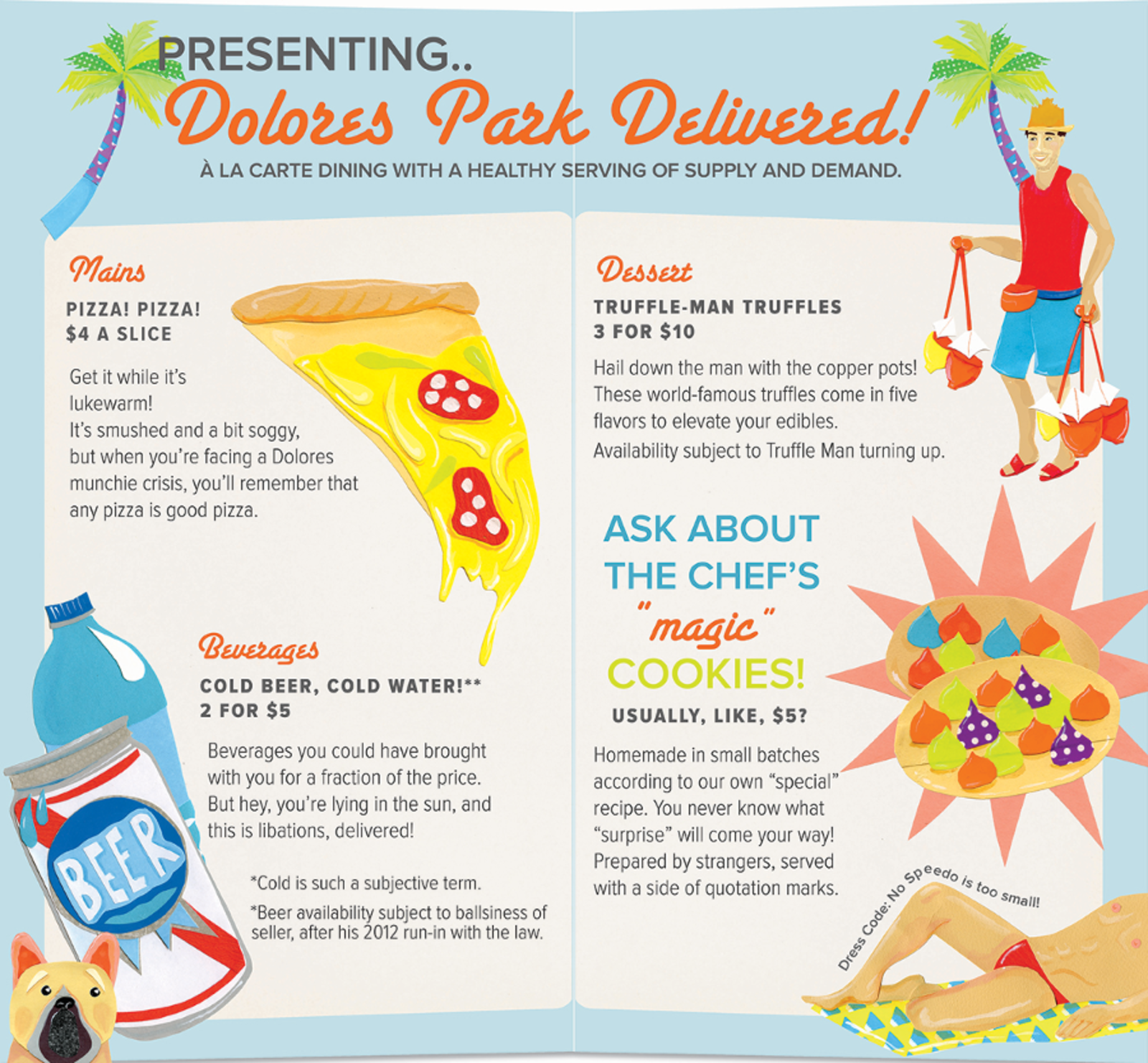 In their continuing effort to appeal to a demographic that by now should really know better, The Bold Italic, owned by the New York-based Gannett Media Corporation, has helpfully decided to publish “one easy menu” of “all the classic DP options.” “DP,” of course, being the slang term used by the in-the-know kids of San Francisco to refer to Dolores Park.

Presented in a style custom tailored for someone who spends his days disrupting established industries, but secretly considers himself an artist because he keeps an elaborately curated Pinterest board, the not-so-exhaustive list touches on some key points. To wit:

Some park gems that didn’t make The Bold Italic’s cut:

And while it is clear that this is just another puff piece from our friends working hard to “[inspire] people to think differently about San Francisco,” it is difficult not to see the graphic’s headline of “Presenting.. Dolores Park Delivered!” in a manner perhaps not entirely intended by the author. That is, this piece perfectly embodies what in many ways The Bold Italic has become: little slices of clickbait delivered to the desks of the aspirant hip taking a moment out of their busy schedules to festishize the bohemian park lifestyle.

Because here’s the thing— this “menu” is clearly not for actual park-goers. Rather, it exists as a little, easily digested bland bit of San Francisco culture, graciously made palatable by our friends at Gannett.

This really rankled me when I first saw it on the Bold Italic, but I couldn’t put my finger on why. Thank you for getting it right, exactly.

The Bold Italic has been driving me especially crazy lately.  Thanks for this bulls-eye observation.

Yes, I’ve been tempted to start a tally of how many things TBI tags as “only in San Francisco!” are in fact ubiquitous anywhere there’s young, affluent white people.

Anyway, if you take requests, please do 7x7 next.

As with most of TBI’s pieces, this is yet another “I get it! I know what they’re talking about!” piece for the neon-wayferer crowd that the city is only lucky enough to quarantine during Outside Lands.

i fucking hate that rag and fully support ragging on them.

Thank you, Jack!  Brownies (and brownie points) for you, sweet one! -Hey, Cookie!