Another Dive Bites the Dust 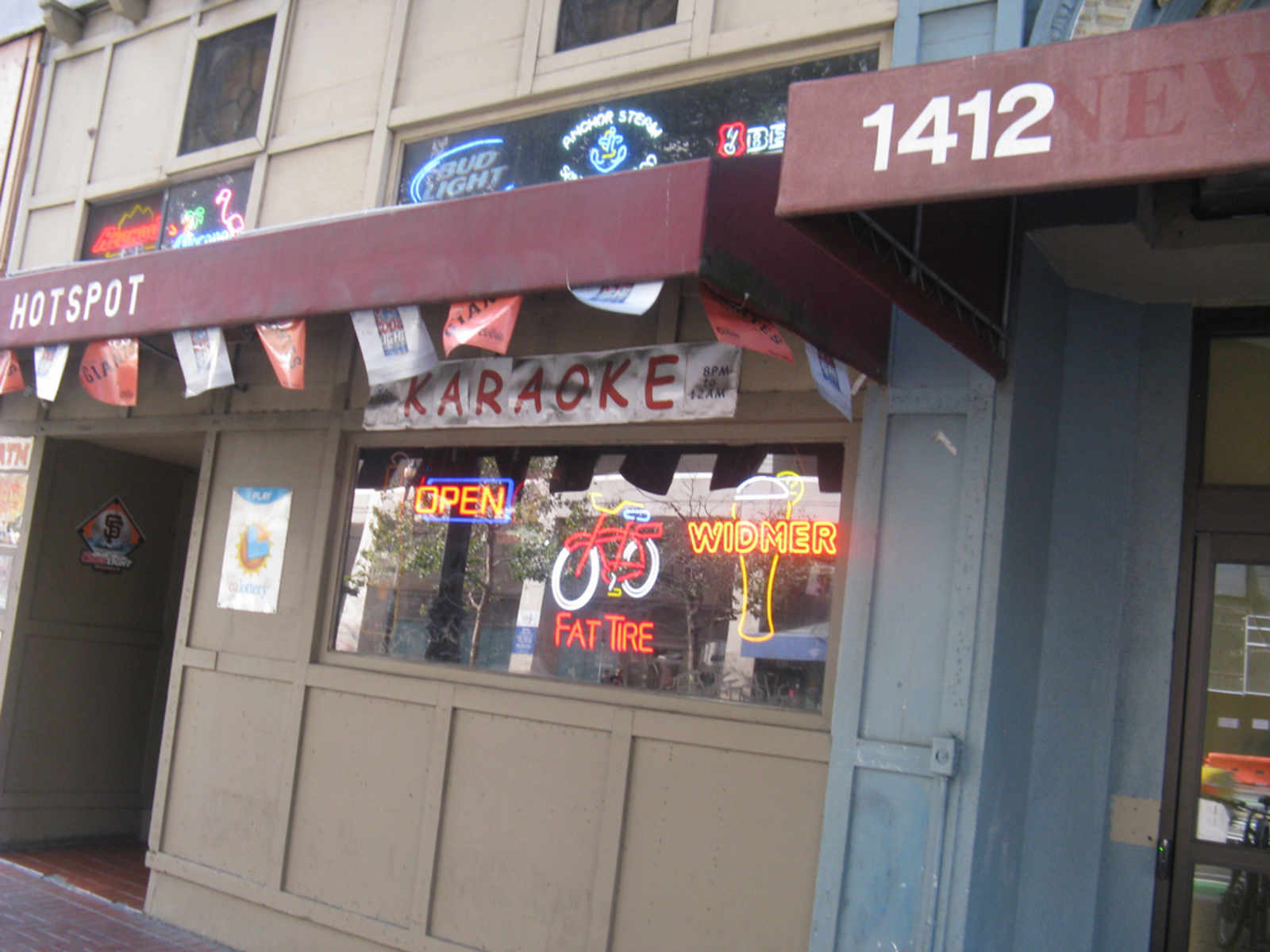 The Hot Spot was always the kind of place that every dive-themed bar aspires to be: filled with folks from every walk of life, all stuffed between delightfully downtrodden walls, and with Hungry Man dinners on the menu.  It remains the only bar on the planet I’ve walked out of with more money than I walked in with, only because every round came with a free scratcher and occasionally those fuckers choose to pay out.  Undoubtably The Hot Spot should have been a local’s haunt in some Red State backwater yet, miraculously, it was spitting distance from San Francisco’s City Hall.

Despite its perfection, The Hot Spot closed in January for a few weeks worth for renovations.  But then the bar found itself completely gutted, the weeks became months, and then the staff dropped this bomb on Facebook:

To our Hotspot patrons, our reopening date is now cancelled due to legal action that we have with our slumlord. The bar is not functional and we will not know when or how long before we can reopen.

With that, yet another one of SF’s prized dives has gone under the knife, never to return.  But fortunately for us, the ever-funny Ivy McNally shares with us this piece remembering her preferred neighborhood haunt:

San Francisco remains chockablock full of dive bars, but nuh-uh, not anywhere near my neck of the woods — the desolate, windswept no man’s land between Civic Center and Hayes Valley. You know what I’m talking about: Mid-Market. The “Twitterverse.” My home stretch for nigh on five years now, all that time dangerously nearing the precipice of becoming an uncool place to live.

(Is it becoming uncool specifically because I live there? Possibly! I once wore a construction paper mustache to the premiere of Anchorman and NOW LOOK WHERE WE ARE.)

Well guess what dummies, it finally happened. Venerable despite being virtually unknown, The Hot Spot has disappeared from those lonely blocks in between the Sort of OK Walgreens and Pretty Scary Walgreens. It follows Marlena’s’ and the Buck Tavern’s departure, leaving me bereft of establishments within stumbling distance from my apartment where I can read and drink alone surrounded by men over age 45.

Where am I supposed to go now? The library??

What initially attracted me to this otherwise intimidating dive was a very poorly attended Thursday night karaoke party. Is there anything better on this earth than a poorly attended karaoke party? Not if you’re as arrogant and anti-social as my friends are! If you haven’t had the pleasure of hearing your voice mingle with those of the Honda dealership car wash crew to create soothing background music for lonely old people to get drunk to, then frankly I just feel sorry for you.

It should also be said that in a city so reverential of karaoke jockeys, KJ Eve is criminally underrated. In addition to absolutely nailing Kate Bush’s “Running Up That Hill” every single week, KJ Eve is also a paralegal and a medical illustrator, with a robust crochet bikini business on the side. I do miss her so.

Also missed and worthy of mention: Adorable bartenders Michelle and Amanda, who always remembered my name even though I was usually far too drunk to remember theirs. Over the years, I saw a lot of cute girls crack under the pressure of daily 86ing dentally-disadvantaged patrons who reminded them perhaps a bit too much of their folks back home — but never those two. Those gals are tough and they taught me things about Jello shots I never even dreamed I wanted know.

If you never had a chance to visit the Hot Spot, I think you should know — although I almost hesitate to tell you because it’s so depressing now knowing its fate — but Hot Spot was home to the only Drinko game I’ve ever seen off the Isle of Alameda. If you are unfamiliar with Drinko, it’s simply Plinko, but with shots in place of cash prizes. If you are unfamiliar with Plinko, you have way bigger problems than the Hot Spot having closed.

Being somewhat isolated, the Hot Spot’s clientele were mostly regulars and the whole place had a rec room vibe, if for some reason your parents had painted the rec room to match the hue of a prostitute’s favorite eyeshadow. It had MegaTouch. It had three TVs, two of which were typically airing UFC press conferences. It had a pool table upstairs that I actually only saw twice; one of those times I was just up there making out with a guy from OkCupid. Days later, I realized there was a small closed circuit television behind the bar playing the whole mess, but I guess it probably wasn’t that big of deal because what do Amanda and Michelle care? THEY’VE SEEN WORSE AND MUCH WORSE!

As an institution, the bar served as an excellent barometer of character. If a boyfriend didn’t like the Hot Spot, it probably meant he was too good for me. And if a boyfriend loved the Hot Spot, it probably meant he was going to fuck a stripper while we were dating. Why do I choose to love things I know will hurt me, such as deserted dive bars that are destined to shutter? Probably because it took me 18 minutes to write an obituary for my mother, but this one has taken two hours.

To conclude, while we can never know exactly why The Hot Spot closed its doors, we do know it will be missed by many. And what we will miss most of all is…

The Hot Spot Special: Any well shot, any bottled domestic beer, and a lotto scratcher for $5.

FIVE DOLLARS. That my friends was the last great deal this city will ever see, and I seriously doubt Alta CA has plans to replicate it despite me tweeting it at them repeatedly.

I’ve been here a couple of times, the bar was ok.  Clientelle was whatever.  Let’s not pretend that every single dive bar was amazing.  I mean granted, there probably won’t be any new dive bars being built.  But we’re far from the no-dive bar reality that people like to scare us with.

We’re pretty damn close- name five dive bars and if you include the 500 or Clooney’s you need to recalibrate. Neither of those are dive bars.

If it’s amazing to me, it doesn’t matter what you think.

Phone Booth, Clooneys, Benders, Mission Bar, Pops (eh the new one might be also).  Those are all within a short foot distance of my apartment.

Tons of other candidates though.

Cloonies? Where they serve a beef tongue sandwich is not a dive bar. Bars with kitchens aren’t dive bars just because the occasional poor person goes in there. Benders, not a dive bar. Just because a bar has graf stickers and young college educated people who don’t shower, doesn’t make it a dive bar.

Dive bars are what Clooney’s used to be. Ignored spaces where drunks can drink in peace starting early and ending late. Not places that serve vegan food and have multiple pool tables with all their balls and functioning cues. That’s style. Dive bar chic.

Mission Bar.. sure. Phone Booth. For sure.

I bet you’re a treat to drink with.

Clooney’s is a dive by every definition of the word, even with the foodie kitchen.

Silly point to argue to be sure, but I have to lean in the direction of Clooney’s being a dive bar in transition away from a dive. It used to be a real, first call at 6 am kinda dive bar, but maybe not so much anymore.

But whatever, its still an honest drinking place. I’ve never eaten the food.

This shall forever continue to be a point of contention, apparently.

Yea yea, all true scotsman and such

I walk passed there M-F. They had some weird food thing that popped up (not as in “pop up”) with a sign and stuff but it was gone pretty quick. Not sure what that was about. And I’m not surprised to hear this. With that Alta CA place next door and the NEMA across the road, this place was on borrowed time. Speaking of Alta, does anyone else think the outside looks like it wasn’t finished? If that’s the look they’re going for, it’s not a good look.

that $5 (pbr, well shot, lottery ticket) deal was so fucking awesome. when i was there in december and i saw the sign that they were remodeling, i was so bummed. i wonder who’s going to be in charge of their awesome “cocktail program” when they open. bummer.

yeah, that deal was the best.  i can remember walking away from this place hammered so many times, like the perfect stopover bar between the mission and my home bar of nite cap (also defunct).

you will be missed, hot shot.

defnite bummer but i can’t say its unexpected.  an eyesore for the NEMA folk, im sure.

I could list some real dive bars but I don’t want to ruin them.

Great write-up from Ivy McNally. As soon as Mid-Market had a name, I was almost surprised every time I biked by and saw the Hot Spot open. For some reason, I likened it to Sutter Station, but never got to go inside, alack…