Pop's Bar on the Chopping Block 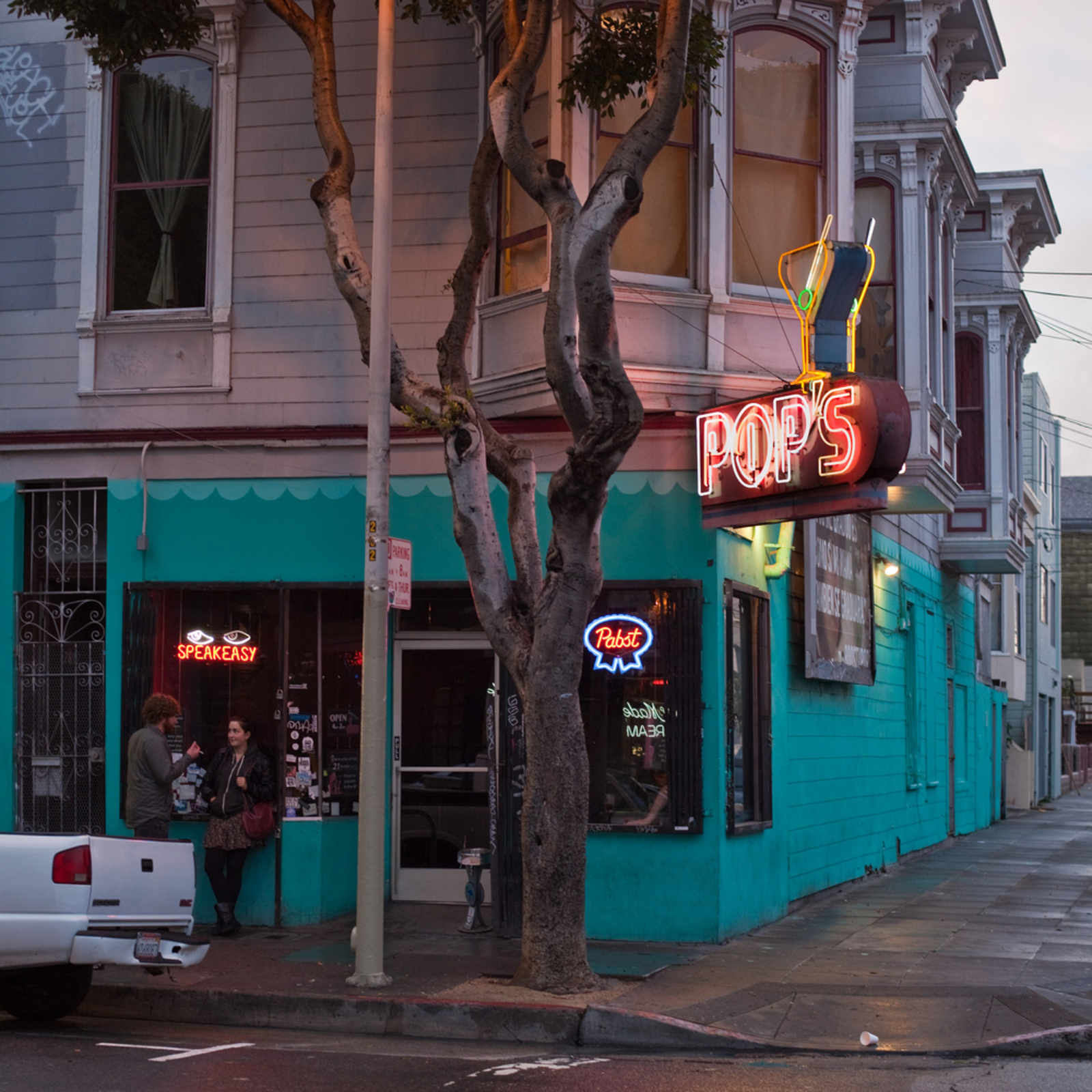 Pop's at 24th & York is in the process of being sold. The two current owners, Malia (owner of Thee Parkside) & Harmony, have accepted an offer and it's making it's way through the SF system. You'll have to follow up with them for details other than the rumor was it went for 250K+. Let's hope not to the douche who claims everything 'local' or some other dick who wants to clean it up and rebrand it for the Marina crowd.

We reached out to bar staff, but haven't been given a confirmation either way (and nothing has popped up on the bar's ABC license, so it hasn't made it that far yet).

The identity of the buyer (or buyers) isn't clear, but with the Mission's “hyper gentrification” looming over 24th Street, and Pop's being a place of $2 tallcans and $5 bloodies that start pouring at noon, we'd imagine the new owners would look to make the cocktail glass atop the sign a bit more prominent.

I wish I better understood the Mission liquor license moratorium. Between this and the liquor store being sold to the “Local” group, I’m confused. I thought the moratorium basically sealed in non-transferable amber any liquor license. I thought new places/changes were only possible if they had kitchens.

I’m confused about this also.

I always thought the reason there were so many shoddy corner stores on 24th St (there is one on 4 consecutive blocks between Shotwell and Treat) is because those guys couldn’t sell their licenses. Is that not true?

Some of those restaurants can go too.

That La Espiga De Oro is an abomination.

I went there after reading some rave reviews.

The chicharron burrito there was giving stiff competition to the late night grub at Del Taco.

The tamales were dried out and devoid of any real flavor.

I’d be happy to see a Five Guys open there any time. Those salty peanuts in the shell are killer.

Their chicharrones are fantastic and their tortilla chips are some of the best I’ve had in the city.

The local group/liquor store thing is still up in the air, I believe. A group of folks (including myself) have signed a petition to try and make sure they don’t get it.

Hope they don’t get rid of that iconic sign.

I live a block away, this is beyond sad. I may actually move to a different part of the city over this if some trick dog like establishment moves in.

RIP TO THE MISSION

^Got 86’ed for taking a swing at the jukebox.

Why do I get the feeling all the regulars feel like they got evicted from their “bar”? Bunch of fucking idiots.

I hope they build a puffy jacket foot massage emporium that only serves $12 Bellinis. Deal with it.

The State not the municipality controls and regulates liquor licenses and they are owned by the individual (i.e. they are not bound to any specific property) and can be sold as the owner(s) see fit as long as the purchasing entity can pass a background check. What the municipality can control is the approved use of various spaces via zoning. So, if a place is a bar that is usually a good sign that that is an approved use and therefore whomever purchases the liquor license shouldn’t have a problem continuing to operate as a bar at the present location. If it was however, an existing non compliant business with an approved variance and that status is subject to review upon the sale of the business then a bar might not be possible. I’m guessing that a bar is an approved use in this space and that the purchaser might have to upgrade the facilities to meet current building codes such as the ADA.

Can expand on this:
“If it was however, an existing non compliant business with an approved variance and that status is subject to review upon the sale of the business then a bar might not be possible. “

Does that mean that all the crappy little corner stores on 24th aren’t selling their licenses because their space is NOT zoned for liquor, but they’re grandfathered in? So that if they sold to someone, that same storefront wouldn’t be able to be used for serving any alcohol?

If so that’s a real shame. We definitely don’t need any more liquor stores along 24th, but we could do with another bar or two.

It’s a good thing I got too old to go out drinking until I blackout all the time, otherwise this would really harsh my mellow, instead of just bumming me out.

Too black and too poor and too cranky for the Mission so I moved to Oakland, then Bed Stuy and now I feel like everything’s changing and I’m sounding like my grandfather who used to walk to school — 3 miles — in the snow.

My feet are really cold and sad. RIP Le Mission.

I kno U. Come back to here.

this place smells like poop. not exactly the most disappointing loss.

Agreed .POOPS . My only concern is , with all the crab vending machines and burnout never wuzzez not havin a place to get shit faced … Where the hell are they going to go ? That place should have been shut down long ago due to methane gas from all the coke farts . Toxic . looks like the Treat st. bar just got a whole new crop of buffoons to guzzle PBR and brag about tattoos . The only redeeming quality that place has is that techies can’t go to there .

I NO FIT IN, I NO HAVE FRIENDS. If you think that’s a smelly bar, you def don’t belong in the mission

So many haters. Pops rules!

The people there are mostly white vermin transplants.

They can go drink in Excelsior and whiten that hood up a bit.

“Let’s hope not to the douche who claims everything ‘local’ or some other dick who wants to clean it up and rebrand it for the Marina crowd.”

What an immature position, more of the us versus them, high school mentality so prevalent among the self-proclaimed hip. You write as if this place is a pillar of the community and somehow you’re the victim of an unnamed injustice. Attacking every business you happen to not want in this city while promoting more bars and establishments you’ve deemed acceptable makes you look like a sophomoric shill. Then again, something tells me that’s the look you’re going for…

Par for the course. Is this your first day here?

FWIW, I sat on this for two weeks while I did my best to verify it. I’m confident in the validity of the tip.

Everyone is bitching about the demise of places like this…and I am among them. That being said, businesses like this rely on a customer base to keep the doors open. The people whining about Pop’s changing owners are the same people who would have a tantrum if their high lifes went up in price by $.50…again, I am among this group. At the end of the day, we are just as much to blame when service-based businesses have to go this route. Man up, folks.

The Attic AND Pop’s? Fuck it, I’m just going to start drinking on the street. Who’s with me?

I heard a rumor about The Attic being sold but couldn’t get anything about it. Email me? kevin@uptownalmanac.com

I know a couple of the bartenders. They confirmed it. I like the attic but the building srsly needs to be demolished. Even the staff hate it, it’s falling apart. Bummed to lose a bar that plays Sharnado but the place ALWAYS smells like the toilet is backed up. Because it is.

Glad that mop room is on the block too.

I really wish a nice low-profile neighborhood joint run by mature restaurateurs opens up there.

Been doing that for decades. Pissing there too. What? This ain’t Amsterdamnit.

I remember when Pops 2.0 was the gentrifier and that corner and Pops 1.0 had a hispanic clientele. Fixies and skinny jeans are not such a great loss. Anyone remember the Caribbean Zone under the highway at Minna, with a DC10 above the bar with cocktail tables? Now that Dive I miss.

The Caribbean Zone! With the surf videos showing in screens embedded in the plane windows. And the rumor that the plane used to be the Doobie Brothers tour plane. I so loved that place.