Omer Travers Has Left the Building 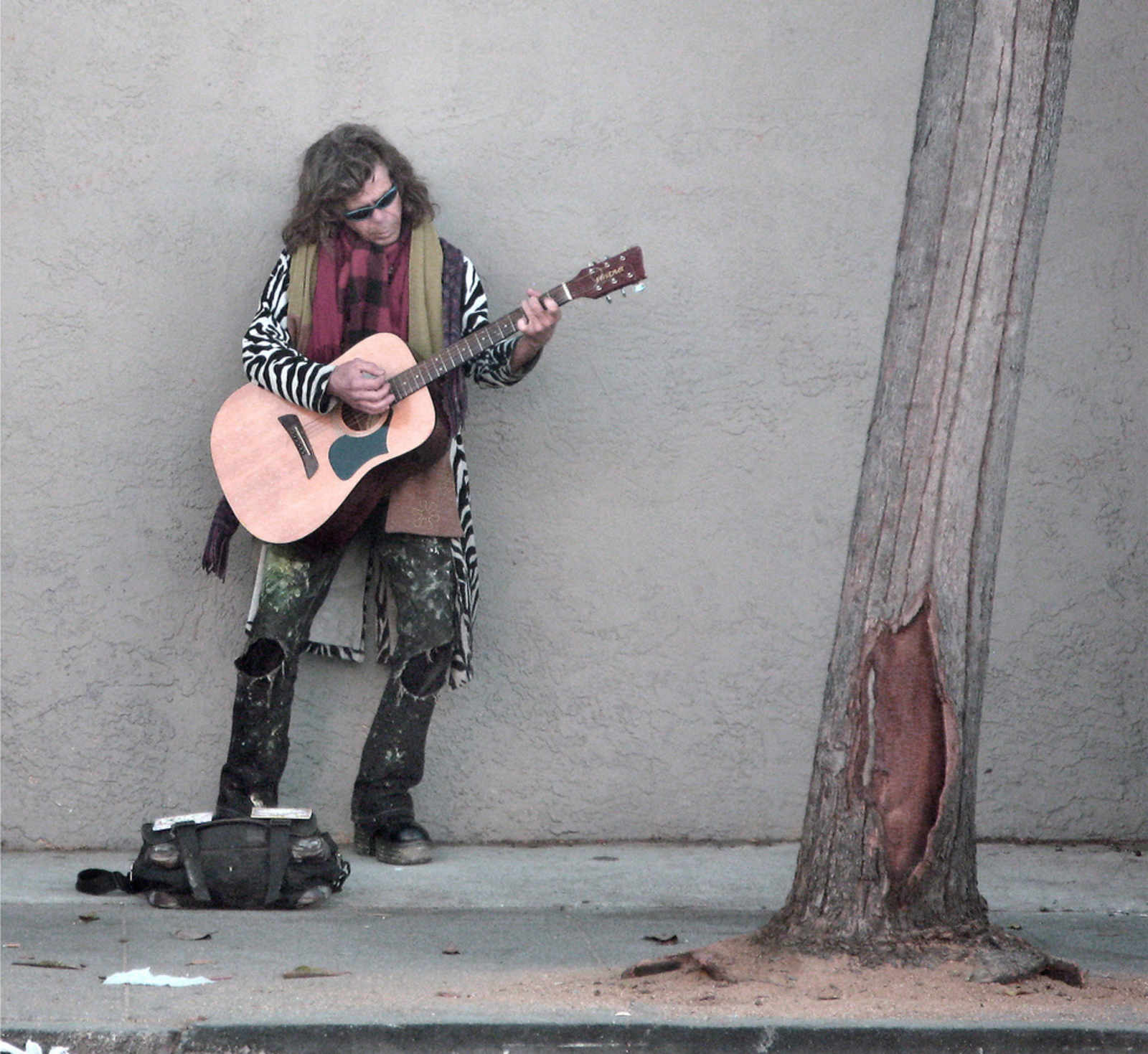 It seems Omer Travers, a.k.a. Bum Jovi, one of the last of the Valencia Street Eccentrics, has finally pushed off.  Your editor hasn't seen him slashing his weathered guitar outside a sex shop in months, and our friends have noted his absence as well.  Now his Facebook profile (which features an amazing Omer selfie) says he's living in Arizona.

Some will probably cheer his departure—to say he was a controversial figure would be underselling his 20+ howling years in the neighborhood.  His litany of Yelp reviews says it all:

“Racist. Dirty. Batshit crazy. Terrible guitar player. Snazzy glam rock fashion sense. Striking resemblance to David Johansen. There are few people left on this earth who posses even even a handful of these qualities, even fewer who REALLY don't care what you think about it.” - Jason X.

“My most recent interaction with Omer was two nights ago when at 3-FUCKING-AM I had to stick my head out of my bedroom window and tell him to shut the hell up & stop yelling because I - along with most of the other normal people in the neighborhood - was sleeping & had to get up for work the next morning. The “hipster” Omer's response? He gave me the finger the continued yelling and carrying on…” - Kate K.

“He looks just like William H. Macy, except he has a mullet and dresses like a gypsy commando.” - Steven C.

“I work at a cafe and he's constantly coming in to yell briefly and leave.  All you gotta do is yell back at him.  Usually i just yell, “DAD?!” and it smoothes things over with the ruffled customers and he gets embarrassed and scampers off.” - Gavbo O.

“Dear Omer (aka Bum Jovi), I'm waiting for the gentrification fairy to turn you into a parklet.” - EDW Lynch.

But I prefer his most recent review:

Aha! So that’s why rents have recently jumped.

He “serenaded” my apt for years when I lived on 22nd & Valencia.

We called him Bi-Polar Elvis.

I USED TO DRINK BEERS WITH HIM AND TALK ABOUT HOW HE BEAT CANCER. GUY RULED. ALSO THEN WE’D DO A LOT OF HEROIN.

Aw this makes me kinda sad. I worked on Valencia for a long time, and have had many a conversation with Omar. He liked to “harass the natives”, and often would fuck with people just for the sake of fucking with them, which was entertaining to watch when he wasn’t being racist/homophoic towards them.

We used to call him “Knock knock” cause he’d scream knock knock jokes into the front door our my workplace every time he walked by. He also claimed he cured the cancer he had once upon a time by eating fruits and vegetables from Walgreens.

We once sang christmas songs on his terribly out of tune blue guitar. I once saw a cop car roll by him while he was poking his head into a taqueria and through the loud speaker, warned “Cut it out Omar”.

He was an artist and an icon and a crazy person. Whomp!

he was “caveman guitar player” to us.

Yep, we used to call him Captain Caveman. He would “warm up” below my window with a pint of vodka before rolling out the main stage of Valencia and 21st.

his album Democracy Is a good idea is a classic

I always thought he looked like the grown-up version of that feral kid from The Road Warrior.

RIP street musician. Though you sucked, you exercised your right to be an asshole. Kinda of a tribute to have hipsters complain about you in New TenderHip. I hope you are as hated and eventually glorified in Arizona. Drink lots of water.

i thought this was going to be an obituary. apparently, shoving off means a possible return. i hope not.

I have always loved Omer, but I’m glad he’s gone to the desert, reincarnation of John the Baptist that he is. He always sang what was blowing in the wind, but the wind that blowing through San Francisco right now is probably too harsh for even this weather beaten idiot savant.

He’s a classic. I was listening to his 3 CD box set last week. I miss him already. Fuck you yuppie scum who need to get up early. Go back to quiet Bushwick Brooklyn.

You should walk around at 5:30AM and see who is working. There are a lot of people that are not yuppies, just people who need jobs. Its funny, though, the lack of consideration for others and arrogance is a very yuppy trait. Perhaps this is why youre bitter- did Goldman reject you? I know your CD player would like to reject your shitty music jaggov

My favorite thing about NOT living on Valencia Street (besides the horrible new school douche bag invasion) anymore is NOT hearing Omer smash the roll down garage door across the street repeatedly yelling “NO PARKING” (which was spray painted on the door) at around 10:15 every single night. I am serious EVERY night. Omer is a person who needs help, an alcoholic, homophobic, racist who needs to deal with his shit. Good riddance. People tend to find him cool and funny for the wrong reasons.

Where in Arizona, I wonder? I’d bet Tucson.

Nope went to live with his mommie at 515 Gold st. Kingman az.  He couldn’t stay in SF cause he was being charged with assult of one of the tennents in his government provided apartment.  After moving here he took his anger out on my wife ( his sister ) and it still goes on.  SF you can have him back any time…

Just wish the dude had actually learned to play the guitar.

Homophobic, racist, who harrassed and made smoochy noises at any passing single women. I also heard him launch into an extended, profane tirade about how he “didn’t get any fuckin’ respect” in front of 2 small children. F that dude. So happy I gave him the double flip off salute the last time I saw him. Good Riddance

Sad to see him go, he was definitely a piece of local color.

twenty years ago he had a girlfriend and child following him around the mission. the kid’s probably all grown up now and occasionally i wonder …

That daughter is named Melody and has graduated college and is now teaching english in Germany ( she want’s to be far away from both her parents ).

Through the years I have wondered what happened to his daughter, Melody. Thank you for the update. She was a beautiful child.

One time this guy came in and sat next to me at the laundromat at 21st and Valencia. He asked if I wanted to hear a song – I had a minute left on the dryer so I said I did as long as it was under 1 minute. He then proceeded to belt out a 1-minute improvised song (guitar accompaniment included) about a frog on a lily pad, much to the dismay of everyone in the laundromat.

Dude was part of it - the IT that is mainly now burning alive in the Dotcom V.3’s undertow. You in your new Audis will never know what came before SF turned into an Artisinal version of a San Jose strip mall

“This is a carjacking. Give me your car. Except this isn’t a gun, and this isn’t Israel,” he said to me on my Vespa, stopped at a light, as he aimed his blue guitar.

I wonder WHERE in AZ exactly would one find Omar? I left behind the Wonderbread gentrification of the Mission for Tucson AZ and I would gladly love to welcome Omar to his new home, if he happens to be here.

well watch out fair UA readers, cuz i saw him chillaxin on 17th by Hoff last Monday night on the way back from BART so his faceybook might not be totally truthful/up-to-date……no fuckin way. dont let this thread die!