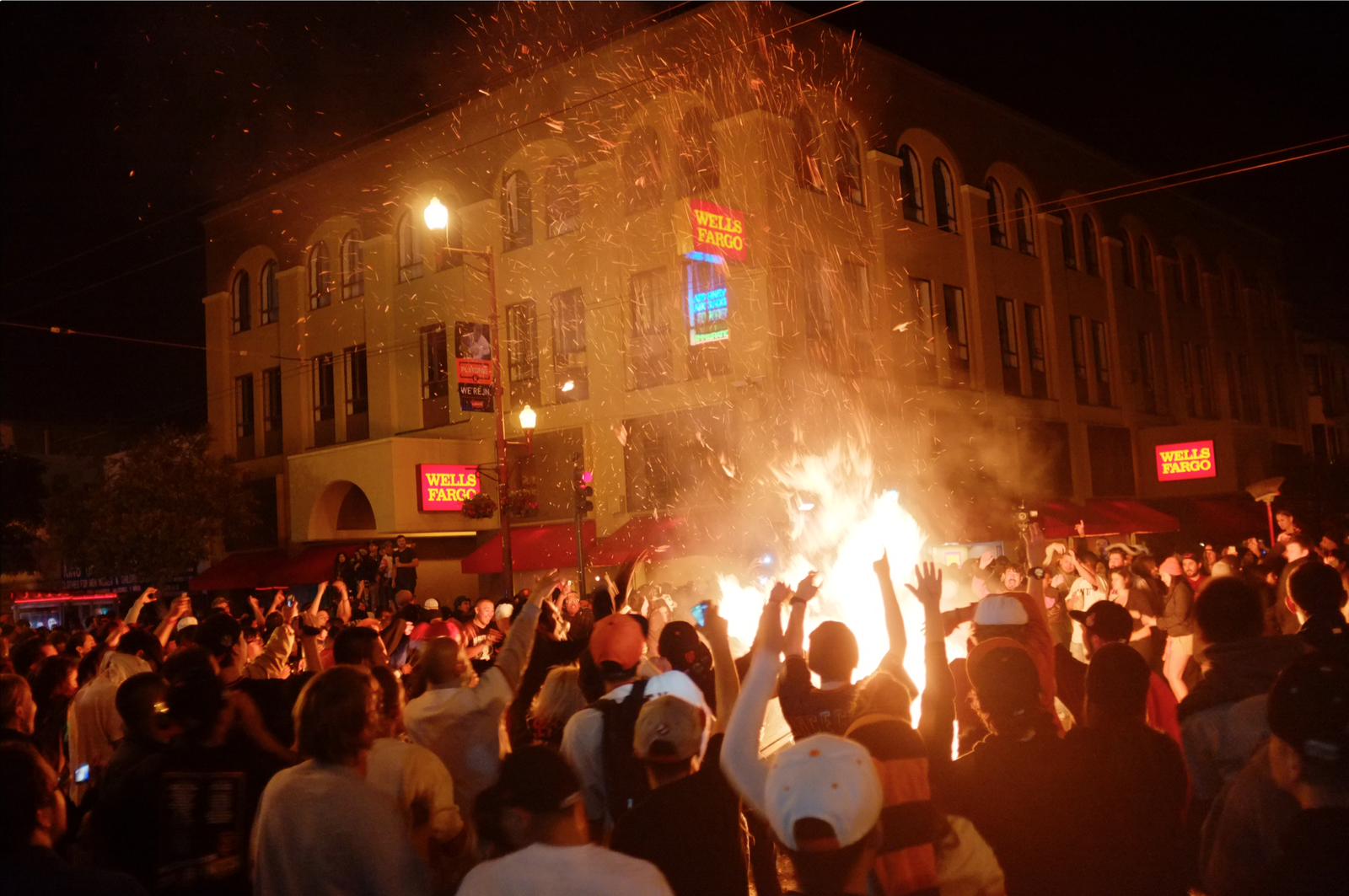 In an effort to cut down on the undeniably uncool vandalism that followed the Giants' crushing World Series victory, Mayor Ed Lee is 'going after booze' instead of 'tackling the culture of violence' that surrounds celebratory rioting.  The Chronicle fills us in:

The mayor said [last] Thursday that [this] week he and Police Chief Greg Suhr will tour neighborhoods hit by vandalism after the World Series and during Occupy Wall Street protests last year to offer support to business owners and “also to suggest that they serve something (other) than heavy alcohol during times of celebration, because that inebriation sometimes doesn’t help with people who want to maybe go beyond the bounds of acceptability in their celebration.”

In other words, take the booze out of the bro, maybe the bro won't torch your neighbor's compost bin outside of West of Pecos.

However, opt-in from local bars is purely voluntary, suggesting shots will be served well into hour three of Telecopter 4's continuous chaos coverage.  Or, as Adam DeMezza of 16th Street's Giordano Bro's pragmatically told the Chronicle, “it’s a good idea, but it’s going to be a tough sell.”

Tough sell, no doubt.  Considering every bar in the neighborhood will be packed full of folks feverishly drinking away shitty 2 Broke Girls commercials hours before kick-off, these places stand to lose lots of money by cutting-off their supply.  But this is the same strategy used by the city in 2007 when they were looking to dial back the whimsy (and, uhh, shootings) of Castro Halloween, and that effort saw empty streets and all but one bar closed.

Besides, it's good for business:

Lee noted that it was particularly important to keep the celebrations safe and respectful given that the San Francisco 49ers are making a bid to host the 2016 Super Bowl. That game would be played at the team's planned new Santa Clara stadium, however, and not in San Francisco.

So have a sober Sunday, folks. For Santa Clara.

They could try this thing called “putting people in jail who do bad things.” It’s a bit of a novel idea for the SFPD, but they should try it. Next, the DA should try thing called “prosecuting bad people who do bad things” and “punishment” instead of sitting around picking their noses. Again, a novel idea, but sure beats making Demon Rum the bad guy when in fact plenty of people did stupid shit during the Occupy and World Series messes who were entirely sober….

Has anyone asked Ed Lee if he’s aware the super bowl isn’t being held in SF?

What does that have to do with anything?

Isn’t it more than a little odd to take action against something occurring in another state? I mean, just because it’s snowing in Colorado doesn’t mean we put chains on our tires in SF.

Dude, you know that the San Francisco team is in the superbowl, right? The final game of the World Series wasn’t in San Francisco, either, but that didn’t stop the fucktards from being fucktarded in celebration of the win.

No He doesn’t know that…trolls comment on everything, and make arguments - even when they do not know what they are arguing for.

I was planning to leave the neighborhood for a Super Bowl party, but after the World Series bullshit, I’m scared to. I want to be here to be able to save some things if my block goes up in flames.

Just talked a few minutes ago to a local businessperson who said she was headed to a meeting at SFPD Mission Station, where they were going to discuss how to avoid chaos. Glad to know they’re thinking about it, but I fear the answer will be, per Ed Lee “shops and bars should sell less booze.” Won’t happen. I think a serious police presence is the only answer.

I have a feeling that if they win, the neighborhood is going to be much, much worse than either of the WS wins. But bars selling booze definitely won’t make a difference. You have to think that the bars can only hold so many people, and the folks watching inside their homes or at their friend’s Superbowl party have absolutely no limits.

But what the fuck is this “heavy alcohol”? Because I think I want some.

I have the same feeling: when the Niners win, it is going to get dangerous.

Uh-huh. Good luck with that.

A win or loss by the niners will lead to mayhem.