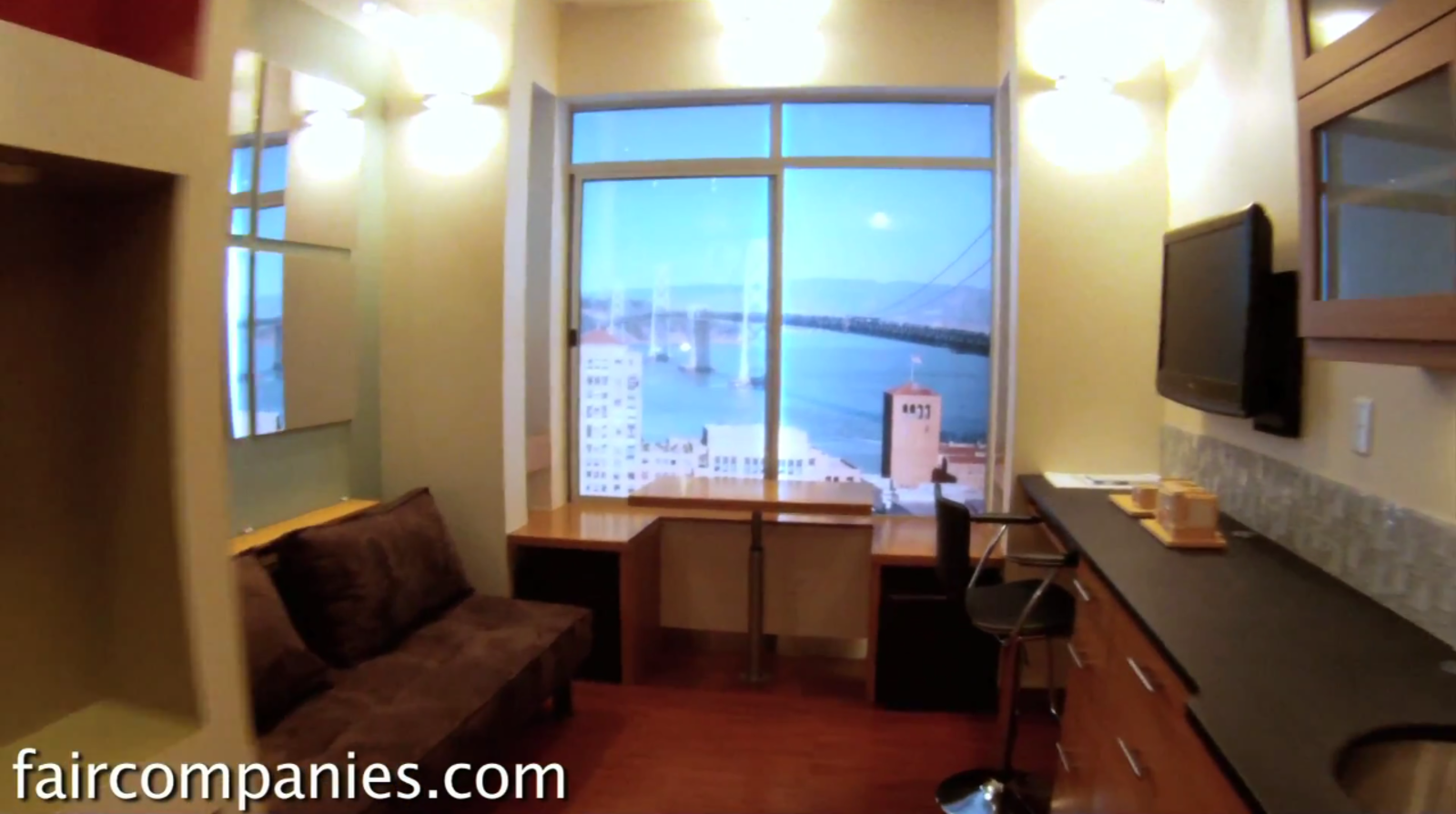 Searching for an apartment has been an increasing bummer in recent years, with average neighborhood rents increasing anywhere from 14 to 135% in the past year and landlords requiring prospective tenants to bid on apartments.  However, Supervisor Scott Wiener's proposal to amend the city’s building code to bring the smallest legal living space to just 150 square feet is just depressing.

The proposal, which the Board of Supervisors is scheduled to vote on tomorrow, is seen by Sup. Wiener as a “smart way” to deal with the city's housing shortage as our vacancy rates near 0%.

These “affordable by design” units are also being pushed by Patrick Kennedy, a Berkeley developer and owner of Panoramic Interests, who wants to build “broom closets in the South of Market area” for young techies to work in.  In an interview with the San Francisco Public Press, Kennedy spoke about how these Zynga slave quarters could help prevent the so-called “cannibalization of family housing”:

“There’s always going to be two to three young techies who can pay more than your average family,” Kennedy said. “When tech workers can’t find housing, they bid up the housing for everyone else.”

Kennedy took Fair Companies, a sustainable technology blog, for a tour through one of the trial units, which, as SF Public Press points out, is “a little larger than a standard San Francisco parking space.”

Of course, the reasoning doesn't quite add on up this one.  Why would “two or three young techies” all pulling in $80k each want to live in a wiener-sized dorm room?  Gail Gilman, executive director of the nonprofit developer Community Housing Partnership, isn't buying it either:

But Gilman said for-profit developers want to build smaller units mostly because it’s good for their business. Multifamily housing is less lucrative because there are fewer families that can afford to pay for large apartments at the rates landowners would like to charge per square foot.

Shame on Scott Wiener for initiating this BS.

The best way to catch a politico in a lie, ask him for a yes or no answer: Would you (Wiener) live in one?

Why is their a city ordinance on how small an apartment can be in the first place? If somebody wants to rent a tiny apartment, and somebody else wants to make it and rent it to them, why does the city care? Why make people rent and pay for more apartment than they otherwise would?

I can answer your question, as the significant other of someone who makes plenty of money yet lives in the Excelsior, has 4 roommates, and pays $700 a month: If you’re a “young techie” (well, we’re 38) living in an amazing city like SF without being saddled with kids, you don’t care that much about where you live because you’re not there very much. You’d rather save your generous paycheck for buying a condo outright, taking a year off to travel the world, etc. I definitely think there’s a market for this.

“There’s always going to be two to three young techies who can pay more than your average family,” until the bubble burst…as an advocate for SUSTAINABLE sized housing, we are big fans of Tumbleweed houses(less then 500sq ft) I have no problem with the size,after all,most SRO’s are less then this. However,it’s the fact that this small room would go for stupid amounts of cash..sure we will rent this unit…for maybe 400-500 a month.i’m sure they want 1500.

Also,as someone who lived in the V berth of a sailboat for more then 5 years, I have no problem with the size of the unit,my problem is with the fortune they want. and after watching the video,do u really want a drunk freind or kid sleeping next to that huge window?

If you’re the type of person who’s never home, I could see this making sense. At least it’s not a Japanese capsule hotel.

Discount the polititian-speak. Discount the “techies” reference. Discount the knee-jerk lefty appeal to the notion of people living in too-small spaces. I know people who are living in walk-in closets in Mission flats, right now, and pay almost as much as I do for a large half-flat.

This proposal could do something to fix that. There are people who don’t need an expensive loft or a multi-tenant flat or a crack hotel – and this could help.

Would the gargantuan sized Supervisor Wiener even fit in one of these shoe boxes?

I suppose he would be opposed to limiting the amount of rent being charged on these cells..because that would cramp the style of developers that give him money to be elected.

If techies want to live in one of these closet apartments, all the power to them, but let’s not pretend that these will free up the family housing for average families. It will just ensure that there are more techies living in the city, which is exactly what the city and Supervisor Wiener want.

I live in my cubicle anyway.

Tenements for the 21st century! Change we can believe in! Go Scott Weiner for proposing such a stupid idea. And props to this bullshit about how tech workers are pushing out the famblies! Kids! Gotta cater to the KIDS! Free Muni! Priority Boarding on Muni! Moar kissing up to KIDS….who don’t pay fucking taxes and are a pain in the ass in general. Don’t they realize part of the appeal of living in Sf is not having hoardes of New Year’s Eve mistakes swarming the park?

Wha? Shame? We need more housing the city and I think this is great. I would totally live in one if I didn’t have a cat. We need to act about the housing shortage.

You say it’s wrong and you wouldn’t want to live there. Yet plenty of SF newcomers in tech just want a place to sleep with high quality amenities, close to where they work. Your beautiful Edwardian flat in the Mission is actually a minus to them, because they have to furnish it and take BART in the morning. People live in college dorms for years, and for recent grads, these apartments would be a step up.

SF needs to get its head out of its collective ass about housing. We either need to build more places for people to live, or we need to accept skyrocketing rent and plummeting vacancies. There is no magical third option where rent comes down just because we wish it would.

Looks like you’re being picked up and not credited all over the place now including NPR http://blogs.kqed.org/newsfix/2012/07/10/could-you-live-in-an-apartment-…

I mean what else are we supposed to do? Continue with the status quo? At least this developer (SHOCKING SPOILER ALERT: Developer trying to make money!) is coming up with a solution albeit a small, but pervasive subset of the larger rental market. For single, fresh from college 20 somethings I think this is a viable, and attractive option. I feel like most of that demographic are moving frequently anyway. I think we should be supporting ideas like this. For a city that likes to pride itself on being open-minded, we sure do like to shoot down innovation. Especially anything coming from a *gasp* developer.

“Laws regulating the smallest permissable size of a dwelling—something like the rule against apartments smaller than 400 square feet in New York, or the very common rules in the suburbs mandating a minimum sized lot for a single-family home—are among the most straightword tools in the exclusionary zoning toolkit. The basic issue is that income-constrained individuals naturally make trade-offs among different virtues. You might get a larger dwelling with a longer commute. Or you might opt for a smaller dwelling with better local amenities. A rule against small homes prevents people with relatively modest incomes from making the trade-offs that would allow them to live in areas that the commute or the amenities makes desirable.”

I think the developer was pretty shortsighted in pitching this primarily toward young tech workers for the same reason.

I think an easier solution would be to allow free standing dwellings of similar size to be built in the backyards of existing homes. Sometimes we forget that there are significant yards in other neighborhoods and small cabin/tiny house/whatever you want to call it would not be a bad idea for families to build for extra rental income or to help out family members.