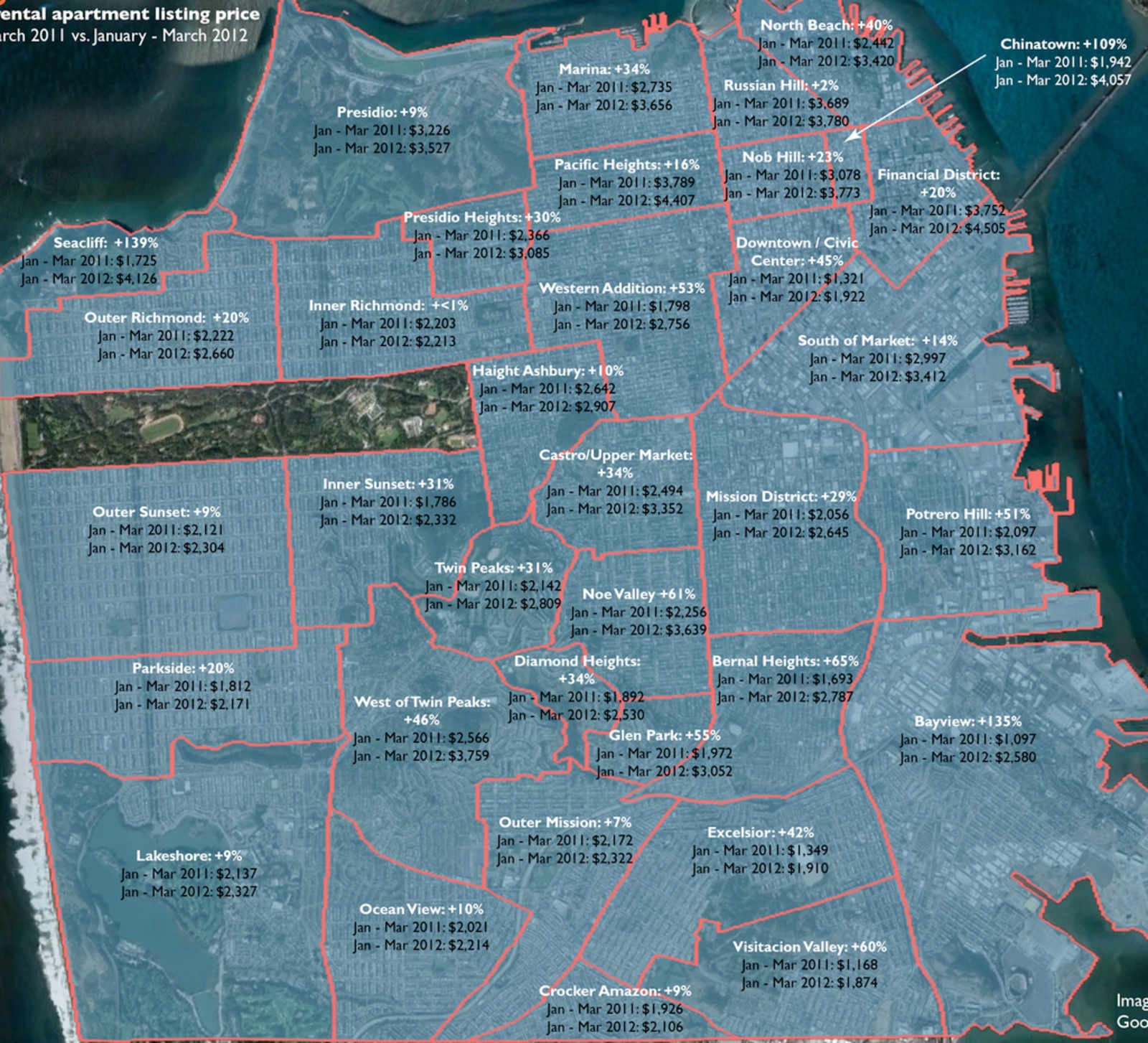 Perhaps not much of a surprise here, but it's still somewhat jarring to learn that in just one year (from Q1 2011 compared to Q1 2012), apartment rentals are up 29% in the Mission, 65% in Bernal, 53% in Western Addition, and up by double digits pretty much everywhere else.  This all is according to Lovely (in conjunction with CurbedSF), “a local apartment hunting site, [which] compiled the data using figures based on indexed apartment listings posted on Craigslist.”

It's also worth noting that the Mission is regaining its reputation as one of the “cheaper” (cough) “hip” (puke) neighborhoods: Bernal and Western Addition have all climbed ahead in average rental prices, Potrero Hill has soared past, and Bayview is hot on the Mission's tail.

I’m in Haight-Ashbury, and have been in the same apartment for over 2 years. Since moving in, the price for an apartment the same sq-footage as mine in the building has gone up more than $1k. When I see the new tenants move in, I immediately think they’re suckers for paying what they pay. However, I’ve spoken with other tenants in the building who have lived there for 10+ years, and they probably think I’m the biggest sucker for paying what I pay.

Bayview up 150% - I guess folks really want to live there?

What is this Q1 business? Or you turning into a financial blog or something?

If only they would build more high rises, we’d have a place to put all these people.

I’m so glad we’re giving tax incentives to businesses who are hiring new employees from outside the Bay Area.

I’d be interested in seeing a percentage increase timeline and comparison with the 90s tech boom.

Ugh! I’ve already asked dad if there are any promotions he can try for, and it’s too soon after Mother’s Day to talk to mom about her getting a part time job. But to be honest, I don’t know how they’re gonna be able to keep helping me with my rent. Fuck, I may have to start looking for a full-time job.
F.
M.
L.

Checked out a place in india basin over in Bayview a month ago. There were 14 other people there. I’m scared.

Huh. I wonder if people have finally started to realize that the Bayview has the best weather in the city?

Had to look at my checkbook before posting a comment: rent for my one bedroom in the Castro, with a garage, view of the bay, Oakland Hills, Mount Diablo, access to Muni……I know - I know, Muni :-(
Living room; 17’9” X 12’6”. Separate dining area too.

Anyone have an idea how a middle aged underachiever is going to support himself in this city in 10 years?

Build housing that will accommodate 10 young people sharing rent at a time so there are “tech” workers in town while rebuilding highway overpasses all over town giving the less qualified soon-to-be-seniors somewhere to call home (under the bridges).

The pink-slip parties will be fun. Anyone remember those? They will come eventually, count on it.

What people don’t realize is the reason why rents are so high is because of rent control. If there was no rent control rent would be much lower.

It’s all about CORPORATE landlord’s,qrtly profits and general bullshit.

Keep in mind these are average renting prices and it does not say if these apartments are studio, 1 bedroom, 2 bedroom, or 3 bedroom. It should be a cost per room to be more accurate.

Repeal rent control! I know it will never happen, but it’s the main culprit. Counter-intuitive as it may seem at first, rent control causes hording drives up prices. Who’s going to give up that $1000 2 bedroom in San Francisco? No one. This becomes even less likely as rents continue to skyrocket.

I encourage everyone to put aside their knee jerk reactions to save old people and artists, and read this study:

^^ says, Generational warfare is morally superior to class warfare. i.e. The folk on the age spectrum closer to death end should be thrown into the street so social media can grown exponentially faster.