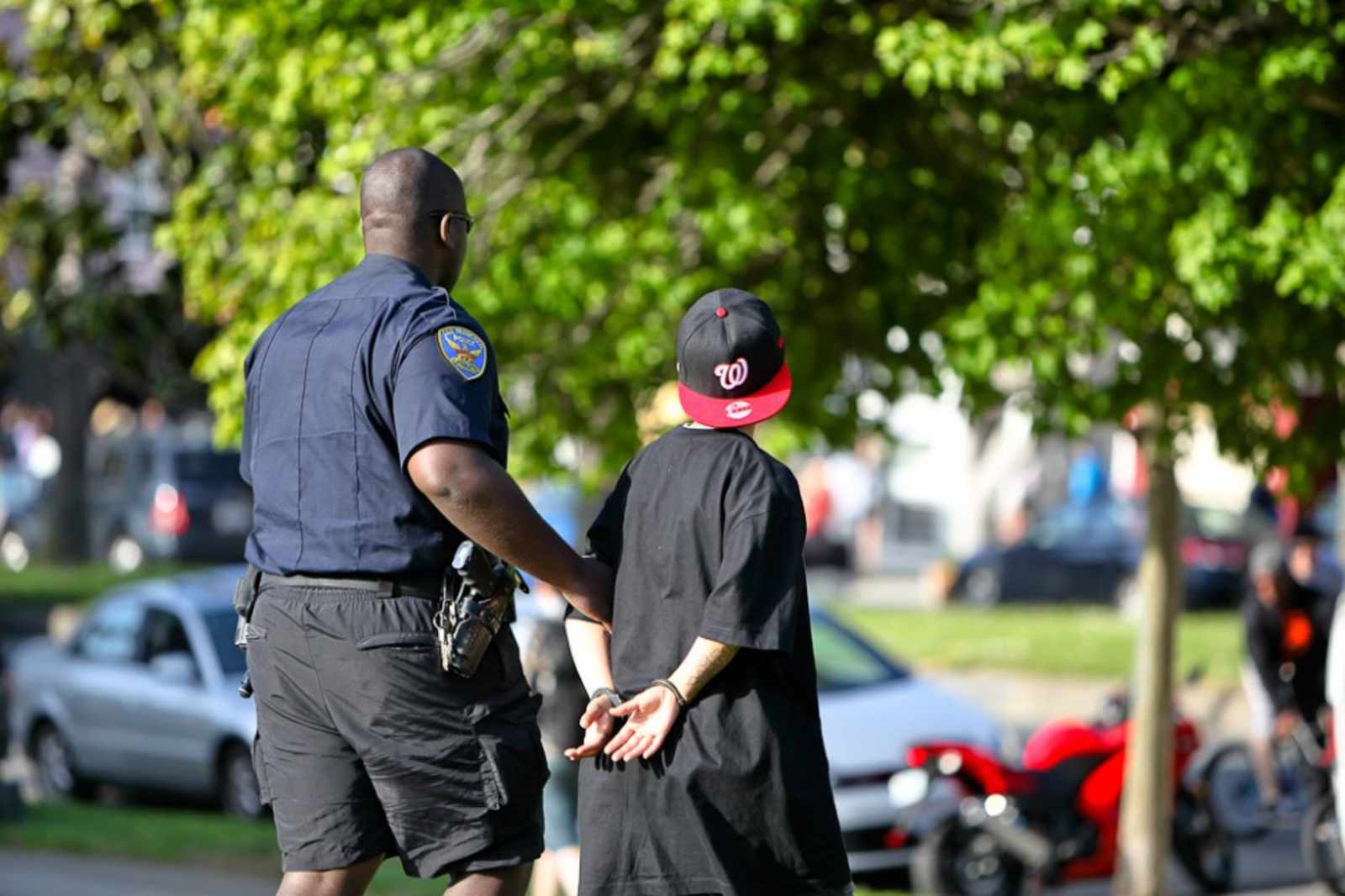 After a spring season of aggressive policing in Dolores Park (including at least 17 arrests, bothering folks for smoking and drinking, undercovers badgering lounging picnickers for heroin, and an alleged campaign to harass gay sunbathers), Dolores Park Works was able to get the word from Mission Station Captain Bob Moser at a community meeting as to what's going on:

Moser told the group he does not have the resources to completely eradicate alcohol from Dolores Park. He instead is focusing on enforcement of illegal alcohol sales, drug sales, public intoxication and underage drinking.

This subtly implies that the goal is to eventually “eradicate” alcohol from the Park, which obviously no substantial constituency is interested in.  But SFPD is making inroads on that situation regardless:

Starting at the end of April, Moser has increased police coverage in and around Dolores Park.  This involves radio squad cars, gang enforcement and plain clothes officers.  Captain Moser said he has directed all shifts of radio patrol cars to include Dolores Park and the surrounding neighborhoods in their patrols. In May, radio cars logged 413 “passing calls” or visits.  Success from this increased enforcement operation includes gang officers spotting and arresting known gang members, plainclothes officers making buys and issuing citations for the sale of psylocibe mushrooms, pot, Jello shots and beer.  Plain clothes officers are also being sent into the park at night and extra officers are patrolling the park during peak weekends and issuing tickets for keggers that “get little bit out of control,” Moser said.  On the perimeter of the park, officers have made arrests for public urination and auto burglary.

Keggers?  Well, in all the countless afternoons I've squandered in Dolores, I've never once seen or heard of anyone hauling a barrel of brew in the park.  But, hey, I guess it's possible that multiple keggers just spontaneously started happening over the last few weeks.

Anyway, the city's park rangers report that they are also in the midst of stepping up their patrols in the park, stating that their priorities are shutting down loud late parties, “underage drinking, tents, drug and alcohol sales and illegal venders.”

[Pic by Prolly Is Not Probably]

Got to worry about this plan aimed to stop keggers. Is that a reread of the invade Iraq justification?

It’s part of the whole brogrammers trend. Bros kickin’ back with their red Solo cups, crankin’ up the LMFAO. Soon it will be EVERYWHERE.

I’m glad they rid the 16th BART plaza of public intoxication before moving on to this!

I’ve seen keggers there. I’ve participated in keggers there! Anyway, this is nothing new. We were harassed by police on the 4th of July 2008, they knocked Solo cups out of our hands, took bottles of beer and dumped them out and made us pack up and leave. We also were threatened with citations for having a grill. We didn’t know alcohol and grills were an issue, but would certainly have more willingly complied had we been given a warning. We have since moved our gatherings elsewhere.

These days, Dolores Park is more littered with trash than a city dump.

I wish that the cops would focus on issuing tickets for littering.

Go back to your own neighborhoods and leave your trash there, please.

um, many of the people who work for park and rec are there specifically to clean. not holding horticulture degrees. those would be the gardners and you’ll always see them doing maintenance on the sprinklers, etc. verified by the fact that I used to do many projects with the various DP gardening, cleaning and painting crews last year.

You need a hug

That is such a bullshit justification for littering.

It is not just recycling. People throw their leftover food waste on the ground. And it is mostly in the hipster plot park of Dolores Park.

There are trash and recycling bins in the park. The “bums” can fish through stuff there. What is the problem with properly disposing of waste. It is a public park, respect it so others can enjoy it.

This is such a basic, blatant, old tactic! How stupid do they think we are? Clearly they are using this “crack-down” to increase their arrest stats, to make it look like they actually do something and aren’t just a bunch of fatty-fat-fat donut eaters, without having to do any actual police work. God forbid they should address any of the myriad of real law enforcement problems that blight this city! Yes, policing is difficult work, but so are lots of other jobs. We pay for this crap both in our tax $$ and in the negligent lack of proper policing in the areas that need it. *bashes table with fist in pointless display of anger*

Have you seen the bathrooms in the park? You wait 20 minutes to stand ankle-deep in raw sewage. It’s not worth drinking there.

The round up of gang members often happens each year about this time.

32 homicides in sf this year as of yesterday and sfpd wants to dick around with drinking in the park?

i don’t wish for anyone to die, but if #33 was a noe nimby, i’d suspect that drinking in the park wouldn’t be such a big deal anymore.

If you break laws don’t cry about getting busted.

Well asshole, I drink and smoke in DP knowing it’s illegal, if I get a ticket I won’t cry about.

Me, I think they should arrest people for breaking the off leash dog laws, and allow the people to break the open container laws. But others think the opposite enforcement priorities.

I frequently go to the park and chill out there, drink and smoke. This is a stupid tactic to harass people who are having a good time, why are they wasting their time on this when they barely turn their heads when someone lights up a joint or pipe smoking pot? Are they that hard up to fill their quota for arrests? I pick up after myself like an adult, they should treat us like adults. Most of the people I see in the park usually pick up after themselves, there are probably people who leave their garbage sure, but there are people who pick up to recycle it afterwards. I don’t see a point in harassing people there about open container laws, if you go to other parks most people don’t follow them either. Not sure why Dolores Park has become such a target for this kind of tactic, probably because it’s really nice out and more young people are flocking to it. Therefore, there is police scrutiny about it because they like to kill the fun before it gets out of hand. Which so far it hasn’t escalated into any fistfights or gang violence. So what is the deal REALLY?

There was a shooting on 16th and Albion…hello? There is some bad stuff going on on 16th Street and they’re focusing on people hanging out in Dolores park. That is stupid.

The increased police presence is there because of the new kids playground. I imagine some parents have been complaining, and the city is responding.

The Playground really has nothing to do with it. And since when do hipsters do Heroin? I Was told the other day by the Undo who arrested my friend that they are only busting sales and such Under captains orders. They turn An eye to drinking mostly unless its night time. Bullshit tactics its almost another GG Park Circa three years ago. People are going to continue to Hang out at DP Regardless. Go back to Squad patrolling down in the Late teens and 20s There is much worse shit you could be observing down there.

Maybe if they hosed all the human scum out of Dolores Park it would be a nice place to visit, but the stench of weed, stale beer and piss pervades. The toilets are festering dens of sewage - all kinds.

I wouldn’t bring kids there for a picnic in case some drug-addled bum or hippy tried to sell them drugs!

How hard is it to enjoy nature without becoming stoned or intoxicated? How out of touch with your own humanity are you that you cannot enjoy the simple joys without pouring filth into your bodies and leaving your garbage all over the streets?

Can they start foot patrolling the Tenderloin instead, PLEASE? I feel so unsafe walking home from Civic Center BART/Muni up Leavenworth, Hyde, or Larkin. Much more open crimes there than in D.P.

Besides the fact that I love drinking Wellers Bourbon, this whole up is down…..down is up, shite ,has to cease and desist. What are we just dust in the wind? A bunch of ramblers eating cotton candy at the footsteps of purging mothers milk? Might I wipe my brow grin while I sip from her plunder, over yonder the well wishes seem to hide my creations…..Good lawd! Have I just libeled myself?