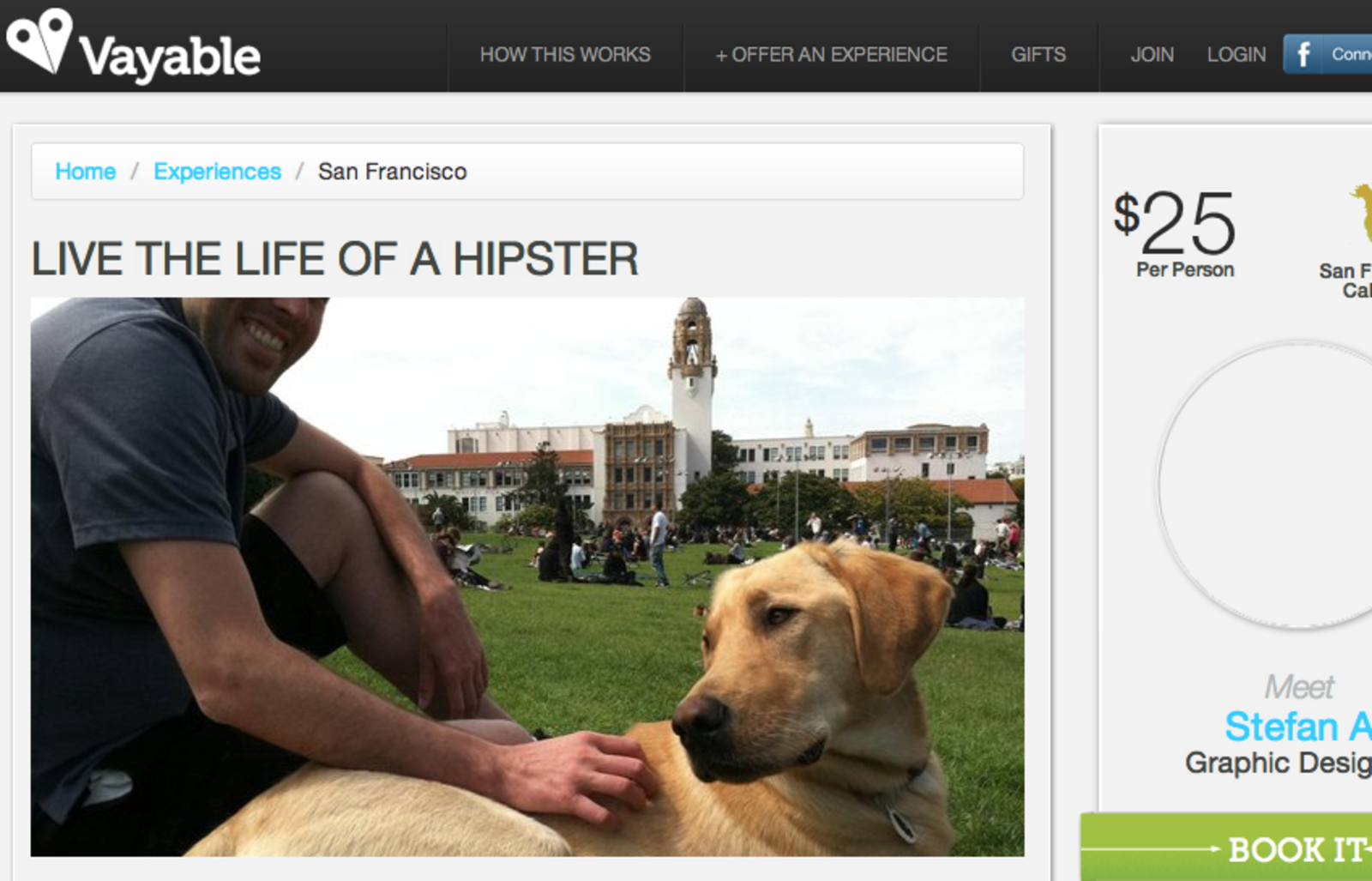 We've heard about Vayable before—you know, the 'travel experiences' website that enables enterprising Joe Somebodys to offer supposedly authentic tours of their locales.  We've seen 'em in action before, first with a tour of Tenderloin homelessness and then again with a $30 wine and cheese insult picnic in Dolores Park.  What fun!

It seems Vayable is still in business and there's a new (!!!) tour of Dolores Park: a $25 dollar per-person journey into “The Life of a Hipster.”  That's right, noted graphic designer “Stefan” will show you the PBR-soaked ropes of Dolores Park culture, even offering to give you a pair of knock-off Wayfarers to complete your afternoon.

The thing is, I don't trust these tour guides.  Anyone offering to give a tour of the park immediately calls the legitimacy of said tour into suspicion.  Just look at that picture: not only does that dog not have any tats, but that guy's shorts aren't jorts.  And you expect this to be a genuine tour of hipster culture?

2:26pm - I take a seat on the grass, noting that “I don't think I want to start drinking yet” and “I've been trying to take it easy lately.”  Everyone nods in agreement.

2:29pm - Cold Beer, Cold Water walks by, serenading us with his siren song one for three, two for five.

2:42pm - Speculate that none of our friends are in the park yet because “it's too fucking early” and express surprise that we're even up ourselves.

2:48pm - Everyone collectively glares in the general direction of a growing drum circle.

3:00pm - iPhones begin to buzz with requests for “brunch?”

3:17pm - Huddle together and devise a plan to hide from the girl you fucked last week that's walking towards our group.

3:31pm - Complain that “the weed truffle dude” hasn't been in the park allllll day.

3:32pm - Friends begin to trickle into the park.  They brought beer and it's Modelo Especial.  Assholes.

3:34pm - Reprimand a neighboring park-goer for listening to Cut Copy over iPhone speakers. I mean, really?

3:49pm - Attempt to hit on cute girl in a tattered Black Sabbath t-shirt by remarking how much better English rock was in the 1970s.  After being completely ignored, walk away hoping no one sees you.

3:58pm - Grumble about all the “shitty dubstep” being played in the park.  Be corrected by your smart-ass friend, noting that “it's more witchhaus than dubstep.”

4:03pm - Survey the thousands of fellow cool kids in the park, observing that “nothing is really going on today” and recollect “how much more action” was in the park last week.

4:21pm - Call Rhea's and order a vegan sando from a recovering heroin addict.

4:32pm - Your friend Tim turns up, seeing you checked in Foursquare.  He's standing 10 feet away from you and trying to call you.  You reach for your phone, unsuccessfully, and grunt “I guess I'll hang out with him later.”

4:58pm - TCB Courier delivers your sando, because there was “no fucking way” you were walking two blocks “in this fucking heat.”

5:00pm - My iPhone alarm starts ringing. The tour is over.  I stand up, throw two dollars in change in your face and wish you a “horrible Muni ride home.”

5:43pm - You're still standing at the corner of 16th and Guerrero, wondering if the 22 will ever show up.  I'm hunkered over the Pop's bar, squandering my hard-earned tour guide money on bloody mary's and bitching about all the drunk Marina types ruining the park.

Bro, you totally forgot your 5:30pm call to dad for help with grocery money (read: new rims for your sick fixie).

Awww yall can hang out with me FOR FREE at Dolores! :D Hit me up, I’m the girl on the Hello Kitty blanket.

Looks like it got pulled. “Sorry! This experience is no longer available.”

Thank fucking Chewbacca for that.

“Just look at that picture: not only does that dog not have any tats, but that guy’s shorts aren’t jorts.”

I’ve always been fond of calling them sheans, myself.

That’s kinda early to wake up on the weekend.

2:15 PM: Hula Hoop girl clocks in her full 8 hour day of ‘feeling it’ and hoola-hooping