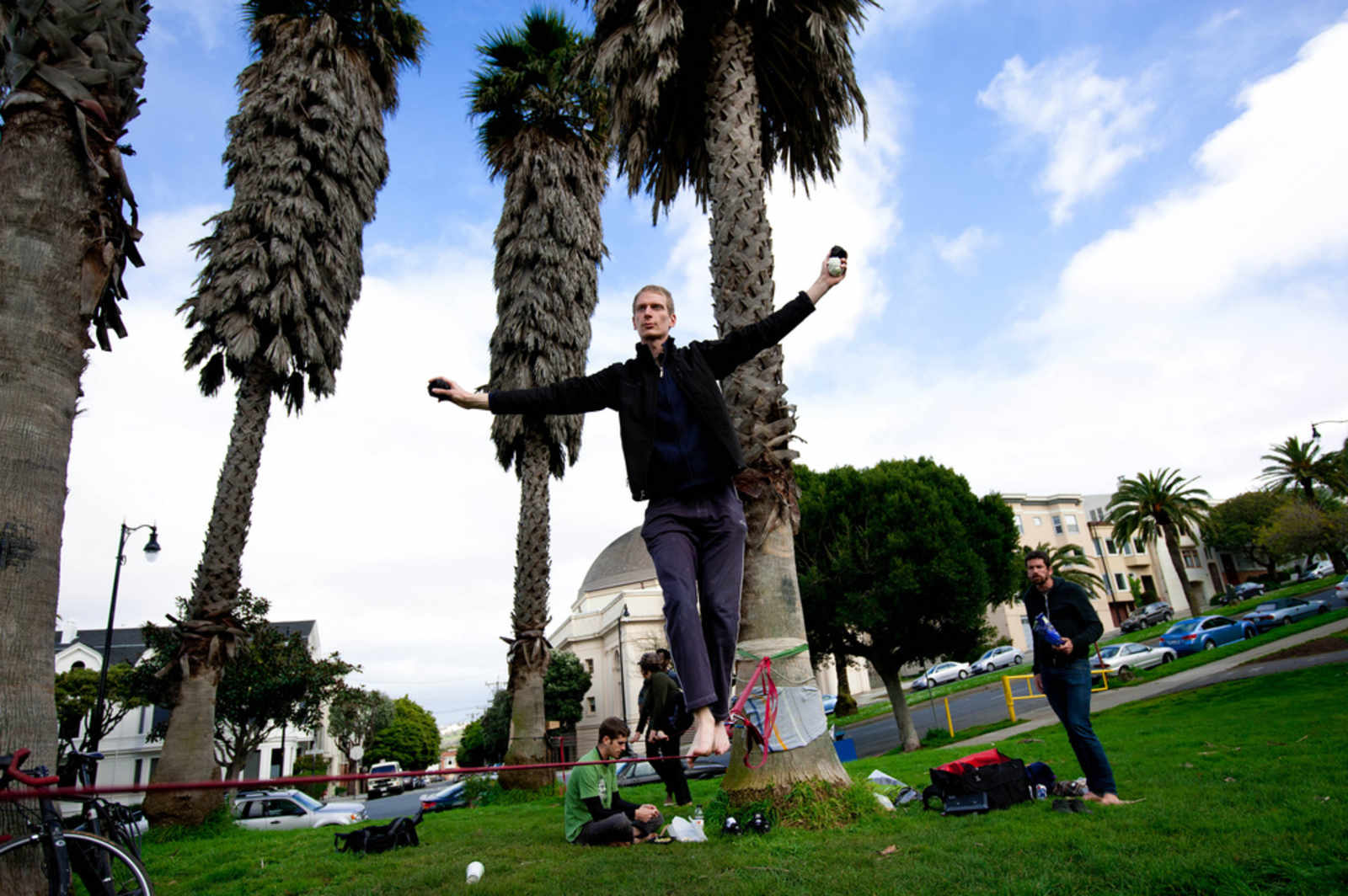 As the City of San Francisco continues its annual temper tantrum over people having fun in city parks, they've found a new menace to direct their attention to: slackliners—you know, those guys and gals who tie ropes from tree to tree and walk across them…real gnarly stuff.  Hide your kids!

See, the city's park policies make this (and many more activities) illegal, and now the slacklining community is looking to get that changed.

Max for SF Slackline fills us in on the situation:

Currently the rule says, “It's unlawful to attach anything to trees” in San Francisco. So technically it is illegal to rig a slackline to tree, attach a hammock, or even place a balloon on a tree in San Francisco. I have meet with the head of Recreation and Parks and they will not change the rule, but If I can prove there is community support and that slacklining is a growing recreational sport, then we can get certain spots (or certain trees) permitted for slacklining.

When Dolores Park was being renovated they wanted to cut down the palms where we slackline. A fellow slacker named Evan sent a complaint and prevented the trees from being cut down. This was first time the city acknowledged slacklining as community supported recreational sport. However in no way did it legalize slacklining, we just prevented trees from being cut down… Dolores Park authorities have tended to turn their back on a lot of things in the park (however, I have still been shut down multiple times in that park). We have always had access issues in city, with occasional ticket threat (in the Presidio in February, I was threatened by federal cop that he would confiscate all gear and give me multiple fines me for illegal movable structure, rigging on trees, and slacklining without permit).

I can understand why the city might want to shut them down, seeing as through they're dirty fucking hippies and what not.  But is it really necessary?  Well, no.  Obviously not—especially since they don't blast dubstep at other park-goers, nor do any real damage to the trees the parks department wanted to cut down in the first place.  But the city is against them anyway, which is causing Max and the SF slackliners to take action:

In response to growing slacklining community and the fact that Recreation & Parks will not classify slacklining as recreational sport, I decided to take action. Slacklining is in a gray area; no one has legalized it, nor is there any rule that says it's illegal. By getting local community support of both slackers and non-slackers, I believe I can pull enough evidence and credibility to designate “slackspots”, specific areas where authorities and park services will recognize its a slackline approved area.

Should you want to show 'em some support, Max encourages you to send SF Slackline letters of support, which you might also want to consider sending along to the Department of Recreation and Parks.

You can also send the Rec &Park letters in support of the ban.

A slacklining menace: picture this. Little Madison is chasing swift little Taylor pell mell across the well-tended grass while nimble Taylor looks back in taunting glee. Suddenly, she runs into the line at full-tilt,decapitates herself amidst a pressurized gush of blood. Who do the distraught parents sue, the slackliners? the City & County of San Francisco? the Wallendas ? Philippe Petit?

Seems like an alternative could be reached between the slacklining group and SF Parks and Rec by proposing that they install anchor posts for people to use instead of trees. SF Parks and Rec provides equipment like tennis / basketball courts, and fitness stations, why not slackline anchors? This could set a precedent for other Parks and Rec Departments across the country whose residents include slackline enthusiasts.

I suspect there’d be serious liability problems the City might worry about. Sarah Slackliner leaves her line unattended for a few minutes. Joey Juvenile wanders over, tries to jump on it, hurts himself, and sues the City for some species of negligence.

I think Max has the right idea by trying to let the parks people and the rest of SF know that slackliners have no interest in breaking laws, or trees. We are a group over 200 strong that is comprised of every walk of life in SF including doctors, lawyers, engineers, designers, chemists, business owners, and yes dirty hippies ;-) and we just want to use the parks in a healthy recreational way and share our growing sport with whomever wants a little more balance in their lives.

While I encourage all slack-liners to comply with the requests of park officials, I have yet to find anything in the park code that actually supports the idea that it is illegal.
I would be interested to know who if anyone has ever been cited in SF
The only two things moderately linked to slacklining in the park code I can find are: not being allowed to affix signs to trees and not being allowed to climb or sleep in trees.
Other than that I have only heard the requests from rangers (albeit sometimes aggressively) to take them down. With no law or code cited I wonder what type of citation would be issued?

In Seattle (as in the video above) the city has reached a healthy arrangement with the slacklining park users. This is an excerpt from The story that appeared in the Stranger

The parks department went a different direction. After arranging for an “informal chat” with Burtle on July 27, parks spokesperson Dewey Potter announced that the agency sees slacklining as an “emerging” sport. Which is true. After being created by bored rock climbers in Yosemite National Park decades ago and very slowly seeping out into the wider culture, slacklining has now become popular enough to have spawned clubs, national competitions, and do-it-yourself kits sold at REI. Potter says the city will issue guidelines this week for slacklining in city parks, which she describes as a sort of “best practices” document. (Basically: Be nice to the trees, use safe equipment, and if you go to use the bathroom, put some bright objects on the slackline so other parkgoers don’t get clotheslined.)

Still: What about the trees?

“Some people are very protective of trees, as are we,” Potter says. “But fortunately we have professionals to manage them… Our arborist says that if the tree is of adequate circumference that padding will protect it just fine.”

And the security guard who claimed slacklining was “not legal” in Cal Anderson?

“He’s been dealt with,” Potter said.

Burtle, who moved to Capitol Hill so that he could slackline more easily, says the most common reaction to his presence is not resentment, but rather interest in the sport.

“The average slackliner wants to enjoy the community, doesn’t want to annoy people, and doesn’t want to hurt the trees,” Burtle said. “Just like anyone else. It’s about fun.”
http://www.thestranger.com/seattle/the-great-slackline-debate/Content?oi…

Slackliners!! We’re gonna get you and make you pay your debt to society!!!

Nowhere in the article does the author suggest that any action has been taken by Rec Park against slackliners. So what if it’s technically against City code – if no one is enforcing it, just STFU and keep on slackwalking/disappointing your parents.