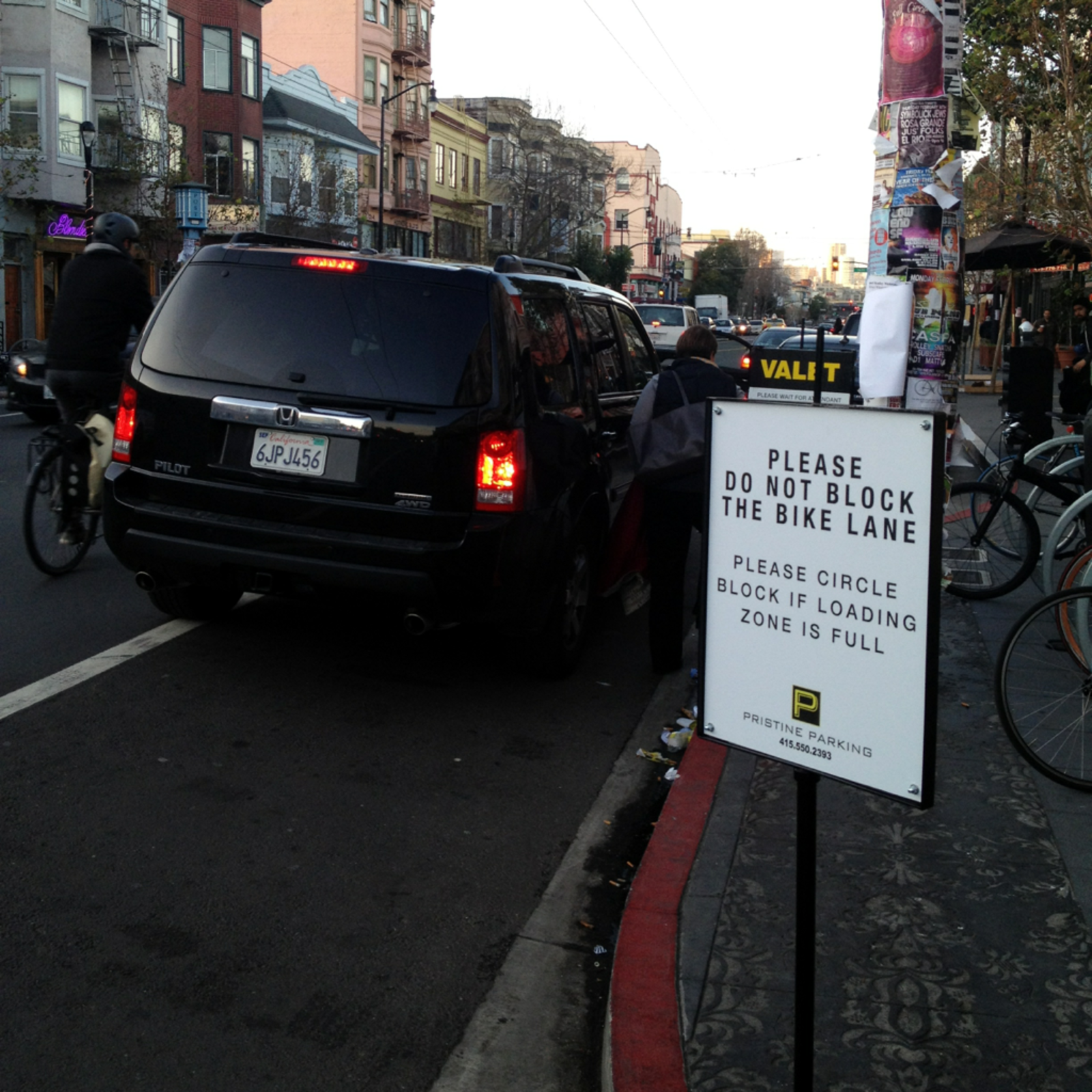 Locanda has been racking up bunch of 1 star Yelp reviews thanks to their “insane plan” of having valets block one of SF's most trafficked bike lines, so they dealt with the controversy in the most sensible way possible: posting a typographically-pleasing sign pleading for fancy motorists to “circle the block” and not block the lane.  And, as we can clearly see, baller Honda drivers are straight-up disregarding the signage.

Of course, all this wouldn't bother me if SFPD wasn't cracking down on cyclists disregarding traffic laws while letting this shit slide.  Can we, like, get a little reciprocity?

[Photo by Tastr, who's been covering the Locanda drama from the get-go]

Apparently poor reviews on Yelp has not prevented people from driving to Locanda to eat. Maybe Yelp is not as important as Yelpers think it is.

Amazing that with all those one and two star reviews Yelp still has the average rating four stars. Yelp is a huge fucking scam.

Pristine parking, the number is on the sign. 415-550-2393. Call em! We just gave em an earful this morning and told them when We get doored/hit in that area that we are gonna sue them directly. If enough people call,maybe something will happen before one of us is killed. But knowing the way the money moves in this town, Don’t hold our collective breath’s

As a bicyclist and Valencia Street business owner, I believe Locanda’s business practice is completely lame. I feel very strongly that we who have our businesses in the Mission have a strong responsibility to the community here. Locanda (and my own business) would not survive for one day without the creative, exciting energy of the Mission and the support of the people who live here.

A big part of that community is BICYCLISTS. Hello? I mean, look out your window.

My business has tried hard to be respectful of our customers, our neighbors, and the community. We miss the mark sometimes, but we are always trying. In the short six months we have been in operation on Valencia street, my experience is that our attempts to respect the community have ALWAYS been repaid tenfold.

I wish that photo could have included the sound byte of the cyclist yelling, “um hellooo, this is a bike lane.” cuz that was the best part.

I feel like telling people to circle the block is maybe more dangerous?

The city shouldn’t allow valet parking unless there’s room for it. In Locanda’s case, there’s no excuse for allowing the valets to be there.

I dont think the Honda is breaking the law here. Cars are allowed to stop briefly in the bike lane. The red curb means no parking, not no stopping, unless a sign says otherwise. Remember, under California law, parking in bike lanes is legal unless posted otherwise, and entering bike lanes to load/unload, park, turn etc is not just legal but required.