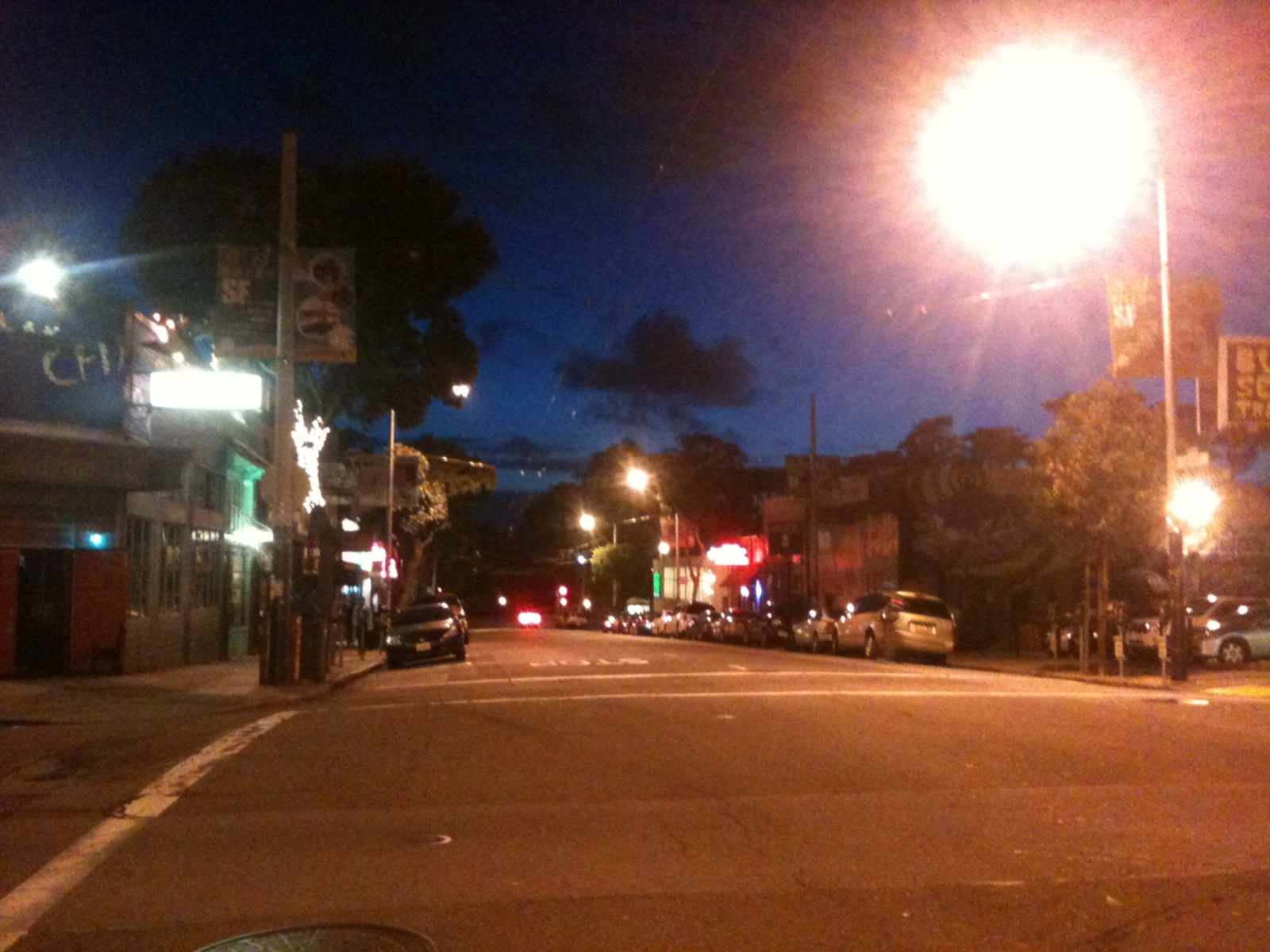 I found myself strolling along the post-Sit/Lie Haight Street last night.  The dozen or so 'undesirables' usually found planted on the corner of Haight and Masonic that are the bane of C.W. Nevius and grumpy old dude that owns FTC Skateboarding were no where to be found.  The sidewalk in front of the Goodwill was vacant.  Looks like the likely-unconstitutional law that recently went into effect worked, kicking all the gutter punks out of the Haight once and for all?

Nope, instead of people sitting on the sidewalk asking for change, Haight now has homeless people walking up and down the sidewalks, following people, begging for change and cigarettes.  One guy paraded himself from Amoeba to Cha Cha Cha yelling “THERE ARE DRUG ADDICTS ON THE SIDEWALK. HEY EVERYBODY, THERE ARE DRUG ADDICTS ON THE SIDEWALK.”  Another jumped in front of a Muni near the new Whole Foods, dancing and yelling “Who's my bitch?”  Another honed in on my friends and I, asking for a cigarette until one of us obliged, at which point he attempted to sell some banger weed.

I’d probably change that “likely-unconstitutional” to likely-constitutional, but that’s just me. It’s been vetted ‘n stuff….

There’s a reason Sit/Lie worked so well in Palo Alto: there was only one homeless guy to begin with.

Oh, did I say “worked”? Sorry. I meant “completely failed.” That one homeless guy in Palo Alto is named Victor Frost, and he still sits in front of Whole Foods every day begging for change, and occasionally running for mayor.

this sounds like a man i could be best friends with

Why do you have to knock FTC Kent? He’s done more for SF than your stinking transplanted ass.

I knock him for the same reason I knock Republicans, anti-choice activists, and the like: he publicly supports civil liberty-crushing legislation while being a complete hypocrite.

How someone like Kent Uyehara, who makes a living from selling shirts and skateboards to some of the most hassled people on city sidewalks, could have pushed to restrict the use of public space even further is a little mind boggling.
If you don’t like being hassled by cops, it’s a good idea to never buy ANYTHING from this fascist in skater’s clothing.

Boycott FTC Skateboarding, SFO Snowboarding and Kent Uyehara.
Do it For The City!

Typical SF knee-jerk reaction. Seriously, you people act like SF is a total authoritarian police state a la North Korea, when in reality you have one of the most lax big city police forces in the country. You self-styled “revolutionaries” need to pull your black bandanas out of your collective asses and get a little perspective. Seriously.

Actually, we just want to avoid turning San Francisco into a “total authoritarian police state”.
Your buddy Kent Uyehara and his stores, FTC Skateboarding, SFO Snowboarding, are working to restrict people’s freedom.
Yeah. We’re against that.

The level to which the anti sit/lie folk will exaggerate the “authoritarianism” that supposedly rules their ‘severely restricted’ lives is entirely disingenuous. Their arguments remind me so much of freshmen college students “protesting” against partying restrictions in the dorms, and assuming the thin mantle of middle-class anarchism is nothing but laughable.

Hey guys. Sorry this is long but oh well. Those “freedom fighters” for whom you struggle–the crusties and tweekers who populate the Upper Haight with their scabies and dogs-on-a-rope are not just loveable little street urchins. A lot of them are scary members of street families who abide by some very anti-social street rules that include violently attacking “straight” folk who offend them. I’ve been aggressively panhandled by these “freedom fighters” to the point where I was followed two city blocks by a ranting and foaming-at-the-mouth teenage girl screaming obscenities at the top of her lungs and grabbing at my arms, and her late 20’s male companion, simply for saying “no” to their request for money. I finally boarded a bus in desparation, as no one on the street was giving me any help. My attackers banged their fists on the bus then started throwing glass bottles and other miscellaneous trash at the bus. I can only assume that large amounts of meth, along with the street family cult-like, anti-social brainwashing was responsible for this type of behavior. These kids are *not* the type who will be using the resources of the City’s teenage shelters and support networks; they are the youth equivalent of those types of bums who militantly insist upon living on the street, and annoy us “normals” with their poop and urine, aggressive panhandling, menacing behavior, property crime, and frequent OD trips to SF General on the City’s dime.

So yeah, I specifically “don’t* want these kids lounging about the City, and I think it’s perfectly OK to make it difficult for them to live their criminal lifestyles. There is a BIG difference between a down-on-his/her-luck person who is trying to get free of whatever monkey on their back that is preventing them from rejoining society and the quasi-criminal street kids and adults who take advantage of SF’s homeless programs. Those homeless advocates who pretend not to recognize any difference between these types are doing the homeless deserving of aid a real disservice.

The sit lie law makes criminals out of any person who sits on the sidewalk, not just the people who frighten you.
It makes EVERYONE a criminal if they sit out in front of their own homes. Say on a warm summer day.
As to your terrifying experience, moderniste, what did it have to do with sitting?
How is it addressed by the sit lie law?

Here’s how the sit/lie thing affected my “terrifying experience”: the 15-ish teenage girl and her late 20’s companion were sitting in the middle of the sidewalk in front of Held Over, forcing me to walk into the gutter to get around them. The girl sneered at me and said, “cute outfit. Spare change, fancy bitch?” I actually (and probably stupidly) stopped at the ‘bitch’ part of her spiel, and said “NO thank you” in a rather firm tone. In hindsight, I probably should have meekly trotted away, but her attitude just bugged me. And she and her companion were surrounded by an elaborate habitat of a blanket, several candles and a bunch of beads they were stringing. Clearly, they’d been sit/lying there for sometime, and forcing all passers-by to walk into the gutter around them. I guess I was the only one stupid enough to arouse their anger enough that they stopped sitting/lying long enough to chase me down the block. So that’s how the sit/lie thing affected me: if the law had been enforced, everyone walking down that side of Haight St. on that day wouldn’t have had to deal with their anti-social bullsh#!.

How fun is this?
Not only is Kent Uyehara a hypocrite, so are you.
Here’s a picture you posted of yourself violating your beloved sit-lie law:
http://farm4.static.flickr.com/3358/3188573093_6fec98fbee.jpg

No need to get all hostile towards fellow readers. Let’s just remember here that Newsom and SFPD’s marketing of “Civil Sidewalks” did nothing more than brainwash people into thinking sitting was the problem. However, this was only a feel-good law–it does nothing to help people with their legitimate qualms with tweakers.

Moderniste: no one is saying your experience didnt suck or doesn’t deserve to be addressed. However, legislation that is aimed at helping business doesn’t address your concerns. Rather, it sounds like SFPD and bystanders failed to aid you while people violently harassed you. No civil liberty-bashing law can fix that…

KevMo, I must politely disagree. The two sit/liers in question were directly blocking the foot traffic *in front* of a business, Held Over. I’m no shill for big business, but longtime Haight St. tradesmen like Held Over shouldn’t have to deal with moody crusties blocking their entrance. Asking those two to get up and move their crap seems blindingly obvious. And it makes me boil when people like Cow take things to the illogical extreme by positing that The Copz will roust residents sitting outside on their stoop on a sunny day. No they won’t. This style of argument makes me stop listening posthaste. Word for the day: Disingenuous.

“No they won’t.”
Why?
It’s against the law.
Why would you expect police not to enforce it?

Um, nice try. That was a photo shoot back in the 90s in front of my place of employment where I had permission to sit/lie on my scooter.

It’s against the law now.

By taking things to the nth degree–hypothetical situations that will never exist in the real world like cops arresting citizens on their own stoop for “enjoying the weather” or insisting that staging a photo shoot in the entrance of one’s place of employment is against the law and would bring down the long arm of the law simply makes you a laughable martinet. And it weakens your argument.

When you debate someone and refuse to even acknowledge their point of view, those listening will completely discount your position. I do not wish for needy people to be abused by law enforcement, and the sit/lie law should not be used for this. But to pretend that those in law enforcement are mere robots who enforce without discretion is just plain stupid. The sit/lie law was designed to discourage all of the annoying and often dangerous street people habits we all know too well and I won’t bore you with detailing. Quit pretending like we’ve suddenly entered an Orwellian fascist state where everyone, no matter what their criminal status, is rounded up off the street for any minor infraction. You simply aren’t that interesting to “The Man”.

There are some valid points to be made against harassing people who are down and out and on the street. But your method of denying grey areas makes it impossible to carry on a reasonable discussion. And so I end mine.

Thanks for the kind advice, scooter girl.
You are clearly a mastur debator.
However, I take no comfort in your assurance that the police will not enforce the law when it comes to me or you.
I would simply prefer that there not be a law that makes sitting in a public place a criminal act.
For everyone.
Even on a chair (or a scooter).
Including on the sidewalk in front of their own home.

KevMo, let me get this out of the way–I LOVE your blog; it’s a daily read for me. But I don’t understand how FTC Kent’s support of sit/lie is hypocritical as evidenced by the link you posted in this comment. Explain.

I’m starting to think “sit blog” legislation would have been a good idea. But then its wide net would have probably caught me.

Many of us know this, but Sit-Lie was never about Haight Street, and the locals/supporters of Sit-Lie were duped into giving SFPD a long-term management tool for the City.