Rock Against Reagan in Dolores Park 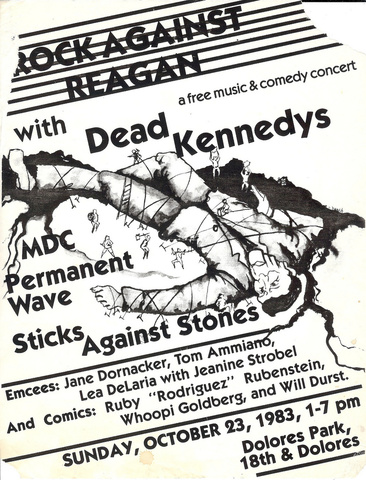 Cranky Old Mission Guy just uploaded a scan of the flyer for the Rock Against Reagan concert that happened way back in the days before Whoopi Goldberg ever starred in a movie, Tom Ammiano was a supervisor, Will Durst had a radio show with “Da Mayor”, or anyone ever went to Dolores Park for anything other than heroin.

No doubt this was one gnarly concert, although it seems like it went largely unnoticed at the time.  The searching the SFPL “eLibrary” doesn't turn up any old newspaper articles on the show and, unfortunately, not too many videos or photos from the event are floating around the internet.  All I could dig up was a snap of the Dead Kennedy's on stage by Tom Erickson: 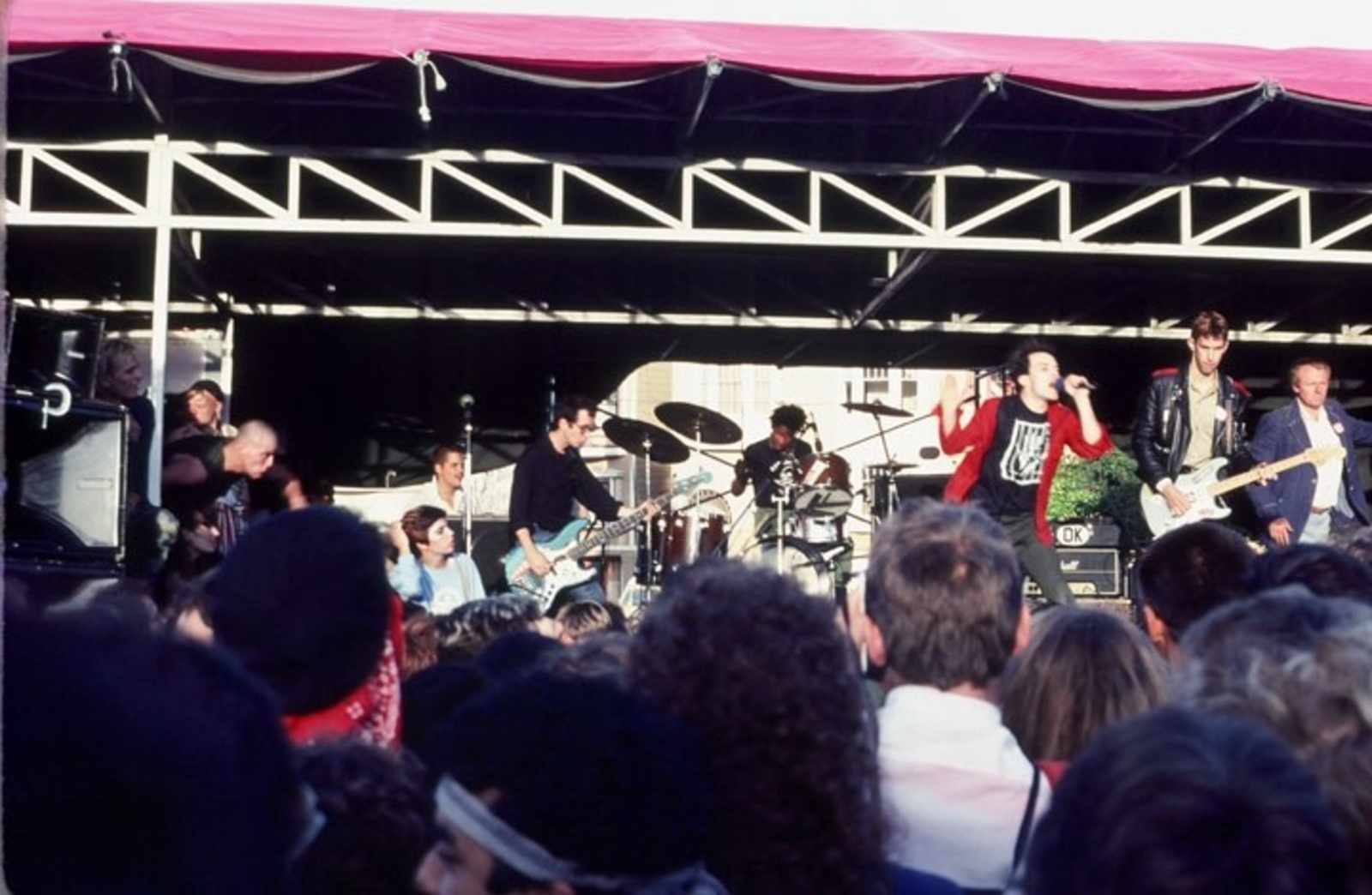 And this short video of MDC and people going nuts in the crowd (originally posted by Sanjiban Films):

Now, I'm pretty sure there haven't been any awesome concert in Dolores since Fugazi played a couple of times in the early 2000's. Maybe it's about time someone steps up and changes that so future generations can reminisce about the time they put Elmer's in their hair and threw themselves into a sea of people?

Now that Jerry Brown is back, perhaps the Dead Kennedys can treat us to a live performance of California Uber Alles.

Doubtful. I don’t think they would even speak to each other these days, never mind play together. Besides, Jello’s perception of Brown was wrong in almost every aspect.

There was another “Rock against Reagan” concert during the Democratic Convention in 1984, but I can’t remember where it was. I think it was the one day I didn’t take BART to the city to collect buttons etc. from all the delegates.

I think you’re right; I vaguely recall going to another Dead Kennedys show, during the Convention, at a big vacant lot with a fence around it South of Market. The fence and the crowd made my girlfriend (later my wife!) nervous, so we left early. I think I heard about a march and some arrests later on the news, so this show might be easier to look up.

I was there. LOVED MDC. They would play the song slow(er) and speak the lyrics then play the song up to speed and we could understand the lyrics! Dead Kennedys played every three seconds in town esp. at the On Broadway…oh, the good ole days!

Re: No awesome concerts.

I saw Shotwell play there a few years back on the steps. That was pretty awesome.

Haha. I’d say Jerry and Jello are cool now. Jerry used to have a KPFA radio show and Jello either was a guest on it or he was appearing at an event at Jerry’s compound in the 90s.

The Rock Against Reagan show at the 84 Democratic Convention was in a big parking lot at what is now Yerba Buena Center. I missed most of the show cause I got arrested w/88 others earlier in the day. Over 1,000 people after the concert marched to the Hall of Justice to demand our release – 300 got arrested. From jail we watched Geraldine Ferraro (VP nominee) on TV talk about all the freedoms in America (which apparently didn’t include walking legally down the sidewalks of San Francisco).

Thanks for posting this, Kevin (and thanks - Cranky Old Mission Guy). I’m working on a documentary about the opening band “Stick Against Stone” (no “s” at the end) that traveled across the country on the fall ‘83 RAR tour - and if you come across any pictures or video of them as a result of this article, I’d be very interested to discuss possibly using it in my film.

I caught the Rock Against Reagan concert in Delores Park, also. I went with an artist named Andrew Toler from Haight & Fillmore, next door to Victor Arimondi’s photo studio, 551 Haight. Judith Seamster lived above. After the concert, we went to The Stud. Sure miss those days. We live in Milwaukee now. Thanks for the Photo Memory Trip! PS Remember when all those Huge Rats were hanging out in Delores Park, biting peoples’ kids and dogs?

Hey, this did not go unnoticed at the time, this was the biggest punk rock concert ever held in the bay area, and it was amazing! I did my first stage dive, some guy gave me a tall can of schlitz, and at one point they were throwing out joints by the handful from a garbage bag.