Bike Thief Caught in the Act Last Night at Pop's 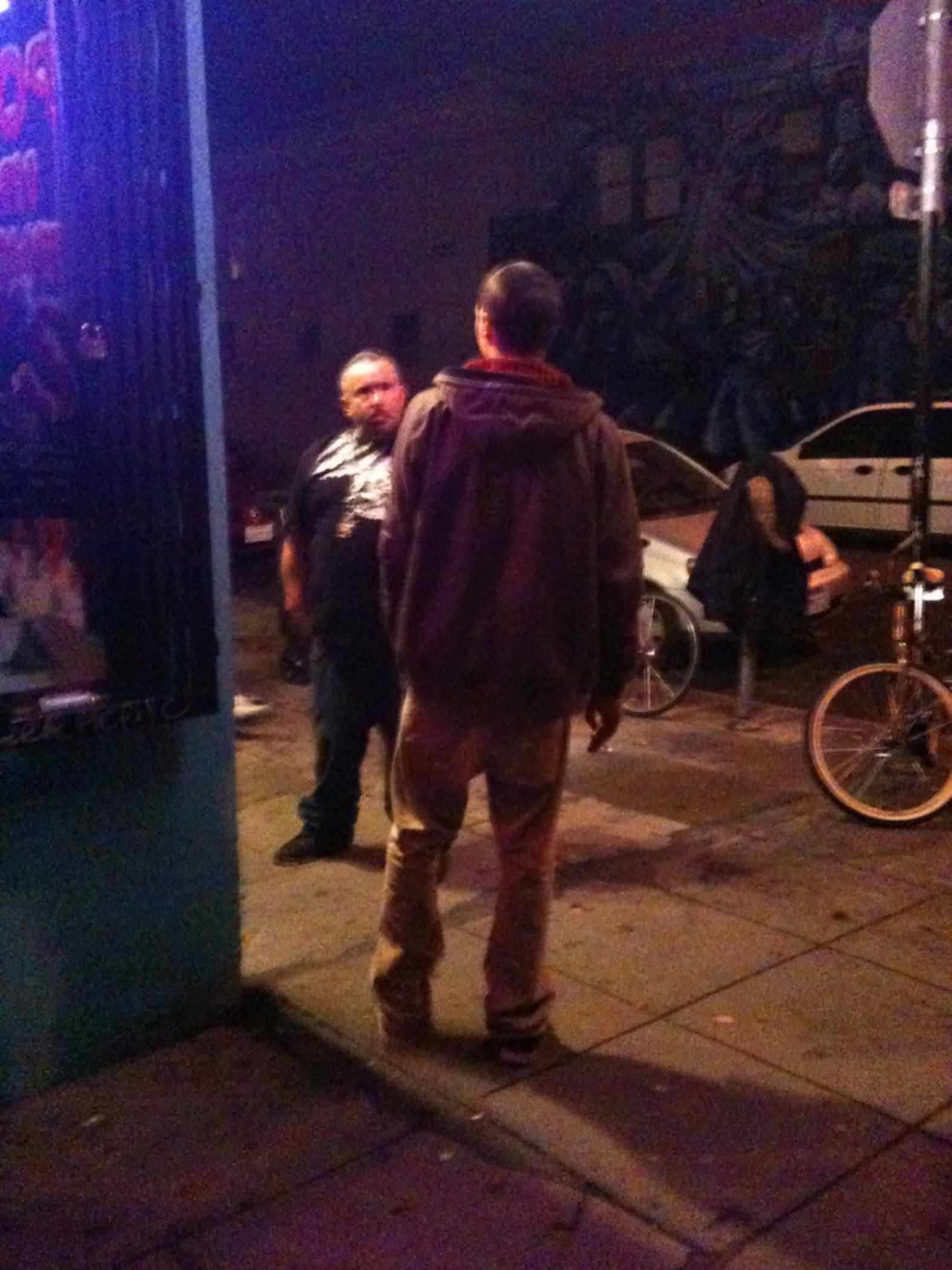 Speaking of bike theft in the Mission, it sounds like shit also went down at Pop's last night.  From a reader who'd prefer to stay anonymous:

major drama at pop's last night. i guess some dude caught this latino guy wearing ed hardy trying to steal his bike and started confronting him. the bartender got in the middle of it, got up into the thiefs face and started yelling at him to get a real job and stop stealing peoples shit. i started taking pictures, but the thief's buddy started yelling “this girls taking pictures! this girls taking pictures!” i went back into the bar and the friend followed me and cornered me in the bar to make sure i didn't take his pic. i have no idea if they called the cops or what happened to the bike thief because i got the fuck outta there.

For the interested, this is the same dude that we posted about back in August.  Lock yer shit up, people.

Give the photo to the cops! Find the victim! Prosecute the fucker!!

I caught a guy walking down the street in Japantown pushing MY BIKE along, about a block from where I’d had it on my boyfriend’s car rack. I took it back from him (the front tire had been locked to the rack, but the thief had supplied ANOTHER front tire to make the rest of my bike roll) and called the police. By this time we were in the car on the way home to land in SF that is technically NPS property, so SFPD would not come take the report.

So the next day, on my bike ride back from work, I stopped in at the Mission Station. The office pretty much refused to take my report as the bike was back in my possession. I asked him if it was maybe a crime to take a bike locked to a car (and then walk off with it) and if I had a legal right to make a report. He then proceeded to take the report in the most begrudging fashion humanly possible.

The next day I got a call from a Lieutenant who said she was following up on a rash of similar crimes. They had a suspect in mind and so she wanted to send a sketch artist out to me to see if this guy matched up and they could get more evidence. The sketch artist came to my office (not on NPS property) and took the sketch (which is actually a fascinating process). They said I would hear back if it matched up, but no go I suppose. I could follow up myself, but haven’t bothered to.

What I learned from this is that crime, however trivial, should go reported. The lower level officers might not act like they care, but if it fits into a larger picture, then maybe some good will come. I also learned that it’s stupid to leave your bike locked with only the front wheel U-locked to a vehicle. I also learned that seeing someone caught in the act of stealing my bike brought out the mama lion in me. All useful lessons…

I kind of have a similar story but I rolled up on a dude who stole my truck. It was when I’d first moved here. I kept my keys on me figuring the city was small enough, sure enough I see dude posted 2 blocks from my spot. I got my truck back.

His name is Bobby. He lives at 1165 York. Fuck that crack head piece of shit.

that dude sounds pretty amateur. I had my kryptonite ulock, the smallest one, liquid nitrogened and hammered x the street from there. if that dude is just trying to take wheels and shit, that aint what you should be worried about. i had a whole bike stolen.

“Sanctuary City for the bike thieves” ….

How are these guys stealing bikes so quickly?

I recently talked to a dude at Pop’s who was using a good Kryptonite New York Fahgettaboudit U-Lock; his bike was stolen in < 10 minutes.

These locks are designed to be too small to pry apart and aren’t very thermally conductive – which means liquid nitrogen and a hammer won’t work either.

I was in Pop’s for the art show yesterday and overheard a bunch of the bartenders talking about that guy and a number of incidents in the past few days – including the wheel’s of one of the bartender’s being ripped off. It sounds like they have hit their limit with that dude too. I also noticed they had fliers posted around the bar warning people about bike thieves on the block.

Hey anonymous person who submitted this… I’m the manager at Pop’s, please contact me (anonymously, if you so please) so I can get further details and/or pics you may have taken. Yes, we are all fed up with this guy. Everyone who works at Pop’s relies on their bike on a daily basis and we understand how shitty it is to have your bike or parts stolen and we are working diligently to make 24th and York safer for bikes.

For future reference, if you see someone acting suspiciously, the Mission Station number is 415-553-0123. Dialing 911 usually routes you to CHP at that location and then you have to get transferred to SFPD and it delays response time.

That was the only picture I got from the scene.

Basically, what Kevmo posted was all I saw/heard from the scuffle. I went outside the bar, saw some guy that works for you yelling at the Ed Hardy bike stealing douche for, well, stealing bikes. I tried to snap some pics on my phone, got called out, retreated back inside, and left shortly after.

So, we’re going to file a restraining order against him after Christmas. ANYONE who has witnessed events involving Bobby Martinez (the guy in the Ed Hardy shirt) and can provide witness statements can contact me at popsbar AT gmail dotcom.

You shouldn’t be afraid to take pictures of someone in a public place (like a sidewalk). It is perfectly legal for anyone to take a picture or record video of anyone else in public. Anyone that goes out into “public” has to understand that by doing so, you are assuming that this might happen. It a basic legal precedent. Obviously, if you are standing in public and are taking pictures of something inside a private residence, say through an open window, than that is different, although there are some that say otherwise.

If something like this happens again, someone should whip out their phone and start recording. If someone gets Ed Hardy Douche on tape, either attempting to steal bikes or even making physical threats to anyone, than Im sure that the police will take the matter more seriously. It’s all about evidence, and making things stick.

Can we all take up a donation and set up a cheap camera to be installed outside Pops? I intall cameras for a living and they have become super cheap, like $100-150 dollars cheap. It can be wired to a TV or monitor inside where everyone can watch their own bikes. I’m totally willing to provide the labor/knowhow. Doesn’t Pops already have a DVR and cameras setup inside? Is there any unused ports on it?

Either way this guy is going to keep doing what he is doing as long as he is getting away with it!

what i find most shocking about this ongoing expose is the fact that not one patron or employee of Pops has kicked the sht out of this guy. you hipsters need to bulk up. do all of you have womanly bodies or what? certainly one of you must be a closeted ex-athlete.

While the idea of a Pops patron and staff boot party on the Ed Hardy wearer is generally cockle warming to imagine, there are at least two problems.

A) It is never wise to fight with crackheads. They may not know karate, but they know crazy. They are also a bit unhinged and likely to return later with a firearm.
B) “Random” street beatings are something the SFPD may care about and I’m sure the Ed Hardy fan would report such a thing.

It seems good that the Pops folks are trying to solve this without pulling a ‘Death Wish’. It seems best if Pops avoids the reputation as the bar that beats people.

I’m sorry, that’s actually totally correct. All of it. Except the part about knowing crazy. I think the lyric is Ka-razor. It’s been much debated, but that’s where I stand.

Years ago, in So. Cal, I walked into a guy who had just snipped the wires to the power/heated side mirror of my truck. I kicked him in the crotch and he dropped the pliers. I proceeded to pound him till he went to the ground and I continue to kick him in the head and chest area. All this time a lady shopper in the parking lot kept yelling for me to stop attacking him and she’s calling the police. I kept kicking and yelled for her to go ahead and call the cops. Long story short, police officer help guide me with the police report by guiding me about how I felt my life was threatened when I saw the pliers. I thought it was a knife and proceeded to defend myself, afraid for my life. Fast forward last year. Drinking outside a bar close to Union Square when someone runs around the corner and yells out “I think someone’s trying to steal bikes”. My buddy and I run around the corner and sure as sh*t, this DB has a bolt cutter and hovering over our bikes ready to cut in. My buddy gets to him first and nails him in the back of the head. We then proceeded to beat and kick him till we’re pulled off by the bar’s bouncer. SFPD eventually arrives and long story short, the officers guided us with the police report. Both jerk-offs actually went to prison. I attended their hearings, months later. If you’re lucky enough not to be in danger and dish out a beating, and you play it cool and polite with police officers, you’ll be surprised how much can be achieved with their guidance…just saying. Oh, I’m no muscleman, average height with average weight. I just don’t like theives. Thanks for indulging me.

It takes a real man to kick someone in the head when they’re on the ground.