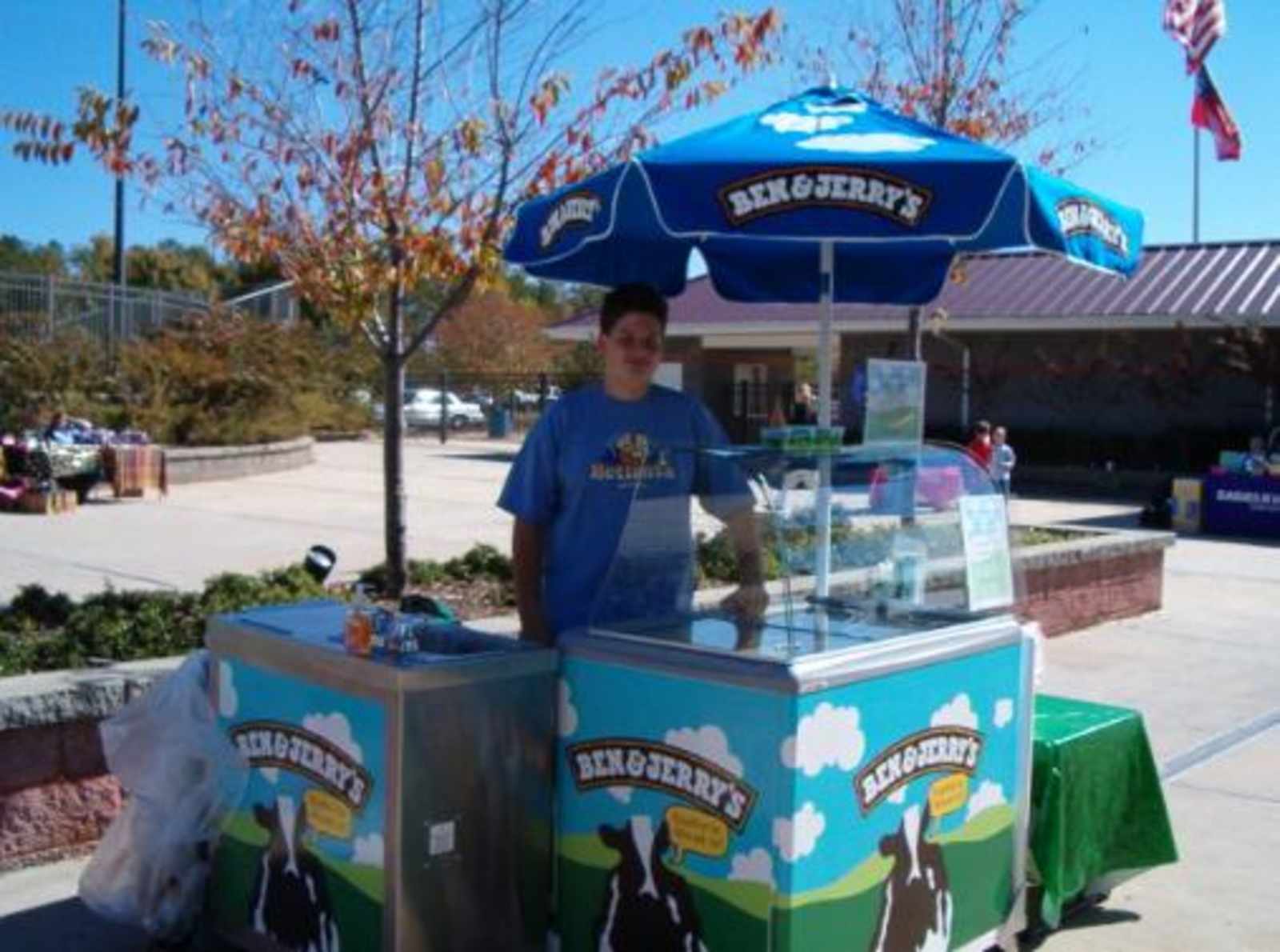 Wouldn't this have looked awesome in the middle of Tallboy Terrace?

A slew of information obtained through the Sunshine Ordinance revealed that the SF Department of Recreation and Parks both neglected local businesses and put little thought into the commercialization of city parks.

As you may recall earlier this fall, many area local businesses, neighborhood “activists”, and Dolores Park neighbors were upset over “chain” businesses moving into Dolores.  The controversy stemmed from what they claimed was a lack of outreach done by Rec. & Parks on the program and quickly ballooned into a debate about what our parks should be used for.  Eventually groups circulated a petition claiming McDonald's would be next to move into Dolores (which I initially dismissed as hyperbole), threats were made against businesses planning on opening in park, and one of the two businesses canceled their plans to open.

Following the controversy, Rec. and Park director Phil Ginsburg wrote about the merits of food carts operating in SF Parks in the Chronicle, citing the popularity of “Creme Brulée Man, Sexy Soup Lady, Adobo Hobo, Soul Cocina and Mobile Pho” as well as the thriving scene in NYC's Central Park, where people can purchase “inexpensive and popular fare ranging from soup and sandwiches to Turkish tacos.”

In a city as diverse and dense as San Francisco, the Recreation and Park Department is devoted to maintaining and improving what open space we have. Bringing a carefully chosen cadre of food carts into our parks is a natural extension of that. Food provides a reason for gathering. Gatherings are where people interact and community is formed. Parks provide a natural space to gather. Uniting food and parks creates an active, dynamic space for San Franciscans to enjoy.

Ginsburg's op-ed suggested that the Department had debated the merits of commercializing open spaces.  However, the requests for program plans revealed no such thought was put into the decision to privatize parks.  The request directly made to Recreation and Parks:

A copy of the business plan, strategic plan, work plan or any internal strategy documents surrounding this initiative/program. Documents that answer: How it was conceived? What are the pros/cons? What are the risks and mitigation of those risks? What were the strengths, weaknesses, opportunities and threats of this idea? What are the financial projects? What are the liability issues? What is the environmental impact? What kind of outreach is necessary? What are the legal implications? Etc.

The Department was unable to provide any documents for this request, which implies no strategy was put into the program and was initiated on a whim.

Under the program that is commercializing Dolores Park, many other neighborhood parks are going to be litered with food trucks.  Duboce Park is going to have a juice truck (company unknown), Marina Green will have Twirl and Dip Soft Serve and Annakoot Indian Food, the Band Shell in Golden Gate Park will have Blue Bottle Coffee, Little Guys Sliders, Sam’s Chowder-Mobile, and Waffle-Mania, and Civic Center will have Leba (a falafel truck) and Blue Bottle Coffee.

Nick Kinsey, the Assistant Director of Property and Concession Management for the Department of Recreation and Parks, also says that the Department is still accepting proposals for Dolores Park, but “I am not sure that we would consider anything additional at Dolores at this point.”

Well that’s no good. They really chose the wrong approach with this one.

A sunshine ordinance request, I’m impressed. I might have to up my game.

Thanks for this report. A disturbing reminder for alarmists like me that SF’s always on a slippery slope to turn lame.

Phil invited Burger King but not In and Out,?? hahaaa

Friends of the Music Concourse shares the concerns about the impact of the food trucks on our parks.

We have been active in preserving the Music Concourse and trying to keep it from over-commercialization and destruction of its historic character. We recently submitted a memo to the Recreation and Park Commission and to the Historic Preservation Commission, asking that the new hot dog and other food vendors, the recently approved Segway stand, and the proposed bike rental stand be reviewed for historic appropriateness. Yes, all of those are planned for next to the Bandshell!

We have requested that an overall plan be drawn up that will enhance, not detract, from the Music Concourse. A positive plan for this area has already been outlined in the Golden Gate Park Master Plan.

The Music concourse is a classic, peaceful space that provides a beautiful respite for San Franciscans and visitors alike from the pressures and commercialism that permeate our 21st century society. It is a special place, unique in San Francisco and perhaps in the world. The Department of Recreation and Park has taken care that the original design and materials be preserved during the recent construction, at great expense. We encourage RPD to also preserve the special feeling of this area in its development of any commercial opportunities.

More information and a copy of our memo can be obtained by signing on to www.musicconcourse.org.

Fuck me. Now are you gonna listen? Now are you gonna see? Thanks for taking your head out of your ass and looking at the clock to see what time it was. Calling Blue Bottle McDonalds is not alarmist. Sure, I might have to yell and scream and paint the most dour picture to get people to listen, but the message is true. Everything I said is true. They are inviting chain stores to open in our parks. There is no process. They do not have our interests in mind. At all. These commissioners need to be removed. Are you gonna make me look like the bad guy now? Am I the aggressive hipster now? The fight for concession trailers and taco trucks in Dolores Park was a fight about process, not coffee. And not for once second did anyone think that I either had the power nor the inclination to spit on 1 person or to get an army of idiots to spit on anyone. BB didn’t pull out, the permit was rescinded. There is a new mayor coming to town, like tomorrow, and if he won’t yank these toxic commissioners then we will make sure to put legislation on the ballot next November to put that power in the people’s hands. I’m glad to see that you are not allowing Phil Ginsburg to lead the witness anymore. Watch as they fight for their appointments and their jobs. And fail. If they won’t give us the process we want, we are a motivated, organized group that is effective and efficient. We will pressure Supes to rekindle the charter amendment to get the power of appointment of the commissioners of RPD and if we fail we will put it on the ballot and if it goes to the ballot it will be voted into law.

No sneaky capers allowed. If people want trailers in the park, let the trailers survive the process. I think we will all agree that we all want food carts. Push carts in the park. But we don’t want giant trailers. We dont’ want a food court. And we don’t trust RPD anymore. They have shattered our trust. This issue has nothing to do with coffee. This is about bad government. They asked fucking Wendy’s for a proposal to put a trailer in Dolores Park. These people are either so corrupt, so stupid or so out of touch they desperatly need to be replaced. So says me and the thousands of people who stand behind me.

None of which, by the way, would ever spit on anyone at anytime for any reason. But all of them are smart enough, savy enough and astute enough to be able to read between the lines of a little hyperbole unlike what seems like 90% of the “journalists” reporting on this issue before you wrote this article. Which is also missing a key fact that we are not the only group railing agaisnt RPD. If you wanna do a little research, you might find that this is just the tip of the iceburg. I mean, if ya wanna give the whole story. But I’ll keep an attitude twards you, punk, so you have an easy out. You seem like a guy who likes an easy out, huh Kevin?

Because if you piss me off again, I’m gonna hunt you down like a dog. And smother you in kisses. And that, my dear boy, is a threat.

PS. I’m going to send this link to my list tomorrow. Lets watch your ‘hits’ or viewership or whatever go through the roof. I remind you that we are an active, organized group. That are mad and show up and care and are way cooler then you and have so much street cred guys like you seem like bellhops in comparison. So there.

You threw a whole lot of shit against the wall and some of it stuck. Congrats.

Let me know how to help remove Phil Ginsburg and the Rec & Park commissioners who serve no one except special interests that will help their own careers… I’ll bet all the commissioners got free tickets to the World Series games played here. Tickets to baseball games are just one of their many perks.

Funny, Ive not seen 7+7 or SFWeekly foodie report on this! Cat must got there tongue

Congrats on outing the ever so corrupt San Francisco Recreation & Park Dept. who is busy privatizing OUR parks while we pay their big salaries + benies! Phil Ginsburg, the General Manager, should be thrown out along with everyone he’s hired because they are all political hacks. Don’t worry this won’t include any gardeners or recreation directors because Ginsburg cut all their jobs so he could hire more yuppie P.R. people to work for him and cover his ass on all his corporate deals.
Ironic that SF Board of Supervisors voted against toys in “Happy Meals” at McDonalds while Ginsburg was courting them!

I hear that they “selected” a New Mexico based souvenir CHAIN to take over the boathouse at Stow Lake in Golden Gate Park, evicting the family who has run the place for 67 years. If you go to www.savestowlake.org there’s a cool chart that shows that the boathouse family offered to pay $75,000 a year more in rent than the New Mexico chain, yet Rec & Park selected them anyways. That’s going to help the budget? That’s going to help California’s economy…. a lot of sleeeeze going on.

I heard that Bevin Dufty is giving even more power and decision making to Rec and Parks. If this is true the corruption is totally out of control. Any information on this and if its true?

Here is something about this
http://www.beyondchron.org/news/index.php?itemid=8678#more