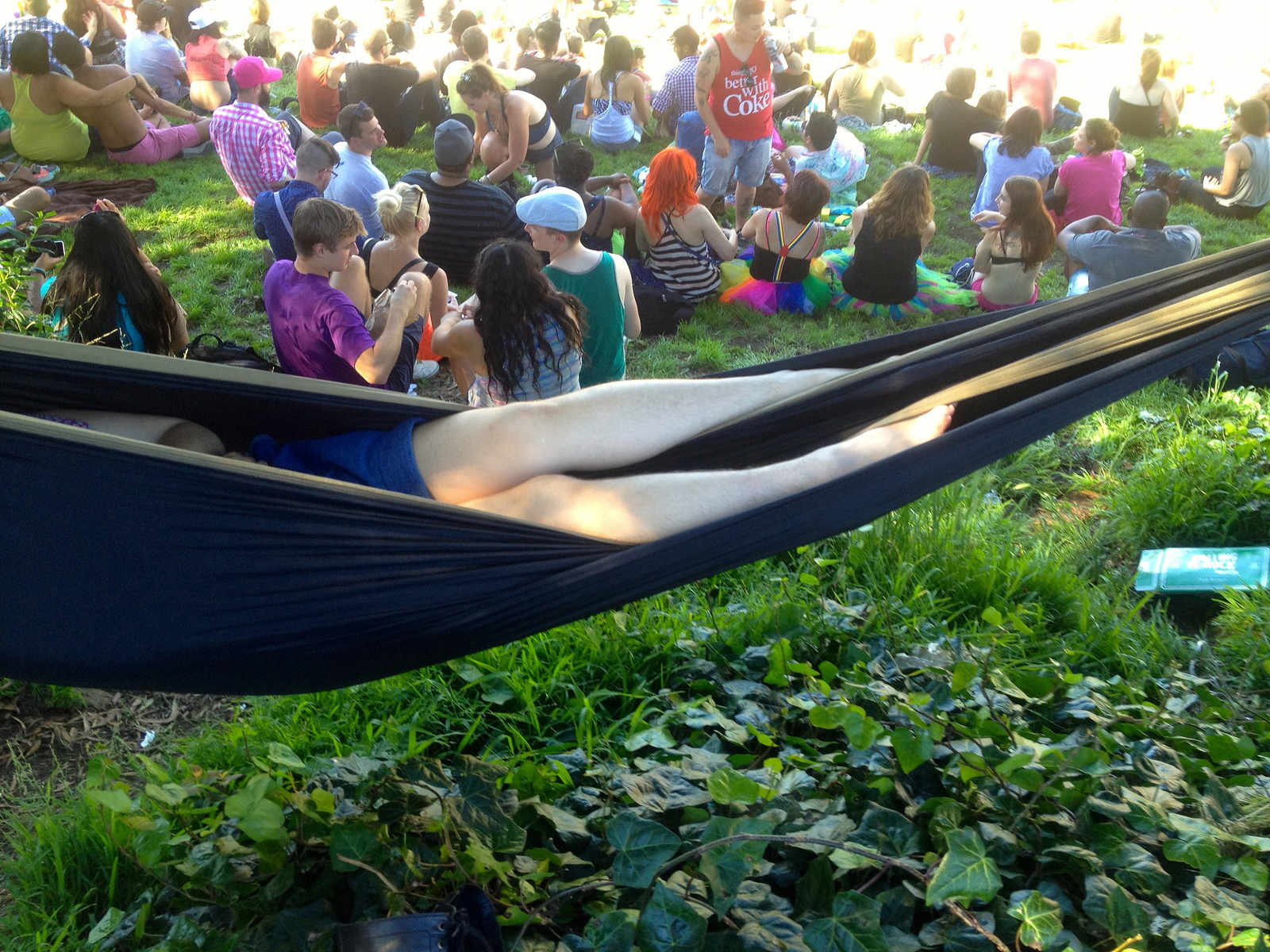 Michael Libertin is a real chill dude. The former Mission District resident loves parks. He loves naps. He loves naps in parks. So, like any right-thinking individual, Libertin headed down to Dolores Park this past Saturday with a plan. And what was this most chillest of plans, you ask? Libertin was going to nap.

And nap he did. But, according to Mission Local, something went horribly wrong:

[Libertin] was enjoying a lazy Saturday afternoon in a hammock he had slung between two trees when he was issued a citation under Parks Code 4.05, which prohibits “malicious defacement, damage or destruction of real or personal property.” One of the parks officers, Libertin reports, was none other than J. Chan of recent Facebook-video fame. […]

Libertin isn’t going to take this lying down. He’ll contest the $192 ticket, as he contends that his sleepy Saturday afternoon was (a) not malicious and (b) not damaging to the tree. In fact, the straps he used to hang the hammock are specifically considered “tree friendly.” Moreover, he went back and photographed the trees a day later to show how conspicuously intact they remain.

And while it may seem absurd that the city is now citing people for napping in public parks, who knows—maybe Libertin was going to litter his hammock?

I’m confused by these Chan tickets.  Are the Parks and Rec patrol officers just giving tickets to people they deem harming the park?  Or are they also handing out tickets to the 1000s of others drinking and smoking while also this is going on?  I know they crack down on the drinking at Dolores sometimes but wasn’t sure if this was related.

Scott Wiener’s vision of the park is as an uptight suburban kiddy park - so get used to it.

Yes, it’s really unfortunate how conservative the Castro has become.

I think this is in retaliation to the slack-liner crowd. They ruined it for everyone.

Your tax dollars at work.

Keep in mind that Scott Wiener recently added millions of dollars annually to the budget of Rec and Park, not for improvements or accessibility, but for more Rent-A-Cop Park Rangers like Chan who can follow you around and issue citations whenever any innocent activity behavior on your part can be misconstrued as a violation of park laws.

Thanks to control freak Wiener, we are wasting over $5 million per year on petty code enforcements, rather than basic services like adding trash pickup for popular parks.

Scott Wiener, Phil Ginsburg and Phil’s Spokesliar Sarah Ballard (married to fellow PR hack and former Newsom lackey Nathan Ballard) are obviously working overtime to sow hatred among the people of San Francisco by demonizing park goers and attempting to make us blame each other for the shitty services they render for their premium salaries.

Easy solution: organize and lobby for the firing of Phil Ginsburg, the single worst thing to ever happen to San Francisco public open space. And while we’re at it, let’s send control freak Wiener back to whatever rock he crawled out from under.

i was there on saturday.

the same parks and rec cops were hassling all the homeless people who were napping.

however, they didn’t issue any citations.

but hey, gentrified money ALWAYS brings its own security forces.

if you pour millions of dollars into “fixing” the park up, you can bet they’re gonna trounce the poor.