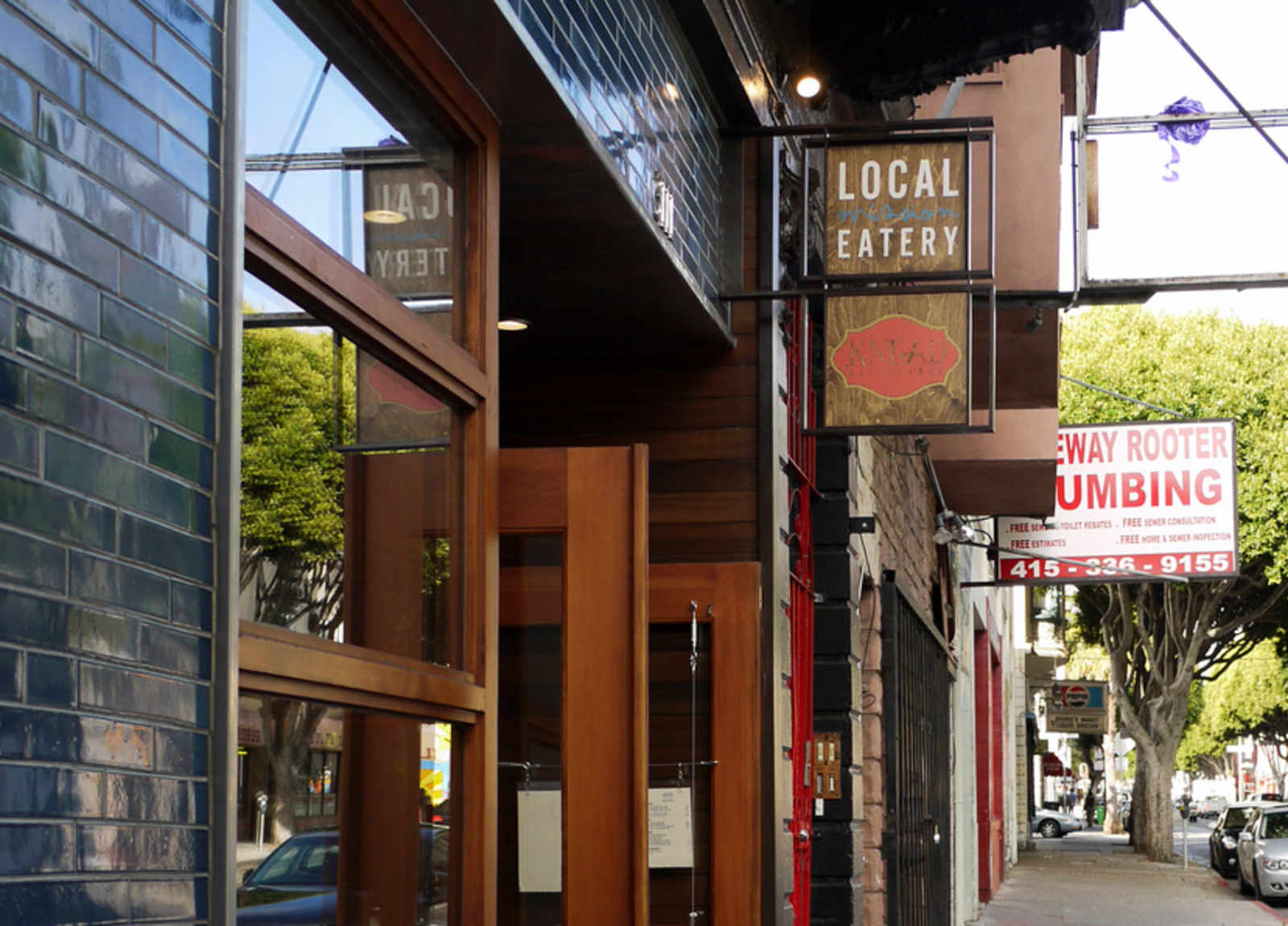 With Local: Mission Eatery, Local's Corner, and this week's opening of Local Mission Market and the announcement of Local Cellar, Yaron Milgrom's business empire continues to grow and make an impact on the neighborhood.  However, a string of complaints this year are beginning call his business practices into serious question.

According to a complaint filed in San Francisco Superior Court, Local: Mission Eatery's general manager “repeatedly harassed” server Ariel Rose “throughout the course of her employment,” despite the restaurant's owners being aware of the situation:

After “repeatedly complaining” about the harassment, Rose formally met with Milgrom on January 8th to discuss the harassment.  Five days later, she was fired.

The general manager was still posting to Mission Eatery's Facebook wall as of July 16th, suggesting he was not terminated.

The lawsuit also alleges other employee abuses, including:

According to additional documents related to the case, “settlement discussions [have] reached an impasse” and the case is scheduled to go to trial in April 2014.

The lawsuit precedes another controversy for the “Local” businesses.  In April of this year, a Latino family alleged Local's Corner refused to seat them despite having available seating, implying it was racially-motivated discrimination.  Yaron later apologized for the incident, saying he was “deeply sorry” and it was “a huge failure to enact our commitment to everyone with whom to interact.”

As the tipster who sent us the server's complaint told us:

I'm starting to actually feel sorry for Yaron, despite having his weird empire of businesses, he's kind of the most hated person on this side of the Mission. But the attached does not do any good for his image at all.

We agree—the attacks on Yaron and his personal property have been, at times, overwhelming.  However, if any of these claims prove to be true, it casts a damning light on the man's business practices and general ethics.

Neither the Milgrom nor Rose have responded to emails for comment, but you can read the original complaint below:

fuck this guy. he’s obviously a jerk and treats people like shit. I plan to go to his restaurant and shit on his artisan food.

This should be an interesting thread.

Because of the people who will come out defending sexual harassment? Yeah right.

the question about Milgrom and his business is why things related to his businesses are never discussed or reported upon by either the lamestream media outlets in this city or even the so-called alternatives. Milgrom worked as a columnist for SFGate, which assumes that the wet rag of the chronicle will not give anything like fair coverage, but where is the SF Weekly or the Bay Guardian????????

we are talking about a series of businesses that this year alone:

1) dismissed an employee after she approached the owner with concerns about sexual harrassment
2) were then sued for this harrassment
3) discriminated against a latino community activist and her family
4) took over a week to have anything like a dialogue with this activist
5) was complained bout to the human rights collition complaint
5) was the subject of a huge protest
6) has opened or is in the process of opening two new ventures, one of which is presumably the result of not being able to get a liquor license for the former

and why isn’t the city of san francisco taking anything seriously??????????

I was going to ask you a followup question, but you took all my question marks. Won’t anyone pay any attention to the question mark shortage. Have we already hit peak question mark.

When is this guy going to go away?

He will vacate on the 32nd of Never.

Your only Vote is with your Dollar.

True indeed. I have stopped going to his chain. I have my own reasons, mostly shitty service and high prices. It would be nice to his chain fold.

I think people in the neighborhood are just blaming Yaron for everything. It’s like a witch hunt. The staff are not racist and it was a simple misunderstanding that the people were not seated. I am Mexican and my family lived here before I was born but I like the improvements in the neighborhood. It feels safer. I think instead of targeting Business owners we should be upset about the legislators who allow landlords to evict people and for these laws to be in effect. Neighborhoods change and this was once a Irish and German area before it was hispanic. Also a disgruntled employee often says a lot of things that stretch the truth.

Amazed it took even this long for someone to blame the victim.

Yes, people are blaming Yaron for things he and his business have allegedly done. That’s not a witch hunt, nor does it have anything to do with your views about gentrification.

Ruby: Well, no. It was hispanic before it was German/Irish. The “Mission” in “The Mission” might clue you in there.

California used to be Mexico before the US stole it from them.

And California used be Spain before Mexico stole it from them.

And California used to belong to native americans before Spain stole it from them.

And California used to belong to mammoths and giant ground sloths before native americans stole it from them.

(continue until you reach single-celled organisms)

Stolen? It was part of a treaty. Whether you like the conditions of the treaty or the issues that surrounded it is a different discussion. But California was not stolen.

Whether or not you are ok with it being stolen is a different discussion. But California was stolen.

Also: Way to blame the victim, you creeper.

Cry me a trail of tears for Yaron; and your misunderstandings of who the indigenous people are to this area.

Also victim blaming?? Is that a requirement at your dot com right after ruby on rails..

gentrification is a repressive force that serves the dominant privilege power structures, why is anyone surprised the businesses doing the most to gentrify, there is SEXISM and RACISM?

Gentrification is driven by money, period. We’re lucky enough to be in an enlightened part of the world where sexism and racism are generally bad for business.

The one thing people seem to be forgetting ITT is that for the most part, other “gentrifying” local businesses have not had these types of allegations of racism and sexism. I’m not saying allegations are always true, but when they start to add up it certainly raises some eyebrows.

“is that for the most part, other “gentrifying” local businesses have not had these types of allegations of racism and sexism. ” how could you possibly know? Most of the people affected don’t have access to the media. I’m sure plenty of people have experienced shitty treatment.

Your use of all caps is gentrifying thing comment thread with its domineering power structures.

I was bored of this story by the third sentence. They all sound like idiots

And the BEST part about Ruby the victim blamer????? She’s Mexican! Ruby, you think by stating that you’re Mexican is supposed to somehow legitimize your point? Wack. By the way, were you present the moment when the Cuadra family got denied service? Does this mean you can explain that “simple misunderstanding” as if you were right there with them? I spoke with Vincent last Saturday about it who was actually there with his aunt Sandy, and he has a completely different take on it. But, seriously, do tell your perspective….

Ay dios mio…I can get when white people do the blaming, but gosh darnit, it especial boils my blood when a fellow Mejicana does.

I have still, after hearing from dozens of people’s account, heard any convincing argument that would allow me to believe that something racially motivated happened at Local’s Corner. We are supposed to just believe that the person working that day and also, the owners of the establishment, would for some reason not want to serve a family because of the color of their skin? Why?? How would this make any sense?? They were offered a table at the larger space on 24th Street, which no one denies. So, was there some name calling nobody knows about? This is all just a perception and because of it you will continue to demonize the businesses this man has in the Mission?

Bad and way to expensive!

I thought this was an article about sexual assault in the workplace. I fail to see why gentrification is being talked about here.

Seemed more like sexual harassment not assault, but the link seemed to be the believe that the inciednt of extreme behavior that goes beyond acceptable norms, correlation with that person violating other societal norms, . This create a tendency in the public to associate guilt when allegations are being made against someone who has behaved badly..

HOW DOES THIS RELATE TO PEOPLE BEING EVICTED?

Dude, your caps lock is stuck.

these people- we are finding out- are dangerous predators, more shit will come out soon.

What do you mean by “these people”?

SOME FOLKS STARTED A PETITION AGAINST YARON

Yaron is a slimey guy.hes known for pulling these type of things and it’s no surprise somebody got fed up enough to call him out. The staff are not racist-the chef / biz partner is a really good guy and it sucks he’s tied to yaron . Yaron is a shady business man and it had to catch up to him sometime. I hope everybody else pulls through this okay

I live around the corner and can’t stand this place. In fact I’ve been waiting for it to go out of business since I hardly see it packed with people unlike other, similar places in the Mission. To be fair, I’ve only eaten there once but the wait staff was rude and the food in my opinion was underwhelming and overpriced. Not to mention, despite the attempted cozy environment (bookshelves, succulents, ya know, hipster shit) the general vibe of the place just seemed kind of sketch.

The best part about Local Mission Eatery is Knead Patisserie’s pop up in the mornings, which I will continue to support.

Bookshelves and plants are ‘hipster’? Jesus your knee if jerking so hard I think you’re about to come. The chef who looks like he climbed out of a silver mine in 1849 is a hipster. Bookshelves? Not so much. Dumbass.

Did y’all notice in the media about local mission market that their plan for producing no waste is to use ingredients that haven’t been purchased sometime later in the restaurants? Nice freshness there! Hope ya choke on your 3 day old greens, ya foodie bastids!