As Bike Theft Increases 70% Since 2006, Supervisors Look For Ways to Curb Trend 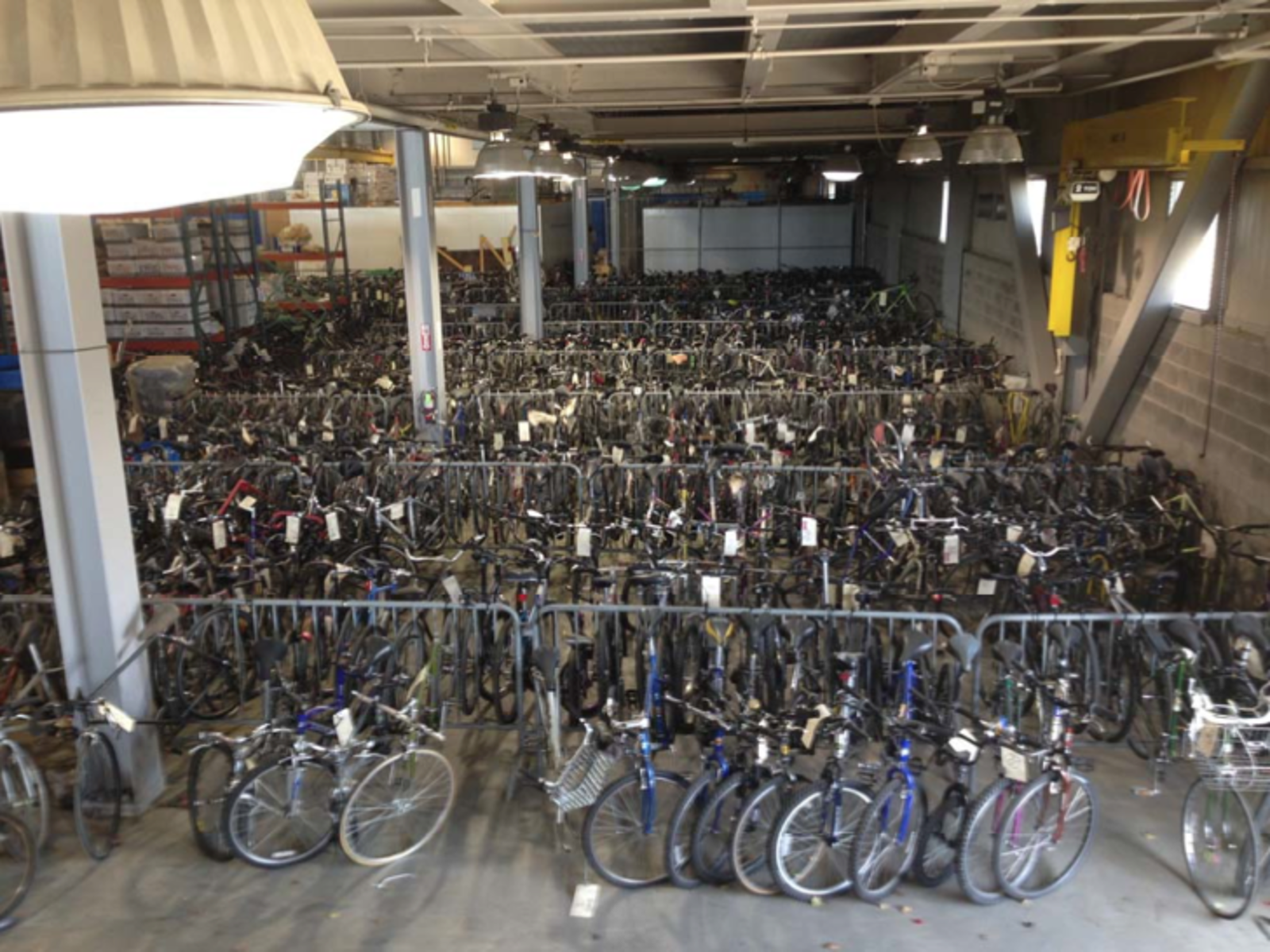 Unclaimed stolen bicycles recovered by SFPD.  SFPD holds onto the bikes for 120 days, before selling them at auction or donating them to charity.

The San Francisco Board of Supervisors has finally figured out something that we've all long known: bike theft is a serious problem in the city.  It's such an epidemic that a report issued by the Board of Supervisors Budget & Legislative Analyst revealed that the value of the city's stolen bikes topped $4.63m for the year of 2012, and the theft rate in the Mission's legislative district increased 348% since 2010.

In fact, bike thefts outpace iPhone thefts 3:1, despite—as the SF Bike Coalition points out—iPhone theft “has gotten widespread media and police attention, while bike theft has not.”  (To be fair, iPhones help us do disruptively helpful things like fling cartoon birds at cartoon pigs and summon cabs, whereas bikes are only useful for fun and transportation.  Also, iPhone owners relentlessly complain about everything (battery life, AT&T, font choices, BART laborers, Tartine's lines, the Giants' 2013 season), so the police quite understandably don't want to be the other side of that tsunami of tears.  But I digress…)

The report states that many of the usual factors are fueling the trend: insufficient secure bike parking, people not knowing how to properly lock their bikes, owners not being able to identify their stolen bike for police recovery.  But more concerning is the lack of SFPD enforcement, confirming that bike theft is a relatively “risk-free crime” in SF:

There is no central SFPD approach to bicycle theft. While individual SFPD stations devote staff and resources to investigating bicycle theft as well as attempting to reconnect recovered bicycles with their owners, other stations devote little to no time investigating such cases. This is largely due to competing priorities and insufficient staffing levels. SFPD staff report that bicycle theft is typically a lower priority when other, more serious crimes are on the rise.

But instead of merely recognizing the problem, the Board of Supervisor's are looking to do something about it.  Supervisor Eric Mar, who initially called for the report and has been the victim of bike theft himself, added a $75,000 line item to this year's city budget to create a voluntary bike registration database, making it easier for SFPD to track stolen bicycles and reunite recovered bikes with their owners.  Additionally, the report calls for SFPD to create a dedicated bike theft unit, increase enforcement in bike theft hot spots, increase the number of undercover “bike-bating” sting operations to catch thieves, and create an online database of stolen bikes so buyers can determine if they are purchasing stolen goods.

You can read the entire 25 page report here.

“In fact, bike thefts outpace iPhone thefts 3:1, despite–as the SF Bike Coalition points out–iPhone theft “has gotten widespread media and police attention, while bike theft has not.” (To be fair, iPhones help us do disruptively helpful things like fling cartoon birds at cartoon pigs and summon cabs, whereas bikes are only useful for fun and transportation. Also, iPhone owners relentlessly complain about everything (battery life, AT&T, font choices, BART laborers, Tartine’s lines, the Giants’ 2013 season), so the police quite understandably don’t want to be the other side of that tsunami of tears. But I digress…)”

I get the sardonic tone but isn’t it an issue of volume? Furthermore, bikes aren’t stolen out of someone’s hand; well, not the majority of the thefts, I assume. That sort of confrontational theft, the smash and grab, is probably much more jarring that not seeing something somewhere where you expect to see it - and I don’t mean to discredit or minimize the frustration a bike theft is and can be.

Anyway, that’s just a small piece of the post. I don’t want to derail before the comments even get started; “my theft is bigger than your theft” and the like.

Well, part of that was tongue and cheek (yes, I know iPhones do far more than play host to Angry Birds and Uber apps), but as someone who has had bikes stolen before (and iPhones stolen), I’ve always been miffed about the second-class treatment that cyclists get.

You have to consider: bikes are often worth far more than the few hundred dollars iPhones are and greatly impact your life if that’s your primary way of commuting. Also, many bikes are custom builds and often irreplaceable (my stolen bike was a custom Trek Project One… ain’t no way I was ever getting that back).

Maybe instead of spending $75K on a Google Docs Spreadsheet, Sup. Mar could encourage the cops could do a little more to suppress the open-air bike chop shops operating in SOMA. There are ratty RVs and box trucks parked on the street that are packed to the gunnels with bikes and parts, and guys sitting around dismantling things on the sidewalk. You don’t even need to get outta the cruiser to see it, fellas.

Yeah, I see that on Alameda st in the Design District all the time.

Always see them on 13th Street in the same area too, under the freeway. Dozens of bikes and three guys sitting around working on them.

Seems like the point here is so when the cops find a stolen bike, they know who to call to return it.

What is the information on that lead photo of the Costco of San Francisco stolen bikes? Where is it? What proof do we need if we recognize a bike. I didn’t bother talking to the police when mine was recently stolen, but if there is a warehouse to look through, I’d try that

Found it. The 25 page linked report covers this at about page 1-+ “Once a bicycle is in SFPD custody, it is taken to the SFPD’s Building 606 in Hunters Point for storage

If the cops sell the bikes and keep the $$ - why would they want to do any work?

Do their numbers sound right to you?

That the police recover abut 18% of bikes stolen?

And don’t people suspect that bikes are parted out. I’ve often seen bikes where parts of them are stolen.

Yeah, the stats on bikes being parted out would be interesting. Every rider I know has had it happen a few times, never reported (what’s the point?)

People vastly overestimate the power of individual supervisors. They can allocate funds, pound the table, etc. But this is much more in the mayoral wheelhouse.

so i’m guessing that whole baitbike thing the sfbc did with sfpd did not do anything? shocker.

SFPD and the BOS really need to start helping its citizenry. The theives are starting to get more and more brazen; stealing from people’s balconies, garages, hallways, and the like. Next step after ripping bikes off from garages is going inside folks’ homes, then sooner or later people are going to start getting hurt, either the victims or the perpetrators (which I don’t mind personally).

Bike community, lets cut back on all of the proper bike locking workshops and “locking up your bicycle safely and securley is the best way to prevent theft…” talk, bustin heads is the best way to prevent theft and our city needs to help us out a little more. The best way to encourage theft is to give criminals misdemeanors and letting em’ loose or acting like all the slags chopping bikes in SOMA and GGP are just a part of the urban experience. Taking an extra 20 minutes to thread a cable through every hole on the bike and carrying 30 lbs. of locks defeats the purpose of cycling for many people too. Lets go SFPD & BOS, start helping us out here.