Report: Bike Theft is a "Risk-Free Crime" in San Francisco 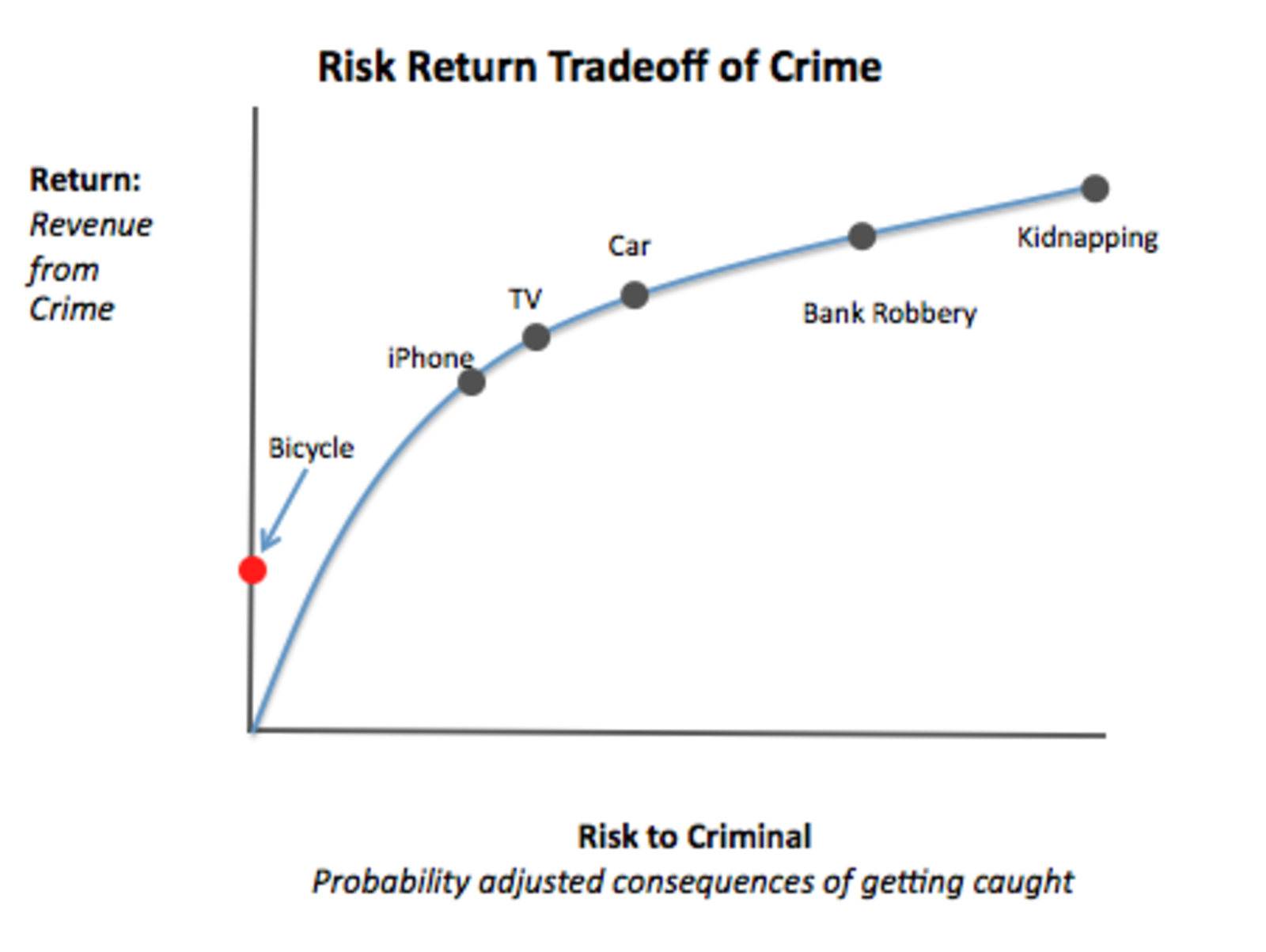 A few weeks ago, Priceonomics issued a report on bike theft that's worth a look:

It seems as if stealing bikes shouldn’t be a lucrative form of criminal activity. Used bikes aren’t particularly liquid or in demand compared to other things one could steal (phones, electronics, drugs). And yet, bikes continue to get stolen so they must be generating sufficient income for thieves. What happens to these stolen bikes and how to they get turned into criminal income?

It turns out using simple economic cost-benefit analysis mumbo-jumbo, stealing bikes is a very rational crime for someone to partake in if they want quick cash without risking prison—even if they have to sell the bikes for 5-to-10 cents on the dollar:

Criminal activity (especially crime with a clear economic incentive like theft) could therefore be modeled like any financial decision on a risk reward curve. If you are going to take big criminal risk, you need to expect a large financial reward. Crimes that generate more reward than the probability weighted cost of getting caught create expected value for the criminal. Criminals try to find “free lunches” where they can generate revenue with little risk. The government should respond by increasing the penalty for that activity so that the market equilibrates and there is an “optimal” amount of crime.

Using this risk-return framework for crime, it begins to be clear why there is so much bike theft. For all practical purposes, stealing a bike is risk-free crime.  It turns out there is a near zero chance you will be caught stealing a bike (see here) and if you are, the consequences are minimal.

There are a few great accounts of journalists getting their bikes stolen and then going on a zealous mission to try to capture bikes thieves (see here and here). In each account, they ultimately learn from local police that the penalty for stealing a bike is generally nothing.

According to Sgt. Joe McKolsky, SFPD's bike theft specialist, most thefts are performed by amateurish drug addicts looking for a quick score, “Bikes are one of the four commodities of the street — cash, drugs, sex, and bikes… You can virtually exchange one for another.“  However, more skilled thieves that cut through ulocks to get at thousand dollar bikes and likely shuttle their score down to LA, knowing full well that trying to sell them locally risks getting caught.

Read the full report over at Priceonomics.

For further reading on the rational criminal and economic approach to crime, see: http://chicagomaroon.com/2012/05/25/the-economics-of-crime-with-gary-bec…

So….i can trade bikes for sex? This changes everything. I’m headed to the hardware store to pick up some bolt cutters.

Hm - with a few stats on thefts of bikes, iPhones, cars, and people, we could calculate a Sharpe ratio for the Mission.

This sounds right- but I think they’re forgetting one other factor and that is the opportunity cost is really low. Even moreso than how much you can get for it, and how little you’ll be punished is the fact that bikes are literally everywhere for the taking. Thats a good blog.