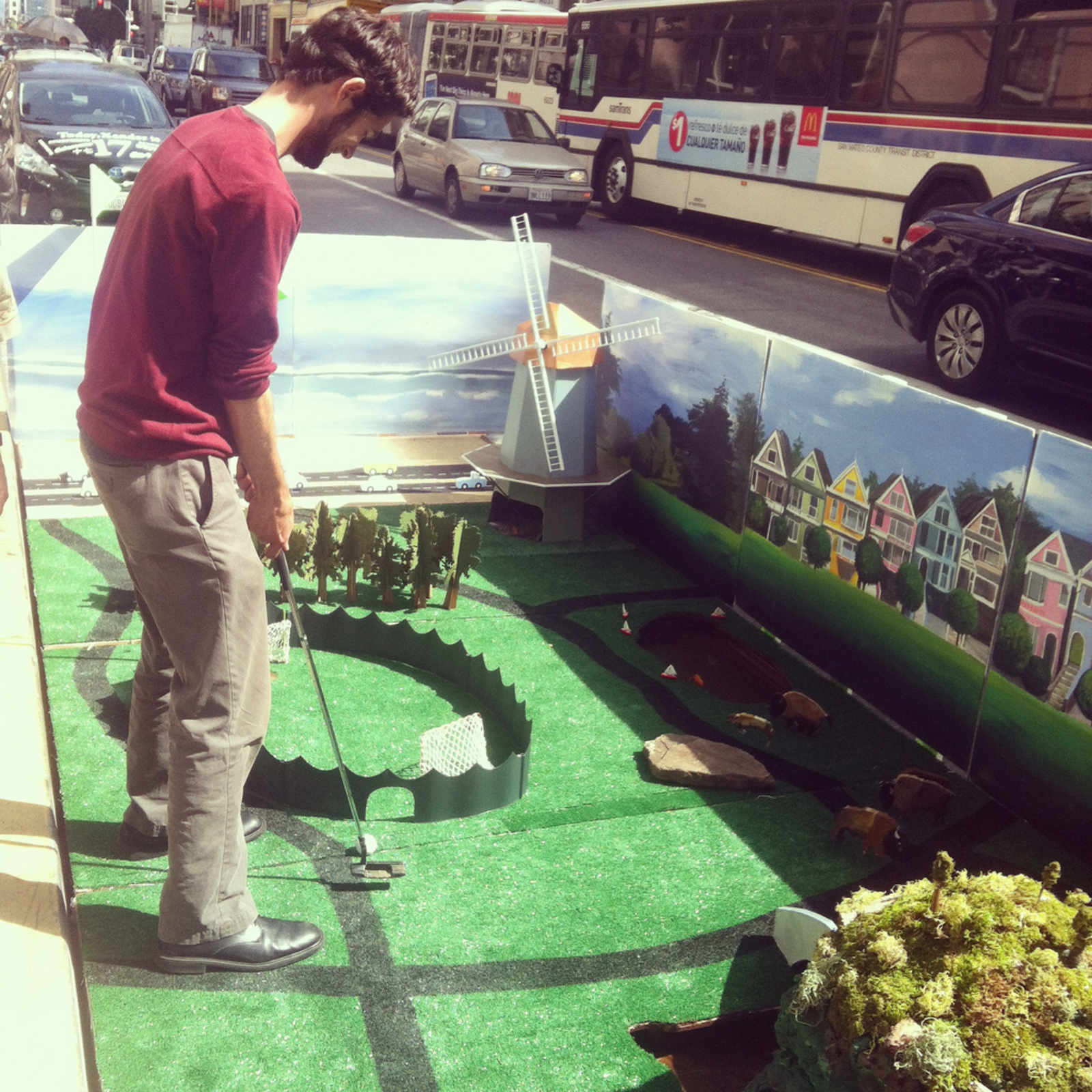 Born out of pop-up Park(ing) Day parklet, Urban Putt, a combination 18 hole mini golf course and restaurant, is coming to the big empty beige building at the corner of 22nd and South Van Ness. Inside Scoop reports:

Unlike mini golf courses in suburbia, Urban Putt won’t have a half-acre to work with. The space — 1096 South Van Ness — is a former mortuary, vacant since 1999, clocking in at about 9,000 square feet total, including the basement and the kitchen-to-be. The course itself will feature 18 holes, naturally, though Fox describes it more of a “jewel box of a course,” making creative use of the space with elaborate electronic and mechanical components.

It's being designed by the architect behind Mission Bowling, and the bar will be run by the Trick Dog guys, so this place is obviously no Bushwick Country Club (read: cheap).  Even so, it's great to see another bar doing something rad and unique in the neighborhood.

Anyway, they're angling to open later this year, but expect “red tape” might delay that until sometime in 2014.

Will there be a mini golf parklet too?

This is long overdue. Now someone needs to open a barcade and we’ll be set.

This building has been vacant forever though. I prefer this to the dance club that was supposed to go in a few years ago.

I have no problem with filling vacant spaces but this reeks of pretension. The people that will flock here will be awful.” In addition to the mini golf course, Urban Putt will also feature a full-service 70-seat restaurant and bars on two levels. The food will be “classic California comfort” with some familiar aspects, keeping in tune with mini golf’s inherently kitschy feel.

Fox isn’t a restaurateur by trade — he spent the last 35 years as an editor at places like CNET, PC World and more — so he’s surrounding himself with local pros. A well-known restaurant group is helping to consult on the food (a chef is still TBD), and the Bon Vivants are going to put together the beverage program.”

You should start a neighborhood business of your own.

Act on your passions and opinions rather than complain about what other people are doing.

Complaining relaxes me, if you bottle things up it destroys you. I would love to own a business in S.F. once I save enough money.

But won’t it be awesome to have another space for rich bros to hang out and eat tater tots? Seriously though what can you do, cities change and you can’t control what goes where.

Scum I agree with you…. these fucktards are really out of their skull.

What about the damn fat kids???

Will they be able to play putt putt too or will the dogs edge them out - AGAIN??

Should be a big hit with Zuckerberg and his ilk